Premarket futures on Friday were up on hopes of improved trade talks between the U.S. and China. Meanwhile, earlier last week, Chinese manufacturing came in weaker than expected as global and domestic demand cooled. While trade issues remain, the report was worrying because it indicates global trade conditions are not limited to China due to the global economic environment which remains tenuous at best. At home, this has spilled over into weakening demand for Apple products causing AAPL to trade -39.2% below its all-time high, or $674 billion, down from its peak market cap of $1.1 trillion, or a loss of $434 billion. Underscoring the weakening demand, the CRB Index had a weak bounce from January 2016 to May 2018 but has since rolled over. 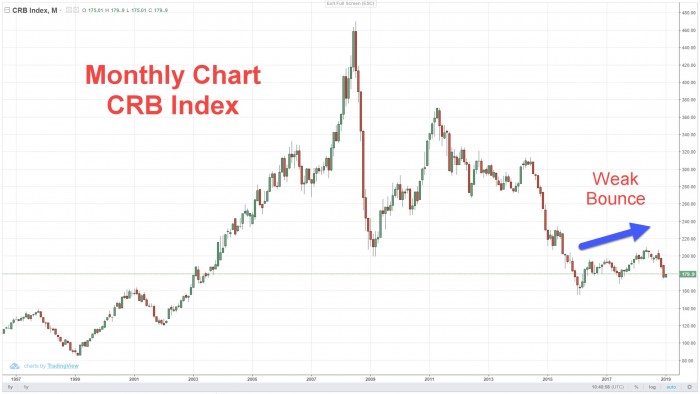 Only gold ETF GLD which is a fear trade of sorts has bucked the downtrend. 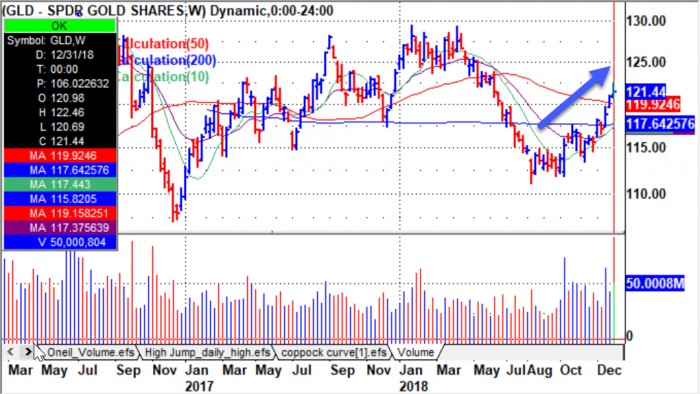 With situation at hand, the 20-year bond ETF TLT is trading at a 1 year price high while the interest rate on the 10-year T-note is at a 1 year yield low. 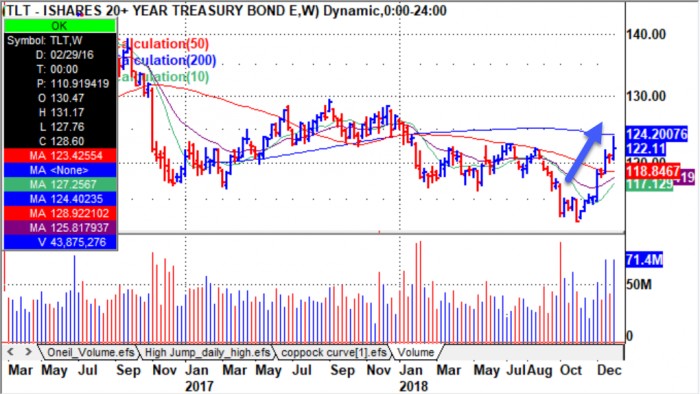 As capital flows back into bonds, this is both suggestive of fewer rate hikes for 2019 rather than the intended 2 or 3 hikes. Perhaps quantitative tightening by the Federal Reserve could be slowed or halted. Legendary portfolio manager Stanley Druckenmiller in a recent interview suggested the Fed only tighten their balance sheet if the data permits, rather than automatically tightening each month while the rest of the world either continues to print or puts off any tightening or interest rate hikes.

That said, Friday's jobs report gave the Fed a bit more breathing room as 312,000 jobs were added in a 10-month high vs. a forecast of 182,000. This was the biggest hiring in 3 years, diminishing fears of a slowdown. Hiring in November and October was also stronger than originally reported. Unemployment rose from 3.7% to 3.9% as the labor force climbed to an 18-month high as more people looked for jobs. It suggests more think work is easier to find. Strong hiring also pushed out the supply demand curve as the amount the average worker earned came in at $27.48 an hour, up 0.4%. This adds additional evidence that Trump's pro-business policies are taking form. As stated in prior reports, manufacturing jobs have soared, reaching highs not seen in several cycles. The 327,000 new manufacturing jobs over the last year represent the best 12-month stretch in 23 years.

That said, keep in mind that in prior recessions, the jobs numbers looked strong in the months leading up to the recession then would reverse higher on a dime as unemployment has a tendency to launch higher during such recessionary periods rather than take baby steps.

Recent market performance has suggested this could repeat if the market falls much further. As a consequence, Fed Chair Jerome Powell along with former Fed chairs Janet Yellen and Ben Bernanke said on Friday the right things to calm rattled markets, which had pushed briefly into bear market territory. Powell underscored the health of the U.S. economy but also expressed sensitivity to fragile markets given the nine interest-rate increases since QE ended in the U.S. He also said that the central bank would be willing to "adjust" policy if it disrupted the market or created adverse financial conditions, running against the central bank's statutory goals. Still, he remarked that "most of the hard data remain quite solid and suggest ongoing momentum going into 2019." Thus in standard politico-speak style, he's leaving the door open for more tightening but also a neutral stance or even easing if necessary. Yet rates remain well below historical norms when the Fed would normally begin tightening. Nine 25-basis point hikes from record low levels of interest rates put today's rates at just above 2% compared to historical norms of typically 5% and above.

At present, the major averages look like they are having a typical dead cat bounce. Despite Friday's good news with the majors up strongly, volume on the NASDAQ was lower than the prior day, and while volume on the S&P 500 was higher, it was only 7% above the norm. Confirmation days on both the S&P 500 and Dow Industrials have not worked in many years. Only the NASDAQ Composite confirmation remains valid but only when sufficient numbers of leading stocks confirm. In the current bounce, all majors have moved higher on relatively weak volume. Major stocks such as FB, GOOGL, and NVDA are all bouncing on low volume. So while the larger trend remains down, the market can chop higher as levels of volatility remain elevated. The VIX CBOE has been trading above 15 since early October, and typically above 20.

A positive resolution to the trade talks with China, lower bond yields, sufficient evidence of economic strength, and soothing words from Powell can put a temporary end to the current downtrend. But going forward, gains in the major averages may be scarce as suggested by both Druckenmiller and Ray Dalio as a number of bubbles remain in addition to mounting evidence of global economic troubles.

Thus even should the market serve up directionless chop and slop as we saw for much of 2018, undercut & rally patterns showed themselves to be profitable on balance, prior to the correction that began in October. Should the market go trendlessly cold as they did in the mid-1970s, volume dry up patterns can work well. Should the market continue its slide, short positions can generally be profitable. And should the market decide to stage a decent uptrend, our Focus List which still has zero names on it, a first since we launched this website in 2010, will most likely become populated. Of course, should a name with fundamental and technical strength emerge regardless of the market environment, it would also likely make it onto our Focus List.