Major averages gapped up through their respective 200-day moving averages on Friday, finishing the day higher on mixed volume as a trifecta of tech juggernauts, GOOGL, AMZN, and MSFT, gapped substantially higher at Friday's open. The Federal Reserve meets this coming week though CME FedWatch puts the odds of a rate hike at just 6%. Indeed, global economic weakness set both the European Central Bank and the People's Bank of China on a course of additional monetary easing, sending markets higher.

The number of actionable names with pocket pivots and buyable gap ups emailed to members in real-time continues to grow as the uptrend appears intact. Major indices which are a few percent away from reaching new highs may stall out, much as they have done this year, but for now, the path of least resistance has been up.

That said, the US markets have had two major corrections since 2009, and, after such corrections, it took the markets a number of months of retesting lows before they resumed their uptrends: 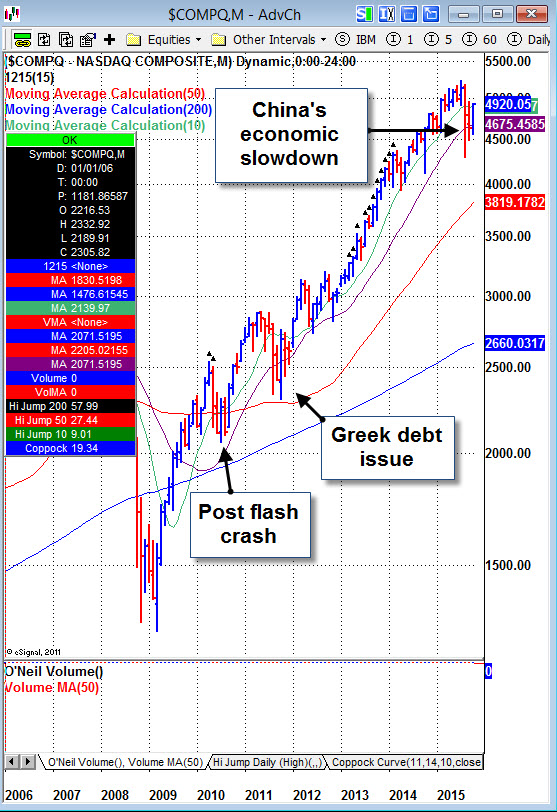 So, as always, pay close attention to your stocks, keep stops tight, and take profits where you have them in context with the chart and the general market. That is how money has best been made over the last couple of years.

The Federal Reserve concludes its 2-day meeting this Wednesday. We are in a massive debt bubble via the QE-morphine drip which began in late 2008. The Fed has painted themselves into a nightmare, though they can get very creative with respect to putting off the inevitable by way of creative QE. Indeed, the IMF and the rest of the world is hoping they will not raise rates anytime soon because it will wreak havoc over foreign debtors and emerging markets who borrowed in dollars.

The inevitable does not mean automatic default. History is littered with examples of powerful governments such as Italy in the early 20th century who, facing serious default, simply extended the maturity of their bonds so a short term note became a long term bond (!) while others such as the UK in the early 1930s suspended all debt payments until 1963, thus making almost no progress on reducing their debt during these periods. Naturally, this had a crippling effect on their economies and their currency which is "backed by the full faith and credit" of their respective governments.

We have been asked whether the inevitable could also mean the eventual onset of hyperinflation in the US as money printing runs amok. The quick answer is there is no chance of this happening in the US at this time. Hyperinflation occurs when confidence in government collapses so people start using the currency of other countries. Numerous examples abound such as Germany in the 1920s, Zimbabwe in the late 1990s, and Venezuela today. The respective government then prints more and more money to make up for the collapse in demand which further devalues its currency, a vicious spiral indeed.

That said, the US remains the tallest standing midget. Thus for hyperinflation to occur in the US, other countries would have to be stronger which they are not. That said, China is a major contender and stands, over the coming years, to potentially dethrone the US dollar such that the world's sovereign currency is transformed from the dollar into the yuan. But such a scenario, when it occurs, is still a number of years off.

So in the meantime, as further erosion in confidence in the euro and in certain emerging markets progresses, the US dollar remains the safest place to put money which explains its strength relative to other major world currencies. Of course, know that "safe" is relative and black swan events have occurred numerous times over the last hundred years. It was only several decades ago when Roosevelt ordered all Americans to turn in their gold for $20.67/oz. The US government then repriced gold at $35/oz, a clever way to boost tax revenues while devaluing the dollar. The FDR government then criminalized the possession of gold with up to 10 years in prison for anyone caught with more than $100 in gold. So, based on numerous historical examples, if you think a restructure of bond maturities or a moratorium on debt at some point is too far fetched, think again.