Plunging stock markets and crypto markets have been the way of things lately. It could be argued the drop in stocks has left many retail investors feeling less wealthy thus has caused additional selling in bitcoin, similar to how retailers jumped on board bitcoin in late 2016 after the Presidential elections in anticipation of continued higher markets due to the election of a pro-business friendly President. Nevertheless, I have published a number of times this year that bitcoin has remained and continues to remain overvalued even with the recent selling based on several metrics that have helped me call major tops and bottoms in bitcoin since 2012. But shorting bitcoin still remains a challenge as such exchanges that offer shorting platforms are often illiquid and questionable. Selling CME bitcoin futures contracts on the other hand have been one alternative to profiting handsomely from the drop in bitcoin.

Based on bitcoin valuations ($3600), it still could easily fall another 33%-50% before a major low is reached. Part of the issue is that if history is any guide, not enough people are throwing in the towel and giving up and declaring blockchain dead. In the past, once the majority made such declarations along with mainstream media, with the price of bitcoin plummeting such as it did down to 170 in Jan-2015, or 63 in Jul-2013, or 2 in Nov-2011, that was the major low, always coinciding with record trading volumes along with a number of other metrics such as the network value to transactions ratios.

Meanwhile, development of blockchain across many platforms continues at breakneck speeds despite the crypto winter simply because blockchain increases transaction speeds while reducing costs across many platforms while being transparent, immutable, and, in some cases, can address privacy issues such that Facebook-type invasions of privacy become a memory. Bitcoin remains the only truly secure, decentralized, sovereign and censorship resistant coin whose Lightning Network just succeeded with tens of thousands of micropayments in record time. Other bitcoin technologies such as Liquid sidechains and Rootstock which enables other companies to build on the bitcoin network are just launching. A competing protocol, Stellar, can now transact at 3-times the speed of SWIFT.

Blockchain remains an exponential grower which is the beating heart of bitcoin. Bitcoin remains the only decentralized coin that remains true to its original script unlike ethereum. Bitcoin also has the network effect, much like TCP/IP which  became the protocol of the internet, despite superior technologies at the time, due to having achieved a network effect. Bitcoin's killer app is store-of-value as it enables a peer-to-peer transfer of value. Since 1998 with the downing  of Napster, governments have tried in vain to suppress p2p bit torrent file sharing, but for every "pirates bay" knocked out by the courts, 10 new ones are born. Some 25% of total internet traffic today is bit torrent file sharing though platforms such as iTunes and Netflix, which offer suitable alternatives, have reduced the need for people use bit torrent, though it still remains a huge factor.

As for the crypto bubble, as I've illustrated with three balloons, take a balloon that pops, which is the equivalent to every bubble in the history of bubbles before bitcoin. None ever inflated again except for the dot-com bubble where the NASDAQ Composite lost 87% of its value before reinflating. After the bubble burst in the year 2000, most dot-coms died while only a few such as Amazon and Ebay survived and thrived. The dot-com balloon then slowly reinflated over time, and the internet is where it is today, arguably one of the most game changing inventions in human history.

But what about blockchain? Take a balloon that deflates losing between 80-94% of its air over time before reinflating. The value of the blockchain space has done this several times since 2010. Each time the balloon increases in size than the time before. But just as with dot-coms, here's the issue. The air in the balloon is just air, just as most of these blockchain ICO companies are built on air, or on vapor as some have said. And companies built on vapor get vaporized, just as we saw with the dot-boms post 1999. Only a few companies contain helium or hydrogen which allows the crypto-balloon to soar.

The balloon that represents today's stock market is largely made up of air. Most of the rise in the stock market since 2009 was primarily due to P/E (price/earnings) expansion due to QE which pushed interest rates to historical lows over the past 5000 years as well as debt to highs not seen since World War II. 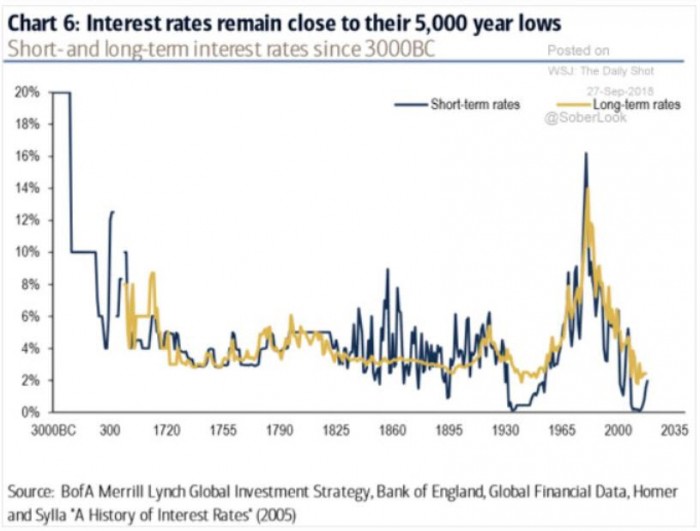 The Federal Reserve is expected to raise rates again this December then two to three more times in 2019. The core PPI has moved up from under 2.5% to over 4.5%. Higher inflation will result in higher interest rates. If the Fed continues to hike as planned, expect further shrinkage of P/Es. Rising bond yields will also drain money from the stock market as they become more attractive as investments vs. stocks. This increases the odds of the first real bear market since 2008.

So the question remains whether Trump's pro-business policies are enough to keep GDP growth robust. Are existing technologies together with less regulation and lower taxes enough to spur growth? Post 1945 is one such example where debt levels exceeded today's debt levels, yet the U.S. was able to grow its way to higher markets after World War II.

Trump recently requested the Fed to lower rates due to the recent stock market selloff. If the Fed were to stop or slow rate hikes and the trade war was resolved along with what the market perceives to be healthy GDP growth, this could help prop markets once again as QE capital which continues to flow strongly finds its way into U.S. markets. But until then, bearish fear, uncertainty, and doubt has taken hold.