Elevated levels of volatility continue thus making this far more a day trader's market until the dust settles. The situation with China as we have said remains in flux, and a flattening yield curve causes stress to investors as some yield curves but not all that invert predict recession. Of the ones that correctly predict recession, the timing can still be several months off or longer, thus the market has time to continue to move higher in the meantime. This was the case in 2006 when the yield of the 30-year dropped below the 2-year at the start of 2006. But this was 2 years before the financial collapse, making use of such indicators to time markets questionable at best. In the current market, this has not yet happened but the differences in yield continue to narrow.

Inverted yield curves can suggest investors are concerned enough about rising interest rates that it makes sense to avoid the longer-term because they'll drop in value at a much faster pace in that higher rate environment. Thus demand for the 2-year rises until investors think rates have peaked.

Of the inversions that do not predict recession, it is invariably due to other forces at play. For example, in today's market, the question is whether Trump's pro-business policies are sufficient to keep the U.S. GDP at healthy levels even while the rest of the world remains economically weak. It is a unique situation since quantitative easing by global central banks remains near record levels which props the U.S. stock and bond markets. This tailwind has been a prime reason why this bull market has lasted since 2009 when QE began in earnest, first in the U.S. then in other parts of the world. So even though the U.S. ended QE a few years ago, it still benefited being the tallest standing midget due to QE from global central banks.

Thus there are two major tailwinds at play: 1) Trump's business friendly policies, and 2) global QE. One headwind is Trump potentially being too heavy handed with China though this would only impact U.S. GDP by a marginal amount according to various analysts. Trump being a staunch businessman would certainly not induce a sharp drop in GDP if going too hard on China would create such a situation. But another headwind is rising yields which will continue to drain capital from stocks.

Now while I recently mentioned that a major endemic bubble such as the one that created the financial collapse of 2008 does not seem in the offing, there are a number of smaller bubbles which could create headwinds going forward, thus I would agree when Ray Dalio of Bridgewater who runs the largest hedge fund in the world, suggests the stock and bond markets could have a bit of a struggle in the years ahead. 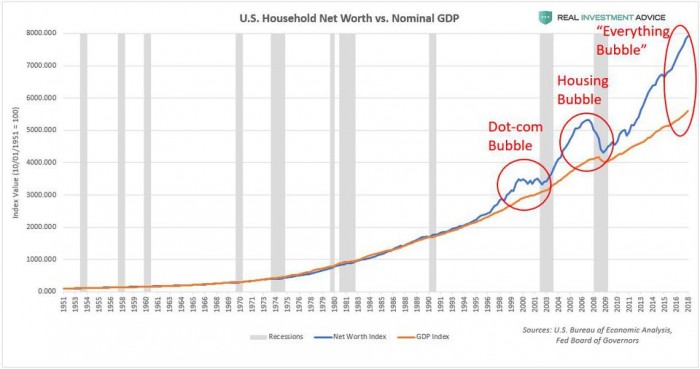 The underlying drivers of the current bubble are the U.S. Federal Reserve-driven bubbles in stocks, bonds, and housing prices, thus some have called the current bubble the 'everything' bubble. Back in 2008 during the housing crash and Great Recession, the Fed was so desperate to create an economic recovery and bull market that it decided to do so via the brute force of monetary policy. It cut interest rates to record low levels by pumping trillions of dollars worth of liquidity into the financial system which is known as QE. The S&P 500 consequently soared by over 300%.

But technology has enabled productivity thus wealth to grow thus widens the disparity between household wealth and GDP. In addition, nascent technologies such as blockchain will greatly reduce friction by lowering costs while raising efficiencies, enabling yet more wealth to be created. Thus perhaps this bubble can be contained without creating a huge issue.

Here's another bubble: After nearly a decade of QE, the U.S. stock market is as overpriced relative to its fundamentals as it was at major historic peaks such as in 1929 and during the dot-com bubble. According to the CAPE ratio which is the cyclically adjusted PE ratio, the U.S. stock market is more overvalued than it was in 1929 though still remains below the spike it achieved during the dot-com bubble. 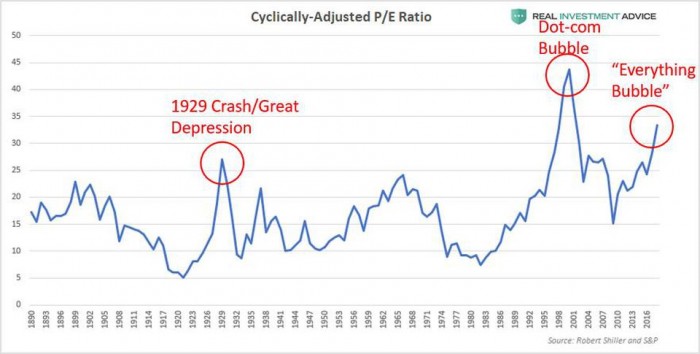 Thus once again, it is possible rising levels of productivity due to technological innovations can enable higher PEs, higher household wealth, and a greater disparity between the top 1% and bottom 90% without creating a collapse since a rising tide lifts all boats, compared to the business-crippling FDR New Deal policies of the 1930s which kept the country mired in a serious depression for many years, lowering the tide for all. That said, Dalio's projection of struggling but not collapsing markets could be the case going forward. But once again, rather than trying to predict a future which does not yet exist, it is best to watch one's stocks for logical, low risk entry points while keeping stops tight, especially in these less forgiving markets.