A closely watched yield curve inverted for the first time since 2007 sending markets lower on volume. The 3-month T-bill yield rose above the 10-year T-note yield. The last 3 times this happened, we had a recession. That said, this does not guarantee a recession this time around since the material factor is unprecedented levels of debt monetization, ie, QE, that has, is, and will continue to take place for the foreseeable future. This could have the intended effect of delaying a recession.

Nevertheless, the U.S. Federal Reserve is seeing slower growth ahead, underscored by its dot plot which showed no more rate hikes for 2019 and maybe one in 2020. It sees GDP at 2.1% down from 2.3% for 2019. Markets initially rallied on the news as it implied a perpetually dovish stance by the Fed. At this rate, depending on how the economy runs, future fed meetings may show a dot plot with no rate hikes and even an easing…or two. The fed-fund futures market currently shows a 57.9% chance of at least one rate cut by Dec-2019.

The new language in the statement reflects the realization of an economy that is less than robust as there has been a downturn in various measures such as household spending and business investment. Thus quantitative tightening (QT) is becoming a distant memory.

The Bridge Is Out

Market Wizard Tom Basso uses the bridge-is-out analogy to describe the economic train that is headed down a perilous path. Starting with George HW Bush, U.S. debt has steadily increased regardless of who was president, from Clinton to George W Bush to Obama to Trump. Note, the graph below is linear so debt appears to be accelerating. This is one way to trick the eye. On a proper log plot, debt would appear more linear thus would be a more accurate way to depict debt as it has not been accelerating but nevertheless, steadily progressing. 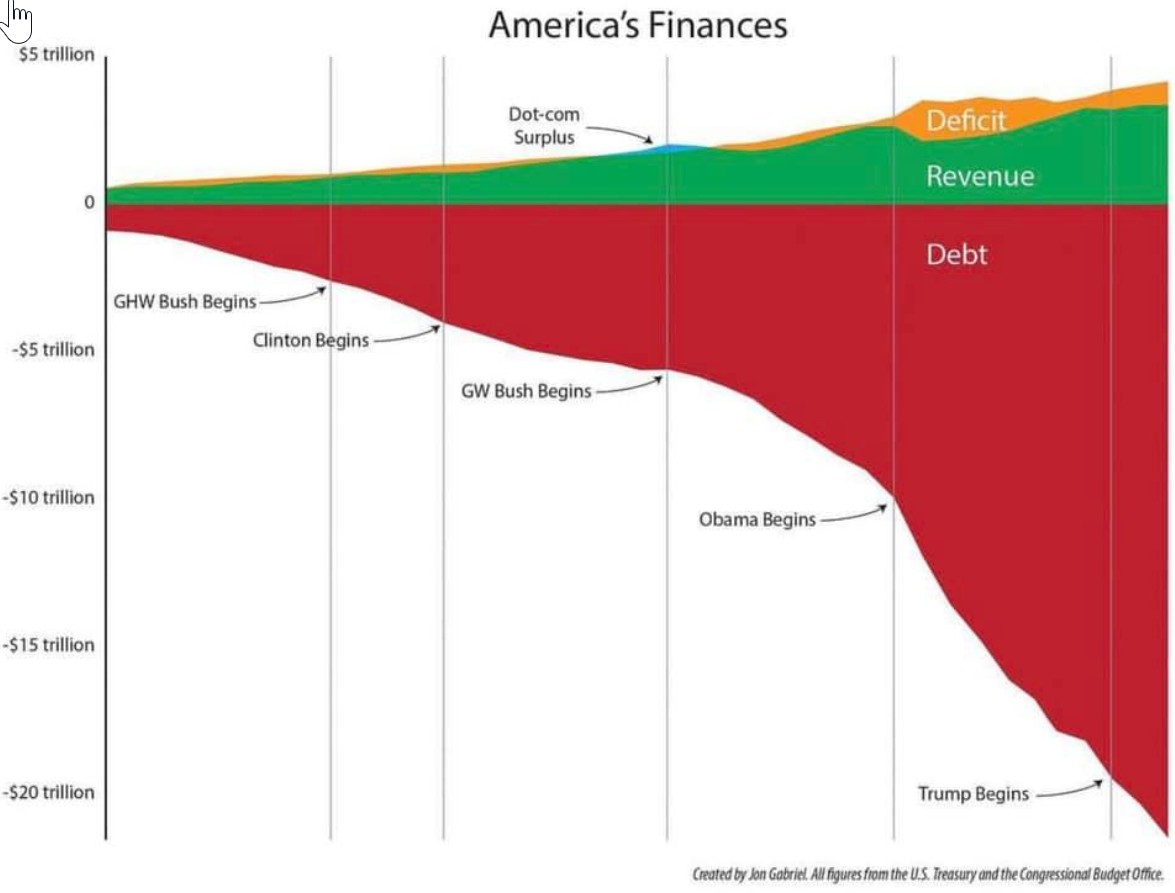 So despite all the jawboning from the Federal Reserve since George HW Bush was president, it is just words, and words are worth the paper on which they are printed (or not even that if they’re digital). The mandate was, is, and will continue to be to depreciate the U.S. dollar slowly by monetizing debt which increases the overall debt load. While some would say this has the effect of increasing wealth for all over a long span of time since the standard of living has risen over the last hundred years, the standard of living has risen despite the devaluation of the dollar via debt monetization. This is due first and foremost to technology which has made things more efficient at less cost.

While the central bank money printing mandate could be argued to slow the progress that would have been made without such intervention, one of its prominent side effects whether intentional or not is to enrich the upper percentile via stocks, bonds, and hard assets, and as a consequence, given enough time, the benefits trickle down to the lower percentiles.

Certainly, it has staved off any major or prolonged bear market since 2009. With central banks printing en masse, this bull market may have yet further to run as their mandates have painted them into a corner. How much longer will this bull go? Perhaps another year or more, but with more reluctance if market legends Ray Dalio and Stanley Druckenmiller are correct in their assessments.

But we are not here to argue politics or mandates. One may observe the revolutionary impact the internet has had on societies. Blockchain is arguably at least as evolutionary. Singularly, some of the smarter minds have noted how blockchain will revolutionize finance. The renowned Naval Ravikant has said 90% of jobs on Wall Street will be gone in 7 years. At the breakneck pace of development which seems like a trickle for the time being since the cryptospace is still young, thus the impact not yet felt, the effects will be felt in the years to come.

The Wall Street Journal did a recent piece on Bitcoin entitled “Bitcoin Is in the Dumps, Spreading Gloom Over Crypto World”. Despite the pessimism in the title, even The Wall Street Journal is no longer completely denigrating and criticizing the space. If you retrieve most all of their articles on Bitcoin and the cryptospace prior to 2018, you can see for yourself. Perhaps a change of heart has happened much as JP Morgan’s Jamie Dimon has softened his tone considerably since calling Bitcoin an outright fraud. He has admitted that blockchain is a worthwhile technology. In fact, when Dimon first lambasted Bitcoin, traders at JP Morgan were buying it as its price dipped on Dimon’s remarks knowing it would rebound. Dimon made a recent remark that if Bitcoin works then we'll do something there too.

All that said, Bitcoin could easily meander higher as it did a few times in 2018 then roll over again. But as always, just as with stocks, it is best to take things in real-time, day to day, staying in the present. There are indications that Bitcoin already hit a major low, and is now on a slow, upward trajectory. I emailed out a Crypto Report on this topic over the weekend.