by
Dr. Chris Kacher
Key Metric Sagging
Three-fourths of the global economy as measured by GDP will experience a slowdown this year. One key metric is the global smartphone industry. Shipment volumes were down 6.6% YoY in 1Q19, according to new data from the International Data Corporation (IDC) Worldwide Quarterly Mobile Phone Tracker.
Major smartphone vendors such as Samsung and Apple recorded the sixth consecutive quarter of decline with the slowdown accelerating. At the heart of these high-tech handheld gadgets, are microprocessor chips that serve as the central processing unit. Earlier this week, a report from the Semiconductor Industry Association (SIA) warned of a 13% drop YoY in 1Q19 in chips. The IDC quashed hopes of a 2H19 rebound in China, indicating their smartphone industry will likely be "challenged" for the remainder of 2019. The issue was not the trade war but rather the downturn in North America. Indeed, US smartphone shipments declined 15% YoY during 1Q19 as replacements rates slowed.

The deterioration in smartphone sales forced juggernaut LG Electronics in South Korea last month to suspend all smartphone production in the country. The drop in smartphone and semiconductor chip demand is a sign the global economy is slowing. 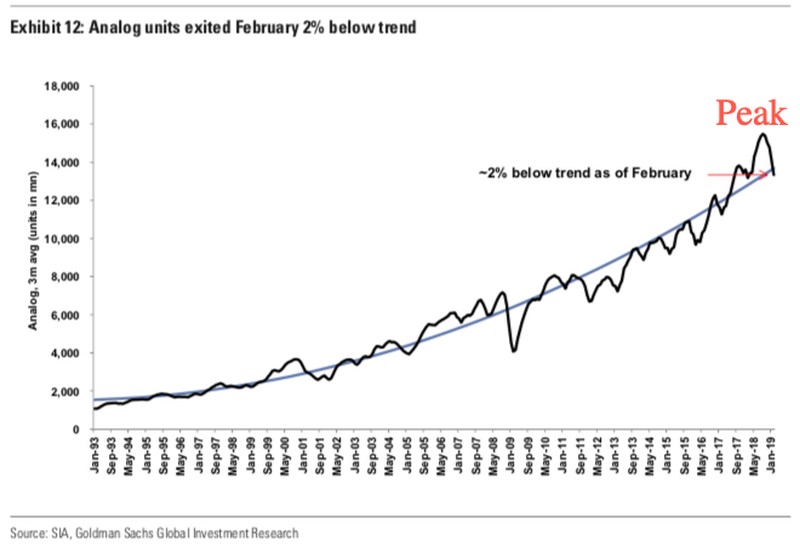 Further, the global economy in terms of trade volume is heading lower. As shown below, should the situation worsen, it is likely to be met with new rounds of global central bank easing. 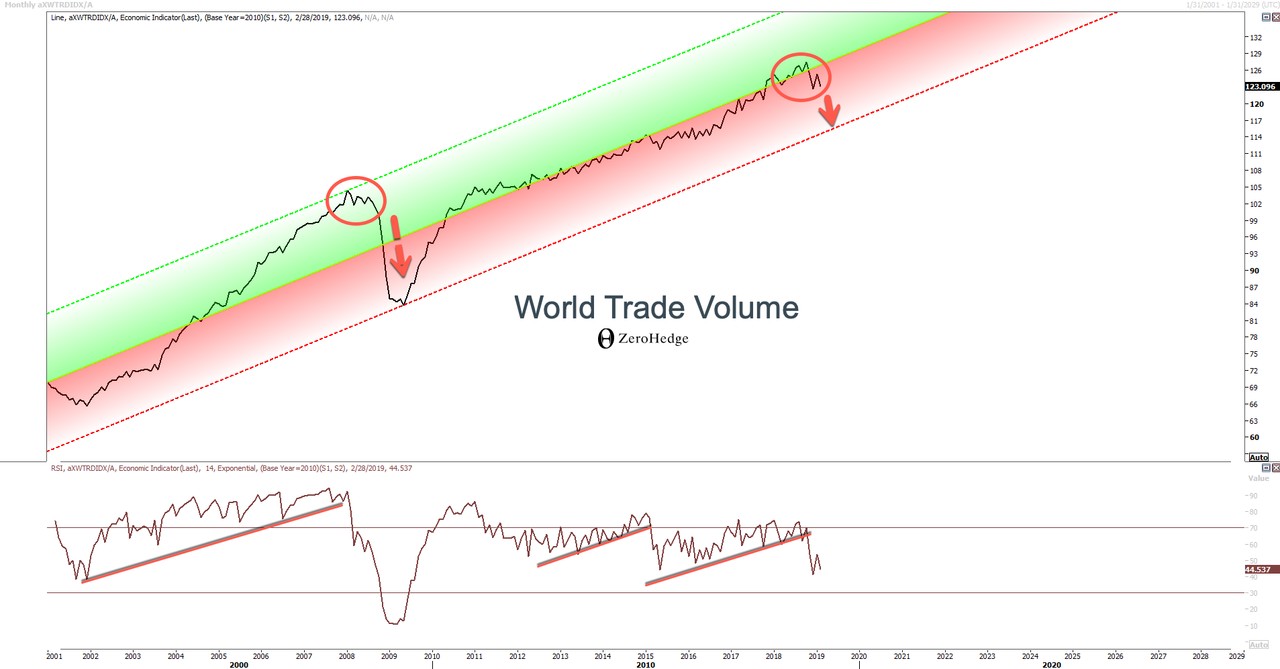 U.S. vs. China? Freedom vs. Control? Good vs. Evil? Perhaps, though one could just say it's cultural differences as politics is downstream from culture. Certainly the citizens of a country may be vehemently opposed to their government so to make a universal assumption about the people is a grave, shortsighted error. Certainly some may be opposed to China's nascent but growing use of AI bots to track facial expressions in public places which can lead to a reduction in one's "credit" scores. Standard in a country whose ideology believes that total control of its population eventually guarantees a social utopia, never mind that such control goes against the very nature of human beings. Blockchain by contrast promotes cooperation over competition, freedom over control, open source over closed systems. No wonder China has attempted on numerous occasions to illegalize various facets of the cryptospace.

Beijing vowed to retaliate. In a statement, the commerce ministry said Beijing “deeply regrets” the increase and said they would “have to take necessary countermeasures”. If China responds by raising its weighted tariffs on $60 billion of U.S. goods to 15% from the current 7%, that could reduce U.S. GDP by 0.1 percentage point. A full-blown trade war would shave off 45 basis points from global economic growth, while China's GDP would take a hit of between 1.2% and 1.5%.

For his part, Morgan Stanley's head of U.S. public policy strategy, Michael Zezas, wrote that while his base case expects China's GDP growth to recover to 6.5% in the second and third quarters, a U.S. tariff hike could cut that estimate by 0.3 percentage point. 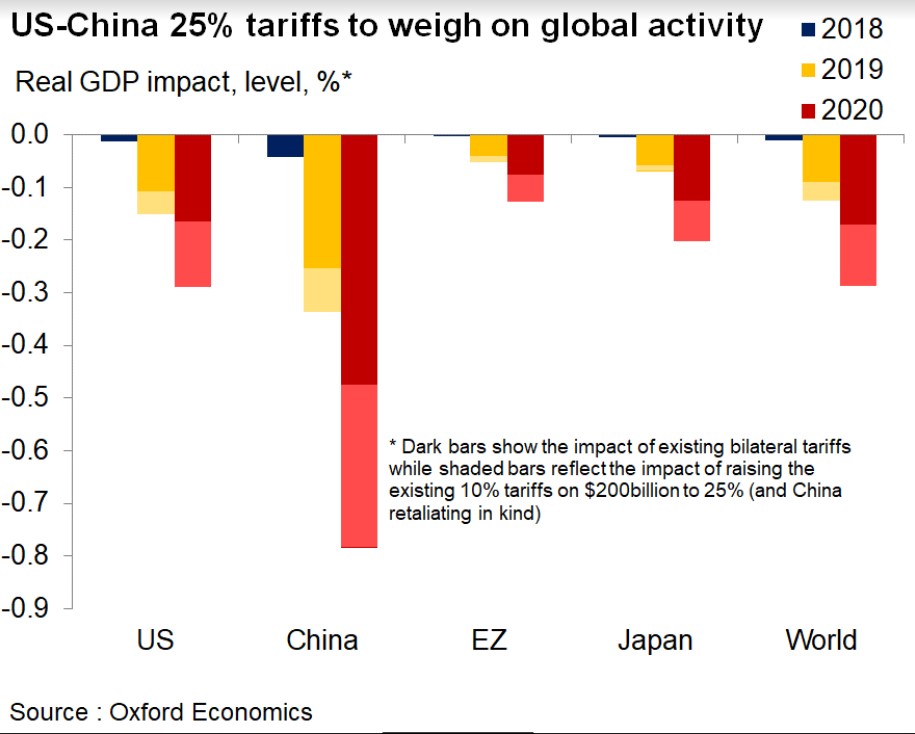 The somewhat subdued response of the markets to the tariff increase may be due to the “grace period”, which means the 25% duty will not be applied to cargoes that left China before 12:01am on Friday. Goods that left Chinese ports and airports before midnight will be subject to the original 10% duty rate and are only applied once those cargoes arrive in the US, effectively meaning there is a window of about three weeks before the tariff comes into effect.

In the meantime, both sides know trade wars hamper growth thus despite the posturing, both sides would like to see a resolution to the situation.

Any continued turbulence between the U.S. and China could be mediated by the Federal Reserve by lowering interest rates as suggested by analysts. Certainly, that has been the clarion call since 2009. Thus, the bounce observed in the markets last Friday suggest that while markets could reach lower lows from here, the overwhelming effect of QE since 2009 has been to truncate any market downturn. Markets have fallen around -20% at their worst levels three times since QE started in 2009: Oct-2011, Jan-2016, and Dec-2018. These sharp drops were always followed by fast rebounds as the Federal Reserve would step in and either offer a new round of QE in some form or tell the market what it wants to hear in the promise of additional QE should conditions worsen.

QE Secures Reelection
Trump knows this thus can afford to risk a prolonged trade war with China. He understands that QE will secure his reelection since voters have always voted with their pocketbooks. In other words, as long as the markets continue higher as a result of QE, his place as a second term president is secured. Meanwhile, the U.S. markets, not China, will continue to be the biggest beneficiary of all this liquidity circulating in the system. Indeed, note the substantial performance differences between the SPY (S&P 500 ETF) and FXI (Chinese big cap stock ETF) below. Since 2015, the S&P 500 has roared ahead, up nearly 50%, while the Chinese stock market has gone nowhere.