Due to the ongoing trade war between the U.S. and China, it is feared that Chinese companies will suffer weakening profitability. This could force Beijing to depreciate the Chinese yuan to absorb the shock of U.S. tariffs. Guo Shuqing, China's top banking regulator warned against short-selling the yuan saying short sellers would "inevitably suffer a huge loss."

Famed and legendary investor Jim Rogers said he typically shorts the currency in question in such situations. He says that proclamations by government officials and the like are meaningless.

Stock markets are certainly uncomfortable with what is transpiring between the two nations as major averages fell below their respective 200-dmas. Meanwhile, the Chinese stock ETF FXI has plummeted well below its 200-dma. A trade war is never good for markets at least at the real-time point of impact. China has given a stern warning to the U.S. that it will take retaliatory measures as necessary. China has given such warnings to other countries twice - once in 1962 before China's border war with India, and once in 1979 before the China-Vietnam war.

Nevertheless, Friday's Chinese manufacturing data in the way of factory activity for May shrank more than expected, spurring fears of an accelerating global economic downturn. Then on June 10, Trump promised to place a starting 5% tariff on all Mexican goods exported to the U.S. which increase 5% each month until the country takes measures to stop immigrants from crossing the American border. Combined with Trump's newly slapped tariffs on Mexico, the worry is the EU may be next on Trump's list.

A number of people have written to me on various platforms, especially bitcoin and blockchain groups, about their concerns of a deep global recession, endless QE, and what this means for hard assets, stocks, bonds, gold, and bitcoin. TLDR: All of the above should benefit. 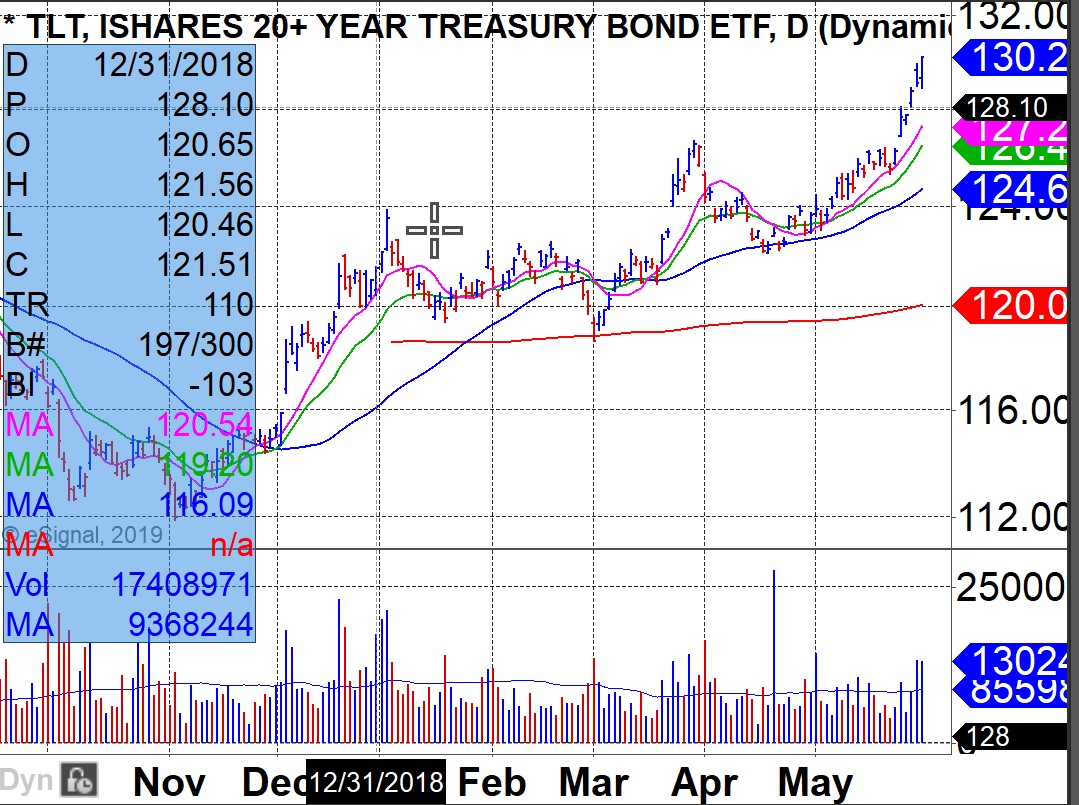 An inverted yield curve begins when bonds of shorter duration, say 3 months to 2 years, are yielding more than bonds of a longer duration, say 10 to 20 years. This week, the 10-year Treasury yield fell below the Fed Funds Rate. But the slow motion 'black swan' here is QE which has kept the world's tallest midget, that being the U.S. stock and bond markets, plugging along since 2009.

As long as major central banks around the planet continue to print near record levels with the ability to increase the flow of QE should economies deteriorate further, U.S. markets should continue to reap the benefits. That said, concerns this QE-driven stock market bubble will blow apart is not misplaced though may still be another couple years off, if it even happens. Bubbles often grow far larger than anyone's guess. Remember 1997 when Fed Chair Alan Greenspan made his infamous "irrational exuberance" speech about the lofty levels of the U.S. stock market?

We are potentially in an era of QE4EVER. Just because a yield curve inversion signaled a recession in the past, does NOT mean it will happen in the current environment due to the impact of Fed money printing debt monetization. So even though the yield curve has inverted, keep things in perspective by not taking any signal indicator too seriously.

But what could put an end to this era of QEInfinity and prevent the bubble from bursting? Trump's pro-business/lower tax policies together with exponential growth technologies will help increase GDP at home and abroad so could encourage a soft landing in terms of global debt reduction. That said, while not impossible, such a scenario still remains improbable at this time. The levels of debt in the U.S. are only second to debt levels created by World War 2. But conditions today are considerably different than in the 1940s. The attitude of central banks around the planet is to continue to print or suffer steep recessionary corrections. The magnitude of money printing en masse around the planet is unprecedented. Since political reelection is typically based on 2, 4 or 6 year terms, those in power take a short term approach at the expense of the longer term health of their country, ensuring their respective central bank continues to "print money" via QE, thus securing their being reelected since, as the saying goes, voters vote with their pocketbooks.

It is therefore far more likely we will get a hard landing, ie, a bear market. Whether the bear is traditional (S&P 500 and NASDAQ Composite down -33%) or something like we saw from 2000-2002 (>-66%) remains to be seen. Given the stance of global central banks and the position of U.S. Federal Reserve Chairperson Powell, this QE debt bubble could continue to grow for at least another year or two, helping U.S. stock markets higher. This should also help boost the prices of bonds, bitcoin, gold, real estate, and other hard assets.

That said, keep in mind that markets could continue to correct at the present time. While the QE bull has need kept alive since 2009, there have been corrections as much as roughly -20% along the way. Each time and in predictable fashion, the Federal Reserve would lower rates increasing their balance sheet.