The NASDAQ Composite bounced again off its 50-day moving average on news that the U.S. and China had created a roadmap towards reaching a trade agreement by November. While this could propel the major averages back to new highs, the wide banding, sloppy market of 2018 has presented many challenges to investors. Our Wyckoff undercut & rally and Voodoo volume dry up patterns, on balance, remain viable with minimal risk.

Someone asked why such challenging periods such as how the market has traded in 2018 cant be predicted and labelled accordingly but predicting any sort of future moves in the market along with the duration of difficult periods is futile. This sort of mindset will end up costing more in the end since one is liable to be wrong more often than right. Noted futures trader Ed Seykota has said, "The trend is your friend until the end when it bends". If he or anyone knew ahead of time when a trend would end, outside of real-time analysis of price/volume action, such an astounding technique to identify such occurrences would have been published long ago. As Seykota has often said, the future does not exist, so why try to predict it? Instead, it pays to remain in the present, watching for indications on what to do next. The price/volume action of stocks and major indices are all one needs to know. News is largely irrelevant except perhaps as a contrarian indicator. Further, should the markets react negatively to good news, that is another sign of market weakness. Conversely, should markets react positively to bad news, that could be a bullish signal.

As one example, the Dow Industrials rose nearly 400 points in Thursday's trade on higher volume as the US and China resumed trade talks. This was an indication that the so-called bad news out of Turkey involving its currency crisis seemed to be contained to Turkey, thus this enabled markets to shrug off the chaos. Turkey accounts for less than 1.4% of the world's GDP.

Meanwhile, the impact of China on the rest of the world has been exaggerated which partially explains why China has more to lose than the U.S. in any trade war. While the World Bank claims China's GDP exceeds that of the US by $2 trillion ($19 vs $17 trillion), this is based on purchasing power parity exchange rates. This is the rate that tells you how much you need in China to buy the same basket of goods. But when nominally adjusted for actual purchasing power between the two countries, the US GDP is still almost twice that of China's. But the gap between the US and China has been narrowing. Various reports including those by Goldman Sachs suggest China will become the world's largest economy by the year 2029.

This astounding growth is part of China’s explosion in private equity. Currently, almost 16,000 limited partners have disclosed investments in private equity and VC funds totaling 6.1 trillion RMB, or close to $1 trillion. The three main areas of focus are robotics, driverless vehicles, and biotech.

Over in biotech, major Chinese companies, Tencent and Baidu, made a joint investment in various cutting edge US companies with the plan to work its way from copycatting to innovating, just as it worked its way from a largely ‘copycat’ tech ecosystem to a thriving hub of innovation and cutting-edge research.

By investing big in US (particularly AI-based) biotech, China aims to shrug off its reputation as a low-grade generic pharmaceuticals manufacturer and begin pioneering novel therapies.

This is not to suggest buying this ETF or any Chinese names at this time as all Chinese stocks traded on the US markets are in sharp downtrends. That also does not mean one should ignore Chinese names altogether. Watch for potential Wyckoff undercut & rally, bottom fishing pocket pivots, and/or Voodoo volume dry ups for possible entry points. Shanghai is in a bear market but Chinese stocks offering potential entry points on Shanghai market rallies can be profitable. It also cant hurt to understand that tech in China is being fuelled by serious capital inflow so expect some substantial biotech companies to emerge in time. 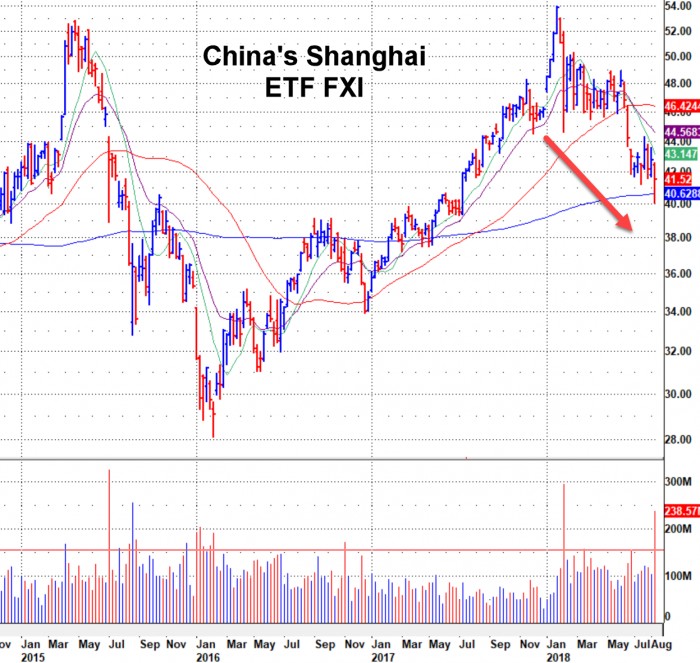 In addition to China fueling its biotech space, China plans to lead the world in AI by 2030. As Eric Schmidt of Alphabet (Google) recently said, “It’s pretty simple. By 2020, they will have caught up. By 2025, they will be better than us. By 2030, they will dominate the industries of AI.” And PricewaterhouseCoopers recently projected AI’s deployment will add $15.7 trillion to the global GDP by 2030, with China taking home $7 trillion of that total, dwarfing North America’ $3.7 trillion. In 2017, China accounted for 48 percent of the world’s total AI startup funding, compared to America’s 38 percent.

China's copycat era of mediocre-quality products forged some of the most competitive entrepreneurs in the world. Former founder-director of Google Brain, Andrew Ng said recently, “The velocity of work is much faster in China than in most of Silicon Valley. When you spot a business opportunity in China, the window of time you have to respond is very short.” China's startup, SenseTime, would be one such example.

This sounds similar to the blockchain space where an open source ethos enables anyone to build on anyone's creation. Thus idea execution along with marketing must be timed just right. It has been said the winners in various facets of blockchain will be the ones who are among the first to establish a strong network effect. But since the cryptospace changes at breakneck speeds, the challenge will be to maintain their customers/audience in the face of potentially superior platforms that may emerge.

While there is natural skepticism to China's accounting standards that have generated some whopping earnings and sales numbers when companies report, there is factual evidence of hypergrowth development in certain areas of Chinese tech. For example, Chinese AI researchers have caught up with their American contemporaries. At AAAI’s 2017 conference, an equal number of accepted papers came from U.S.- and China-based researchers. Meanwhile, Baidu, Didi, and Tencent have all set up their own AI research labs. And China’s Face++ now leads the world in face and image recognition AI, beating out top teams from Google, Microsoft and Facebook at the 2017 COCO image-recognition competition. Voice recognition software company iFlyTek has not only outcompeted teams from Alphabet’s DeepMind, Facebook and IBM Watson in natural-language processing, but has done so in its “second language” of English.

S-curve technologies which include AI, blockchain, and VR will push us up into the steeper part of the parabolic techno-development curve. The numerous technologies with exponential growth rates which go unnoticed in their early stages of development are starting to take center stage. Nascent technologies will always be far more volatile, like a newborn, and the cryptospace's "nth" bubble burst we are witnessing this year is a good example.

Ethereum co-founder Joseph Lubin stated that each blockchain bubble has led to a “tremendous surge in activity” which has seen development activity rise by “two orders of magnitude” since the jump in prices last December (2017). According to Lubin, bubbles are part of the ecosystem that has positives as well as negatives. Each of the bubbles experienced in the market has brought more “attention into our ecosystem,” he explained. "We feel the exponential increase in activity in our ecosystem. It is overwhelming what’s going on in terms of our different product projects, in terms of new scalability technologies, new teams and projects, developers that our entering our ecosystem, new large companies that have gotten comfortable with our ecosystem."

Indeed, the number of top minds migrating away from their respective positions into blockchain has been unprecedented with an exponential rise since 2013. Entrepreneurs with the prospect of “building fundamental infrastructure”, driving efficiencies, and creating more value have been key drivers.