The flattening yield curve together with the recently reported wage inflation growth of 2.9% in a concern to investors. Economists generally consider an increase of 3.0% or more to be consistent with rising inflation.Still, inflation remains subdued suggesting the Fed may slow the pace of rate hikes so as not to upset the economic apple cart. The concern is that multiple future rate hikes could topple this QE fueled bull market which is now in its 10th year, making it the longest bull market in US history.

Bubbles rarely deflate on their own without bursting when debt gets this excessive. But will the Fed be able to hike as many times as anticipated? Futures currently show at least 4 more rate hikes on the way, with near certainty when the Fed meets in September then a 58% chance when they meet in December. But the global economy remains fragile as demonstrated by the reluctance of global central banks to reduce the near-record levels of QE, thus the Fed may have no choice but to slow their pace of rate hikes, after all, they don't want to upset the economic recovery at home, as well as unwind Trump's pro-business, lower tax policies.

As for the gargantuan levels of debt, borrowing for the first 6 months of this year is greater than in any prior 6 month period. $1.4 trillion in borrowing is projected over the next 6 months. Where is the tipping point? Will it all come to a halting end?

The corporate debt bubble grew due to QE-generated ultra-low interest rates at historically low levels. $3.5 trillion worth of new money was created between 2008 and 2014 when QE in all its forms came to an end. Each QE program sent stocks and bonds higher. 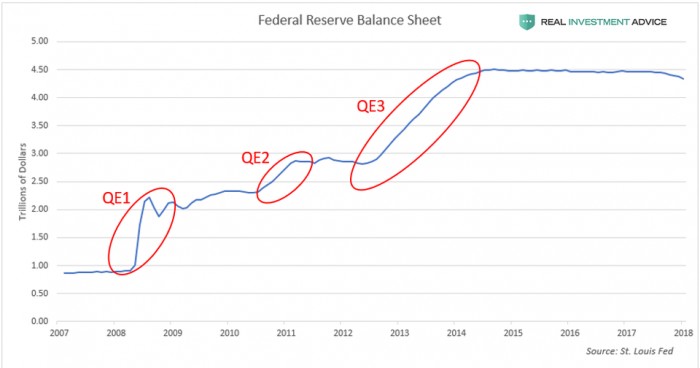 Meanwhile, corporate debt increased by more than $2.5 trillion, or 40% since its 2008 high. Corporate debt now stands at 45% of GDP, an all-time high exceeding prior levels achieved during the dot.com bubble of 2000-2002 and the housing bubble of 2008-2009. Share buybacks are expected to top $1 trillion in 2018. Buybacks exaggerate earnings as the number of available shares drops.

The S&P 500 is the second most overvalued it has been in its history, only surpassed by the dot.com bubble but surpassing the overvaluations achieved during the Great Depression of the 1930s. Tighter monetary conditions seem likely to burst this corporate debt bubble as the Federal Reserve plans to hike 4 1/2 more times based on futures estimates.

The Counterbalance to a Crash?

The counterbalance to minimizing any 'crash' or 'reset' would be exponential growth technologies in the pipeline via AI, blockchain, and virtual reality, as well as Trump's pro-business and lower tax policies. Indeed, since his policies were launched earlier this year, the effects are starting to show. Manufacturing jobs have shown strength, and 80% of jobs in the recent employment report are permanent whereas in prior jobs reports, the majority were temp jobs. Higher wages are also a good sign of a push away from poorly paid jobs.

Further, some analysts have noted the current cycle that began in 2009 is a historical anomaly, thus comparisons to the past are less relevant. In a recent report by Goldman Sachs, they suggest a period of lower stock market returns are likely in the coming years rather than an outright crash.

In the meantime, the markets are pulling back once again as trade concerns with China and Canada continue to weigh while tech stocks faltered on concerns about increased regulation. The U.S. Department of Justice said it would discuss concerns that social media platforms are "intentionally stifling the free exchange of ideas". Facebook, Twitter, and Alphabet were all hit among others.

Still, recent stocks we have mentioned in prior reports in the form of undercut & rally, volume dry-up, pocket pivots, and buyable gap ups can all be monitored, if not yet actionable based on your personal risk tolerance levels, for potential entry points once the market is able to find its footing.