Both Goldman Sachs and Ray Dalio, the founder of the world's largest hedge fund, have been saying the stock market is likely to encounter low returns at best in the years ahead due to quantitative easing and ultra-low rates which has put the world into record levels of debt, even beyond that of the 1930s. Goldman's gauge of bullish and bearish momentum in the US stock market, what they refer to as the bull-bear indicator, suggests the likelihood of a bear market occurring is at its highest point since the 1970s. But Goldman emphasizes that they are not suggesting a crash but rather a period of lower returns. CME FedFutures puts the odds of a rate hike at near certainty when the Fed meets later this month, and a 58% chance of a hike when they meet in December. Since inflation remains relatively tame, the Fed will likely err on the side of caution to avoid derailing the fragile global economic recovery, thus the rate hike later this month may very well be this year's last.

That said, part of the challenge in making such predictions is the highly unusual nature of this QE-driven bull market, such that Goldman suggests making historical comparisons is difficult at best. 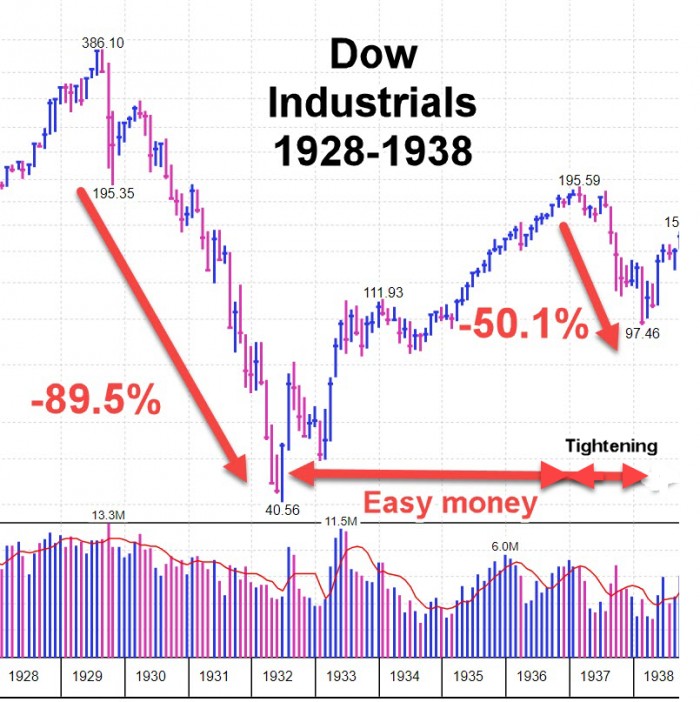 For an overall historical perspective, the discount rate was hiked substantially in 1931 as shown below due to sheer panic as world markets continued to collapse. Rates were then lowered in 1932 which sparked the beginning of the bull market after the Dow Industrials lost nearly 90% of its value. Then after a number of years of easy monetary policy with lower unemployment, low inflation, and rising GDP, the tightening of monetary policy in late 1936 triggered the -50.1% crash in the DJIA in 1937. 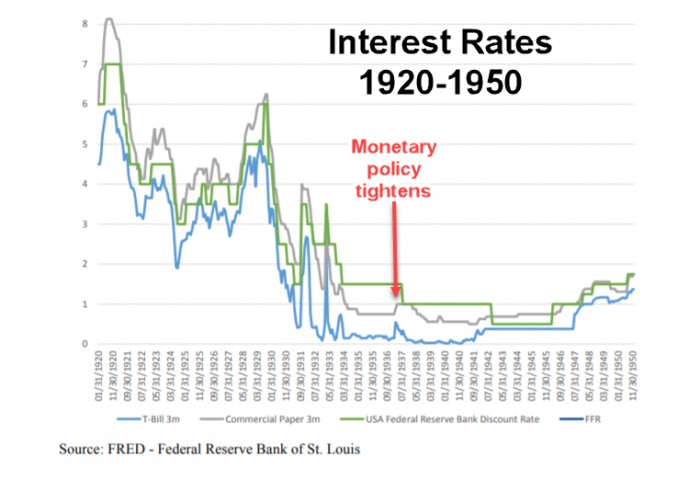 The Federal Reserve has tightened a number of times without pricking the QE debt bubble because global QE remains substantial, thus it can be argued the bull market may continue for longer yet, which will give Trump's policies more time to further prolong this ageing bull market even as global QE slowly winds down.

Inept Japanese governmental policies as well as Brexit over in the UK keep both central banks hamstrung thus near record levels of QE continue to flow from both countries. But over in the EU, beginning in October, the ECB will once again reduce the monthly buying of bonds from €30 to €15 billion. The reduced pace is set to run until the end of the year and starting in 2019, the ECB will not buy any more bonds. The Quantitative Easing program that started in 2015 is reaching its end. Stronger GDP numbers with subdued inflation is giving the ECB more room to slow QE but the ECB has said they will not look to raise rates until the end of summer 2019 as things are still fragile.

So despite current debt levels brought from a massive QE flow, if a soft landing can be achieved via Trump's pro-growth policies as well as with the help of numerous cutting edge technologies that are growing exponentially, the historical significance will not go unnoticed. But keep in mind that monetary policy has often erred at critical junctures thus has at times caused great upset to the economy and to markets. Perhaps at best, a slowing economy over the next few years could be the best possible scenario, if not something more serious of the black swan variety.

The mushy market remains thematic though there have been a few names on which we have reported that can be monitored for potential entry points in addition to reports sent on stocks already trading in low risk zones.