Market Lab Report - Premarket Pulse 9/4/18 - Why Are There So Few Investment Millionaires?

The number of investors who are worth more than a few million dollars in stocks and in cryptocurrencies is scant, even if they bought bitcoin or other coins such as ripple or ethereum early. Indeed $1 in bitcoin in 2013 would be worth 500 to 1000-times what was paid. So a $10,000 investment would today be worth $5 to $10 million. Yet so few such investors exist.

The primary reasons are the same as to why most investors cant make and/or keep big money when it comes to trading stocks. The emotions of hoping when one should be fearing, and fearing when one should be hoping, according to Jesse Livermore, are two key reasons why investors lose money, or fail to hang onto large gains. In other words, if an investor bought a stock at $100, and it drops to $90, instead of fearing they will lose more and selling the position, they hope it will go back to $100. Meanwhile, the stock may drop much further, making the sell that much harder psychologically to sell. And the further a stock falls, the harder it is to sell. As has been said, the first sell is the easiest sell. This is why some investors have stocks in their portfolios that show staggering losses of 50% or more.

Likewise, if an investor bought a stock at $100 and it rises to $130 in a strong bull market, unlike most stocks we have seen these past few years, they often fear it will drop back to $100 so may sell it prematurely, capturing premature profits instead of holding on for much larger gains. I created the 7 week rule to help longer-term oriented investors to sit with a position for potentially big gains, utilizing the 50-day moving average as their guide but only if it has violated its 10-day line within 7 weeks. This can aid in helping investors avoid the issue of fearing and selling prematurely, when instead, they should be hoping their stock will be a true leader, rising 100% or more, thus helping them hold it for potentially much larger gains.

Thus we come back to why there are so few millionaires in stocks and in cryptocurrencies such as bitcoin. If one bought bitcoin at say $10 in early 2013, everyone I knew had cashed out by the time it reached $100 later in 2013. Then when it soared to $1100 by the end of 2013, most couldn't buy back it since they had sold at a much lower price. Psychologically, they were locked out of the trade. But then, when bitcoin topped in Dec 2013, then proceeded to drop back down to $500-750, losing more than 1/3 of its value, many investors bought back, thinking they were getting a good deal. But bitcoin continued to fall and didn't reach its low until January 2015 when there was panic selling bringing its price all the way down to $150, or an 87% drop from its peak achieved in Dec 2013. Naturally, many investors lost money on the trade. Having been burned, such investors often refused to buy back into bitcoin, or simply did not see the several buy signals that occurred starting in January 2015 when bitcoin issued a major buy signal when various metrics I use such as the NVT (Network Value to Transactions) data spiked to new lows. 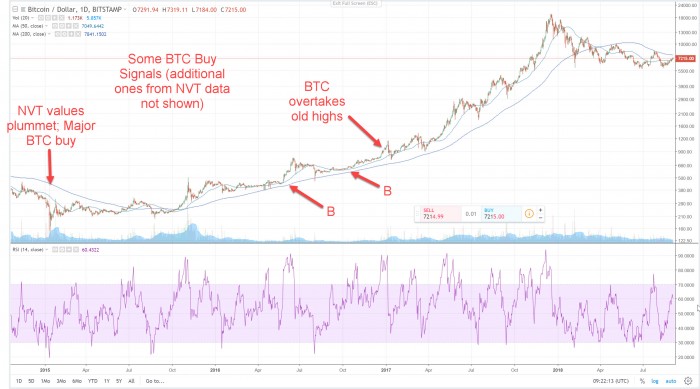 So while the cryptospace market remains in the clutches of the bear, there will likely be scant buy signals as most all coins heavily correlate with the direction of bitcoin and ethereum. But once bitcoin issues a major buy signal as it finds its floor as it did in January 2015, it should be off to the races once again. Rinse and repeat (since 2012).

It is often said one's trading psychology is at least half the battle. Indeed, one must realize and properly handle these potential pitfalls in trading if one wishes to hit home runs in a strong bull market. Meanwhile, the current market environment has been one of singles, rarely any home runs. Thus naturally understanding the market environment in which one trades is also key. Wyckoff undercut & rally and volume dry up patterns present low risk opportunities. Keeping risk to a minimum in such challenging markets where gains are harder to come by is essential, otherwise one could end up getting nickeled and dimed over a series of trades, which could lead one's account getting quartered.