The NASDAQ Composite Index cleared the 7,500 level for the first time ever on Friday, while the S&P 500 Index is 4% away from the 3,000 level.  Meanwhile, the Market Direction Model (MDM) is up +25.8% so far in 2018 using the 3x leveraged Direxion Daily Technology Bull 3X Shares (TECL) and +8.7% using the non-leveraged NASDAQ Composite as the benchmark, and we have not even completed January. It remains on a buy signal.

Futures are lower at the time of this writing as the market's attention turns to the outcome of the Federal Reserve's two-day meeting on Wednesday. While no interest rate hike is expected at this meeting, investors will focus on outgoing Fed Chair Janet Yellen's last statement for clues regarding the future path of rate hikes. With the U.S. economy showing signs of strength given GDP and jobs data, a more hawkish stance would not come as a surprise. The Fed must find a way to fuel the interest rate tank by way of rate hikes while also realizing that too aggressive a move could upset the global recovery which remains questionable.

The ECB will continue to make asset purchases at €30 billion per month until at least the end of September 2018. Its concern is persistently low inflation. This reflects sluggish demand despite alleged economic strength and low employment. Inflation fell to 1.4% in December, below the central bank’s target of near but just below 2% and gives policy makers no reason to hike rates.

The issue is persistently low inflation despite the alleged signs of strength in the eurozone economy. The concern is that with interest rates at all-time lows, with the deposit rate at negative 0.4%, there will be no room to lower should the economy falter. Further, negative interest rate policies have been shown to be somewhat crippling to financial structures where they have been attempted such as in Japan and in Germany.

From the ECB's December statement:

• “We continue to expect [key ECB interest rates] to remain at their present levels for an extended period of time, and well past the horizon of our net asset purchases.”

• “We intend to continue to make net asset purchases under the asset purchase program (APP), at a monthly pace of €30 billion, until the end of September 2018, or beyond, if necessary, and in any case until the Governing Council sees a sustained adjustment in the path of inflation consistent with its inflation aim.”

ETFs such as TLT which track the 20+ year bonds are probably going to wend their way lower after being in a very loose uptrend since QE began in late 2008. 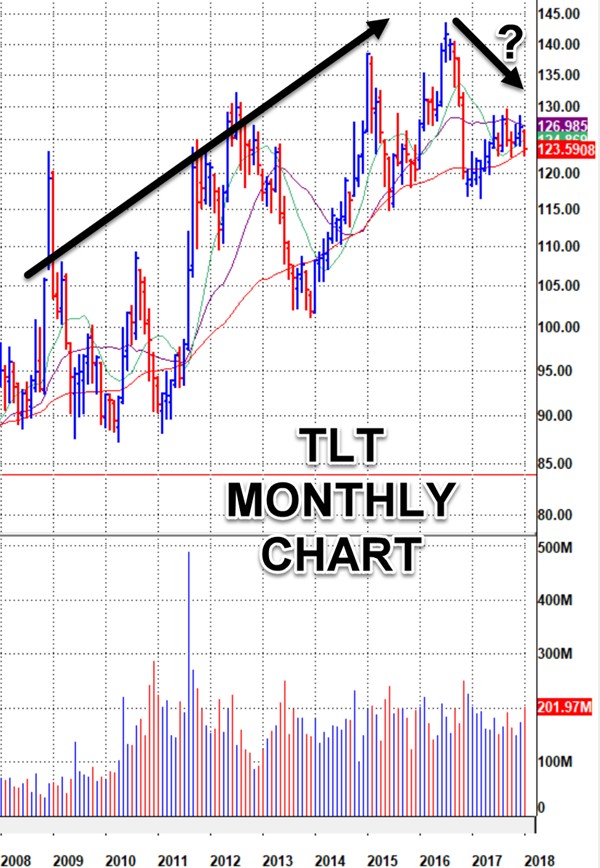 Bond king Bill Gross has warned of the inevitable bear market in bonds. Of course, if central banks do not slow QE by meaningful amounts and rates remain at or near all-time lows, this QE sovereign debt bubble could continue longer than anyone expects. Deutsche Bank said in a recent report that unwinding trillions in debt will be the real test for this ageing bull market.

Meanwhile, currencies as a whole remain under siege should the debt bubble remain problematic. This would occur if global economic growth slowed or reversed. There is still nearly no fuel in the interest rate gas tank. Lack of demand by way of persistently low inflation despite record levels of liquidity is a bad sign. Should the global economy take a turn for the worse, central banks have little ammo in the way of reducing interest rates to spur an economy. As things stand, negative interest rates have been shown to be crippling to financial structures. Japan and Germany are two such recent examples. The ECB deposit rate remains at -0.4%.

Highlights of the Week:
Netflix (NFLX) was the stock of the week as it posted a 24.55% gain for the week. We first reported on the stock on December 27, 2017, when it was trading at 192.71. At that time it posted a pocket pivot at the 10-dma, just below the 50-dma. By the time earnings came out on Monday after the close, the stock was trading above 220, enabling anyone who bought the pocket pivot to sit through earnings given the sizable profit cushion in the stock at the time. (Please note we use magenta for the 10-dma, green for the 20-dema, and blue for the 50-dma on the charts shown below.)

Of course,  not all is wine and roses in this market. Coherent (COHR) was placed on our Focus List near the 50-dma in early January. It posted a pocket pivot at the 50-dma on January 3rd, and a second on January 5th. From there it proceeded to set up over the next few days before breaking out on January 17th. However, that breakout failed rather miserably, and the stock quickly broke support at the 20-dema and the 50-dma four days later. However, not that buying near the 50-dma on the basis of the pocket pivot on January 3rd would have kept one from experiencing a serious lost vs. chasing the January 17th breakout. Not everything is going to work in this market, although it may seem like it at times given the strong market uptrend, and early entries within the base can help mitigate risk when things do not go according to plan.

Alibaba (BABA) had a good week as it broke out following the formation of a tight "L" formation along the 20-dema. It first posted a pocket pivot off the 10-dma and coming up through the 50-dma on January 2nd, and then proceeded to move back up towards the highs of its base. It had one heavy-selling day that took it right back to the original pocket pivot entry point and then held tight along the confluence of the 20-dema and 50-dma as volume declined. However, in this market, one day of a sharp sell-off that holds key support may not necessarily be an issue. Once the stock stabilized, we pointed out in our Focus List Notes at the time that the stock looked buyable along the 20-dema, using the 50-dma as a selling guide. Buying there would have given one a jump on the ensuing breakout and strong move higher ahead of earnings which are expected this Thursday before the open.