The general market trend remains to the upside, and our Market Direction Model has remained on a buy signal since September. However, recent action has become more news-oriented and somewhat choppy as each House of Congress wrangles with its own version of so-called tax-reform legislation. The House of Representatives on Thursday passed its own version of the legislation, while the Senate intends to vote on its own version after the long Thanksgiving Holiday. One characteristic of politicians and government officials that remains timeless and dependable is their proclivity to defer pressing matters in favor of taking yet another vacation!

As usual, we believe the inherent volatility of the market makes our OWL(TM) methods quite effective, as we've seen recently with Focus List stocks like Arista Networks (ANET) and Weibo (WB). Invoking the spirit of the "Ugly Duckling," whereby OWL long set-ups appear in stocks when they begin to look the ugliest, has proven to be much more efficient than the rote buying of standard-issue O'Neil-style base breakouts.

This past week, members received a Pocket Pivot Report on Gardner Denver (GDI), as it completed a 22-million-share secondary offering and retested its early November buyable gap-up (BGU) move. This offered buyers a lower-risk entry opportunity that led to a nice move back above the 30 price level.

On the short side, members received a Short-Sale Set-Up report on Tesla Motors (TSLA) on Thursday, advising them to look for any news-related rally up to or through the 200-dma as a possible short-selling entry opportunity. The company unveiled yet another product in the form of an electric semi-truck. One wonders, however, how TSLA expects to produce an electric semi-truck when it can't even manufacture its new Model 3 in sufficient amounts.

TSLA also has the rare distinction of being a company that thus far has achieved "dis-economies of scale," since the more vehicles it manufactures, the more the cost per vehicle. In the real world, when companies increase the number of products they manufacture, they tend to achieve "economies of scale" whereby each addition unit produced costs less, resulting in lower marginal costs. TSLA is one of those rare birds that realizes rising marginal costs, and in the process its proficiency at losing money forces it to become a permanent parasite of capital ever in search of a new host from which to suck the green blood.

We believe the likelihood of another, much-need capital raise is rising, probably in the form of an equity secondary offering. Shorting TSLA into Friday's semi-truck hype/news-created gap-up at the open in the 326-327 price area was successful as the stock broke below the 200-dma to close around 315. Any announcement of a stock secondary offering could easily send the stock lower, and members should remain alert to new reports regarding additional short-sale entries as we see them in real-time.

Retailers sprang to life in the latter part of the week on hopes for a corporate tax rate cut to 20% from the current 35%. This is seen as benefitting retailers but we were already on Canada Goose Holdings (GOOS) on Tuesday when we issued a Buyable Gap-Up report to members as the stock was in the process of pulling back into its 10-dma following the buyable gap-up after earnings two Fridays ago. The stock is now extended, but illustrates the use of the 10-dma as a reference point for a lower-risk entry on a pullback following an initial BGU and subsequent move higher. 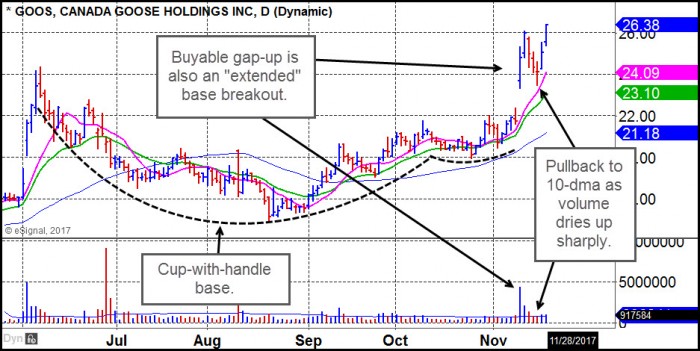 GOOS also illustrates the efficacy and superiority of using OWL(TM) buying methods over standard O'Neil-style, CAN SLIM(TM) breakout buying. Carefully note that GOOS' gap-up move was also a breakout from a cup-with-handle base, but using standard CAN SLIM methods this would have been much more than 5% extended above the CAN SLIM "buy point," and hence not buyable on that basis. So much for outdated, highly-limiting methods. Using the buyable gap-up method, however, GOOS was in fact quite buyable on the pullback to the 10-dma, even though it was still "extended" from the so-called cup-with-handle "buy point," since it had never moved below the 23.32 intraday low of the November 9th buyable gap-up day's trading range.

This week will be a short one, thanks to the Thursday Thanksgiving Holiday (something to be thankful for, no doubt!) but one should not assume that the action will be muted and volatility-free. Our own experience tells us that anything can happen at any time, and many "quiet" holiday periods have had their share of sell-offs and big rallies. Devising a trading strategy around what "historically" occurs around holidays, any holiday, is generally of little value. Just watch the stocks, and the individual stock set-ups, including unorthodox OWL-style set-ups as they occur in real-time.

Futures are up slightly this morning.