The Dow swung around in a 1,134 point range yesterday, opening down and reaching of low of -567.01 points, then swinging several hundred points back and forth all day long before moving higher by the close to end the day up 2.33%, or, coincidentally, 567.02 points. It was a wild ride, but the general pattern was one of big-volume support in a broad number of stocks, mostly at their 50-dmas. The rally was also logical from the standpoint of an extreme oversold condition that coincided with a undercut of the prior December lows and the top of a prior consolidation as was the case with the NASDAQ Composite Index. This is a typical undercut & rally move, and the NASDAQ was able to regain its 50-dma in the process while the Dow and the S&P 500 both fell short of their 50-dmas. Whether this marks a final low for the market remains to be seen, as most stocks found support at extreme lows in their patterns. Volume was very heavy in most cases as buyers couldn't resist the sudden appearance of prices not seen since last year. 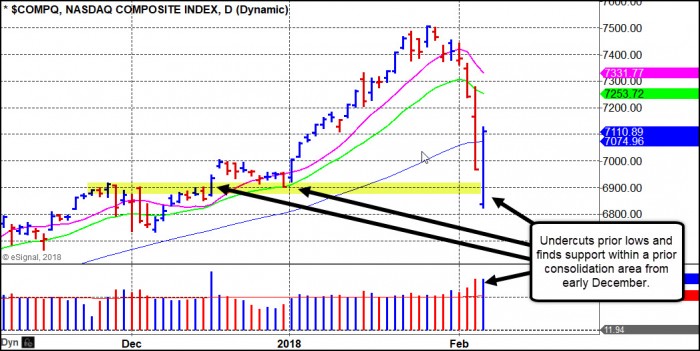 Gil tweeted yesterday morning (you can follow him at @gilmoreport on Twitter) that "Now all the geniuses who didn't tell you to sell before the sell-off are telling us how bad it is...indexes are in U&R land, so I'd look for a reflex rally," referring to the fact that the market had come down far enough and hard enough so that it was in an extreme oversold position as it was also undercutting prior lows. This set up the undercut & rally, U&R for short, move we saw today, and it is when we can look for stocks to find support, even if at areas that might be considered "compromised," deep in their patterns. At that point we saw all of the Focus List names find support at critical points in their patterns and rally hard. Some, such as FB, NVDA, and TTWO, for example, found support deep in their patterns.

Futures are slightly lower this morning. though relative to the recent plunge and yesterday's bounce, some retracement can be expected as heightened levels of volatility remain. But if history is any guide, major spikes in the VIX usually settle lower over the ensuing days as can be seen in 2011, 2014, and 2015:

However, the VIX in 2008 reached nearly 100 after first spiking to 50 which caused an initial market bounce:

So keep in mind markets remain on tenuous footing with respect to the QE bubble as trillions need to be unwound and markets are forward looking.

Focus List Notes:
AMZN found support at its 20-dema and rebounded strongly on heavy volume.
FB opened below its 50-dma and then rebounded to close back above this key moving average on heavy volume. Obviously, FB was "compromised" once it busted the 50-dma, but once it was able to rally back above the line, it triggered what Gil refers to as a "moving-average undercut & rally" move. It then proceeded higher from there. A constructive retest of the 50-dma might help reveal how sustainable the rebound is.
NFLX also rebounded smartly off its 20-dema on heavy volume, which coincided with a successful test of its prior 248.02 BGU low of January 23rd.
NVDA failed on a prior breakout on Monday as it dropped below the breakout point, but found support at  its 50-dma yesterday and regained the breakout point. This might have been considered to be "compromised" based on the drop below the prior base breakout point, but the 50-dma provided deep, alternative support. Earnings are expected on Thursday after the close.
SQ was removed from the list yesterday, but we note that it posted a supporting pocket pivot at the 50-dma on strong volume. For that reason we are putting it back on the list on a provisional basis as long as it can hold the 50-dma.
TTWO undercut the lows of its January consolidation after failing on a recent breakout, but found volume support at the 50-dma. Another example of a stock that is "compromised" but finds support at a logical point deeper within its pattern. It will report earnings today after the close.