Major averages finished roughly flat to lower on mixed volume with the NASDAQ Composite and S&P 500 pulling into support. Futures are up strongly as Hurricane Irma hit Florida with less force than expected and North Korea failed to conduct another nuclear missile test over the weekend.

The major averages have been trading in an artificially compressed range for much of the year, plunging briefly on negative news which is then followed by an anemic recovery. As the struggle between weak economies and QE rages on, central banks continue to leave rates at historically low levels. They're like a herd of deer caught in the headlights of a massive mack truck as they struggle to figure out what to do next. Central banks are leaving open the possibility of not just keeping rates at all-time lows, but pushing them lower should their respective economies weaken further. Negative rates in Japan and in Germany have been crippling to financial structures, so printing more money does not seem to be a reasonable solution. The can has been kicked down this road since 2009. Are we coming to the end of the road?

Here in the US, the Fed has pushed the discussion of tapering until the next Fed meeting. The odds of a rate hike by the end of the year continues to fall. The GDP numbers are suspect since they factor in an artificially depressed CPI. Even with this distorted CPI, GDP numbers have been relatively weak. On this basis, some have suggested we are already in a recession. Further, the unemployment figures are also suspect since they don’t factor in those who have given up looking for work. Singularly, the monthly change in nonfarm payroll employment has been trending lower since 2014. 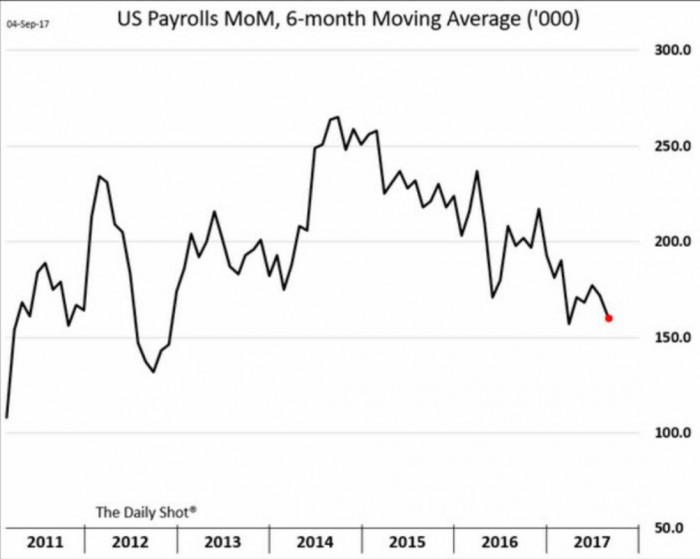 Meanwhile, gold continues to rise. Gold is the fear trade. Tensions between the US and North Korea remain. Plus money printing devalues currencies which further boosts the price of gold. As an whole, the world has not seen a debt bubble of such magnitude. Perhaps the falling US dollar which has not had such a sharp drop since 2010 is an ill omen. 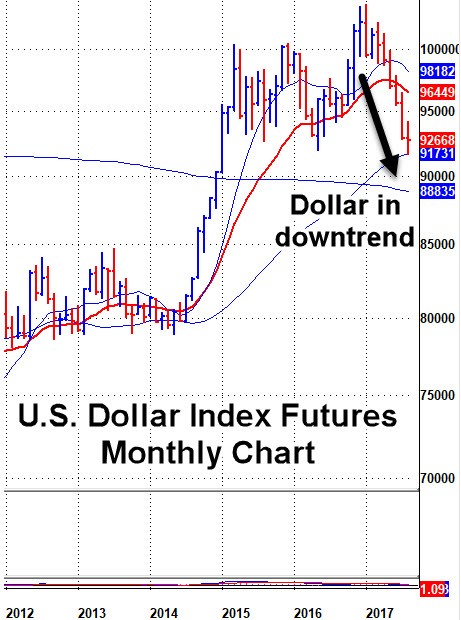 Financial stocks are getting pummeled as the yield curve nears its flattest level since 2007. When the yield curve is flat, banks make less on the spread between what they borrow in the short term and what they lend over the long term. Last week, the S&P Financial ETF XLF closed below its 200-day moving average for the first time since June 2016.

Fast forward to today. In 2016, after the presidential elections last November, the yield curve steepened due to the belief that President Trump's policies would help the economy. But given the yield curve flattening for much of this year,  the bond market is signaling a lack of confidence in the economy. Combine this with the issues mentioned throughout this piece and we may get that meaningful correction sooner than expected. Remain fluid in your approach, keep stops tight, and be on the lookout for opportunities on both the long and short sides of the market including a spiking VIX via the UVXY ETF as we have outlined to members in prior reports.