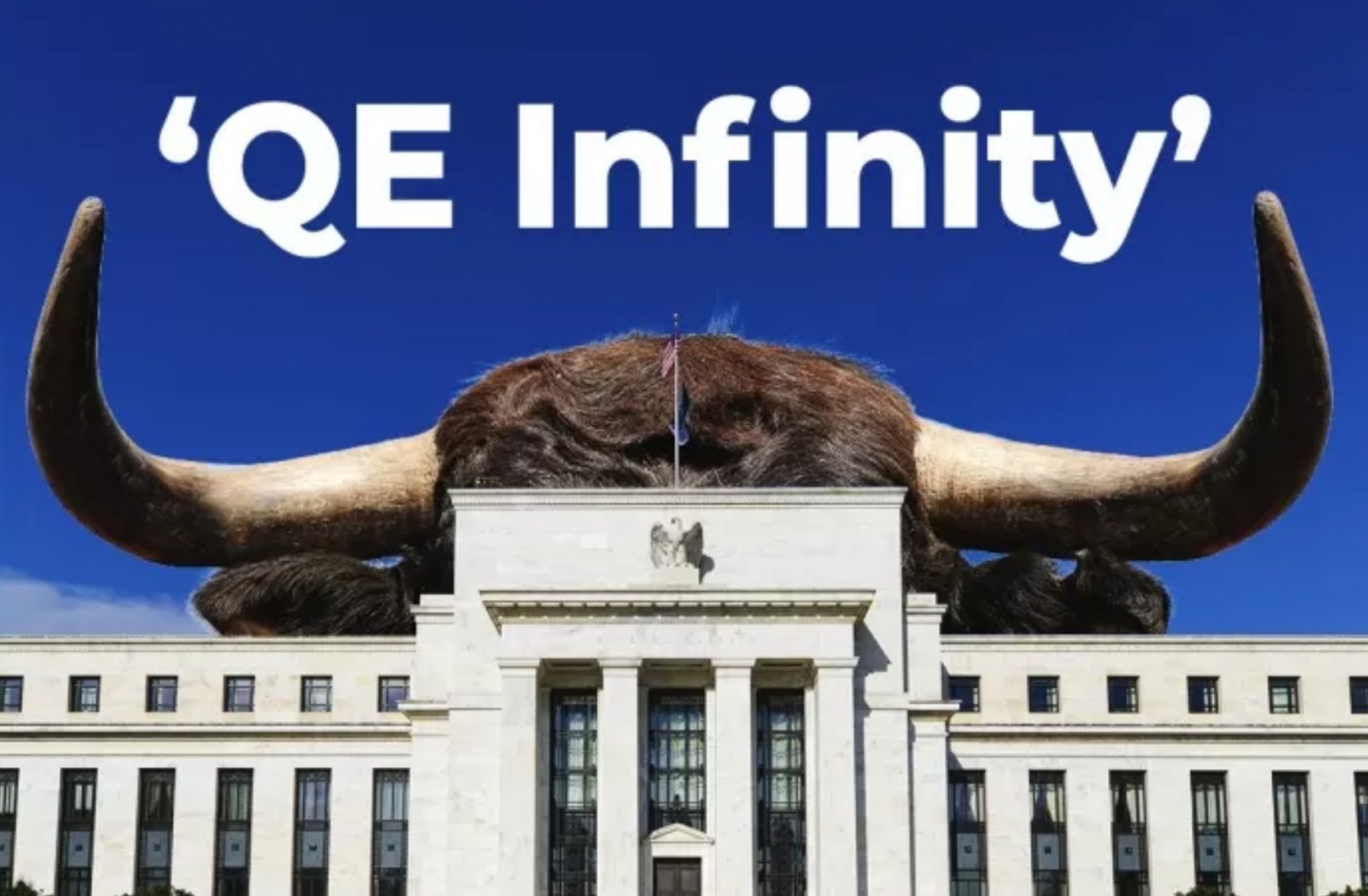 The Federal Reserve on Monday announced it would purchase an unlimited amount of Treasurys and mortgage-backed securities in order to support the financial market. The Fed had previously set a $700 billion limit for asset purchases. In addition, the Fed announced several new lending programs worth $300 billion to support companies hurt by the shutdown of the U.S economy. Then on Wednesday, a $2 trillion stimulus package was passed into law. In a statement, the Fed said aggressive efforts must be taken to limit the losses of jobs and income.

We have had numerous threats over the last century. There are never unlimited resources for any given threat, whether in war or peacetime, whether its some form of terrorism or a natural disaster. But due to the leftist-ruled mainstream media which can influence governmental policy, this logic has gone out the window with the arrival of COVID-19. Globally, the World Health Organization (WHO) estimates that the typical flu kills 290,000 to 650,000 people per year. COVID-19 has been suggested by mainstream media to be at least 20-times more lethal than the flu even though many who have died that are counted in this tally had other existing serious health conditions, often reflective of their advanced age. That said, COVID appears to be more infectious and deadly than influenza, but a recent chart shows it appears to be far less infectious and deadly than some other diseases have been over the last 50 years. Still, new data is incoming each day so all numbers are subject to change, for better or worse. 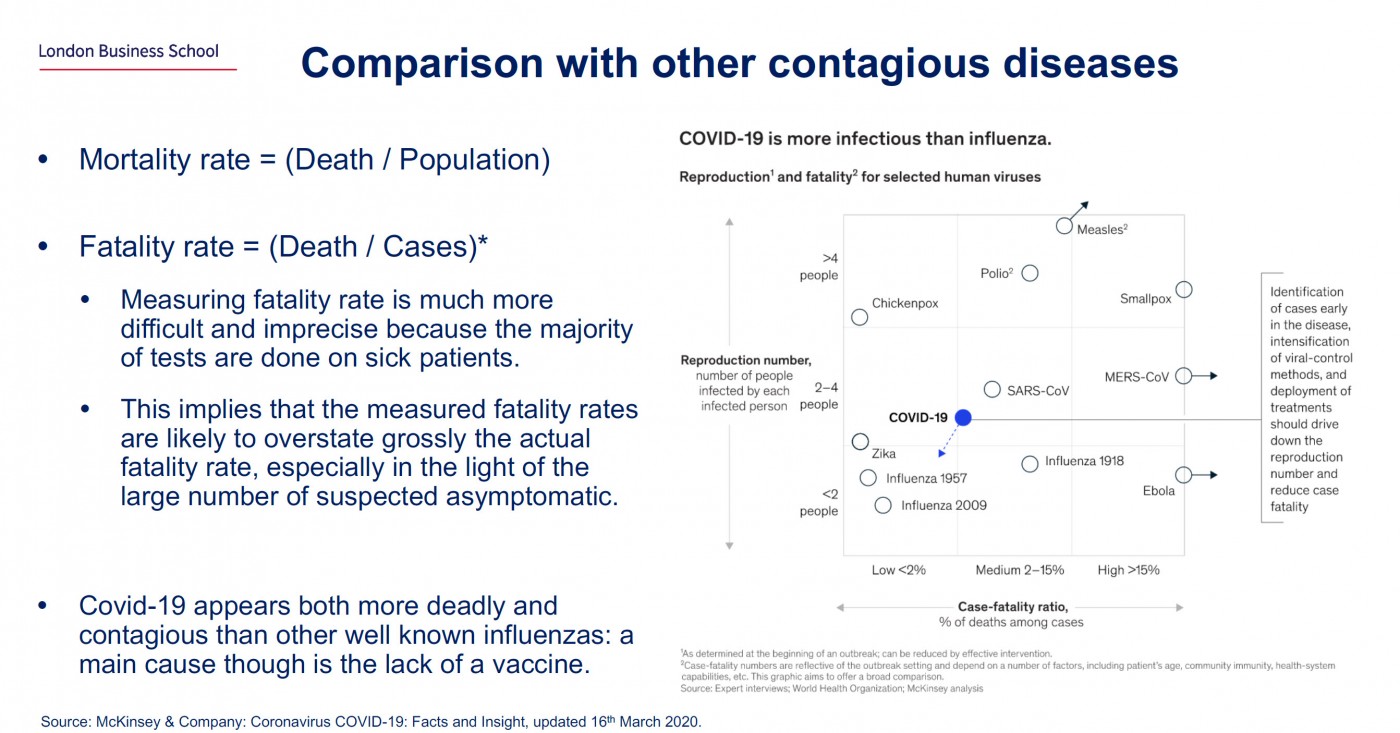 Nevertheless, governments have simultaneously agreed to implode whole sections of their economy with the majority of populations in lockdown. This has never happened in the history of humanity. The second and third order effects of massive stress, lost jobs, social unrest, and bankruptcies tend to have long lasting effects and potentially tower above the final tally of deaths or life-compromising health consequences resulting from the coronavirus. Numerous studies have shown that the negative effects of typical recessions are felt by many people, years after the recession ends.
But governments have come to the people and said we have unlimited resources so don't worry. This has been said in the US and UK and the EU. Hooray for QEInfinity! Who needs an economy if no one has to work? Big brother is our friend ????  Yet in every crisis situation, governments have used such crises to boost their power. As one example, rights crippling laws were passed after 9/11 in the name of protecting the people from acts of terrorism. A similar situation can be seen post-2008. And it is far easier to pass a law than to repeal it.

The wealth gap also known as populism which was at levels not seen since the 1930s will widen. Various reports had shown that the majority of those in the US and UK have less than the equivalent of $1000 in savings, as many as 75%. As a consequence of the economic lockdown, people will be in even greater debt despite the $1000 in helicopter money such that some businesses and properties will have to be sold at fire sale prices. Some amazing deals will be coming to those who have capital.

On an authoritarian level, anyone who sits or stands less than 1m (3.3ft)  away from another person in a public place can be fined up to US$7,000, jailed for up to 6 months or both, as per the new Infectious Diseases Act that was just codified into law in Singapore. Someone said George Orwell got the title wrong. His book should have been called 2020. Could this be a coronavirus coup?

Meanwhile, on Thursday, the Wall Street Journal announced the end of the bear market and the start of the new bull market on the basis that the Dow Industrials had rallied over 20% from lows. Not sure where they came up with that one. Where's the statistical significance? Bear markets can have very sharp rallies relative to the drop, so given that this is the fastest fall in market history, a rally of more than 20% seems natural. This sort of reporting is humorous at best and financially damaging at worst. The Journal wants Trump to be reelected so it paints an unusually optimistic picture on the stock market whenever it can. Wall Street itself as well as Trump always sees the glass as more than half full even when it might be near empty. The sharp bounce is a reaction to unlimited quantitative easing which so far is more than offsetting any negative reports on the economy. Yes, this level of QE can help major averages find a bottom sooner than later. It may even mitigate the severity of a recession if handled properly. But a number of unknowns are still a factor.

=How long does the virus stay around for? It is becoming less likely the virus is easily transmitted through the air unless one is in a crowded room for a prolonged period though situations such as the cruise ship and Marti Gras seemed to have infection rates above 50%. This particular form of virus is new so much of the earlier information that was reported turned out to be inaccurate.

=Vaccines are on the way but time to mass adoption could be at least several months to insure they do no harm.

=Does COVID-19 survive warm weather so there's no "flu" season when it gets cold? Harvard is researching this as they say this virus is new so cannot make assumptions.

=Will some variant return when flu season picks up again towards the end of this year?

Panic waves could be caused by economic reports even worse than are currently priced into the markets or a resurgence of corona cases due to the virus being more infectious than thought or the warm weather not eliminating it. Demand shocks as a result of lockdowns, panics, and uncertainties which could create a depressionary loop could occur (I will detail this in a future report). Some analysts have also suggested there could be a resurgence of cases in China since they are relaxing restrictions due to having no new cases.

I found it interesting how the Fed's Bullard says the coronavirus shutdown of economic activity is not a recession but an investment in survival. In essence, he is saying that this is essentially a massive multi-trillion dollar investment to keep things from getting worse. Normally, investments are supposed to help grow an economy. I guess this one is to make sure we at least stay in place.  Such an onslaught of capital will accelerate the debasement of fiat thus gold, stocks, and bitcoin should benefit.

Or if you prefer more predictable, less erratic trading environments, sometimes it's just better to play small or not at all depending on the type of trader you are.

A number of funds have a 60/40 stock/bond allocation rule. Since their stocks got hammered, the 60% has shrunk so these funds will have to buy stock to keep up with their 60/40 allocation, so we could see yet another up day in the major averages before the end of the quarter which would further improve the odds for a short-sale position succeeding, though in this time of crisis, some analysts have said this rule may be lifted.