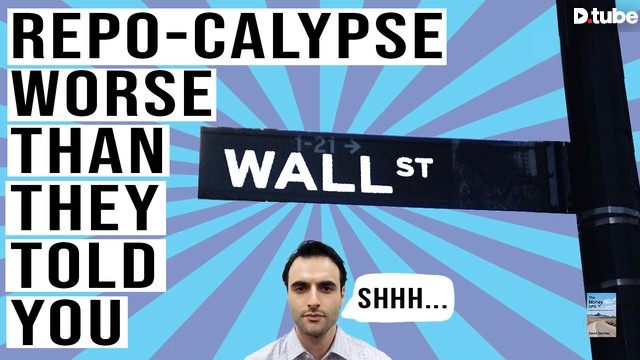 ...QE enabled the Fed to force excess reserves onto the balance sheets of banks far beyond levels they would have acquired independently. Banks used their higher supply of reserves to bid up the prices of various securities while also issuing additional and often riskier loans. As long-term rates fell, many of the securities that the commercial banks held had no yield advantage over reserves, pushing banks to take on more credit risk. QE also created overdemand for investment-grade assets which led to a relentless hunt for yield while artificially inflating prices across the entire spectrum of the asset universe.

Realizing QE must come to an end to avoid a complete warping of the financial system, quantitative tightening, or QT, was attempted globally for the first time from August to November of 2018. This created an oversupply of investment-grade bonds which lead to a flight to quality while asset prices deflated. The Fed was also attempting to remove the excess liquidity from the financial markets created by QE.

By December 2018 with markets plunging marking the first "Christmas Crash" on record with major indices getting clocked roughly -20%, it became clear that the financial markets were unable to tolerate a balance sheet run-off by central banks. This forced the Fed's Powell to issue an emergency statement that the Fed would reverse its tightening monetary policy posture and give the markets what they want- more QE. Dec 24, 2018 was the market low, and since then, it's been off to the races once more with major averages hitting new highs, now in the eleventh year of the bull market.

The problem is that global central banks continued to shrink their balance sheets through 2019 until the repo-markets broke in September. A repurchase agreement (repo) is a form of short-term borrowing for dealers in government securities. All central banks have returned once more to bloating their balance sheets with the Fed most recently saying its T-bill purchase program starting in September is "not QE".

The REPOcalypse Dead Ahead...?
On Sept. 16, rates in the repo markets spiked by 248 basis points to more than double of the overnight rate set by the Fed. The $4 trillion repo-market is used by institutional investors to satisfy their short-term demand for liquidity. On Sept. 17, the Fed was forced to buy repos to keep the market secure, following a spike in interest rates the day before due to a cash crunch. The Fed has since been buying 3 month T-bills. It claims that since these bills don't have duration, it's not QE4. But once they start buying longer term bonds, by this definition, QE4 will have started. In the post-repo aftermath, U.S. banks dont have sufficient excess reserves to lend. Monetizing T-bills do not allow commercial banks to exchange them for reserves (cash). So when the Fed buys repos and T-bills, the issue of supplying banks with sufficient liquidity still remains an issue. Further, banks get hit with surcharges as their G-SIB score rise. At present, all banks except Morgan Stanley have elevated G-SIB scores thus have an incentive to reduce their scores by year end. But G-SIB scores rise with the rise in the price of stocks. The situation is inflamed with major indices at or near all-time highs, unlike last year when markets lost about -20% by mid-December.

The Bank for International Settlements, which acts as a consortium for global central banks, issued a report stating that the issues from September could arise again. In addition, Zoltan Pozsar who used to be on the New York Fed trading desk and now Credit Suisse analyst has perhaps one of the deepest understandings of how the repo market works. He warned in an extensive analysis the other week that the central bank may have to launch QE4 or face serious market consequences before the end of the year. He writes that banks have too much collateral in the form of Treasurys and not enough cash reserves, thus big banks are unable to lend which could cause yields to spike again. Fed chair Powell has said the Fed is prepared to take additional measures as needed to quell any repo issues that resurface.

Nevertheless, should the Fed fail to act on a timely basis, a shortage of liquidity could take down Treasurys and eventually stocks as long-short equity strategies depend on instant liquidity to manage their leveraged positions. To avert this, it is highly likely the Fed will be forced to launch QE4 to avert any violent unwinding of any massive speculative financial positions created by central bank meddling. That said, as we wrote in prior reports, QE4 already started as it's just a matter of semantics. 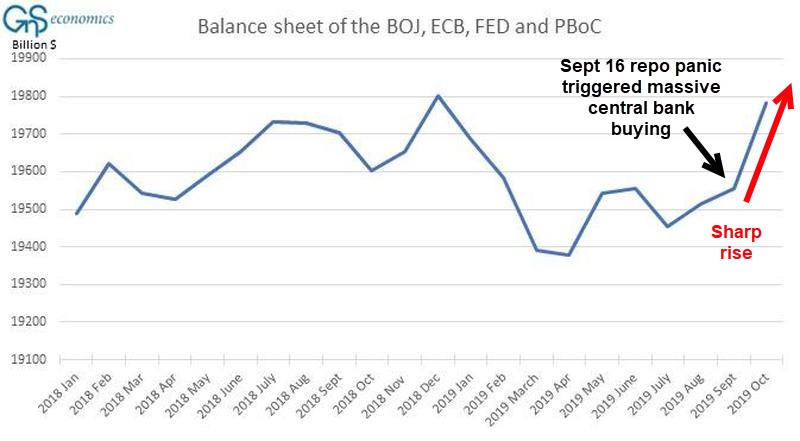 Alt-Currencies in the Era of QE

As we have been advising members for much of 2019, precious metals including gold and silver, the gold miners and junior miners have been in general uptrends as QE rages on. If we look at the long term weekly chart of gold ETF GLD, we can see it has been in a general uptrend since it found a major low in August 2018. Silver then followed as shown by its ETF SLV. Being the younger brother to gold, silver has been underperforming relative to gold as the gold:silver ratio is still near record highs. Its current ratio stands at 86 oz of silver = 1 oz of gold.

Silver tends to have deeper corrections thus higher risk but also higher reward as its gains are sharper once a material uptrend ensues. 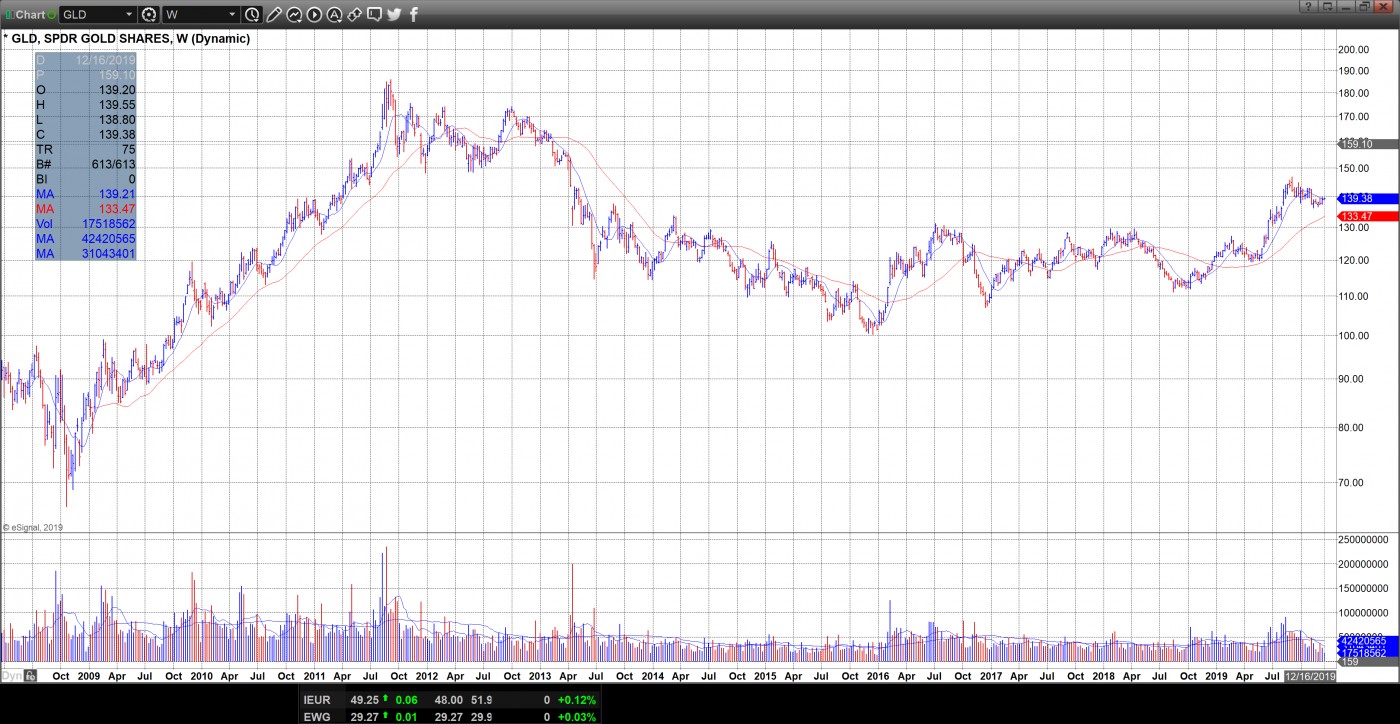 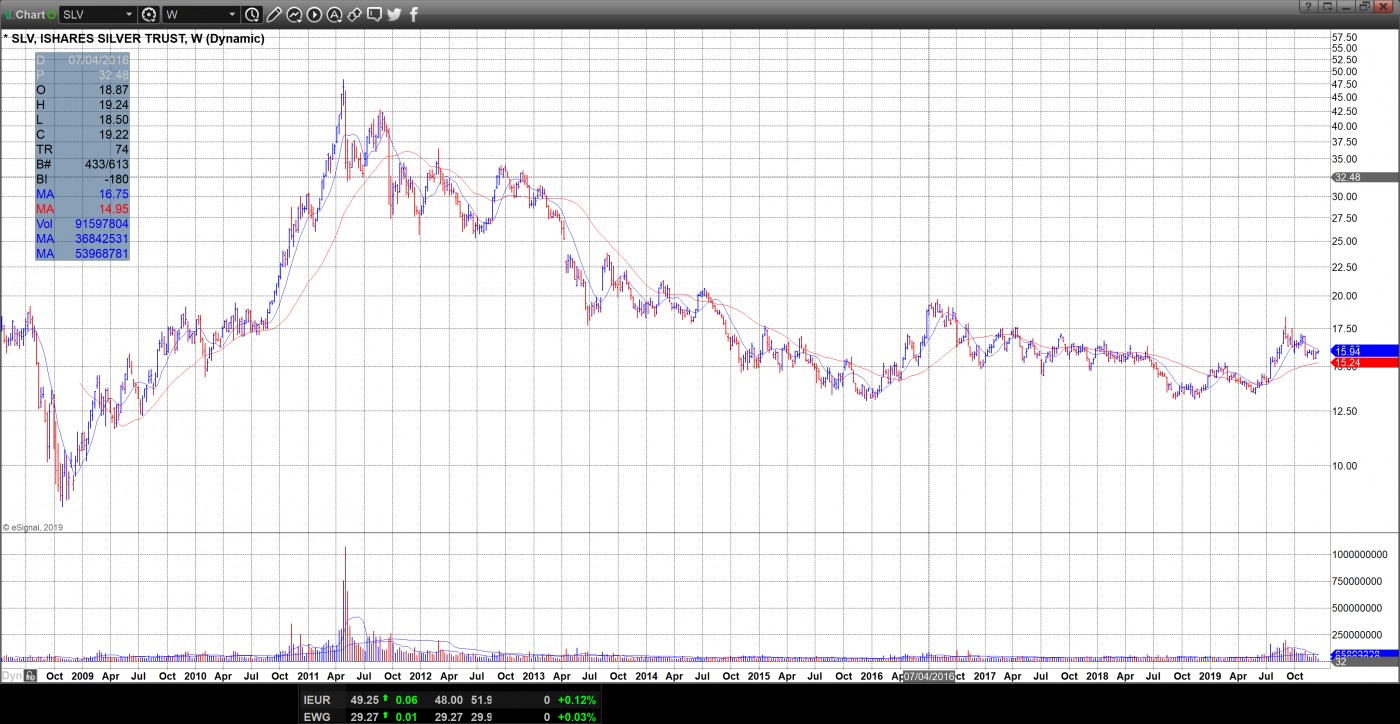 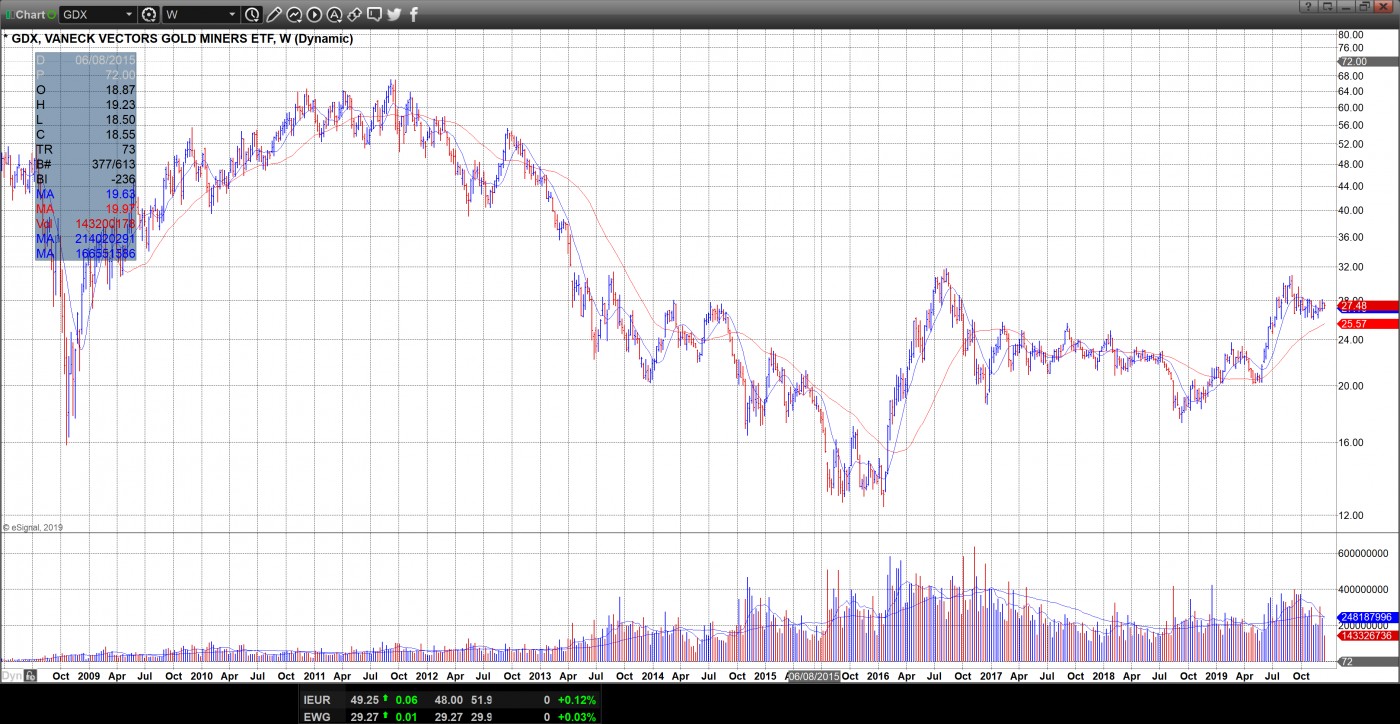 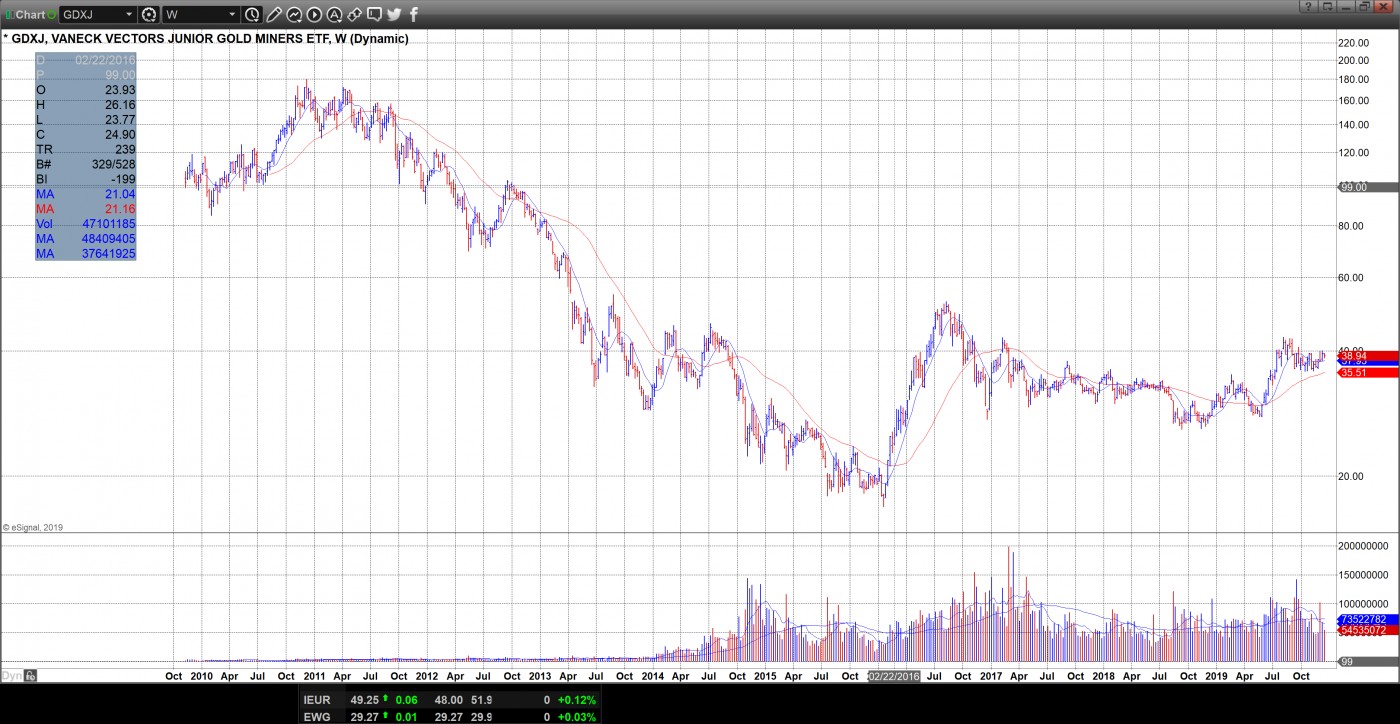 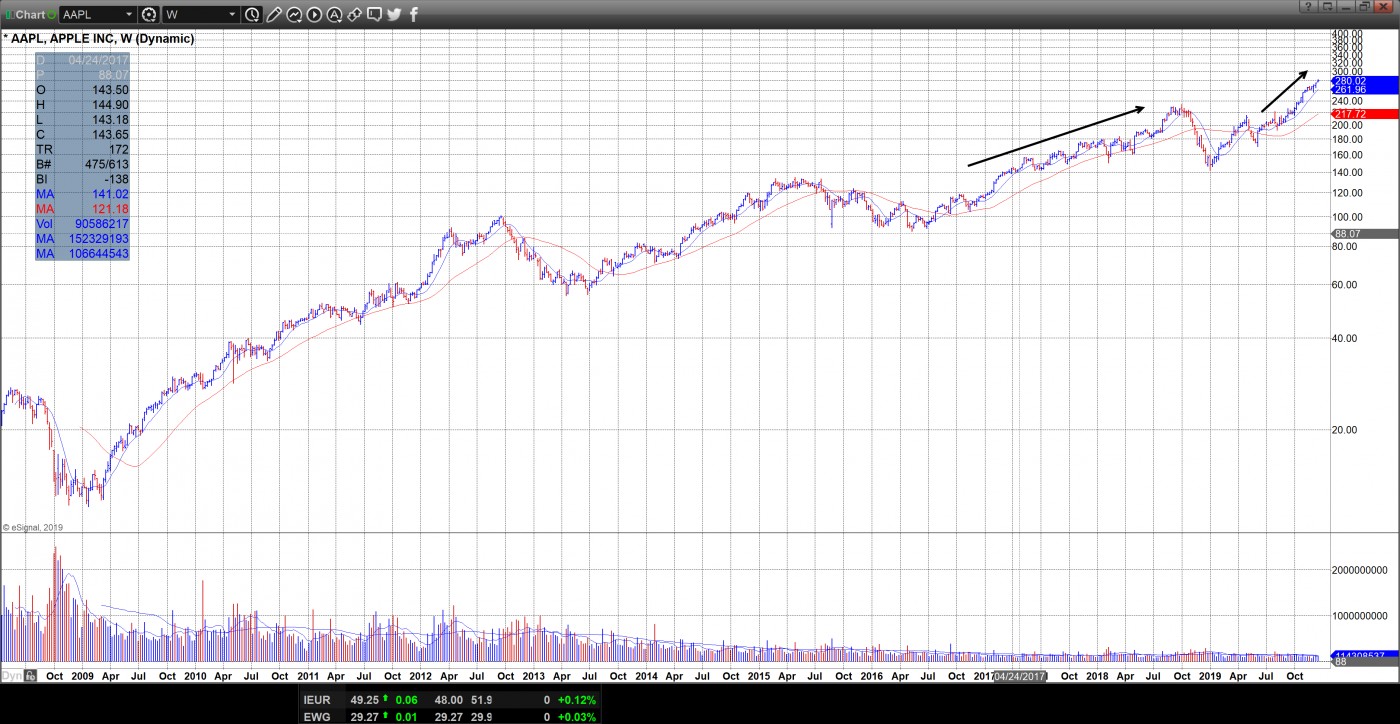