We had a query on the best website we have found for tracking the daily and intraday volume levels of major indices such as the S&P 500 and NASDAQ? We both use stockcharts.com and tradingview.com. I find tradingview.com is my preference between the two as I prefer its highly legible and workable interface for overlaying various indicators. It also has a well programmed alerts section though they charge a monthly fee if you use more than 3 alerts. Some of their indicators such as US30 which tracks the Dow Jones Industrials is in real-time at no charge.
Market Action

As for recent market action, the stock market's SUFB (straight up from bottom) uptrend would be encountering some second order issues as we have mentioned. The unemployment rate should be considerably higher than reported simply because the figures don't account for people who gave up looking for work and those who are working only part-time for economic reasons. These factors when included in the total unemployment show the rate has shot markedly higher since April than in pre-COVID months. The rate went from roughly 9% pre-COVID to 31.6% in April showing 1 out of 3 Americans is no longer gainfully employed. 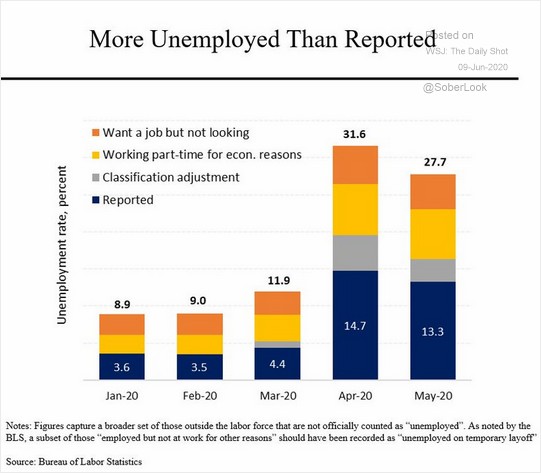 In addition, the CPI has declined 3 months in a row. This is the first time this has ever happened. Inflation is expected to cool down to a rate of 0.8%, down from 1.9% previously. Further, nearly 20% of companies in the US have debt servicing costs that are higher than profits. This is the demand shock I mentioned in prior reports. Such will further choke the lifeblood of numerous industries if it weren't for unlimited QE.

But the issue is the market hangs on Powell's every word. The correction we are seeing right now is a consequence of Powell's pessimistic view going forward. He believes the economy will recover more slowly than expected and certainly not be a V-shaped recovery. If post-2008 is any guide, the recovery could take several years or more to return to prior GDP highs. Fears on extended quarantines also rose on the report that the number of COVID-19 cases was on the rise once again.

Nevertheless, the fact remains that limitless liquidity will be present until at least 2022. The money that gets printed typically finds its way into stocks thus stocks have always found a floor of less than 10% since 2009 as long as the printing presses were rolling. The corrections of roughly 20% occurred because the Fed had ended one of their QE programs or was in the process of tightening.

Markets lost beyond 1/3 of their values in March 2020 due to the shock of the corona virus, so the Fed stepped up their game by making an unprecedented move to not just reduce both the discount and fed funds rate to 0%, but also keeping the door open to negative rates in the future. The Fed can even directly buy stocks and ETFs if they so choose to support the market.

COVID-19 cases are, once again, on the rise including in the U.S. and China which suggest prolonged or reinstated lockdown measures, so the market correction we are witnessing now could fall another several percent or more from Friday's close which is why we always advise members to keep stops tight. Never get complacently comfortable about the uptrend which has been choppy with gap ups and gap downs a standard.

Assets that hold their value against falling fiat will continue to do well over the longer term. Therefore, gold, stocks, bitcoin, and residential real estate will continue to benefit. Mortgage loan applications to buy a home in the US have already sprung back to pre-pandemic levels because interest rates are so low. In past recessions, real estate values often continued their uptrend even in falling stock markets.

Interestingly, relative to the M2 money supply, the S&P 500 is not overvalued. Just as after the post-2008 collapse, the ratio of S&P 500 market cap to M2 money supply shot lower because the Fed launched QE1. Today, the situation is similar since massive sums of M2 are being created. So this further adds to the strength of the current bull off March 2020 lows, albeit with sharp pullbacks due to various second order effects we have discussed. 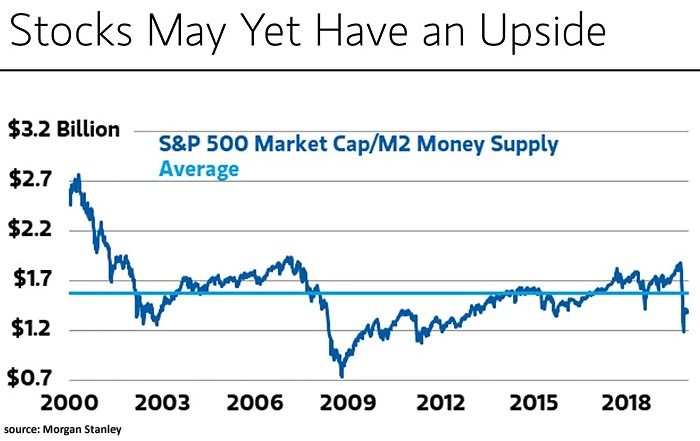 Noteworthy
As for stocks which are worth a watch or taking an action, LVGO provides digital health devices that monitor chronic health conditions. I mentioned this one during the webinar on April 27 calling attention to its pocket pivot of April 23. It had another pocket pivot on June 3, pulled back to its 20-dema on lower volume which was a low risk entry point, then broke out on Wednesday. In Thursday's sharp selloff, it found support at its 20-dema. The healthcare industry group should benefit in the post-COVID market.
The Grayscale bitcoin ETN GBTC which we have called attention to in numerous prior reports broke out on Wednesday after finding support along its 10-dma and 20-dema in prior weeks. That could have been an add point if you already had a lower average cost from buying at lower risk entry points as prior reports have pointed out. One should never initiate a position on a breakout as the risk rises typically well beyond our suggested few percent maximum. Thursday's action in GBTC underscores this point. GBTC got some support around its 20-dema. Keep in mind bitcoin itself has to sufficiently clear $10,000 as this level has met with resistance a few times now. But, just as with moving averages, often after a few knocks, the door opens. Should fear levels spike as a smaller version of March 2020, wait for the general market to find its floor. In such a scenario, GBTC is likely to get support at its 50- and 200-dmas. With limitless liquidity out to at least the year 2022, bitcoin should not just reach old highs of around $20,000 but start on a major bull run as it has always done after reaching new highs in prior bull cycles.

Now in terms of trading in a Zen state of mind, and especially in these unprecedented times, I find the saying "I know that I can't know" has always been the best Zen approach to the markets. Remember that each day brings new data points which enable one to connect the dots into a more complete picture. When the time is right, one then can take action in real-time. This action won't always be correct, but over time, if one remains organically fluid to changing conditions (which implies not getting wedded to any one idea as the only possibility), then one may stand a chance in outperforming the markets over each market cycle.
Like what you read?
Let us help you make sense of these markets by signing up for our free Market Lab Reports:
This information is provided by MoKa Investors, LLC DBA Virtue of Selfish Investing (VoSI) is issued solely for informational purposes and does not constitute an offer to sell or a solicitation of an offer to buy securities. Information contained herein is based on sources which we believe to be reliable but is not guaranteed by us as being accurate and does not purport to be a complete statement or summary of available data. VoSI reports are intended to alert VoSI members to technical developments in certain securities that may or may not be actionable, only, and are not intended as recommendations. Past performance is not a guarantee, nor is it necessarily indicative, of future results. Opinions expressed herein are statements of our judgment as of the publication date and are subject to change without notice. Entities including but not limited to VoSI, its members, officers, directors, employees, customers, agents, and affiliates may have a position, long or short, in the securities referred to herein, and/or other related securities, and may increase or decrease such position or take a contra position. Additional information is available upon written request. This publication is for clients of Virtue of Selfish Investing. Reproduction without written permission is strictly prohibited and will be prosecuted to the full extent of the law. ©2022 MoKa Investors, LLC DBA Virtue of Selfish Investing. All rights reserved.
FOR OUR FREE MARKET LAB REPORT :