We currently have five active short-sale targets. These were reviewed in our last weekend Market Lab Report covering these names which was sent out on February 26th. These are our current notes on the five stocks:

Berry Plastics Group (BERY) became a late-stage failed-base (LSFB) short-sale set-up after two breakout failures at the end of January and early February. The stock then trended sideways as it drifted back up to the prior base breakout point in early March. This is in fact typical action for an LSFB short-sale set-up. The stock rallied weakly into the confluence of its 10-day, 50-day and 20-dema lines on Friday. This puts it in an optimal short-sale position using the moving averages as a guide for a tight upside stop. Alternatively, a wider stop could be employed by using the prior 51.75 base breakout point at which the stock initially failed. 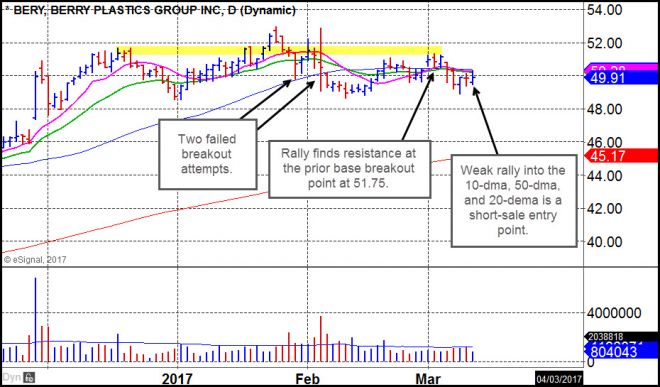 Caterpillar (CAT) had two failed breakout points before decisively breaking below its 50-day moving average last week. It then rallied back above its 50-dma but right into its 10-dma and 20-dema lines where it was in an optimal short-sale position. It then broke to lower lows before undercutting a prior low in its base from mid-December and attempting to rally.

There are two ways to handle this if one did not short the stock nearer to the moving averages earlier in the week. Either look for a weak rally back up to the 50-dma as a more optimal short-sale point, or short it here using the highs of the past two trading as upside stops. 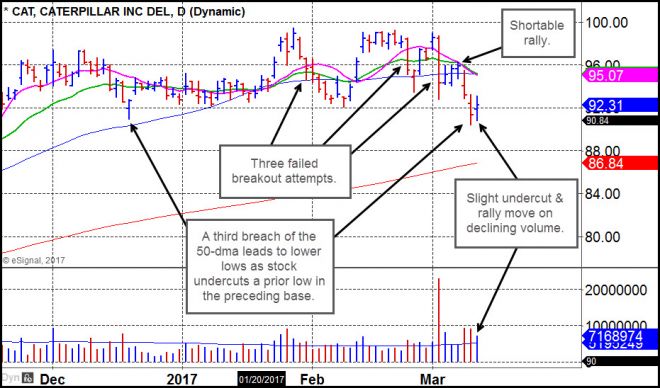 Nvidia (NVDA) has been a very playable late-stage failed-base (LSFB) set-up for the past few weeks as it has broken down and then rallied up into logical resistance a few times since staging a double-top base-failure in early February. Now the stock has come all the way down to the lows of the prior base just below the $100 price level. Optimally, we'd like to see a weak raly back up into the 20-dema or even the 50-dma as a better short-sale entry. However, we can see that the stock also appears to be finding resistance along the prior base lows and the 10-dma. Thus it could also be considered to be shortable here using the 10-dma as a tight upside stop. 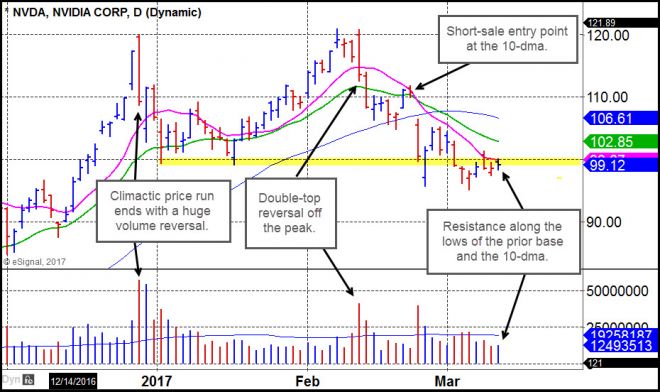 Tesla (TSLA) became a short-sale target as soon as it broke hard of of its peak after earnings in late February and moved below the 20-dema. That led to a further downside move to the 50-dma, where the stock then logically bounced in a short-term move that did not get beyond the 10-dma on the upside. This past week the stock has slipped below its 50-dma as volume increased. With the stock now under the 50-dma in what appears to be a "fractal" head and shoulders formation, it would be considered shortable here using the 50-dma as a guide for an upside stop. Alternatively, any rally back up towards the 20-dema could present a more optimal short-sale entry, should that occur. 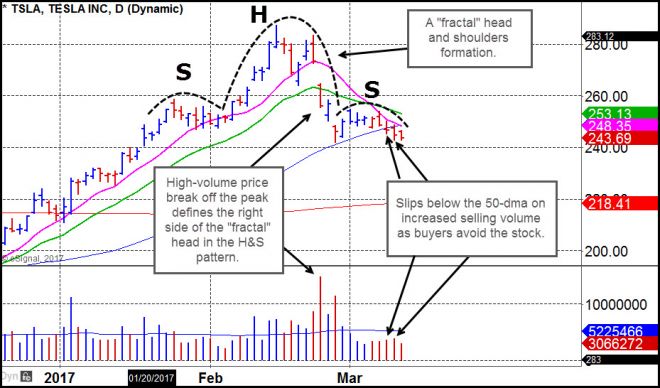 TSLA's weekly chart, below, helps to put the current action within a logical macro-context. Here we can see that the stock has had a very rapid run up the right side of a large "punchbowl" formation which has now evolved into a "Punchbowl of Death" or POD formation based on the high-volume breakdown and failure through the 20-dema in late February. That shows up as a high-volume weekly price break three weeks ago on the weekly chart. The "fractal" H&S formation that we see on the daily chart is a typical topping formation seen on the right-side peaks of POD short-sale set-up formations. 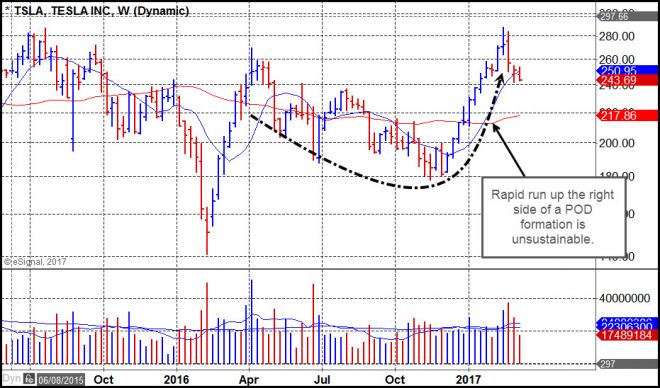 U.S. Steel (X) is another late-stage failed-base (LSFB) short-sale set-up. It is interesting to note that it has had two prior failed breakout attempts, not unlike the three we've seen in BERY and CAT. X's short rally back up to the breakout point last week was caused by a reaction to President Trump's speech to Congress where he pumped his infrastructure spending plans. The reality of just what this means in terms of big sales and earnings for X (not much, apparently) has now sunk in, leading to the current LSFB short-sale set-up. 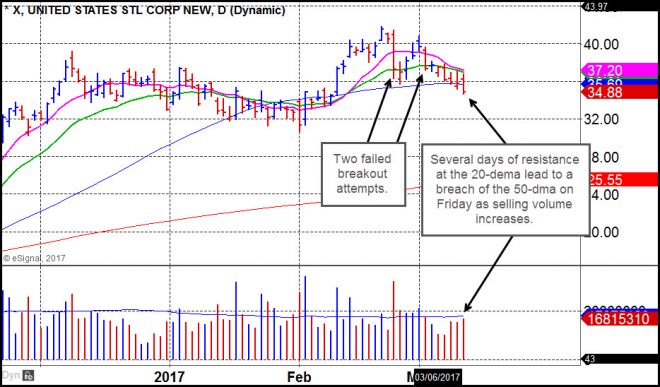 Weibo (WB) is yet another late-stage failed-base (LSFB) short-sale set-up following its late-February breakout failure after earnings. That gap-down break carried through the 10-dma and 20-dema before finding support near the 50-dma. That led to an eight-day sideways range that consistently found resistance at the 20-dema. On Thursday WB rolled below the 50-dma on heavy selling volume. This puts it in a new short-sale position here just below the 50-dma while using the line as a guide for an upside stop. Keep in mind that WB could track along here just below the 50-dma similar to how it did at the 20-dema before breaking to lower lows on Thursday. 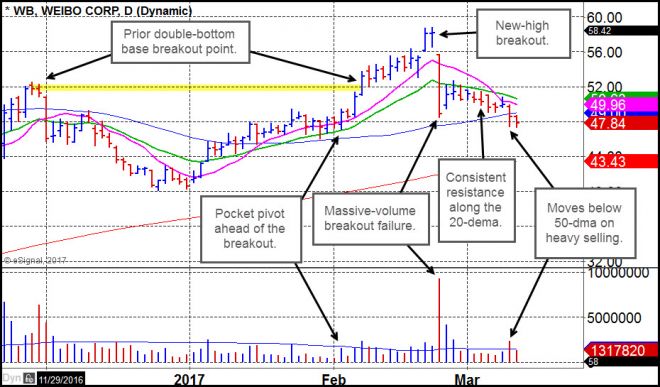 We again remind VoSI members that short-selling is a complicated and risky affair. Unless one is highly experienced on the short side we advise starting with small positions as one learns the ropes of the short side. In addition, we highly recommend that would-be short-sellers first read our book on the topic "Short-Selling with the O'Neil Disciples: Turn to the Dark Side of Trading" (Wiley, 2015), which is intended as an update and follow-up second edition to the original "How to Make Money Selling Stocks Short" by William J. O'Neil and Gil Morales (Wiley, 2004).

Our objective with our Short-Sale Set-Up reports is to provide members with generally actionable set-ups, but would-be short-sellers should have enough knowledge, gleaned from reading up on and studying the topic beforehand, to identify, on their own, specific short-sale entry points based on the real-time action of the stock and an understanding of the basic short-sale set-up's properties.