The Metaversal Evolution Will Not Be Centralized™
Some startling statistics

When the fed funds rate is plotted against the CPI rate of inflation, one can see why the Fed's hand is forced into hiking rates. We have never seen such a divergence between the two measurements. And even with manipulations by the government, the reported CPI is spiking. Meanwhile, the fed funds rate is at 0-0.25%. Tightening the balance sheet is a major headwind for stocks and cryptocurrencies. Despite how favorable various metrics look, price rules all. The stock market will have to force the Fed's hand into reversing their hawkish stance once again by correcting beyond -20%. Until then, odds seem to favor the downside. But QE remains a formidable factor so expect elevated volatility in choppy, sloppy but corrective markets. Also, should Powell imply fewer than the expected 4 rate hikes for this year, markets are likely to bounce. 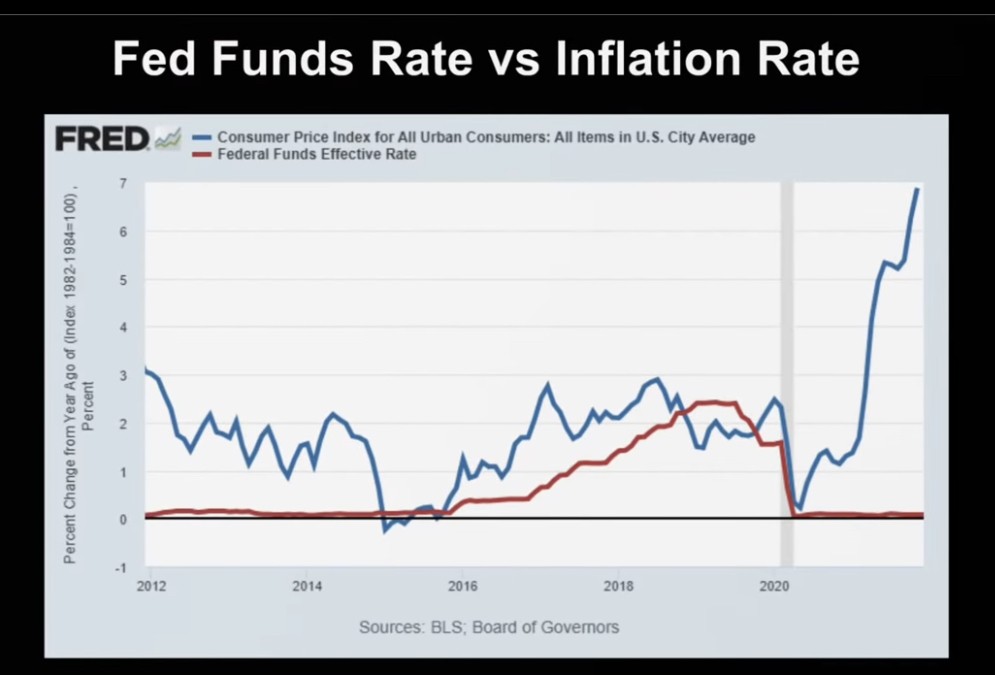 Growth of M2 money supply vs. inflation shows a spiking M2 pushes inflation higher going back to the 1940s. At times, M2 has preceded a sharp rise in inflation by more than a year. The current record spike in M2 yearly growth suggests the spike in inflation is only getting started. 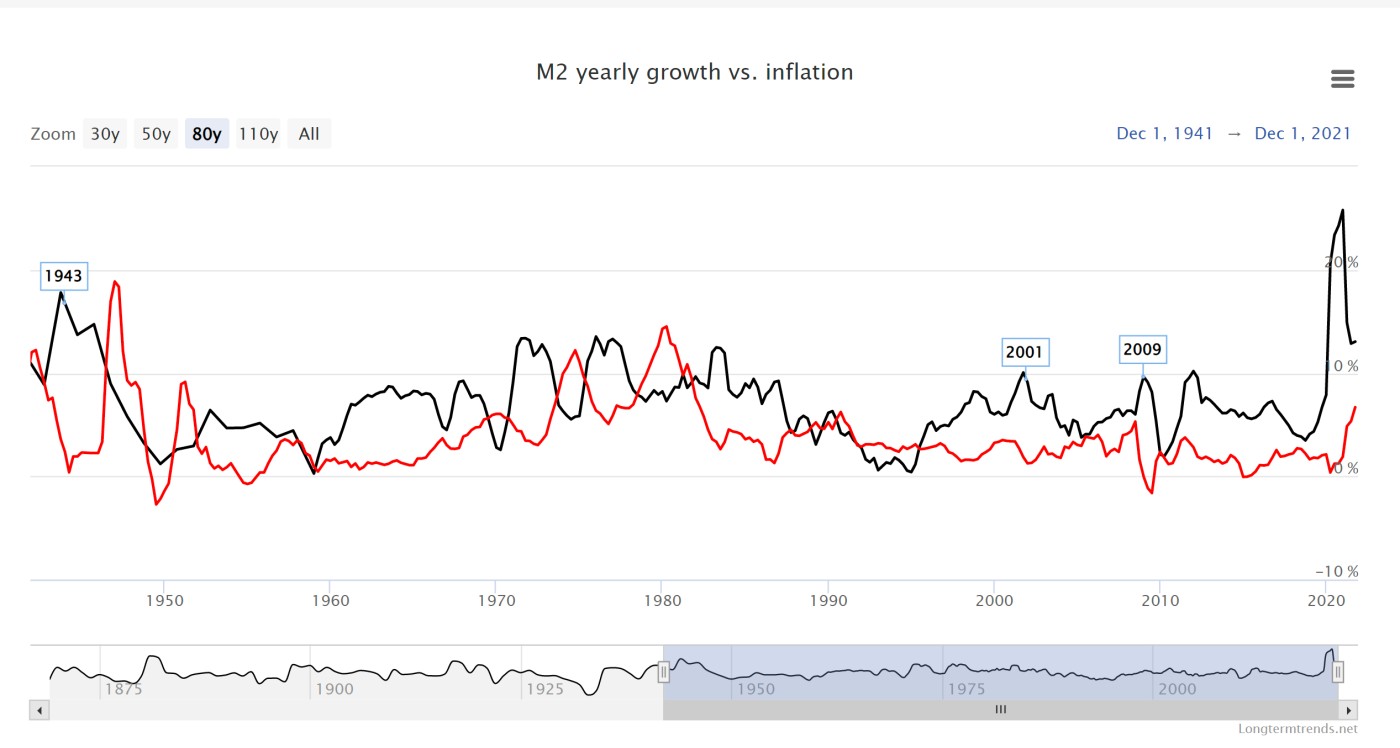 The rise in debt is also outpacing the rise in M2 as we have had record levels of expansion.

When you breakdown inflation across various groups, everything is up from CPI, core CPI, services, goods, food, and energy. The UK reported rates of inflation at 40-year highs. Energy costs in the EU have soared 50-67% over the last 12 months. Many cannot afford the heating costs this winter as their real wages have not nearly kept up with spiking inflation. 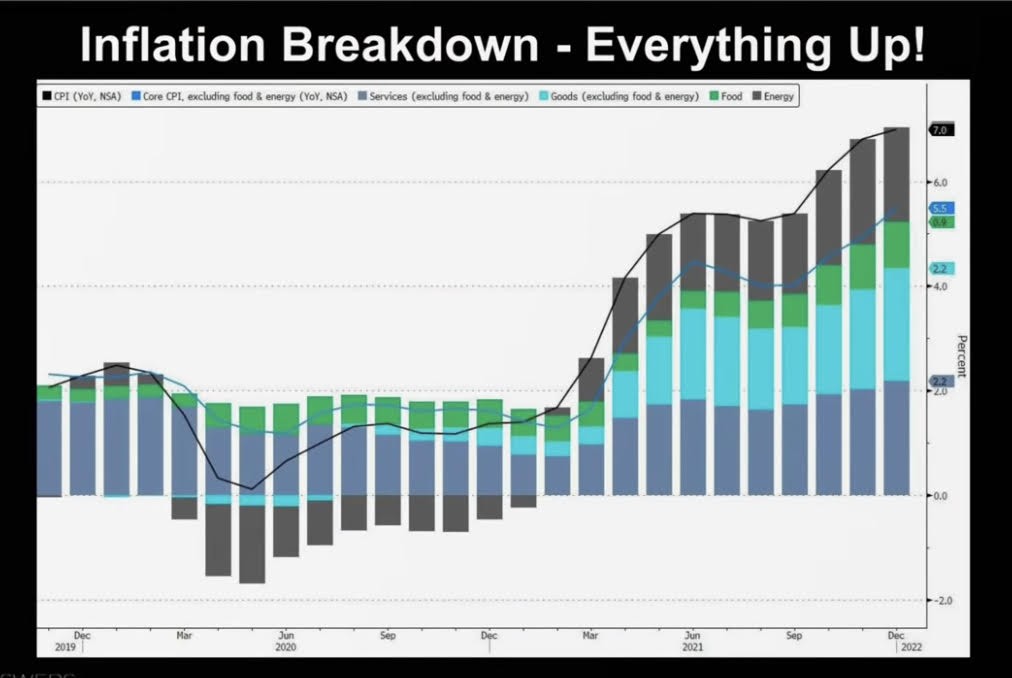 In the more conservative estimates, inflation was up 7% in 2020 then 15% in 2021, so if you did not get a 22% raise over the last 2 years, you're behind. In consequence, most everyone is behind because the median income fell 3% in each of the last 2 years.

Another interesting plot is the M2 money supply growth minus GDP growth. Since 1970, both variables were in line with each other. But since 2019, the difference between the two measurements had spiked to record levels. 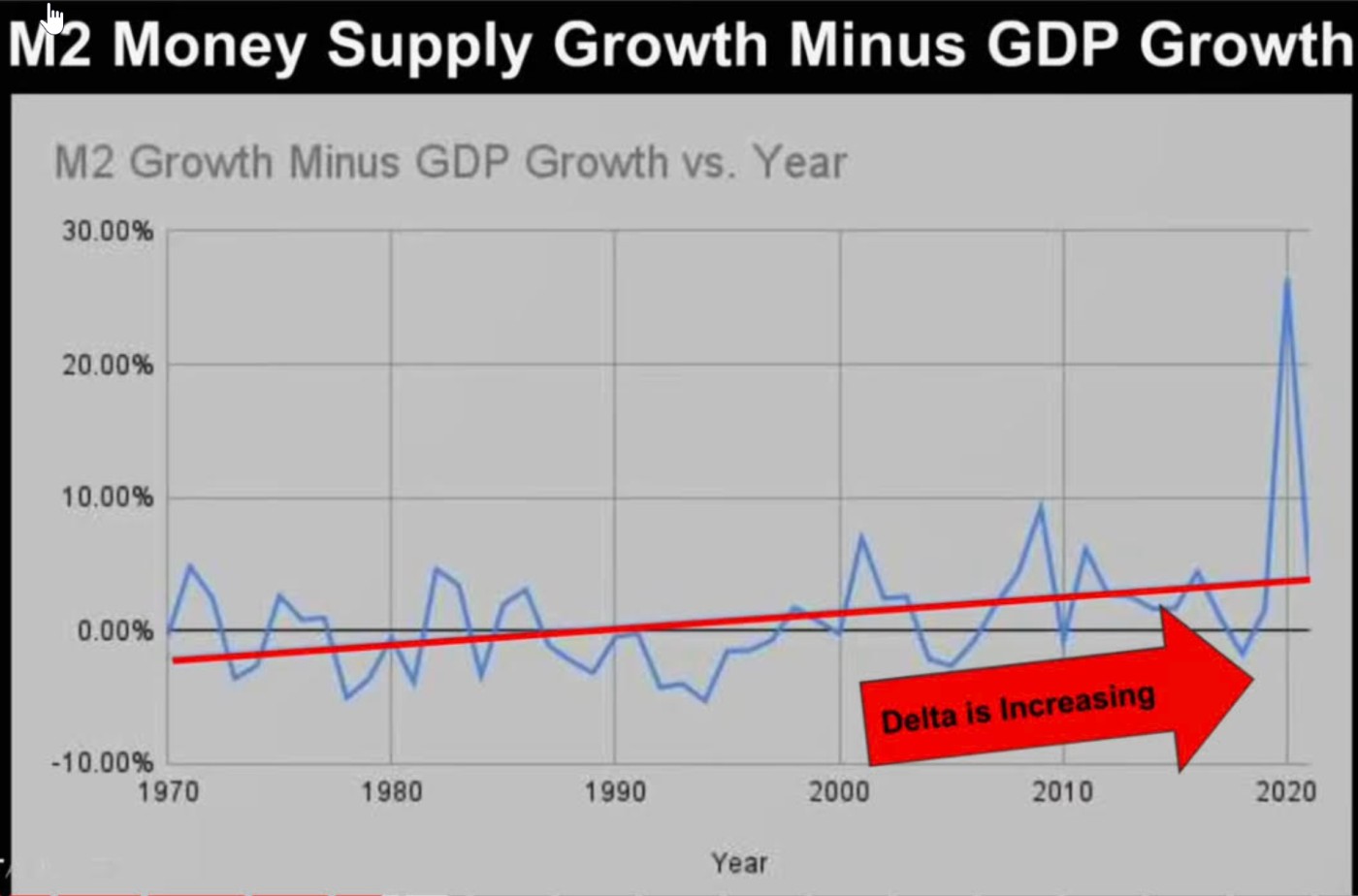 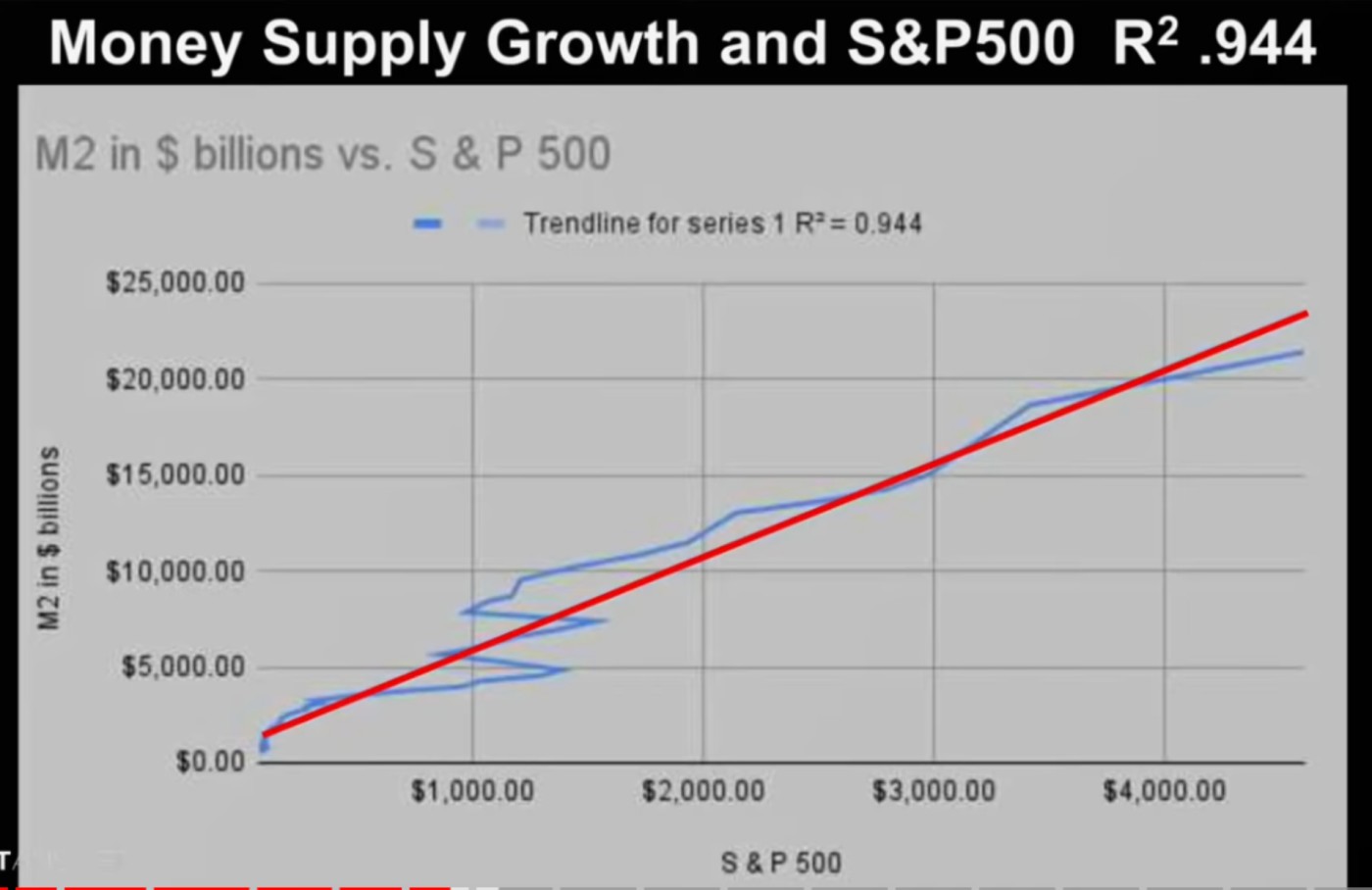 If you plot the S&P 500 vs debt, there is a close correlation up until 2020 when debt hockey sticks higher. This suggests the value of stocks, while continuing to also rise, may not keep up with inflation since debt spurs inflation. 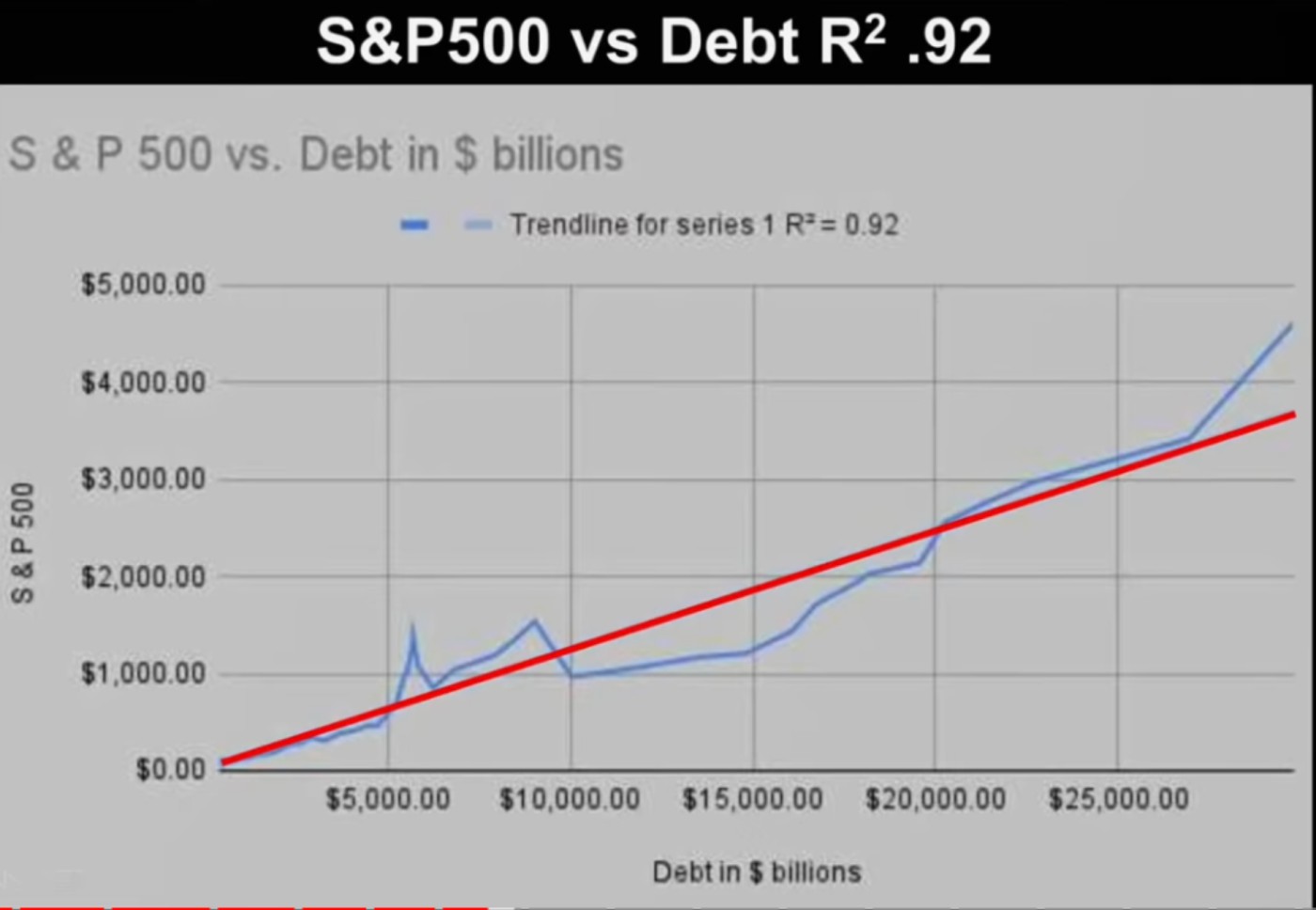 About half a century ago, the legendary Milton Friedman said, "Inflation is always and everywhere a monetary phenomenon in the sense that it is and can be produced only by a more rapid increase in the quantity of money than in output."

In other words, the debasement of fiat accelerates and outpaces GDP, the higher inflation rises.

So to sum up, while tapering is occurring, any meaningful tightening will not happen. M2 will continue to grow over 15% YoY. The Fed's target rate of inflation is 2%/yr. To reach this level, M2 growth would have to be reduced by at least 66% which would take it down to 5% from its current 15% YoY. But such a drop in M2 would crush GDP growth and unemployment. Further, incrementally higher interest rates will not bring down inflation as history has shown over the long cycles. Also keep in mind that the volumes of excess money that have been created have long inflation tails, meaning excess money in the system will have an inflationary impact at least two years out. So even if no more money was created which seems to be a historic impossibility, the U.S. would still have an inflation rate of at least 8%. A sobering thought. This same issue is happening around the world since economies are deeply connected more than ever before.

The WEF (World Economic Forum) should be renamed the WAF (World Authoritarian Forum). Klaus Schwab who is the founder said, "The pandemic represents a rare but narrow window of opportunity to reflect, reimagine, and reset our world." He may be part of the "150" which is, in what self-made billionaire and straight talker Chamath Palihapitiya revealed, a group of people with more money and power than God. It is not a fixed number as some fall out while others are recruited, but rather an organic process that takes place. As it has been said, water finds its level. It only took a handful of people around the planet who hold high positions to take advantage of C19 to lockdown, quarantine, and deny freedom of movement while enforcing vaccinations or lose your jobs and your livelihoods. A government never lets a good crisis go to waste. Chamath said in an interview that he was invited into this group, but then declined and whistle blew when he understood its underlying ideology - that humans are merely ants to be controlled and manipulated.

Only blockchain technology stands a chance at decentralizing power structures thus materially reducing corruption. The exponential growth of DAOs, DApps, DeFi, DEXs, and NFTs suggest the great reset will not be a dystopian world of maximized control and corruption but rather a more decentralized world of individual empowerment run on web3 #discord #metaverse with maximized freedom of choice, freedom to be true to one's nature, freedom from censorship, freedom of speech, and freedom from the cancel culture. Political correctness, being woke, and virtue signaling are all hateful, divisive, and exclusionary. They are actions taken against others cloaked in an illusory, false armor of virtue.

Powell's stance on interest rates when the 2-day Fed meeting concludes at 2 pm EST is likely to be less hawkish due to recent market action. The NASDAQ Composite was down -19.3% and S&P 500 -12.4% peak-to-trough. In past corrections, the Fed Chair would step in and reverse his tightening decision when the major averages fell below -20%. The last time this was done was in Jan-2019 shortly after the first xmas crash on record.

He will speak with carefully measured words as always. He will likely emphasize the slowing economy as justification to hike rates gently. Nevertheless, the flattening yield curve suggests Powell has less room to tighten than ever before since QE started in late 2008. Certainly the idea of hiking the discount rate several times as he did between 2017 and 2018 is highly unlikely without inducing a major crash. Nevertheless, markets could have an extended dead cat bounce if he doves things down a bit due to the recent market turmoil.
Like what you read?
Let us help you make sense of these markets by signing up for our free Market Lab Reports:
This information is provided by MoKa Investors, LLC DBA Virtue of Selfish Investing (VoSI) is issued solely for informational purposes and does not constitute an offer to sell or a solicitation of an offer to buy securities. Information contained herein is based on sources which we believe to be reliable but is not guaranteed by us as being accurate and does not purport to be a complete statement or summary of available data. VoSI reports are intended to alert VoSI members to technical developments in certain securities that may or may not be actionable, only, and are not intended as recommendations. Past performance is not a guarantee, nor is it necessarily indicative, of future results. Opinions expressed herein are statements of our judgment as of the publication date and are subject to change without notice. Entities including but not limited to VoSI, its members, officers, directors, employees, customers, agents, and affiliates may have a position, long or short, in the securities referred to herein, and/or other related securities, and may increase or decrease such position or take a contra position. Additional information is available upon written request. This publication is for clients of Virtue of Selfish Investing. Reproduction without written permission is strictly prohibited and will be prosecuted to the full extent of the law. ©2022 MoKa Investors, LLC DBA Virtue of Selfish Investing. All rights reserved.
FOR OUR FREE MARKET LAB REPORT :