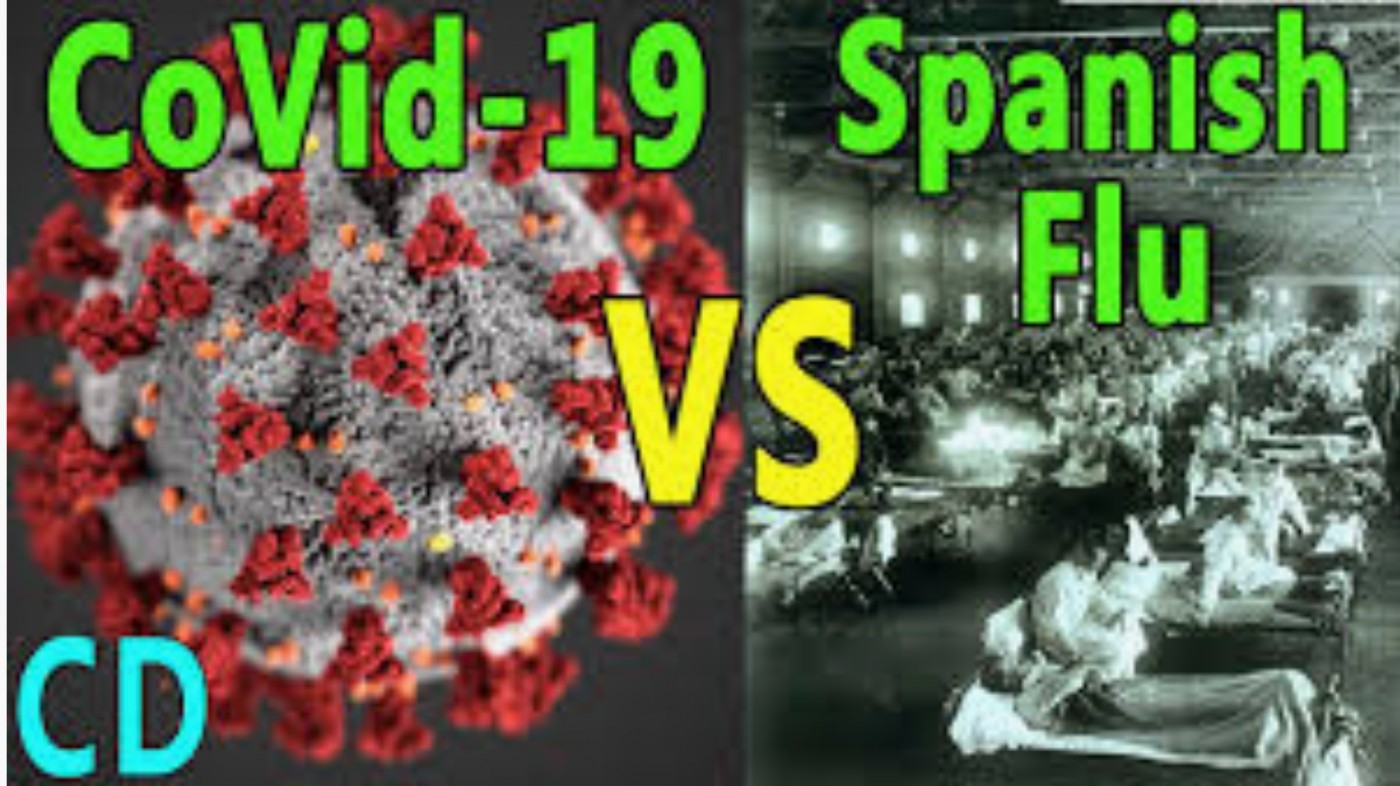 If we compare the worst pandemic since the year 1900, the Spanish flu killed nearly 2% of the world's population. Back then, the Fed actually raised rates in 1917 to 4.5% then kept them steady in late 1917 when the first wave of the flu hit. Despite this, the recession in 1917 was mild and brief. There was no economic lockdown, though businesses did suffer which caused the 1917 recession and market correction where the Dow Industrials lost just over one-third of its value.

Given how much worse the Spanish Flu was than COVID-19, the stock market only dropped by a third despite no economic lockdown, underscoring the relatively mild recession of 1917. This then begs the question of whether today's economic lockdown is not a product of fear mongering by the mainstream media press who of course is largely under the control of those who hold power. But who holds power? Edward Snowden has discussed this in detail on a recent interview he gave. He says the President of the United States is only a 4 or 8 year term position while those who sit in high position in agencies including the CIA, NSA, and USSS are often career officials who are the actual custodians of power. There exists a deep chain of command.

The President upon being elected gets debriefed on what are called "covert action findings" on issues such as the global situation concerning the state of terrorism. These governing bodies must get the newly elected President on their side because they need the President to sign off on whatever they do, after all, the President is responsible for the executive branch which is made up, in part, of these agencies. Knowing the President has just been on trial by fire to get elected, the agencies pressure him to go along with their agendas. The masterstroke is that if the President agrees with what these agencies want, he won't get in trouble because everything is classified.

So perhaps it is no coincidence that both Stanford and Oxford Universities claim the actual fatality rate of COVID-19 is potentially equivalent to the flu on the basis of preliminary numbers that show most healthy people under the age of 60 are largely asymptomatic, or at least nowhere near the initial 20- to 100-fold numbers painted by the press. Data are starting to show the average age of a true COVID-19 death is equal to or greater than the average life expectancy in the U.S.

Should such be the case, the massively severe economic hardships that are a consequence of the lockdowns were largely unnecessary but serves to further widen the wealth gap, supercharging social unrest. The middle and lower classes have had their livelihoods compromised. Ray Dalio has written that we have not seen such levels of populism since the Great Depression. Perhaps a more moderate, rational approach of certain social distancing practices and other measures would have been a wiser course.

Corona has become politicized so many journalists, activists, and politicians focus on COVID-19 fatalities instead of a balanced approach of accounting for the second and third order effects caused by the unprecedented economic lockdown. Lost jobs and livelihoods have consequences. They forget stress is a silent killer. Indeed, in any given year, an average  total of close to 60 million people die. It would come as no surprise to see this number increase not as a result of actual COVID-19 deaths but due to second and third order non-COVID related effects.

Then there are the concerns about expansionist authoritarian law spreading across an increasingly socialist America. Did the government not use prior crises such as 9/11 and the financial collapse in 2008 as an excuse to pass rights crippling laws "for our own protection"? The Patriot Act, Rave Act, and other laws passed in a reactionary manner are submitted for your disapproval.

Second order effects are monstrous as a consequence of sheltering in place. A qualified physician asks if the 0.03% fatality rate in California based on the proper tallies, as opposed to the earlier massively misguided numbers, justifies the quarantine. 96% fully recover with no after effects. Many patients with serious conditions unrelated to COVID have been scared to go to the hospital for fear of catching COVID so have died as a consequence. Hospital volumes have been at record lows as patients in need of non-COVID care stay home.

Clinics across California have observed the damage done by secondary effects from stay at home quarantines. As an aggregate, clinics have reported spiking levels of child abuse, spousal abuse, alcoholism, anxiety, depression, suicide, and joblessness, not to mention the direct economic consequences of collapsing prices seen in oil, commercial real estate, airlines, hotels, and restaurants. These industries among others may never fully recover while other industries will thrive as a result of a major pivot in mindset.

Inevitably, limitless QE-born liquidity can drive stock prices much higher, well beyond what any sane mind would expect, which of course further enriches those who hold stock. This is not a judgement call but a clarification of the facts. One must operate on the basis of how to best profit from industry groups and stocks that stand to benefit the most from a post-COVID environment since that is the point of this website. Help oneself first, then one can help others.

Post-COVID talk says personal surveillance is the future and personal privacy is the past. Coronavirus catalyzes this so everyone's health can be tracked. This is a double-edged sword. Certain countries such as China and Singapore already practice an early form of this, thus were able to effectively enforce stay-at-home lockdowns through people's mobile phones. 5G technology will facilitate this surveillance state. But a partial decentralization of governments will tackle such invasions of privacy. Blockchain tech together with AI will revolutionize the way people are governed over the next generation. Blockchain, AI, VR/AR/MR, and other bleeding edge technologies are growing at an exponential rate. This will ultimately empower the individual at the cost of any centralized, corrupt state. From centralization to decentralization. Decentralized autonomous organizations, or DAOs, along with decentralized applications, or DApps, are seeding the landscape. This has already been achieved with bitcoin for borderless transaction of value and p2p bit torrenting for borderless transaction of data, both which are ultimately outside the control of anyone or any government. Even if the internet was shut off, mesh networks have been built to override such a situation. Even if electricity was cut, technologies are already in place to address this so bitcoin and the internet would continue onwards and upwards in some form even if forced underground. There are always solutions to override any moves made by any governments. Indeed, Forbes published an article on how the dark web which facilitates both legal and illegal transactions has been one of the fastest growing economies due to the growth of corrupt governments. It had grown to $11 trillion at the time the article was published some years ago.

Leading companies that will benefit from the exponential growth in these technologies include AAPL, FB, GOOG, and AMZN. AAPL pulled back to its 10dma on Wednesday after Powell had sobering thoughts about the economy going forward. Two companies doing well are FB and GOOG, both which gapped higher on strong earnings on April 29. Both have since pulled back and are sitting between their respective 10-dma and 20-demas.

We have received some questions on the post-COVID environment for real estate. It does appear that the real estate market, especially commercial real estate, are in for rough times. Twitter pays a lot of taxes in San Francisco for their offices, but now they're leaving. Talent can be found anywhere. Many companies who had layoffs are finding talent in other parts of the world for much less so hiring them remotely. The third highest cost is facilities and real estate, so allowing employees to work from home saves the company huge sums. Indeed, the future of work is changing.
Hugely successful angel investor Jason Calacanis thinks commercial real estate will collapse in high priced, high taxation cities such as San Francisco. He says California is doing everything it can to push great companies out due to its socialist, anti-capitalist impulses with its over-regulated landscape and high taxes. Being a huge force in Silicon Valley, Calacanis says many companies in Silicon Valley want out of California. Twitter has said employees can work from home forever. Many employees are migrating to more attractive cities with a lower cost of living knowing they can work from remote. There is a $40k premium for a company to hire an employee in Silicon Valley due to cost of living, schools, rent, and so forth. Gen Xers and baby boomers believed you couldn't manage anyone unless they were on site. Younger companies are realizing this is nonsense.
So potential shorts would be specific REIT-based ETFs that are exposed to commercial real estate. As a general rule, a proper enter point would be when such trades up into an areas of resistance. Broad-based commercial Real Estate ETF (VNQ) and mortgage REIT ETF (REM) are possibilities. They are unable to keep pace with the major averages suggesting inherent weakness but both are fighting to break above their 50-dmas. Another real estate REIT is XLRE which has found resistance at its 50-dma. Because many are unable to pay their rent, apartment REITs AvalonBay (AVB), Equity Residential (EQR) and Essex Property Trust (ESS) are all short candidates. Corporate Office Properties Trust (OFC) and Brandywine Realty Trust (BDN). BDN is probably the weakest performer of the bunch.