The Metaversal Evolution Will Not Be Centralized™
Stagflation

According to the UK's National Institute for Economic and Social Research, "The war could cut $1 T from the value of the world economy while stoking inflation this year by causing another supply-chain crisis." In consequence, the Atlanta Fed cut its Q1 GDP estimate to zero, down from 6%. The risk of global stagflation has materially increased with soaring energy prices (oil, natural gas). U.S. earnings revisions have turned mostly negative since May 2020. Meanwhile, the spread between 2-yr and 10-yr Treasurys is closer to inverting with the spread between 25-30 bps, down from 80 bps a couple months ago. This suggests the market expects the Fed to begin its tightening cycle but with little room for more than a couple of token rate hikes.

Some analysts say the reaction across various markets is due to Russia, but before the Russian situation emerged, yield spreads were already narrowing due to Powell's new hawkish stance in late 2021 when he removed the word 'transitory' thus implying inflation could become a real problem in the long run. On Dec 14, 2021, the Market Direction Model switched to a SELL signal due to his change of mind. While cross currents can create much noise, the market remains in a firm downtrend, thus the model remains on a SELL signal. That said, the market takes the stairs up but the trapdoor down so expect continued heightened levels of volatility.

In the 1970s, stagflation was spurred by two major oil shocks. This drove demand higher for bonds, gold, and real estate. In fact, gold had a massive move of about 1500% from 1971-1980. Oil was up over 1000%. The Russian situation if prolonged would spur the already overheating levels of inflation thus higher prices across the board with no country exempt. This would further drive the divide between the top 1% and the bottom 90%, spurring civil wars.

While the Russia-Ukraine-NATO situation is unusual to many, it has happened many times before over the centuries. The war is likely to extend beyond Ukraine if backing down would be ruinous to Putin who lives on borrowed time. His health remains in question, so what if Putin were to disregard the mutually assured destruction (MAD) that would occur in an all-out nuclear attack? NATO allies hopefully realize a ruinous exit could force Putin's hand into nuclear war, so would hopefully provide a hard but non-ruinous exit. Note, MAD does not suggest the end of the human race, but nevertheless, horrible consequences.

What if China were to support Russia by allowing Russia to use its clearing system via e-CNY which would also reduce US sanction powers over SWIFT? This is less likely as China and Russia are not allies. A U.S. State Department official warned that President Xi of China will face "serious consequences" if it helps Moscow avoid sanctions.

A positive change would be the forcible removal of Putin since conditions are bleak for the Russian people. Perhaps a Russian revolution awaits.

Another issue is if Russia was to use bitcoin to partially circumvent sanctions, would that prompt a hardline regulatory response from the US towards bitcoin? This is unlikely as Russia cannot use crypto in any substantial manner to move assets.

The greatest risk of a hot war is when both sides are comparable in military might. Russia has spent massive sums on its military so while it lags the West in everything else, its weapons capacity is equivalent to NATO's. Indeed, Putin has warned the West would feel the wrath of Russia if pushed too hard, reminding the world that while Russia may lag the superpowers in many regards, it has a powerful arsenal of nuclear weapons. That said, the U.S. has a formidable defense if attacked by such weapons, putting Russia on its backfoot. In an attack of 300 warheads (20% of the Russian long-range arsenal), it is estimated that only two warheads would get through.

Still, a hot war would cost far more in lives and money thus be considered reckless and catastrophic, the question is whether Putin would care enough about triggering such consequences.

The Cuban Missile Crisis was as close as the world has come to nuclear war, but Khrushchev, Russia's leader at that time was arguably less likely to push for MAD. Putin allegedly has a terminal illness so has little to lose. Putin is a Stalinist thus wants to restore Russia to its former glory, ie, he sees Russia as the world's dominant or only remaining power even if it means a dire global fatality rate.

History shows the countries most likely to win hot wars are not the most powerful but the ones who can endure the most pain. In this sense, China and Russia are in a psychologically better position since their leaders are willing to sacrifice a large number of their populations for global domination.

Wartime economics such as during World War II shows most countries had rationing, production and price controls, import/export restrictions, and takeover of their respective central bank. Bond and equity markets often were closed along with asset price controls and ownership restrictions while the top marginal tax rate jumped. Investors were often unable to access their capital. Due to the uncertainties, fiat was often not accepted because of the concern some currencies could lose great value depending on the outcome of war. Gold was instead the asset of choice. In today's world, bitcoin continues to eat into gold's market value because large sums can easily be moved, it is censorship resistant, it cannot be counterfeited, it is more theft proof and scarce, and it is decentralized: 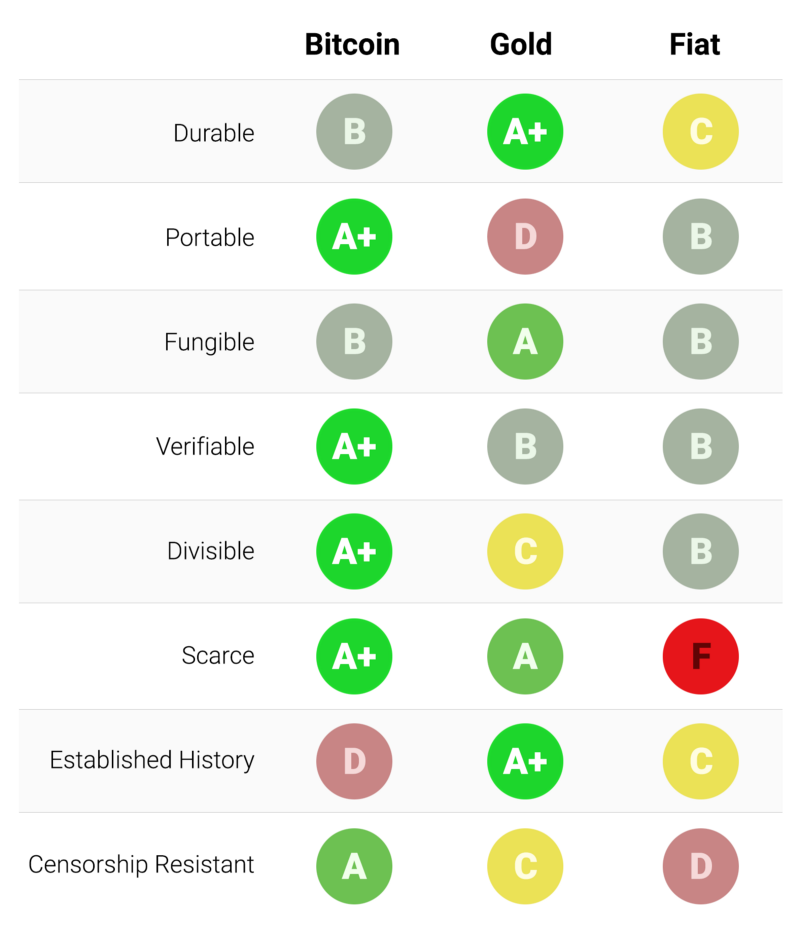 That said, both gold and bitcoin would probably hold up well should the current fighting between Russia and Ukraine become more widespread due to forced money printing in times of war. Compared to pre-WW 2 when President Roosevelt ordered Americans to turn in their gold, bitcoin enables anyone to protect their wealth against any assets that could fall in price including fiat, stocks, bonds, and real estate. Bitcoin also overcomes any limitations in capital mobility. In past hot wars, bonds were sold for gold because wars are financed by the borrowing and printing of money which devalues bonds and fiat.

At any rate, until Powell signals a delay of future rate hikes as he did in Jan-2016 or a potential reversal to his hawkish position as he did in Dec-2018, expect the choppy downtrends to continue.
Like what you read?
Let us help you make sense of these markets by signing up for our free Market Lab Reports:
This information is provided by MoKa Investors, LLC DBA Virtue of Selfish Investing (VoSI) is issued solely for informational purposes and does not constitute an offer to sell or a solicitation of an offer to buy securities. Information contained herein is based on sources which we believe to be reliable but is not guaranteed by us as being accurate and does not purport to be a complete statement or summary of available data. VoSI reports are intended to alert VoSI members to technical developments in certain securities that may or may not be actionable, only, and are not intended as recommendations. Past performance is not a guarantee, nor is it necessarily indicative, of future results. Opinions expressed herein are statements of our judgment as of the publication date and are subject to change without notice. Entities including but not limited to VoSI, its members, officers, directors, employees, customers, agents, and affiliates may have a position, long or short, in the securities referred to herein, and/or other related securities, and may increase or decrease such position or take a contra position. Additional information is available upon written request. This publication is for clients of Virtue of Selfish Investing. Reproduction without written permission is strictly prohibited and will be prosecuted to the full extent of the law. ©2023 MoKa Investors, LLC DBA Virtue of Selfish Investing. All rights reserved.
FOR OUR FREE MARKET LAB REPORT :