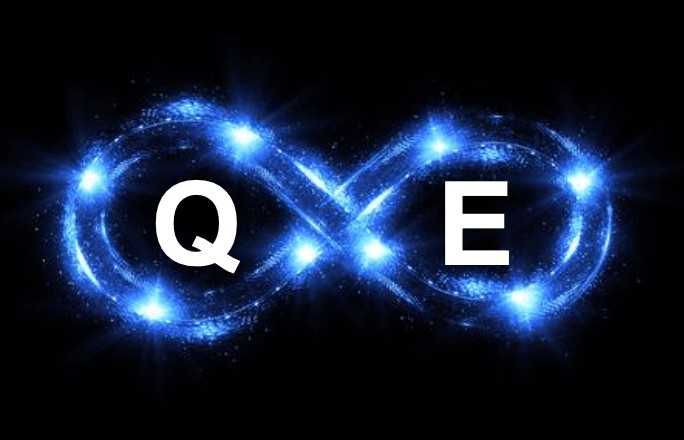 The NASDAQ Composite and S&P 500 are getting support at their 50-day moving averages. Where they go from here will have much to do with when significant levels of additional stimulus are approved. The Federal Reserve in its politico speak is yearning for more stimulus at present though has said at times they will not be printing more money or lowering interest rates. The market does not trust the Fed as they know the Fed is a political body and will have no choice but to do both.

If you look at the yield on the 10-year government Treasury, it continues to chart a sloppy downtrend going back to the 1980s that correlates roughly with the Fed Funds Rate. The downtrending line shows rates could go negative before the end of this year if 10-year Treasurys continue to hold true to this downtrending line. But if not in 2020, certainly in 2021. If markets believed the Fed, the graph would look differently. Further, major indices are attempting to bounce as they believe a stimulus bill agreement may be reached sooner than later despite Trump's tactics of playing hardball with Pelosi by shutting down negotiations only to hours later suggest alternatives which accounted for Wednesday's market rally. 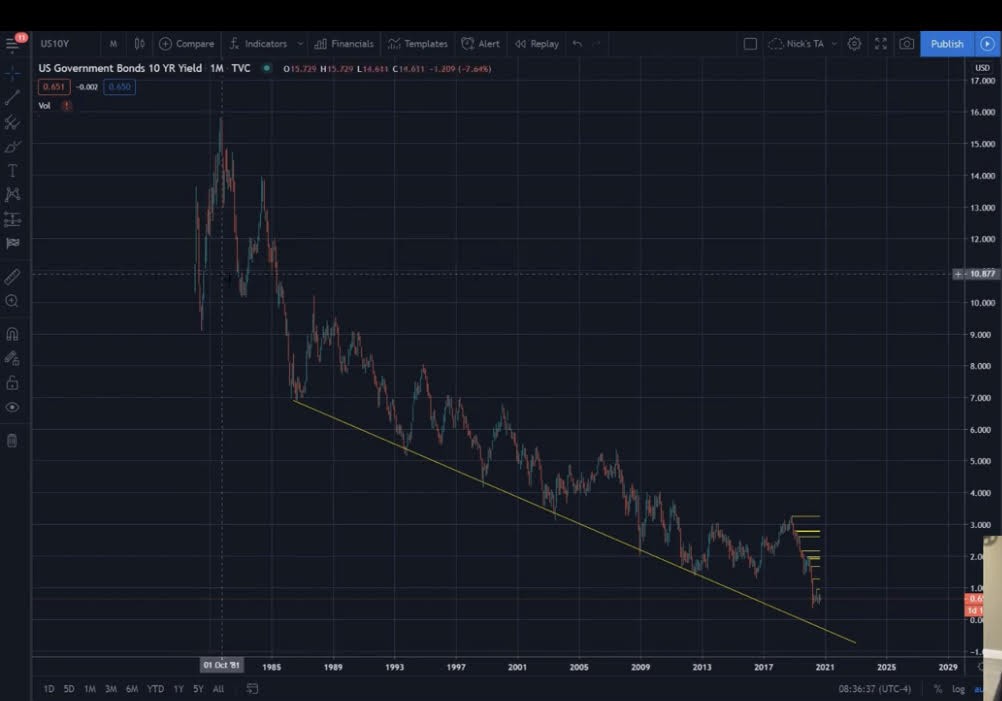 But in the meantime, markets hate uncertainty so expect more choppy, volatile action in the major averages. This is one reason why follow through days, though still somewhat relevant in certain market contexts, have less reliability than in non-QE markets. It is easier to get a random day on higher volume that is counted as a follow through day, but context is always key. In markets that carry less noise from QE, follow through days had more merit when also backed by action in leading stocks. But context is even more important in today's markets due to the elevated levels of noise which can make past indicators less reliable. Action in leading stocks is blurred somewhat by monumental levels of QE which finds its way into many stocks. As we have said, stocks have been pushing on a string fueled by QE. Nevertheless, tech has led over the years and continues to be a beacon of sorts.

How To Reduce Your Fear of the Unknown

My webinar intros I give each week often spur questions from members and those on other sites who catch these on a delayed basis regarding the state of the world given the unique situation in which the world finds itself as COVID is an accelerant for pushing out the record levels of debt, historically low interest rates, plunges in global economies, rescues by unprecedented amounts of currencies being printed, economic lockdown durations, COVID waves since the second wave of the Spanish Flu in 1917 was far worse than the first wave, and deep concerns not just about these but other issues. I know in some cases, some investors have reduced their exposure to the markets as a consequence of this pervasive fear of the unknown, so I try to help connect the dots for deeper understanding so investors may see the light at the end of the tunnel, thus take advantage of what is likely to come. This is one of the reasons I started the crypto section of this site as I believe the cryptospace whose valuation tends to grow by an order of magnitude every few years will continue at this same pace. It's value stands at about $350 billion but if history is any guide, its value should be at $3.5 trillion within the next few years or less. This means bitcoin and key alt coins should move up in value by at least this much. In prior crypto bull markets, leading alt coins moved up by 100-fold or more in just a couple of years. 2017 alone was a year for the history books as nothing in the history of speculation ever saw such sharp price rises in such as short period of time.

In any event, I've discussed Ray Dalio of Bridgewater because he has done an excellent job in analyzing centuries worth of market and political data to reduce the fog, clean the glass, and show us where we currently stand in this long term debt cycle, and where it might lead. I have attempted to answer some of Ray's questions in terms of how exponentially growing technologies (expotech) today did not exist in prior cycles, thus could help soften any major paradigm shift as blockchain, AI, and other such bleeding edge technologies are wealth creators while government money printing creates no wealth but buys time by postponing market crashes. But this time is valuable as it allows expotech to evolve.

A  number of questions surround what people should do with their cash whether its in dollars, pounds, euros, or yuan. Of course, many wealth Chinese have converted their yuan into bitcoin to move more than the maximum allowable limit of $50,000 equivalents out of China. Many Chinese trade alt coins. Same for Koreans and Japanese.

I send them to our website where they can get answers to their questions in the form of these webinar introductions which then get sent to everyone. Indeed, a number of my metrics have been showing bitcoin and thus ethereum and other alt coins are ready to move or resume their uptrends once an approved stimulus package comes through.

In consequence of more QE to come as Trump knows it is to his advantage to go into the election with additional stimulus fueling the markets, we have a market where there has been a higher inverse correlation between the dollar and other instruments. A stronger dollar means lower prices for stocks, gold, and bitcoin. A second major stimulus package which is imminent may push the dollar back into its downtrend which began in March of this year after a huge stimulus package was launched which caused the major averages to find a major low. Such stimulus would be bullish for stocks, gold, and bitcoin. A strong dollar hampers U.S. economic growth while increasing levels of debt, so such dollar strength will never work in this environment. The Fed therefore must weaken the dollar and stimulate the economy by running the printing presses even faster.

I know I've talked about bitcoin a lot since 2013 to many. While I've been sharply criticized by the uninitiated for my bullish views, even though the price of bitcoin has exonerated me, at least today, more people understand its significance. In the earlier days, I felt like I was back in 1995 when I started the first version of this website to much criticism about how the internet was used for porn, credit card fraud, and the like. I was told by some I'm wasting my time. Congress held talks about how they were going to have to control such a technology. In a similar parallel, bitcoin has been criticized for money laundering and other illegal activities. But perception is changing at long last with the onboarding by major companies.

Microstrategy is one of a long line of companies to buy bitcoin to stave of fiat devaluation. Its founder Michael Saylor who bought $425 million worth of bitcoin tweeted, "I considered investing our treasury in fiat, bonds, stocks, swaps, index funds, options, real estate, commodities, precious metals, art, & intangibles before settling on #Bitcoin. It seems like the ideal long duration asset – I don’t understand why anyone would want to trade it." He then tweeted, "For 953 million people in 20 countries with weakening currencies, bitcoin represents something greater than a treasury asset. For them, it's more like an ark of encrypted energy to escape the flood."

Indeed, with all the money that has flooded the system, more than $10 trillion in savings in the U.S. earns virtually zero percent interest. This is about to turn negative.

Gross federal debt stands at $30 trillion. What happens when the yields on some of these Treasurys turn negative? U.S. Treasurys are the most trusted, relied on bonds in the world. There could be a run on Treasurys to escape negative yields as we are seeing in Germany. Where would the capital go? Hundreds of trillions of dollar equivalents are locked up in savings or government bonds. Meanwhile, blockchain based cryptocurrencies are increasingly deriving their value independent of a central bank's actions as there remains a high correlation to bitcoin which cannot be inflated away as its supply is based on strict mathematical code. So goes bitcoin, so goes the blockchain/cryptocurrency market.

The US has printed more money so far in 2020 than in the first two centuries after its founding. The Fed's promise to more than double inflation will be a huge tailwind for bitcoin, stocks, gold, and hard assets as debt soars by many more trillions of dollars.

There has also been increasing institutional involvement from the largest cryptofund Grayscale along with roughly one thousand additional cryptofunds. Record high bitcoin futures volumes on the CME/Intercontinental Exchange Bakkt also help to fuel interest and will ultimately be bullish for blockchain-based companies. Major investors have been buying bitcoin including Paul Tudor Jones and Jim Simons, and it hit the news wire just an hour or so ago that Jack Dorsey's Square is following Microstrategy's move. Square bought $50 mil in bitcoin. So we are still just in the first inning of what is looking to fuel the paradigm shift that Ray Dalio has spoken of.

Finally, there have been observations by members on the Grayscale ETN ETHE that tracks the price of ethereum. It recently had an undercut & rally. ETHE is no longer much overvalued as its premium is at a low of 23.1%. Since being listed in June 2019, its premium has typically been above 50% and as high as over 800%. Typically, when its premium has fallen below 50% it tends to then start on rallies that overshoot to the upside once its rally gets underway. While ETHE has been in a steep downtrend and is volatile, one would have bought it closer to the low of its undercut & rally day to keep risk small.
Like what you read?
Let us help you make sense of these markets by signing up for our free Market Lab Reports:
This information is provided by MoKa Investors, LLC DBA Virtue of Selfish Investing (VoSI) is issued solely for informational purposes and does not constitute an offer to sell or a solicitation of an offer to buy securities. Information contained herein is based on sources which we believe to be reliable but is not guaranteed by us as being accurate and does not purport to be a complete statement or summary of available data. VoSI reports are intended to alert VoSI members to technical developments in certain securities that may or may not be actionable, only, and are not intended as recommendations. Past performance is not a guarantee, nor is it necessarily indicative, of future results. Opinions expressed herein are statements of our judgment as of the publication date and are subject to change without notice. Entities including but not limited to VoSI, its members, officers, directors, employees, customers, agents, and affiliates may have a position, long or short, in the securities referred to herein, and/or other related securities, and may increase or decrease such position or take a contra position. Additional information is available upon written request. This publication is for clients of Virtue of Selfish Investing. Reproduction without written permission is strictly prohibited and will be prosecuted to the full extent of the law. ©2023 MoKa Investors, LLC DBA Virtue of Selfish Investing. All rights reserved.
FOR OUR FREE MARKET LAB REPORT :