In a constructive move, China will cut tariffs on an annual $75 billion worth of U.S. imports in answer to the partial roll-back in U.S. tariffs on Chinese goods. Meanwhile, the coronavirus looks to be subsiding. The new European Central Bank President Christine Lagarde voiced concerns that the record low interest rates leaves the ECB with less fuel to provide economic stimulus. This is a change from her predecessor Mario Draghi who pushed for further easing despite concerns of diminished returns. In spite of Lagarde's remarks, German factory orders dropped a surprising -2.1% in December, leaving them down over 8% on the year. This suggests the manufacturing slump in the EU's largest economy still hasn't run its course.

Over in the world of bitcoin, while some analysts insist that they will wait until bitcoin drops back down below $6000 before buying, they may have an endless wait. Bitcoin under $6000 would correspond to the Grayscale Bitcoin ETN GBTC price well under its prior lows of 7.91. And yesterday's pocket pivot in GBTC underscores a potential resumption of the uptrend in bitcoin. 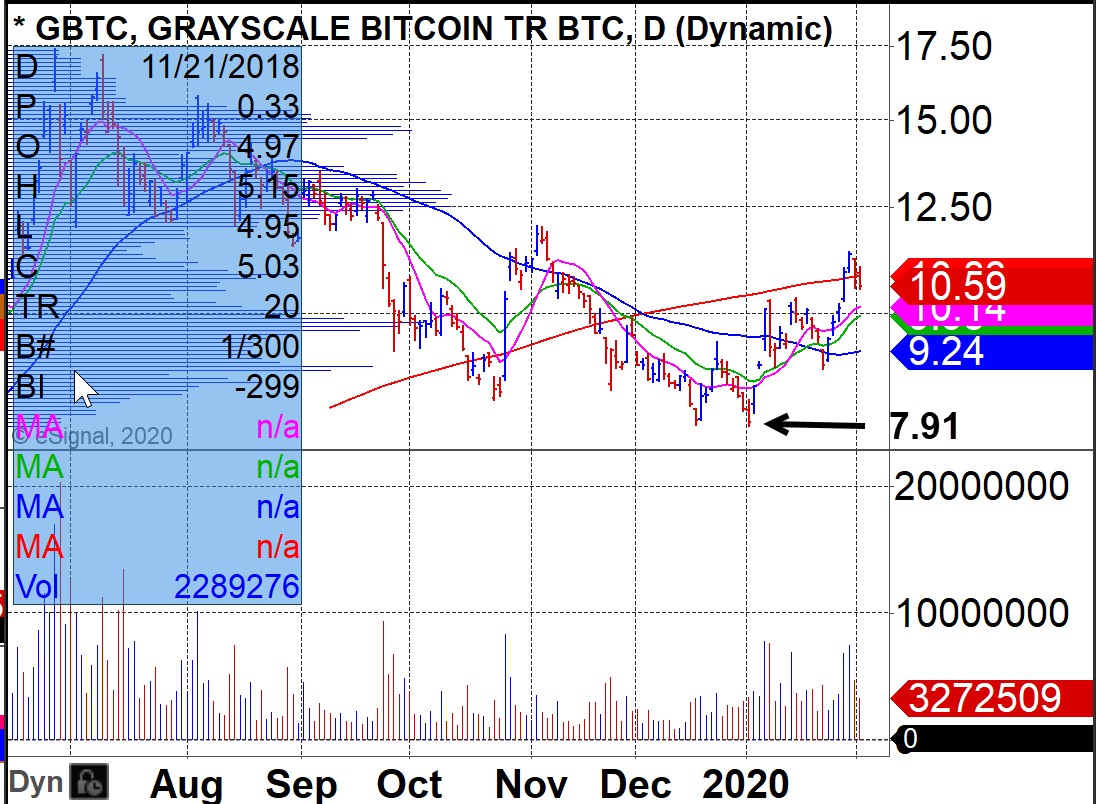 But this should come as no surprise. The May halving event should be bullish, before and after, if history is any guide. As we have mentioned since early 2019 when we went to a buy signal in bitcoin on March 18, the Grayscale bitcoin ETN GBTC is a highly liquid vehicle making it a simple way invest in bitcoin. Grayscale continues to report that more than 75% of its investment flow is from institutional funds, suggesting that institutions are no longer shy about investing in bitcoin.

The chart below illustrates how bitcoin starts into a major uptrend at least several months prior to a halving event. Its uptrend then accelerates some months after the halving event. The prior major low in bitcoin was set in Dec-2018. It has since been in a rough overall uptrend. 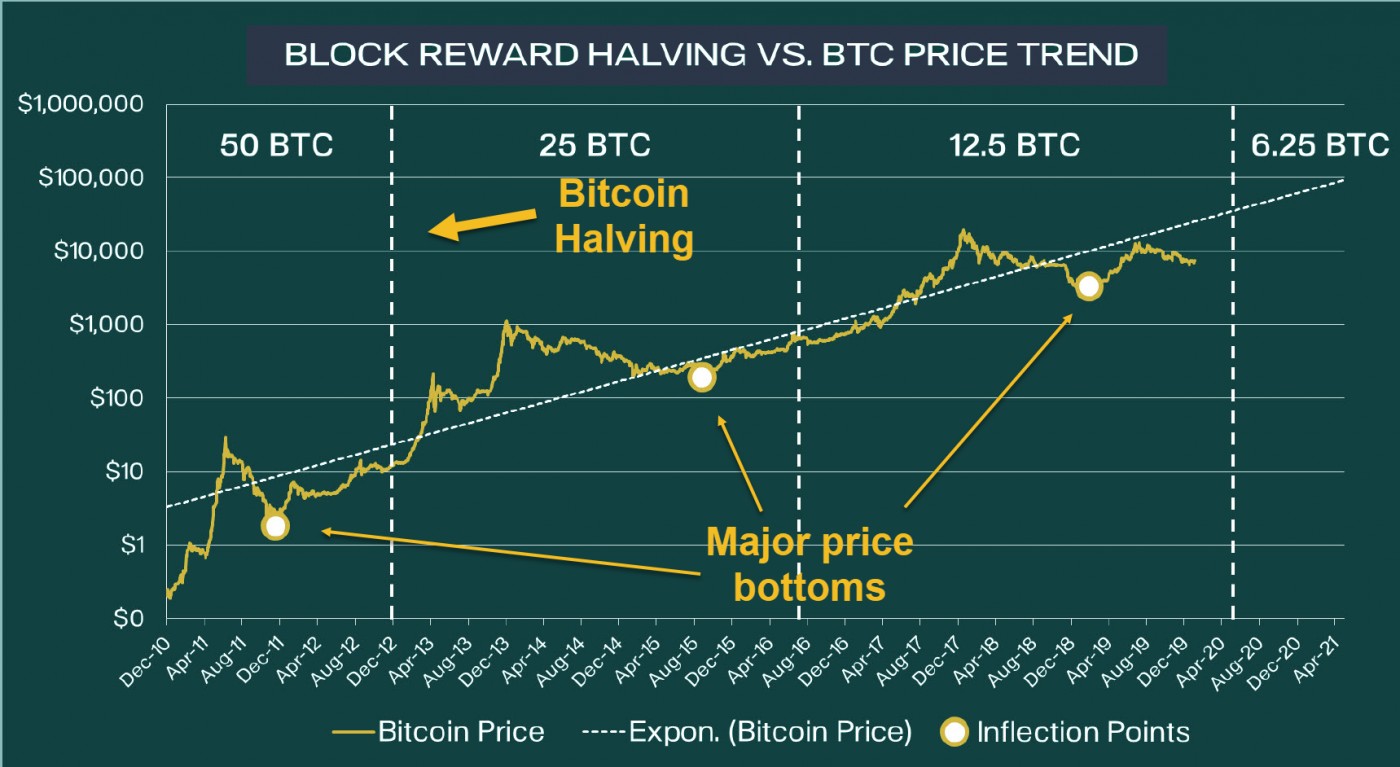 But the halving event is but one of several major tailwinds at hand as I have written about in prior reports.

Companies that provide peer-to-peer bitcoin exchange platforms have been undergoing exponential growth. One-third of the planet still does not have an account at a bank. Of those who do not have a bank account, more than two-thirds own mobile phones and most people have access to the internet through internet cafes or personal computers if not mobile phones. Such high levels of access to the internet facilities peer-to-peer finance.

As a consequence, companies such as Paxful that provide peer-to-peer marketplaces that connect bitcoin buyers with sellers are experiencing exponential rates of growth even during the bitcoin crypto bear market of 2018. The Paxful bitcoin exchange platform saw its transaction volume increase by 130% in 2018, driven largely by users in Africa.

Just as some Asian countries went straight to wireless phones, leapfrogging wired telephony, Africa is way ahead of the Western world in its adoption of p2p finance. When people say bitcoin has no value, they fail to see how the borderless transaction of value which bitcoin enables is the killer app. Platforms that provide fiat to bitcoin onramps such as Bitpesa that caters to third world countries such as Africa and coins.ph are also undergoing exponential growth. More than 1 in 10 Philippinos use coins.ph.

Bitcoin also rescues plummeting fiat in countries such as Venezuela and Argentina, nevermind the fact that major fiat currencies such as the U.S. dollar have lost most of their buying power over the last century, and the loss rate has accelerated as global central banks are at record levels of quantitative easing (QE) as I type. With fiat at $100 trillion and deflationary bitcoin at a tiny fraction of a trillion, bitcoin is just getting started.

Once bitcoin matures which is probably still at least a decade away, its price will stabilize to where its price fluctuations are even more stable than the dollar, the euro, or the pound. and it will become the lead store of value as it is the exact opposite of central banks, QE, and the inevitability of fiat devaluation as it cannot be inflated away.

More extreme forms of fiat devaluations have forced millions of families in countries such as Venezuela and Argentina to convert their respective home currency into bitcoin which they then convert into a more stable fiat currency such as the U.S. dollar. Massive sums from wealthy Chinese seeking to move money outside of China have used bitcoin to do so, converting yuan into bitcoin then into dollars or euros, bypassing the country's equivalent of $50,000 maximum allowed amount.

Furthermore, bitcoin collapses the massive fees of the remittance market. A typical worker sending money back to their relatives in third world countries costs the worker typically 1 1/2 months worth of work out of a year due to the exorbitant remittance fees. Bitcoin will eventually collapse the remittance market which is currently valued at well over $700 billion according to the World Bank.

As for those who argue that bitcoin is open source so can be easily forked into many types of bitcoins, it's like saying they will create another Twitter or Facebook since the software can be duplicated. Sure, no issue there, but then how do you attract the billions of users onto your platform? The network effect is key.

Now a number of people have spoken of the downsides of technology. It is always good to keep an eye on both sides of the coin. But fear mongering spurred on by mainstream media typically distorts the facts well beyond the reality. As one example, the number of people harmed by biotechnological research was just one boy who died in gene therapy trials about 12 years ago. In consequence, there were congressional hearings which quashed all gene therapy research for a number of years. 300,000 people died as a result of that delay. You cant name them as the records are sealed. Sadly, the balance of cost benefit is often deeply skewed in the name of exaggerated, alarmist fears.

The gene-editing technology known as CRISPR is a great opportunity. Hundreds of trials of CRISPR have been conducted to overcome disease. Companies such as CRISPR Therapeutics (CRSP) have sharp upside moves so while CRSP is currently in a downtrend, it recently bounced off its 200-dma, so keep an eye out for possible entry points.

Yes, CRISPR could be abused just as with all cutting edge technologies. But at a 50,000 foot view, technology is bringing us a better reality. The world is improving exponentially. This is the most peaceful time in human history though one can be led via mainstream media to believe otherwise. Information is at our fingertips. A century ago, there could be a battle that wiped out the next village and you wouldn't hear about it for months. Education and literacy has gone from 10% to 90% over the last 100 years while poverty has declined 95% in Asia, but if there's a black swan, an existential event, such an event could be a setback as the social and cultural implications run so deep that governments typically use such events as an excuse to pass numerous laws which are often rights crippling, giving yet more power to governments.

Ideas often produce exponential gains, not linear gains. 23 classical engineering problems were studied to see the gains in software vs hardware. The ratio was 1000:1. While hardware development doubled every year, software dev was beyond exponential through software algorithmic improvements. Innovations fueled further innovation which further fueled software dev. Everything is interconnected. As one example, more memory and CPU power fuels technologies such as deep learning which in turn fuels innovation.

This is why alt-currency stocks on the bleeding edge such as GOOGL, AMZN, FB, AAPL, and MSFT are at or near new all-time highs. Their general uptrends should persist given the exponential growth in cutting edge tech as well as continued monetary stimulus.