I have a soft spot in my heart for bottom-fishing buyable gap-ups, especially in former big-stock leaders that have broken down severely in steady, intermediate- to long-term declines. One such stock on my radar currently is Palo Alto Networks (PANW). PANW reported earnings Wednesday after the close and gapped furiously to the upside in after-hours trade.

On Thursday morning, the stock opened at 133.13, posted an intraday low at 133 even, and then took off to the upside, clearing the 200-day moving average. That was a typical bottom-fishing buyable gap-up (BFBGU) that was buyable near the open on Thursday once the 133 low was set. Alternatively, one could have waited until the stock cleared the 200-dma at 134.83 and then used that as a convenient reference for a selling guide.

PANW went on to close near the highs of the day on heavy buying volume, and on Friday very constructively held those gains as the daily price range narrowed and volume declined sharply, despite coming in at about twice average. This is in a buyable position, as I see it, using the 200-dma as a selling guide. Even better would be a little pullback closer to the line with volume drying up even more, assuming that even occurs. PANW has about 16-17 million shares sold short vs. a float of 84.7 million shares, so unless all the buying over the past two days has been nothing but shorts scrambling to cover their positions, this may have legs from here. 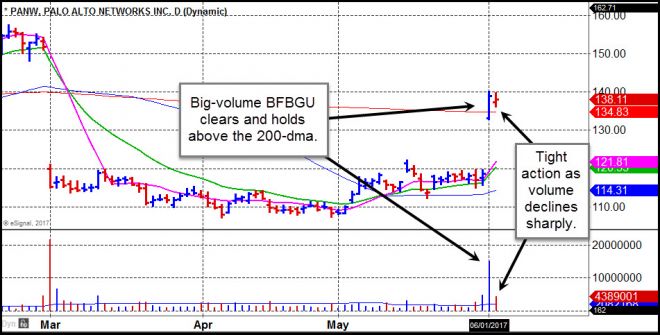 Crude oil hasn’t been able to catch a break lately as it just keeps moving lower. This is somewhat humorous since the continued decline in oil prices defies OPEC’s recent attempts to “fix” prices at higher levels by cutting production. But the U.S. frackers are a formidable force in keeping oil prices low given their ability to produce oil and natural gas at low costs. Eventually, I think the tenuous agreement between Saudi Arabia, Russia, and other oil producers involved in what is nothing more or less than an oil price-fixing “cartel” (what else would you call it?) will be tossed out the window.

As the price of oil continues to decline, so do the stock prices of oil-related names, including the fracking sand players I’ve discussed in recent VooDoo Reports, SND and SLCA. Interestingly, the action in fracking services provider Keane Group (FRAC) remains constructive. After posting a roundabout pocket pivot (RAPP) coming up through the 50-dma two weeks ago, the stock has consolidated and held above its 20-dema. On Friday, FRAC showed some minor support at the 20-dema. With so many other names acting well in this market, this one may still be one to keep an eye on as an “Ugly Duckling” type of situation that is still developing constructively, despite the continued decline in oil prices. 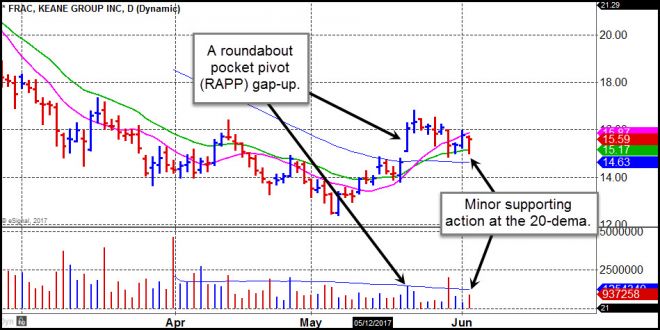 Back in late December of last year, I received several emails from our followers that included detailed “Precedence Analysis” pieces showing why hot-IPO (at least at that time) Acacia Communications (ACIA) was “just like” Cisco Systems (CSCO) in 1991-1992. Most of this just provided more evidence as to why I totally disregard such precedence analysis as bunk. It has no real predictive value, and one can simply operate on the basis of current price/volume action when it comes to handling a stock like ACIA in 2016 or even CSCO in 1991-1992.

The comparison did in fact turn out to be silly, since CSCO in 1991-1992 went on to move higher to the tune of some 10,000% or so, if my memory serves me correctly. ACIA, on the other hand, and despite looking “just like” the CSCO of 1991-1992, went on to decline over 60%. So much for “Precedence Analysis,” but I suppose it works well as something to pitch and sell investors on if you’re offering over-priced $15,000 weekend seminars.

Anyway, now that ACIA is widely-hated and disregarded (although I have yet to receive any class-action suit solicitations from ambulance-chasing securities lawyers seeking compensation for investors who got creamed in the stock), it may be starting to get interesting here as an “Ugly Duckling.”

Note the bottom-fishing pocket pivot on Wednesday of this past week. This also occurred after “bad” news on the same day the company announced a product defect, but merely resulted in a big-volume shakeout that turned into a pocket pivot once ACIA closed above the 10-dma. The stock held above the 10-dma for the rest of the week with Friday’s volume drying up to -61% below average.

The chart also shows three distinct oversold, gray, “Bingo” indicator bars, and I generally look for at least three distinct bars or groupings of bars in conjunction with a BFPP or RAPP as a possible turning point. ACIA also has high relative short interest, with 8.4 million shares short on a float of 19.3 million as of the last reported date on May 15th. This may be good for a trade at best, or maybe more. In any case, it looks buyable here using the 10-dma as a quick out point if it doesn’t work. 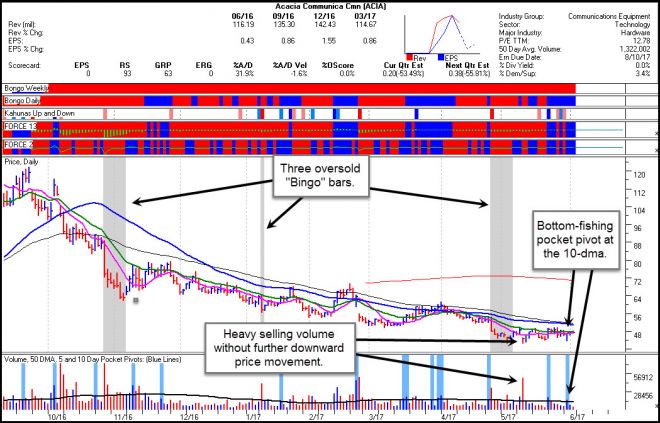