Offbeat Ideas from the Depths of Gil’s Trading Notes

Financials strike me as an interesting group here as they chop sideways in big consolidation-like formations. In some cases, they look like later-stage failed-base types of short-sale set-ups. But we must remember that this market is one that is dominated by what we like to call the “Ugly Duckling.”

Just when things look to be at maximum grimness for a particular stock, the Ugly Duckling shows up and sends the thing moving back to the upside. At the heart of this phenomenon on a granular level is the concept of “voodoo” volume dry-ups in a stock that has previously broken down, even becoming a decent short-sale target on a swing-trading basis.

Below we can see how JPM broke out back in mid-February, had a “breakaway” gap on the first day of March, and then went straight downhill from there. In fact, the stock provided some reasonable short-sale profits if one shorted the stock as it broke below the green 20-dema in mid-March. Over the past several weeks, however, an objective, two-sided evaluation of the pattern can also yield the conclusion that the stock is in fact just rounding out the lows of a new base. 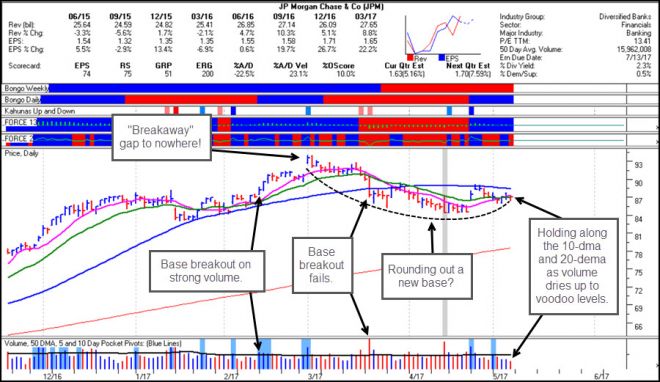 What makes financials interesting to me as the group bases is that they have a couple of potential drivers for upside movement and subsequent breakouts from their current consolidations. The first, is, of course, higher interest rates going forward. That seems to be the focus of most of the sentiment regarding the financials, and is also a good example of “crowd logic.” Financials go higher if rates go higher, and if rates go lower financials go lower.

But there is another driver that may be more important than the simple direction of interest rates going forward. That would be the potential for new banking industry regulation legislation that lifts many of the current rules (read: Dodd-Frank) that place additional burdens on the banks’ ability to do business. If you free the banks from those chains through legislative reform, then the group may be free to fly higher.

That is what led the group to launch higher after the November election. After a strong upside trend that perhaps became somewhat obvious by March of this year, they have all corrected. Whether these corrections lead to further downside, or whether they result in the rounding out of new bases is what we want to watch for very closely.

If we look at a close-up view of the stock’s “rounding out” action on the chart below, we can see that as the stock came down in April it undercut the prior March low in the pattern. Things looked pretty grim at the time, as the move to lower lows was accompanied by heavy selling volume (Note the gray oversold "Bingo" indicator bar that showed up right at the lows). But that is just when the Ugly Duckling showed up to trigger an undercut & rally move that then saw the stock hold its ground for a few days without further downside progress.

A week later the stock posted a small gap-up move on a five-day pocket pivot signature as it moved back above the 20-dema. That was followed by a move up to logical resistance at the 50-dma, and then a pullback and retest of the 20-dema. On Friday of this past week, JPM held tight at the 20-dema as volume dried up to -40.1% below average, which qualifies as a “voodoo” volume signature. 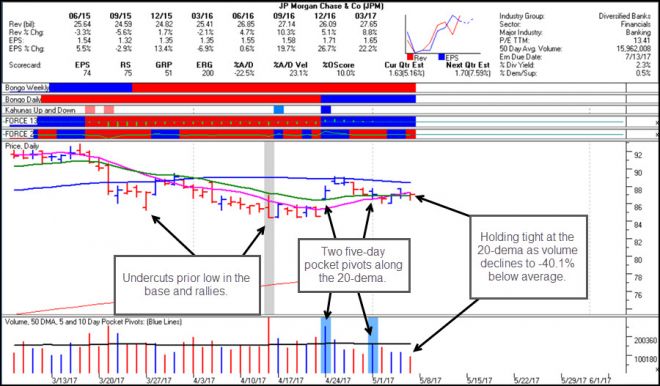 This could be a spot where the stock fakes out the bears and breaks back above the 50-dma. My approach in this situation would be to take a position here at the 20-dema, using it plus another 1-3% on the downside as a relatively tight selling guide.

Other charts that may have Ugly Duckling potential include VLY, ZION, HBHC, ASB, EWBC, KEY among smaller banks, while other big-stock names like BAC and C look to be in basing formations similar to JPM’s. GS and WFC might be more “Ugly Duckling-like,” as they are deeper in their patterns, but also should be watched closely. As your weekend homework assignment, check out the charts of each of these, and compare the action to JPM in terms of rounding-out action, voodoo volume signatures, and overall “Ugly Duckling” potential.

With Emmanuel Macron winning the French election today, this takes one roadblock out of the Fed’s perceived need to hold pat on interest rates, so could be seen as positive for financials tomorrow at the open. Happy trading.