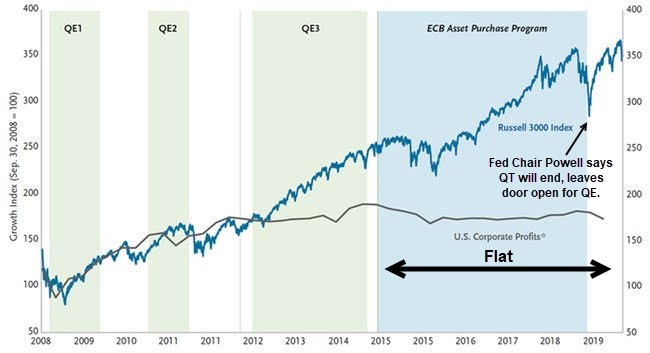 QE has kept this bull market alive. Global QE remained in full measure even after the U.S. Federal Reserve started to shrink their balance sheet due to programs such as the ECB asset purchase program. U.S. corporate profits have been flatlining since QE3 ended. Record levels of stock buybacks are due to increasing amounts of QE capital that continues to find its way into U.S. stocks.

President Donald Trump is pressing the advantage the U.S. has over other countries in terms of knowing QE in all its forms finds its way into U.S. stocks and bonds first, thus enriching the U.S. relative to other countries. Trump therefore continues to play hard ball with other countries. Trump most recently revived the threat of a trade war with the European Union, threatening to levy tariffs on European auto exports if the EU fails to agree to a "new deal". He didn't go into specifics but said the size of the EU's surplus with the U.S. needs to be reduced. Trump told the new EU Commission President Ursula von der Leyen that he would "take action" in the form of "very high tariffs on their cars and other things" if a new deal was not reached.

While this Era of QE continues at full mast, the growth in exponential technologies across the board remain, well, exponential. That said, there has been much fear over the elimination of jobs due to various technologies including artificial intelligence. But one might ask how many jobs in the 1900s exist today? The worries the Luddites had in the 19th century after the automation of the textile industry in England was that in the future, employment would just be limited to the elite. Automation did eliminate jobs but, as has always been the case, more new jobs were created than lost. The Law of Accelerating Returns was put forth by Ray Kurzweil. It says the rate of progress in any evolutionary learning environment which includes deep and machine learning, which, put simply, is a system that learns via trial and error over time, increases exponentially. In other words, as a system evolves through iterative learning, the faster it evolves. Just as ideas beget ideas, evolution begets evolution.

In the 1900s, 38% worked on farms, 25% worked in factories, or two-thirds of the working force. By 2015, these statistics dropped to 2% on farms, 9% in factories. But since those jobs are created as needed, politicians and mainstream media capitalize on the present moment to stoke fears that automation will lead to lost jobs. Sure, truck drivers will no longer be needed due to the emergence of self-driving vehicles. The renowned angel investor and deep thinker Naval Ravikant said 90% of jobs on Wall Street will be gone in several years due to blockchain's ability to eliminate middle men via its trustless technology.

But fear not. In recent years, the increase in employment has been related to new ways of making money which weren't even contemplated a decade ago. Mobile apps, websites, social media, internet businesses, data analytics, coding, blockchain, and AI are all part of the boost in employment. That is not to say the unemployment figures are not being manipulated, but despite or rather due to the rapid, accelerating growth in various technologies, the 24 million jobs in 1900 have grown to 142 million jobs today and climbing despite all the new technologies that have been launched since then. New jobs pay 11 times as much in constant dollars, and they're sometimes more interesting. Back-breaking, labor intensive, 10+ hour a day jobs a century ago to put food on the table for one's family have largely been replaced in first world countries with more fulfilling jobs. Careers that give one the feeling of having more purpose, exploring one's passions, adding value through the cross section between what one is good at and where one adds value as we move up Maslow's heirarchy will gradually become more the norm.

We couldn't do these new jobs without enhancing our intelligence through education. We've gone from 38,000 college students in 1870 to 15 million today. We also have a growing number of students who are opting out of college and instead launching their own businesses in lieu of getting a four year degree. The internet, mobile apps, coding, and blockchain are a few platforms that enable this trend. We are doing things today we couldn't even have imagined 20 years ago.

As a consequence, corporate structure will diminish as each person eventually becomes their own brand. The internet enabled this in the earlier days for the few enterprising souls, but is increasingly becoming the standard for a growing number of people. Mass adoption of such paradigms is on the horizon. Corporations will continue to co-exist but will become far more lean and efficient. As one example, corporate meetings held in virtual reality will eliminate the need for board rooms. Working from home will reduce the need for office space and will save on the bottom line. Close personal contact from remote via virtual reality will feel just as real as being there in person as bandwidth increases. We will eventually appear anywhere in seemingly physical form even though it is our avatar, a digital projection of ourselves, that is on location. I used to say in the 1990s that Thankgiving dinner would eventually include various family members sitting at the table in various parts of the planet. Technologies that project smells and tastes from a distance are in the works. The feel of touch from a distance has already been successfully tested. A person in the New York City threw a footfall to a person in London via virtual reality. An AI computer was able to simulate the feel, texture, and weight of the football so the person in London felt like they were in the same room throwing a football to each other.

The upshot is to focus on those companies capitalizing on this changing paradigm driven by technologies undergoing exponential growth. The FAANG stocks are certainly part of this trend. Facebook, Apple, Amazon, Netflix, and Google are all marshaling their resources to maintain pole position in their various areas of specialty. Such areas include artificial intelligence, big data, robotics, self-driving cars and trucks, deep learning via neural nets, networks and computing systems, blockchain, and virtual and augmented reality, among others. If you look at the weekly charts of these leading names, some are close to or at new highs. AMZN is close to new highs. FB, GOOGL, and AAPL are setting new highs while in uptrends. NFLX despite its issues in maintaining its pole position and reducing its debt is still within 20% of its all-time highs. MSFT has trending higher over the last several years as it too is a worthy contender to the FAANG names. Of course, we should also mention TSLA as Elon Musk has his hands in many moonshot jars. Automated cars, The Boring Project, reusable rockets, and neural laces are just the ice cube on the iceberg. Starting in late 2019, TSLA stock has embarked on a sharp uptrend as Musk is a master at marketing and government subsidies.

As I've said before, while technological progress has continued to accelerate since the 1900s, we're going into a new era of steeper exponential growth. Buckle up!