The VoSI Focus List is a compilation and reference list of stocks for which Pocket Pivot or Buyable Gap-Up Reports have been issued. It is not intended as a "buy list" or a list of recommendations. Stocks on the list may or may not be in proper buy positions, and investors should exercise discretion and proper judgement in determining when and where stocks on the Focus List can be purchased.

Names removed from the list this week: For reference purposes we show the entire Focus List above as of Monday morning. Based on the action seen throughout the week, the following names were removed: ACIA, EDU, GIMO, LUMI, MYOV, QCOM, TLND, TTD, and WB.

General Observations: The proverbial "Mac Truck" drove through the few names currently on the VoSI Focus List this past week. Several names, such as New Oriental Education & Technology (EDU), suddenly split wide open on Friday after allegations of fraud and an U.S. Standards Council investigations. Unfortunately, this is the type of event that can hit Chinese names in particular, given the lack of accounting standards among Chinese companies. Some signs that something was amiss began to show up early in the week as the stock began to slide below its 10-day and 20-day moving averages earlier in the week as selling volume picked up, but only slightly. The action in EDU underscores why we have always said sell stops (either actual or mental) are essential. Had one still held shares on Friday, a sell stop just below the 50-day moving average would have been hit before the stock melted down. EDU was trading between 48.38 and 49.08 during the first 40 minutes of trade. 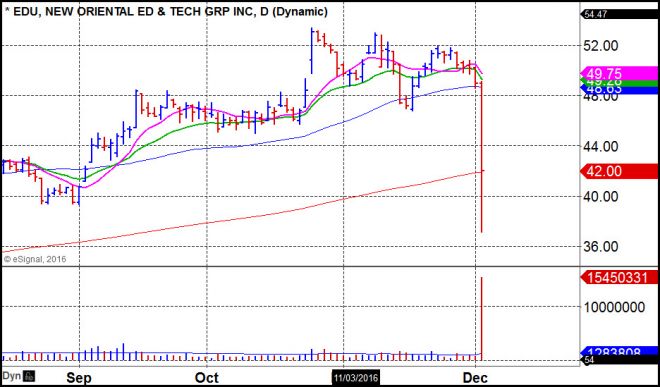 Nvidia (NVDA) and Airgain (AGX) might be considered to be in relatively better shape as the only two names left on the list, for now. While AGX is still holding above its recent breakout point, NVDA, which had become extremely extended following its buyable gap-up move of three weeks ago, was slammed back to its 20-day moving average on heavy selling volume on Thursday. 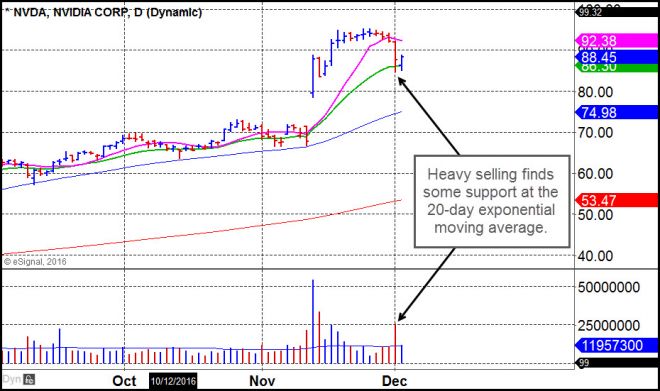 Some intraday support can be seen at the 20-day line as NVDA managed to close up and off of its intraday lows and the moving average. A high-volume breakdown through the 20-day line could bring the 50-day moving average down at 74.98 into play. Depending on how one is handling this, either the 20-day or 50-day lines can be used as maximum selling guides, based on one's personal risk-preferences.

Members should remain highly aware of the fact that severe breakdowns and failures in leading stocks can also present a silver lining as these names can easily transform into viable short-sale targets as they begin to show symptoms of Late-Stage Failed-Base (LSFB) short-sale set-ups.

For example, Qualcomm (QCOM) had posted a pocket pivot on Wednesday, but as we wrote at the time in our Pocket Pivot Report, there was some risk in buying into such a move based on the action of the general market. The risk became more obvious on Thursday as the stock busted its 50-day moving average on heavy selling volume. This move undercut prior lows in the pattern and came down to the highs of a previous base range. 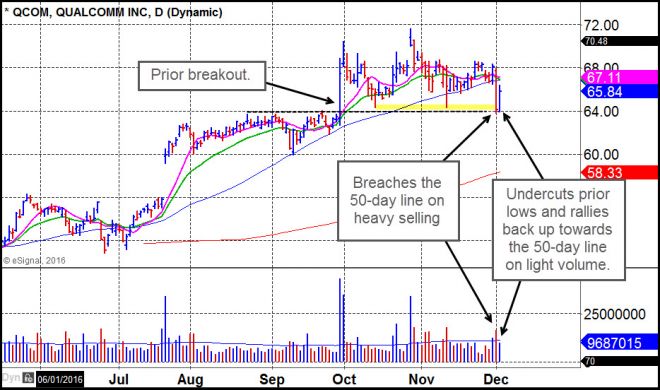 This led to a logical undercut & rally type of move off of the prior base highs on lighter volume. This move should be watched for potential "wedging" action up into the 50-day line where volume declines sharply as the approaches the 50-day line, making for a potential short sale set-up.

Another example is Gigamon (GIMO), which on the surface had been acting reasonably well as it continued to move higher and along its rising 10-day moving average. Notice, however, that the recent, initial move to all-time highs just above the 60 price level on November 21st occurred on light volume. The extremely light volume on November 25th on the second move above the 60 price level could be at least partially accounted for by the truncated post-Thanksgiving trading session that day. 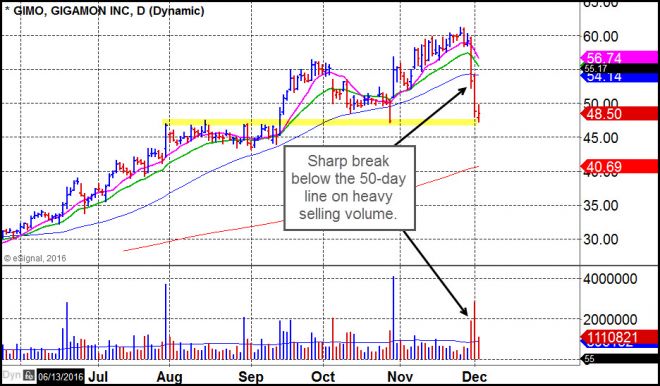 Weibo (WB) is another example of a current strong leading stock that is showing some signs of bearish schizophrenia. Last week the stock posted a very powerful pocket pivot move off of its 10-day moving average on a big-volume outside reversal to the upside following its earnings report. This sent the stock on a "roundabout" attempt as it regained the 50-day moving average and appeared to be well on its way to rounding out the lows of a potential new base. 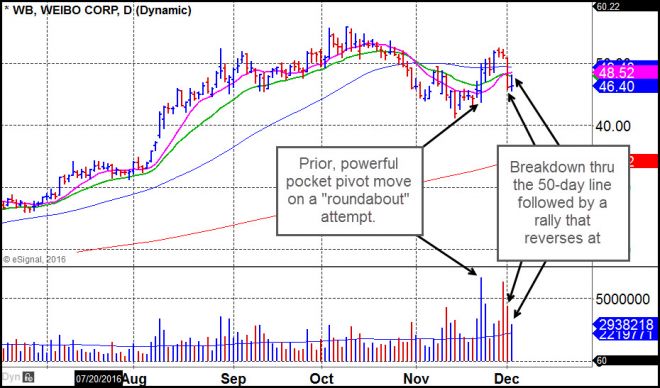 However, that follow-through to the prior week's pocket pivot was short-lived, and the stock broke sharply below the 50-day line on Thursday as selling volume came in very heavy. On Friday the stock briefly attempted to rally back up towards its 50-day line but only got as far as the 20-day line before reversing and closing near its intraday lows on heavy volume. Thus this would come into play as an LSFB short-sale set-up using the 20-day line as a guide for a reasonably tight upside stop.

As we discussed in our last book, "Short-Selling with the O'Neil Disciples," your best short ideas in a potential market correction or even bear market are often those same stocks that were the leaders on the way up. When these leaders start to break down after extended upside runs (something also evident in the chart patterns of QCOM, GIMO, and WB) they can easily become profitable short-sale targets.

With leading stocks coming under pressure, this would normally be considered an overall bearish sign for the general market. This, however, is an open question given the recent rotation in a number of stock sectors that are perceived to benefit from potential Trump Administration policies in the wake of the recent election results. At the time of the election results, these perceived "Trump beneficiaries" included bio-tech, healthcare, infrastructure, materials, coal, and defense names.

However, not all of these roads have necessarily led to Rome, so to speak. For example, while bio-techs were seen as primary beneficiaries of a Trump Administration given the hostile posture of a potential Clinton Administration, that initial post-election gap-up reaction has faded entirely. This is quite evident in the daily chart of the Vaneck Vectors BioTech ETF (BBH) below. 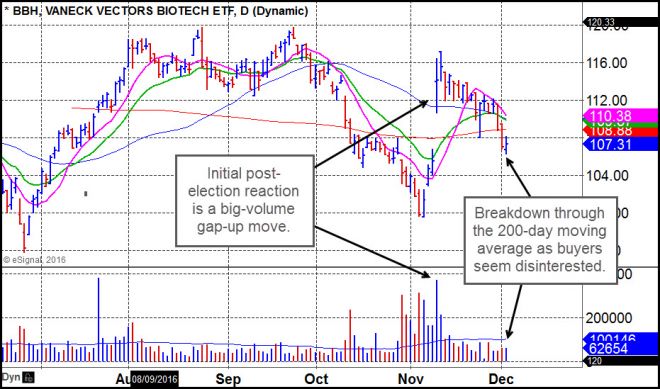 We can see that the BBH has drifted back below its 200-day moving average after little to no follow-through to the post-election high-volume gap-up move. Meanwhile big-stock bio-techs like Biogen Idec (BIIB) and Gilead Sciences (GILD), not shown here on charts, both look more like shorts than longs.

We saw the oil sector launch higher on Wednesday following the announcement of an OPEC production limits agreement. This sent just about every oil stock in the market gapping higher that day. The iShares U.S. Energy ETF (IYE) illustrates this ascending range breakout by the group on heavy buying volume. We will be monitoring this closely over the coming days to see whether this move holds up. OPEC is known for its sudden bouts of disharmony among its members and the associated fragility of any production agreements. 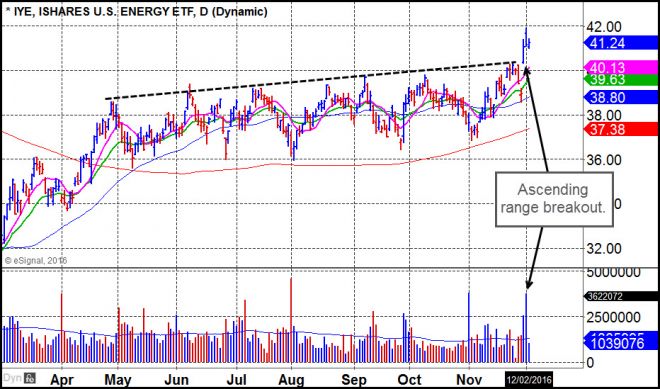 Overall, this market offers an odd, mixed-bag of situations that could be signaling a massive bullish rotation into under-owned areas of the market and a massive bearish rotation out of over-owned areas of the market. Overall this could create opportunities in either direction on the long or short side of specific names. For now, the bereft Focus List is prima facie evidence of the breakdown we've seen recently in former leaders. As the situation clarifies, the list could begin to sync up with the action in those sectors that have seen positive money flows over the past few days and weeks. In this regard we expect to be issuing more reports as the current two-sided market situation evolves.

Futures are off roughly half a percent on the Italian referendum matter. Italian voters are expected to reject constitutional reforms in a referendum as the first exit polls Sunday are showing a “no” vote ahead.  Concerns are that a “no” vote could spark a political crisis and a selloff in Italy’s stock market. Such a vote could prompt a resignation from Prime Minister Matteo Renzi, but analysts say this would not be the beginning of the failure of the euro or of the EU as they argue that Europe has faced far more problematic and challenging situations.