The VoSI Focus List is a compilation and reference list of stocks for which Pocket Pivot or Buyable Gap-Up Reports have been issued. It is not intended as a "buy list" or a list of recommendations. Stocks on the list may or may not be in proper buy positions, and investors should exercise discretion and proper judgement in determining when and where stocks on the Focus List can be purchased. The following notes are intended to assist in this process.

We again removed Qualcomm (QCOM) from the Focus List, as it again broke below its 50-day moving average on heavy volume. A close below Friday's intraday low would constitute a clean 50-day moving average violation. So far, the inconsistent, whipsaw action in QCOM as it expresses schizophrenic tendencies has served to make us look rather silly with this name. Such is life in the stock market.

Chinese name JD.com (JD) is on "removal watch" as it dropped below its 50-day moving average towards the end of the week. Chinese stocks in general, such as WB, MOMO, BIDU, BABA, EDU, CTRP, and NTES, among others, have been getting progressively weaker, and many of these names look like they are headed for lower lows. Whether JD can buck this trend remains to be seen, but unless the stock can quickly regain its 50-day moving average and find support here along the late November/early December lows it will be removed.

We saw some pocket pivots in existing Focus List names this past week. Arista Networks (ANET) posted its second pocket pivot in eight trading days on Wednesday, but in both cases the stock has not followed-through with any upside. Note that the first pocket pivot in early December led to a sharp three-day price decline that carried below the 20-day exponential moving average (green line on the chart) on an intraday basis before the stock found support and was able to close back above the 20-day line by the close.

That has the look of supporting action at the 20-day line, and you will note that the stock also undercut the prior early-December lows on that move, creating an "undercut & rally" move that resulted in this past Wednesday's pocket pivot. That pocket pivot has led to two days of small declines as volume also subsides. This is a volatile name and is best bought on weakness, although the stock may not look all that healthy at the time, as was the case on the intraday breach of the 20-day moving average five days ago on the chart below. At least two of the recent days the stock has been higher have been on strong volume as it struggles to launch into a new uptrend. 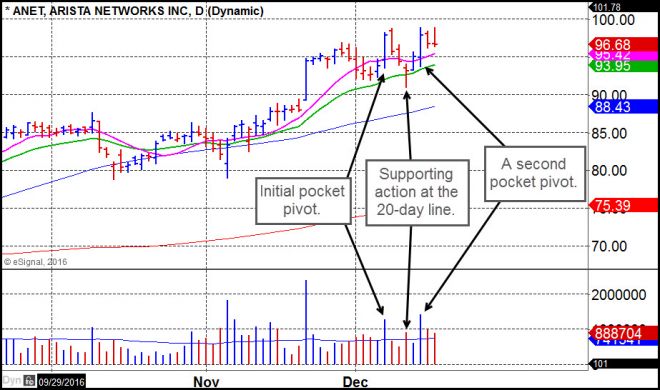 Zillow Group (Z) posted a pocket pivot back in early December, which we initially reported on at that time. That big-volume upside move carried up through the 50-day, 20-day, and 10-day moving averages. Because of the magnitude of that price move, the stock then spent the next six days consolidating those gains as it held on a pullback and test of the 10-day and 20-day moving averages 3, 4, and 5 trading days ago.

Note the "voodoo" action near the 10-day line as volume dried up in the extreme just before the stock turned back to the upside and posted its second pocket pivot on Thursday. This is another volatile name that is best bought on constructive weakness, as we saw earlier in the week on the voodoo pullback. 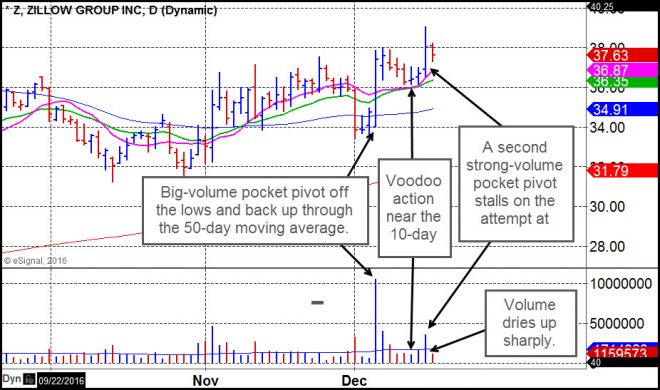 Nvidia (NVDA) has cleared the $100 "Century Mark," closing at 110.41 on Friday. After-hours the stock slipped back below the 100 price level. Technically, if the stock can clear and hold the $100 level than Jesse Livermore's "Century Mark" buy rule would kick-in, whereby he would look for the stock to quickly move thru a such a price level (the term "Century Mark" would also refer to the 200, 300, 400, etc. price levels and also applies to major indices such as the Dow Industrials which has been attempting a run through 20,000). In this case the stock could be bought on the move above 100 while also using the 100 price level, plus 2-3% of porosity, as a tight selling guide.

Conversely, if NVDA were unable to hold the 100 price level, and reversed back down through that point on heavy selling volume, Livermore's Century Mark Rule in Reverse would kick in, setting the stock up as a potential short-sale play. Livermore described his "Century Mark Rule" in the book, Reminiscences of a Stock Operator, as follows:

“The first thing I saw on the quotation board was that Anaconda was on the point of crossing 300. It had been up by leaps and bounds and there was apparently an aggressive bull party in it. It was an old trading theory of mine that when a stock crosses 100 or 200 or 300 for the first time the price does not stop at the even figure but goes a good deal higher, so that if you buy it as soon as it crosses the line it is almost certain to show you a profit. Timid people don’t like to buy a stock at a new high record.

I figured that when it crossed 300 it ought to keep going and probably touch 340 in a jiffy…I was bearish, remember, but I was also a tape-reading trader. I knew Anaconda, if it went the way I figured, would move very quickly. Whatever moves fast always appeals to me. I have learned patience and how to sit tight, but my personal preference is for fleet movements, and Anaconda was certainly not a sluggard. My buying it because it crossed 300 was prompted by the desire, always strong in me, of confirming my observations.

The next day the wires were working and we got the quotations as usual. Anaconda opened at 298 and went up to 302¾, but pretty soon it began to fade away. Also, the rest of the market was not acting right for a further rally. I made up my mind that if Anaconda went to 301 I must consider the whole thing to be a fake movement. On a legitimate advance the price should have gone to 310 without stopping.”

Livermore then went on to make a killing shorting Anaconda Copper at that point, which also coincided with a major market top in 1907. So might consider that if NVDA fails to hold the $100 price level and begins to reverse at that point, it may coincide with a market top or correction. Something to keep an eye on with NVDA as we move into year-end.

Argan (AGX) is pulling down to its 10-day moving average and closed just below the line Friday on heavy volume. We'd like to see volume dry up here as the stock holds along the 10-day line.

Mosaic (MOS) is pulling down towards its 20-day moving average, which brings it nearer to a lower-risk entry position.

Square (SQ) is holding up well and making higher highs following the mini-buyable-gap-up move it had the week before. Watch for pullbacks to the 10-day moving average in SQ as potentially lower-risk entry opportunities.

SunCoke Energy (SXC) has pulled right back into its 20-day moving average. The stock needs to hold these levels, as a break below the 20-day line would likely negate the prior pocket pivots on 12/5 and 12/6.

Trade Desk (TTD) is holding tight as it works on what may be the right side of its first real base since coming public. Low-volume pullbacks into the 10-day moving average would offer lower-risk entry opportunities. Keep in mind that TTD is a slightly thinner name that trades only 412,792 shares a day on average, so can be subject to volatility based on the coincident general market action.