Friday was without question the worst day of 2017 for the Focus List as a group, as sudden, heavy, and persistent selling hit the list like a lightning bolt out of the blue. Early in the day leading stocks, including most if not all Focus List names, were pushing higher in what has become their typical relentless style. But that changed late in the third hour of trade as the NASDAQ Composite began to sell off while the S&P 500, Dow Jones Industrials, and even the small-cap Russell 2000 Indexes were all moving higher.

Hopes of impending House legislation rolling back Dodd-Frank lit the financials on fire as they all moved higher, accounting for the divergence in the S&P 500 as well as the Russell 2000, which is comprised of a large contingent of small financials. Whether this is indicative of a mass rotation into financials is not clear, but we find the divergent manner in which leaders reversed and then sold off hard on Friday to be somewhat odd, if not bearish.

Those holding positions in any of the names that were hit with heavy selling volume on Friday should simply abide by their absolute and trailing stops. In a number of cases, we note that Focus List stocks did trigger our own selling guides for these names on Friday. That naturally pushes us more towards cash if not entirely into cash. If nothing else, the dramatic, sudden, and stark change of character in leading names is a warning shot across the market's bow, and we shall see how this figures into the coming trading week.

The Market Direction Model (MDM) remains on a buy signal for now. The VIX Volatility Model (VVM) went to a cash/neutral signal on Friday.

Snap (SNAP) broke support at the 20-dema on Monday, which was our prescribed selling guide. The stock continued lower all week as it reported a series of weak subscriber numbers. It was perhaps an early harbinger of the coming carnage in tech-related names on Friday.

Applied Optoelectronics (AAOI) broke -11.53% to the downside, moving sharply below its 20-dema which was our maximum selling guide for the stock.

Amazon.com (AMZN) experienced a “Flash Crash” just before the final hour of trading as it fell from around 962 to 927 in a matter of seconds, but recovered to be down -3.16% on heavy selling volume. It also failed at the $1,000 “Millennium Mark” and closed below its 10-dma and 20-dema.

Arista Networks (ANET) sold off on above-average volume and closed below its 10-dma but held support at the 20-dema.

Alibaba (BABA) posted a buyable gap-up on Thursday, but reversed on Friday after making new intraday highs. It remains above the 135.21 intraday low of Thursday’s BGU.

Box (BOX) broke below its 20-dema on heavy selling volume.

Baozun (BZUN) broke down hard Friday on heavy selling volume, but managed to close above its 10-dma after bouncing off the 50-dma earlier in the day. The stock had posted a new all-time high on Thursday before falling out of bed the next day in a breakout failure type of move. 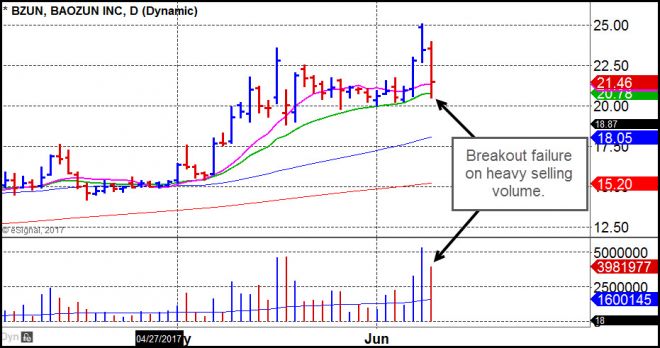 The Chemours Company (CC) reversed at its 10-dma and 20-dema on Friday but closed just above its 50-dma on heavy selling volume.

Coherent (COHR) pulled an outside reversal to the downside after posting all-time highs earlier in the day. It did hold support at the 20-dema, however, by the close.

Facebook (FB), which was heading for all-time highs early in the day Friday pulled a huge outside reversal and break to the downside as it crashed through both is 10-dma and 20-dema. It found support at the 50-dma, however, and closed about 1/3rd of the way up from its lows, but still quite weakly.

JD.com (JD) had gapped up on Thursday in sympathy to BABA, but reversed that day to close near its lows of the day on heavy volume. After opening slightly to the upside on Friday it reversed and broke cleanly below its 10-dma and 20-dema on very heavy selling volume.

Lumentum Holdings (LITE) was streaking to all-time highs Friday morning before pulling a very ugly and very big outside reversal to the downside on huge selling volume. It ended the day down -7.07% but held support at its 10-dma, surprisingly enough. 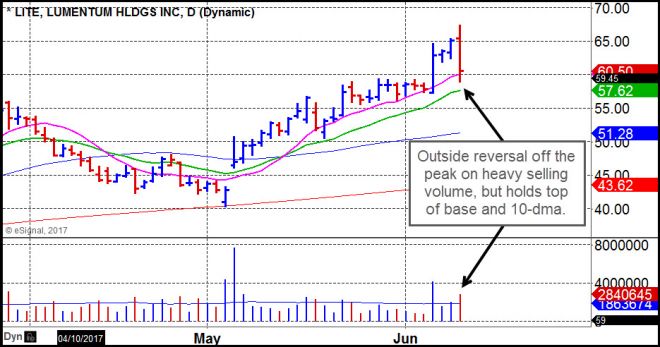 Momo (MOMO) broke below its 50-dma on heavy selling volume on Friday and ended the day down -6.38%.

Netflix (NFLX) went crashing below its 10-dma and 20-dema on heavy volume Friday, but found support at its 50-dma, closing well in the lower half of its daily trading range.

ServiceNow (NOW) pulled a big outside reversal after posting all-time highs early in the day on Friday on heavy selling volume. The stock broke back below its 10-dma but held closed just above its 20-dema while remaining well above the $100 Century Mark.

Nvidia (NVDA) was yet another big-stock NASDAQ leader posting an ugly outside reversal to the downside on Friday after gapping to all-time highs earlier in the day. Over the last two days of the week the stock benefited from three different analysts raising their price targets on the stock to between 180 and 185. One has to wonder where these analysts were when we put the stock on our list on May 10th at around 115 after it gapped up following a strong earnings report.

Square (SQ) had been steadily marching higher over the pat three weeks since decisively clearing the $20 price level and revealed a big change of character on Friday when it pulled a huge outside reversal to the downside on the heaviest volume in the pattern since its post-earnings gap-up of May 4th. The stock broke below its 10-dma but held its 20-dema.

Trivago (TRVG) was added to the list early Friday morning as it pushed higher within its pattern. This action came after a pocket pivot on Tuesday within the base and early Friday morning the stock looked headed for another pocket pivot, but was swept away by the tidal wave of selling and reversed to close down on the day but held support at its 20-dema.

Tesla (TSLA) pulled an outside reversal to the downside after posting new all-time highs early on Friday. By the close it traded the heaviest volume in its pattern since June 22, 2016. 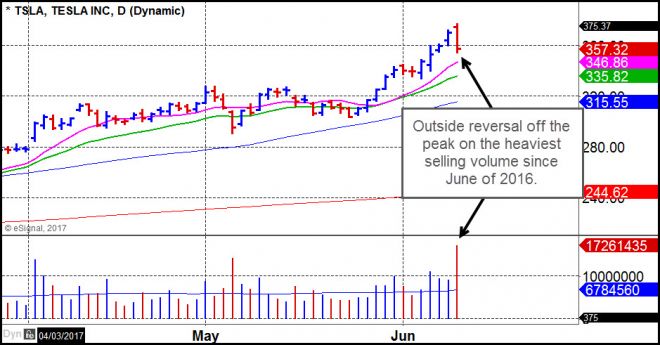 Trade Desk (TTD) was yet another outside reversal to the downside on Friday, breaking below both its 10-dma and 20-dema on heavy selling volume.

Wix.com (WIX) broke below its 50-dma on selling volume that was not particularly heavy but still 13% above-average. It was able to hold support along the lows of its current six-week base.