The VoSI Focus List is a compilation of stocks for which Pocket Pivot or Buyable Gap-Up Reports have been issued. It is not intended as a "buy list" or a list of recommendations. Stocks on the list may or may not be in proper buy positions, and investors should exercise discretion and proper judgement in determining when and where stocks on the Focus List can be purchased.

General Observations: Last weekend we noted that the removal of an increasing number of names from the Focus List is giving us "some idea as to the market's character 'under the hood.'" This has come to some fruition over the past week as the general market has sold off and currently appears to be a compromised and weak position from which further downside appears to be a reasonable probability.

Over the past week we have seen several stocks on the list actually "fall out of bed," such as MELI, for example, while other prior high-flyers like ACIA, PI, and TWLO continue to deteriorate. As we wrote last weekend, these names have had phenomenal upside moves, and the idea that they are entitled to continue rocketing higher is simply asking for too much in this environment. This is why we have advocated selling into extended strength and nailing down profits when one has them, seeking to re-enter at potentially lower-risk entry points.

However, when looking to buy on pullbacks the key word here is "constructive." One must also keep in mind where the stock has come from and how far it has gone. An example of this would be Alibaba (BABA), for which we first issued a Buyable Gap-Up (BGU) report on August 11 at 91.77. From there the stock rallied to a high of 109.76 as it broke out to higher highs on September 22nd. That breakout looked quite strong as volume surged and came in well above average, but the stock was up nearly 20% from its BGU by then. 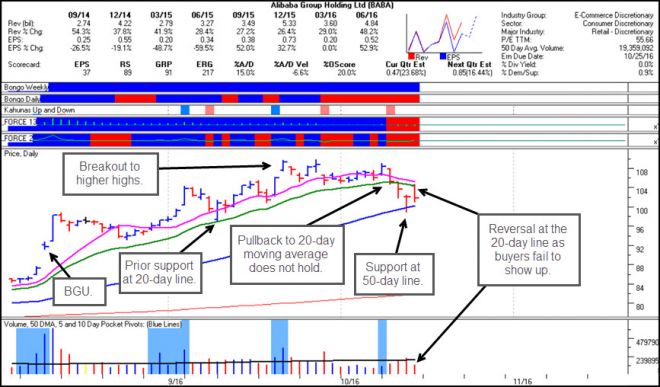 But as is often the case in this market, when something starts to become quite obvious on a breakout, as BABA did on September 22nd, that is the end of the line. The stock is unable to sustain any further upside momentum and begins to consolidate as the 20-day exponential moving average (green line) provides nearby support as it had previously on September 12th.

A change of character occurred on Wednesday of this past week, however, when the stock closed below its 20-day moving average for the first time since its August BGU. On Thursday the stock found support at the 50-day line, but then reversed at the 20-day line on Friday when buying volume failed to come in. Now the breach of the 20-day line following a prior breakout attempt that has now failed could bring BABA into play as a late-stage failed-base (LSFB) short-sale set-up. A breach of the 50-day line would seal the deal.

So while there are still 15 names left on the Focus List, some of these are sitting on the fence, so to speak, as they could easily start breaking down. Names to watch in this regard are AMZN, FB, and GIMO, for example. GIMO's chart most certainly shows a change of character as it sits on top of a prior base breakout and its 50-day moving average. Note also that GIMO has had an extended price move since June. A breach of the 50-day line and the prior base breakout point would confirm GIMO as a later-stage breakout failure. 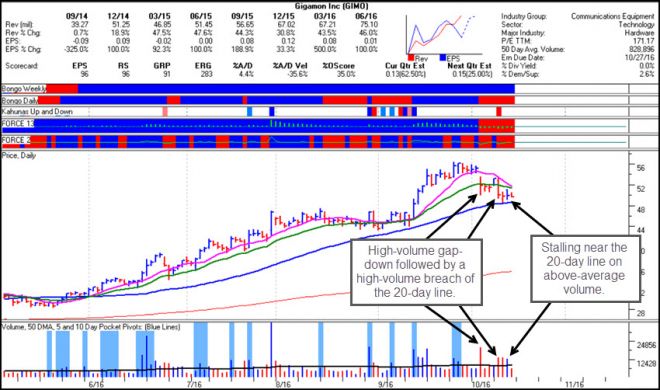 It would not surprise us to see more of these names break down, and members should also keep in mind that former leading stocks can offer short-sale opportunities as they start to fail on recent breakout attempts. This is the essence of the late-stage failed-base (LSFB) short-sale set-up, a common set-up that is seen at the start of market corrections. Also, when looking for potential short-sale target stocks, often the best ones will be leading stocks that have started to fail. In this manner, your best short-sale watch list suddenly becomes populated with the stocks that were previously on your buy watch list.