General Observations: As we see more names break down and get removed from the list, this gives us some idea as to the market's character "under the hood." This past week we also saw some downside price breaks in ALGN, EGRX, and GIMO, although for now these are staying on the list since ALGN has not yet violated its 50-day moving average and EGRX and GIMO are both pulling back to the top of prior base breakout points.

There are, however, still a number of names on the list acting reasonably well, and in cases where the price/volume action looks constructive and the stock has not already had a big upside price move, these might have a better chance at generating more significant upside IF money rotates in their direction as less obvious plays in the market.

In this regard, ACIA and TWLO can be considered to have become perhaps too obvious as they became extended from their recent IPO offerings. ACIA came public at $23 in May while TWLO came public in June at $16. The stocks have since gone up many times over, and in the process have become somewhat obvious. ACIA priced its $425 million secondary offering on Friday at an even $100, but the stock closed right at the level on heavy volume after trying to rally earlier in the day. The stock also closed just below its 50-day moving average for the first time in its short existence. This does not appear to indicate that the offering was "well received," so we shall see whether the stock can stabilize and regain its 50-day moving average. But at this point it is a bit obvious as a big market leader and may need more time to base.

Members should note that following ACIA's announcement of their secondary stock offering we sent out a report on September 26th warning of the following: "ACIA is a relatively new stock so it is not unusual to do a secondary offering. Indeed, TWLO may be next given its IPO performance." And in fact TWLO announced a $400 million secondary offering on Friday after the close. Call us prescient, or call us lucky, but when stocks go up 3-4 times or more from their IPO offering prices in just a handful of months, the temptation to tap the capital markets once again and unload shares on a secondary when prices are very favorable is irresistible.

In our view, recent buyers of ACIA and TWLO who only bought on extended strength rather than selling into it may not be happy with the secondary stock offerings. But given the price moves these stocks have had, we can only conclude that the officers of both companies are in fact smart, and that's why they made the decision to dump more shares when the getting is good, so to speak.

Notes on Precious Metals: SLW was removed from our Focus List though with SLV, GLD, and GDX (gold miners ETF) at support and looking downright ugly, SLW may recover.

GLD and SLV have both pulled down to their 200-day moving averages with the GLD closing just below the line over the past two trading days while SLV found volume support at the 200-day line on Friday. The SLV, like the GLD, is coming down into the upper area of a prior consolidation and base structure as it pulls down into the 200-day moving average: 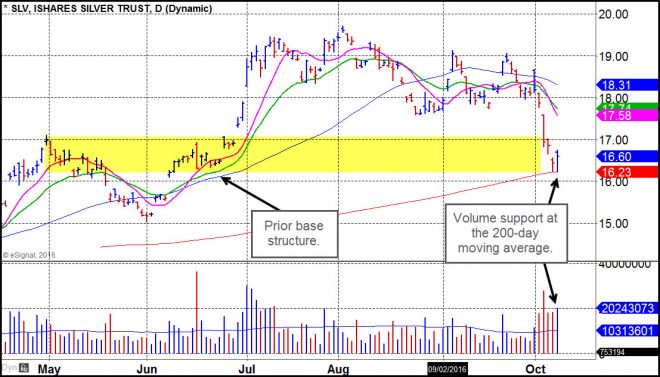 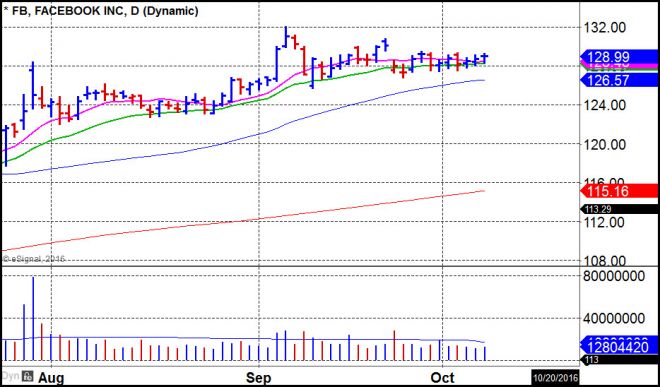 Constructive pullbacks to or tight action around the 20-day exponential moving average: EW, GKOS. GKOS found some volume support at its 20-day line on Friday: 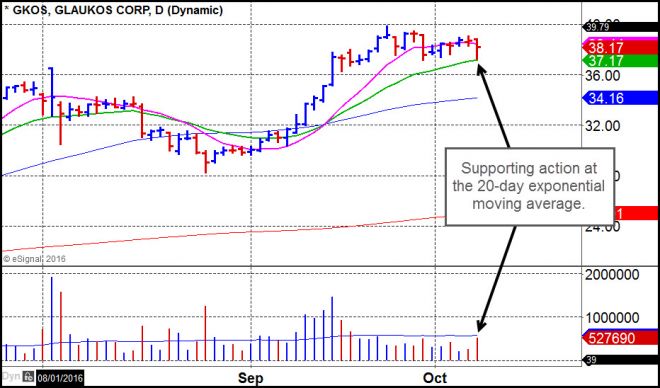 Constructive pullbacks to or tight action around the 50-day simple moving average: GRUB. GRUB is expected to announce earnings on October 25th, and profit-taking has brought it right back into the 50-day moving average as volume picked up on Friday for a little supporting action at the line: 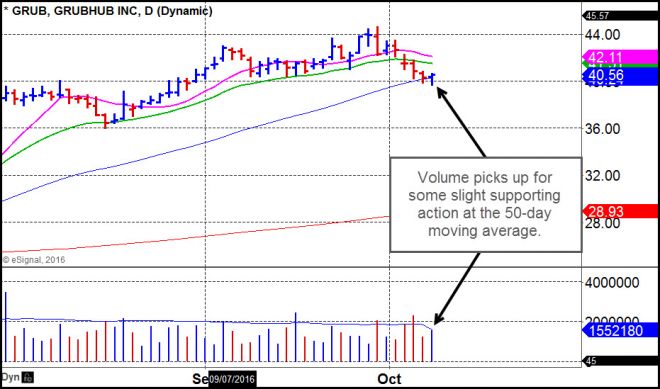