Trading Journal notes from Gil and Dr. K regarding this past week's Pocket Pivot and Buyable Gap-Up Reports: 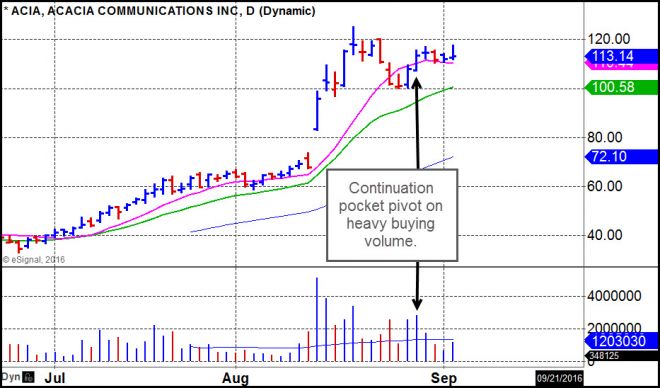 GM - ACIA posted a big-volume pocket pivot on Monday of this past week and is now sitting along the 10-day line which keeps it in a buyable position. However, if I chose to buy the stock here I would remain flexible by keeping a tight stop since there is still a chance of a pullback to the 20-day moving average at 100.58. If that were to happen you would be looking at a 10-13% pullback, so it would be best to avoid that by operating on the basis that if this current continuation pocket pivot is valid the stock should move up and off of the 10-day line from here.

Dr. K - Despite ACIA's intraday weakness on Monday, it managed a strong close which kept its pocket pivot alive. If you bought or plan to buy near the first line of support at its 10-day, I would keep a very tight stop around the 109/110 level which is about 3% away from Friday's closing price since it could easily pull back another 10% or more to its 20-day line which would be another potential entry point. 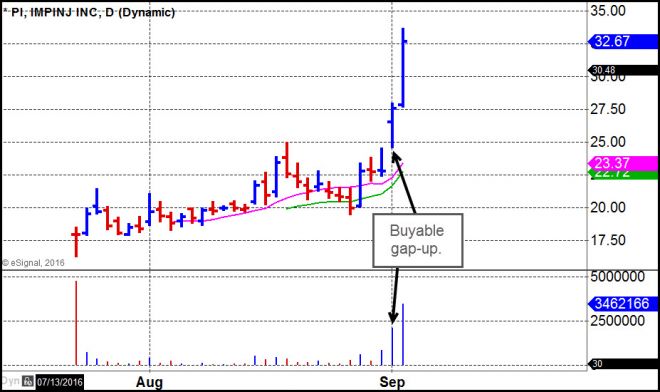 GM - A nice IPO rocket stock, PI kept going on Friday after Thursday's BGU. The total two-day gain adds up to +30.25%. If you're long this per our BGU report on Thursday morning, you are simply sitting tight awaiting the next potential add point.

Dr. K - We mentioned PI's 8-29 pocket pivot as one to buy on any weakness. On 8-30, PI pulled back to close to its 10-day line. It has since rocketed higher offering up another buy point on 9-1 when it had a buyable gap up. We reported on PI's BGU four minutes after the open. PI is a small cap IPO, subject to greater volatility, so one should look to take profits by keeping stops very tight here. Alternatively, one could trade around a core position by only taking partial profits should a tightly placed stop get hit. 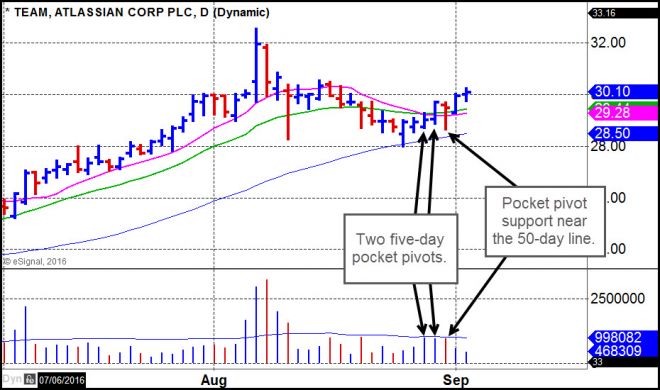 GM - If you look at a weekly chart of TEAM, which we don't show here, you will notice that it has come up a big cup-like formation all the way back to its post-IPO highs of late 2015. So it is logical that it ran into resistance on the breakout attempt in early August and then began to build what is now a four-week base. That base actually looks quite constructive and the stock can probably be bought here using the 10-day line at 29.28 as a selling guide. Pullbacks to the line would also offer lower-risk entry opportunities from here.

Dr. K - TEAM shot to new highs on its prior earnings report. It then pulled back on lower volume to its 50-day line where it got support. This was then followed by two 5-day pocket pivots with the second one up through its 10- and 20-day moving averages. Both are in close proximity so can be used as a price entry target or an undercutting of these lines could be used as a sell stop if one were to buy here. 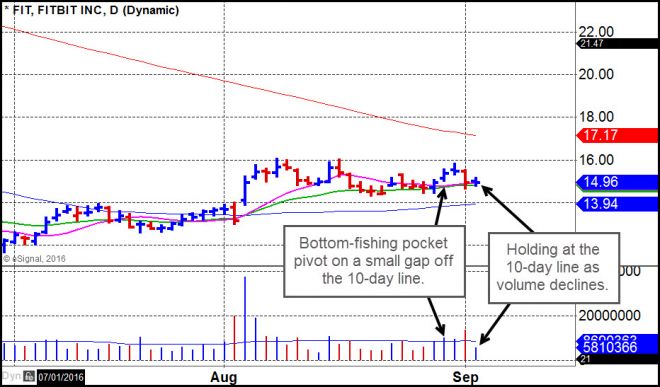 GM - FIT is a tricky little stock. The pocket pivot of this past Tuesday occurred as a small gap move up and off of the 10-day line within what is a two-month base-on-base formation that the stock has formed after bottoming in late June. The stock got hit with heavy selling on Thursday but held at the 10-day line on Friday as volume declined. This puts it in a lower-risk entry position along the 20-day line at 14.83. What is interesting to note about FIT is that in comparing the March 2016 to June 2016 mutual fund ownership numbers, the number of mutual funds owning the stock has jumped from 236 to an all-time high of 280. This is a bottom-fishing play which can take more time to develop.

Dr. K - Despite FIT carving out lower lows since its IPO, institutional sponsorship has grown since it went public five quarters ago. Certain bottom fishing pocket pivots can make nice gains up to resistance in a short time. Its first major point of resistance is its 200-day moving average almost 15% away from Friday's closing price. A tight stop could be placed just under its 20-day line around the 14.6 level. Alternatively, one could set a stop undercutting the 14.47 low set on 8-26 as the stock traced out its sideways base. 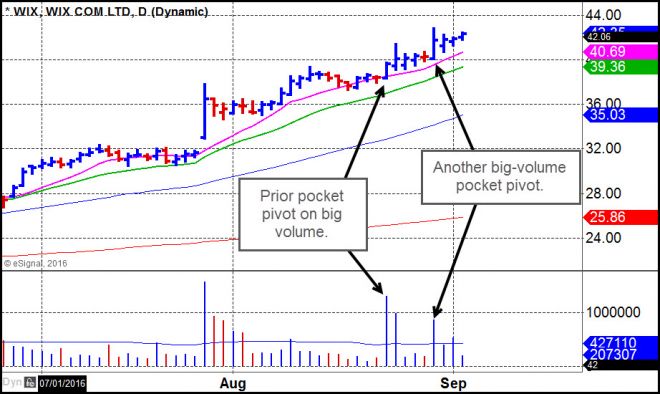 GM - WIX is currently extended and I would only view pullbacks to the 10-day line at 40.69 as lower-risk entry opportunities. 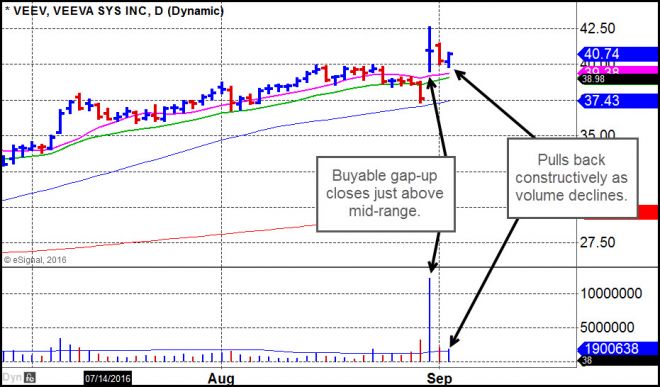 GM - VEEV is in a nice lower-risk buy position following Wednesday's buyable gap-up given that it is quite close to the BGU intraday low at 39.53 which can be utilized as a very tight selling guide.

Dr. K - A 2-3% undercut of the BGU day as your sell stop is reasonable as the stock would also have traded below both its 10- and 20-day moving averages which should serve as support. 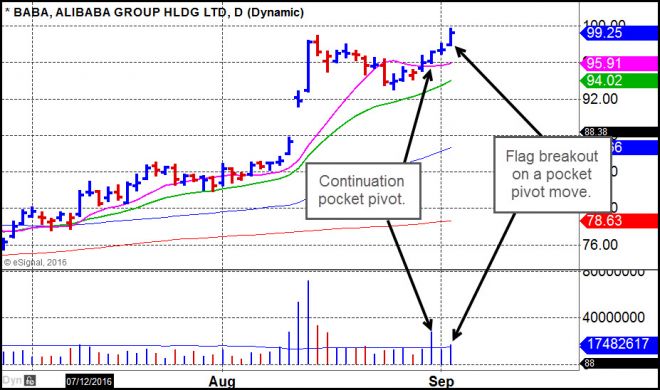 GM - BABA has continued higher following Wednesday's pocket pivot, which in turns comes after the buyable gap-up that we reported on in the early part of August. Notice that on Friday BABA posted another pocket pivot signature as it broke out of a three-week flag formation.

Dr. K - BABA continues to cruise higher but is currently extended so if you have not yet bought BABA, it could be bought closer to its 10- or 20-day moving averages. 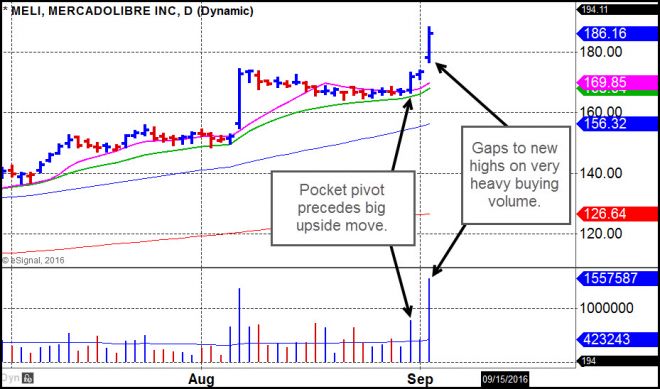 GM - MELI's pocket pivot on Wednesday was a precursor ahead of Thursday's big-volume gap-up move. Notice how the stock held tight on Thursday as volume declined following the pocket pivot, giving buyers a shot at taking a position ahead of Friday's big move.

Dr. K - If you missed MELI, never chase a stock. Keep it on your watch list and let it set up again, watching for constructive pullbacks to logical areas of support.