Market Lab Report - Weekend Review of Pocket Pivot and BGU Reports for the Week of June 6-10, 2016

As we know, markets can reverse on a dime. Friday's spike in volatility and notable strength in volatility ETFs such as VXX and UVXY together with Friday's distribution day and weakness across a number of stocks is a red flag. Stops should be extra tight as such one-day jumps in volatility often lead to a second and/or subsequent days in which volatility is elevated. The VIX Volatility Model may switch from its current SELL signal to a BUY signal, depending on what transpires early Monday.

Nervousness ahead of the June 23 BREXIT vote along with renewed fears regarding negative interest rates and deflationary fears out of China caused volatility to jump. Adding to the mounting worries was bond fund manager Bill Gross of Janus (ex-Pimco) who tweeted that global bond yields are the lowest in 500 years of recorded history, suggesting that this will not end well. That did not stop the ECB from fueling its QE program which pushed its 10-yr Bund yield down as low as 0.01%, a record low, while all shorter term German bonds have negative yields.

Trading Journal Notes from Gil and Dr. K regarding this past week's pocket pivot and buyable gap-up reports: 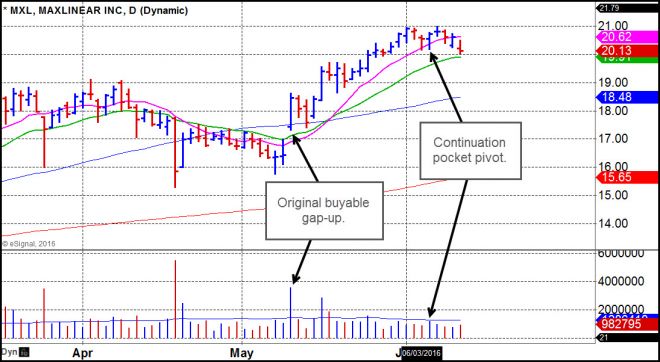 GM - As I see it MXL's continuation pocket pivot was just a good example of a move that you sell into and take profits. MXL was originally buyable on the low-volume pullback to the 50-day line following its early buyable gap-up move. That would have gotten you in around 17.50-18 a share, and the move to 21 represents a profit of at least 15%. In this market you take that, and look to perhaps re-enter on a pullback, depending on what the market does. Chasing this continuation pocket pivot up here is just plain silly, in my view. This pullback on Friday down to the 20-day moving average is coming on volume that is increasing, which is not the preferred type of declining volume dry-up I look for on pullbacks. I would not buy it, frankly, and would wait to see how things pan out and whether the stock can hold at the 20-day line.

Dr. K - For those who enjoy pyramiding their positions, this environment has been challenging to say the least as trends tend to be short-lived. Taking profits when you have them has been good strategy. Friday's action in the general market showed once again how markets can change on a dime. MXL found support at its 20-day moving average but on increasing volume. Any stop should be kept very tight if you still hold shares and placed just below the 20-day around 19.8. 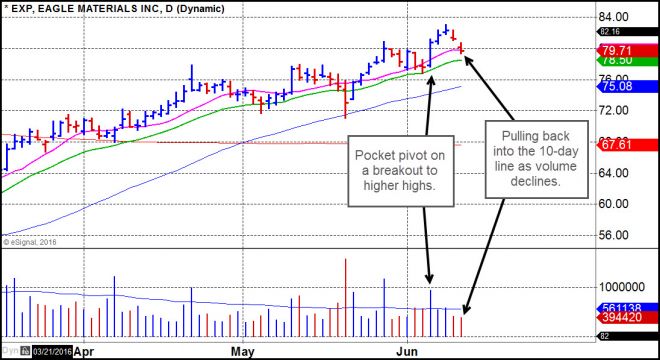 GM - EXP is pulling back in somewhat more orderly fashion after Wednesday's pocket pivot, and again illustrates why you do not chase strength in this market, even on a pocket pivot. The pullback over the past two days is coming on declining and lighter volume, which is more of what you would want to see. Certainly, if I were to look at buying the stock here on the pullback just below the 10-day line, the 20-day moving average would have to serve as my guide for a very tight downside stop.

Dr. K - This is a commodity-type play as its uptrend has been nearly lock step with commodities overall. Fears of the implication of negative interest rates, the upcoming BREXIT vote, and the problematic global economy pushed commodities lower on Friday. That said, they still remain in an uptrend. Still, Friday's selloff may only be midway as market pullbacks are often short and sharp, so tight stops are always in order. 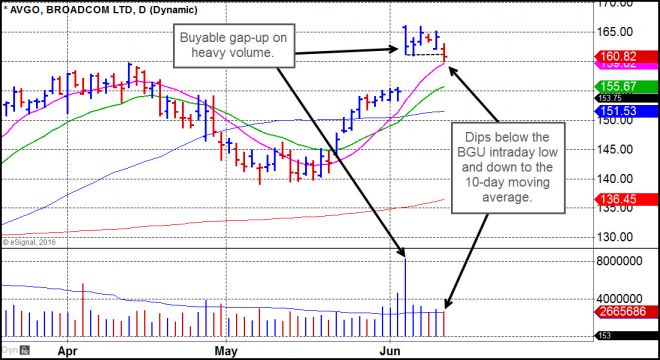 GM - AVGO is wobbling a bit following last week's buyable gap-up which was also a breakout from a cup-shaped base. The dip below the intraday low of the buyable gap-up day is probably within normal range, but the stock needs to hold the 10-day line and the the top of the prior base to remain viable. Otherwise, this could easily morph into some sort of late-stage failed-base short-sale set-up, particularly if the general market starts to get into more trouble this coming week. 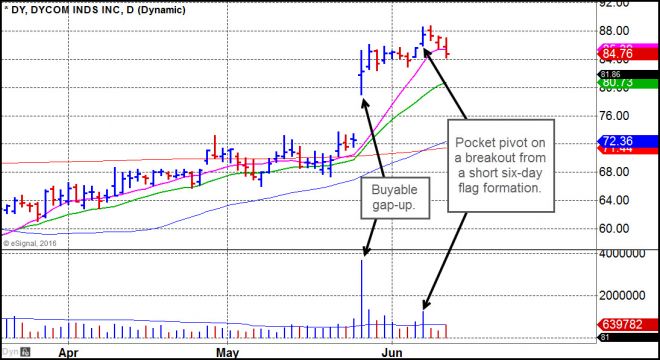 GM - Another example of a show of extended strength that is probably best sold into. DY had already had a buyable gap-up in late May and is already well-extended in a rally that has been going on since the market lows of February. Now the stock is breaking below the 10-day moving average as selling volume picks up to just about average.

Dr. K - Stops should be kept tighter than normal on all stocks given Friday's market action. Should DY trade below the low of Friday, it would have violated its 10-day moving average thus should be sold. 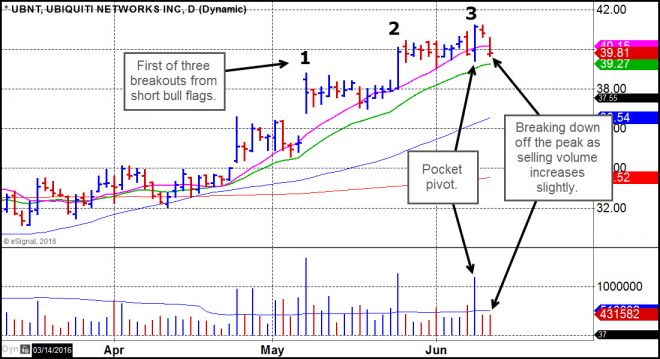 GM - UBNT posted a pocket pivot on its third breakout from a short bull flag formation in the past month. At this point the Rule of Three might clue us in that this is getting a bit obvious, so I am not surprised that this third breakout has summarily failed. Personally, had I bought the stock much lower where it should have been bought, I would simply sell into this pocket pivot and bag my profit. In my view UBNT needs to base more in order to consolidate the prior gain from the original breakout from a longer base back in late April.

Dr. K - Another 10-day violation is near. Since the stock closed below its 10-day moving average, if it trades below the low it set on Friday, it should be sold. The gap higher on its recent earnings report can lead to nice uptrends as gaps higher out of lengthy bases such as this one can put the stock on a nice upward trajectory. That said, general market weakness can just as easily cause a stock that is outpacing the market to quickly reverse course. 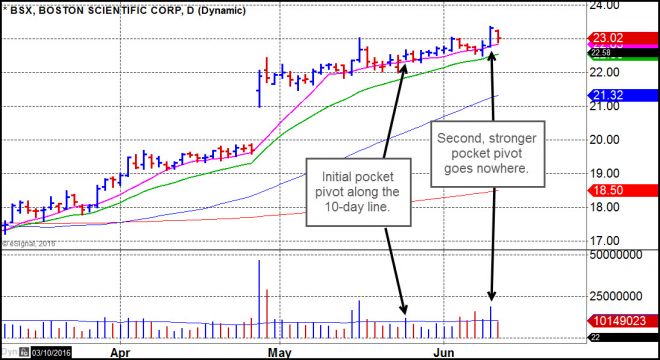 GM - BSX is a widely-owned medical device company known best for its stent business. It has posted a couple of pocket pivots along the 10-day line as it plods higher, and is best bought on the pullbacks to the 10-day or 20-day moving average. This pullback to the 10-day line on Friday is coming on lighter volume, so could be buyable, but my preference would have been to buy into Wednesday's pullback to the 20-day line, which is the lowest-risk position in the pattern as I see it. In general, I think that one should NEVER chase strength in any stock, and instead look to enter on pullbacks. In addition, I tend to think that displays of strength after a strong upside move are best sold into. Finally, I note that a number of names for which we've sent out Pocket Pivot and BGU Reports over the past 2-3 months are starting to show signs of wobbling, which may be an issue for the general market. Therefore, I advise caution, and if one decides to test the long side of anything, then implementation of the tightest stop possible is of paramount importance!

Dr. K - BSX managed to buck market weakness through mid-May when the general averages completed their mild correction then began their uptrends. Since then, BSX has baby-stepped higher, not the most impressive price action, though that flaw was countered by its earlier strength in addition to its gap higher on earnings. Nevertheless, Friday's market action was unsettling (see introduction at the start of this email) thus all stops should be kept extra tight since markets can reverse sharply lower, and at present, our stocks are waving cautionary flags.