Below are notes from the Trading Diaries of Dr. K and Gil on this past week's Pocket Pivot and Buyable Gap-Up Reports: 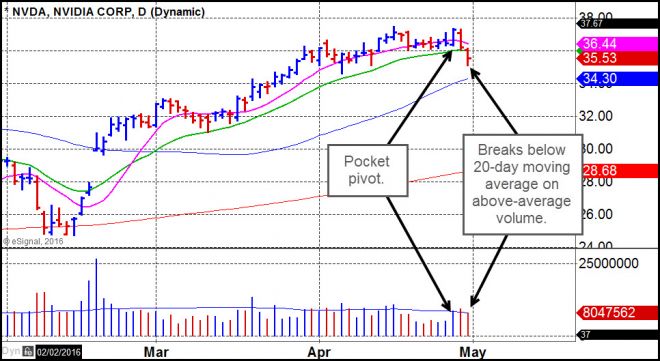 GM - With most semiconductors starting to roll over recently after having strong moves off of their February lows, the group has been getting a bit too obvious as an area of strength. NVDA was best buyable on its pocket pivot of mid-March, where it was less obvious. Now with the stock dropping below its 20-day moving average on above-average volume and earnings expected out this week, I wouldn't touch this.

Dr. K - Thursday's break below the low of its recent consolidation is cause to sell or at least not buy on weakness as this type of weakness should be avoided. Had one bought, one would have sold the next day as it pierced its 20-day moving average. 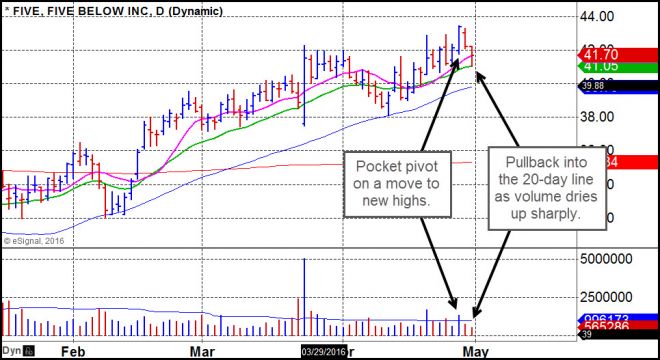 GM - Again, a situation where a stock has already been trending higher off of the February lows, and once it gets to or near new highs it becomes just too obvious. However, the pullback into the 20-day line where it found support on Friday as selling volume dried up sharply, might present a lower-risk entry that is less obvious to the crowd.

Dr. K - The current bounce off its 20dma on Friday offers a lower risk entry point for the stock. Being a retail stock, it tends to have sharper pullbacks so should be bought on weakness, not strength. 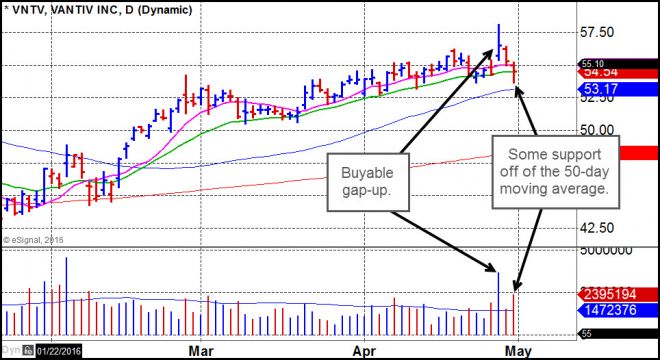 GM - VNTV quickly failed on its BGU attempt of this past Wednesday. It has generally been the case that when a stock is gapping to new highs the move is sold into by institutions. This may be due to the fact that the stock is already well-extended off of the February lows in a market that mostly sees stocks rally off of low points within their chart patterns and then begin to falter once the move reaches or approaches new highs, at which point it becomes a bit too obvious. The pullback into the 50-day line on Friday might bring this into a lower-risk buyable position as opposed to chasing the BGU, using the line as a guide for a tight stop.

Dr. K - It broke below the low of its BGU day by more than 1-2% so should have been sold. Further, the current market has taken the hardest knock over the last couple of days since it began its rally in mid-February, so any new buys should be made with caution and of course, on constructive pullbacks, so your risk is minimized. 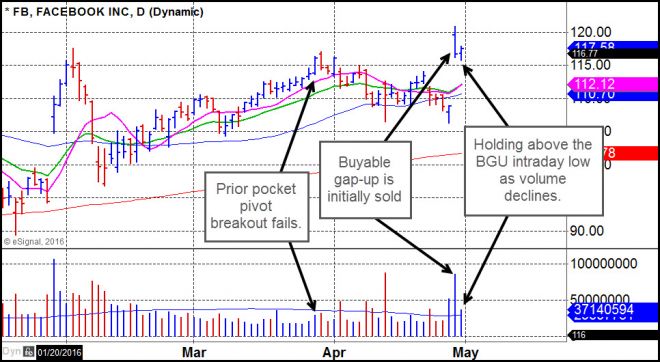 GM - FB was able to hold its buyable gap-up move of Thursday as it dipped less than 1% below the 116.25 intraday of Thursday's BGU price range. The stock is sitting in an optimal buy position given the close proximity of the 116.25 selling guide.

Dr. K -  FB is a leader and has acted well relative to the other big cap technology names which, as an aggregate, are faltering. Still, the market's recent pullbacks have been deeper than any since the rally began in mid-February. That said, QE could keep this correction to a minimum. Still, any new buys should be made with minimal risk. If one buys FB at Friday's closing price, risk is 3% if allowing a 2% undercut of FB's BGU, otherwise 2% if allowing a 1% undercut.

Below is the most current spreadsheet for pocket pivots and buyable gap-ups that we've reported on since March 1st. 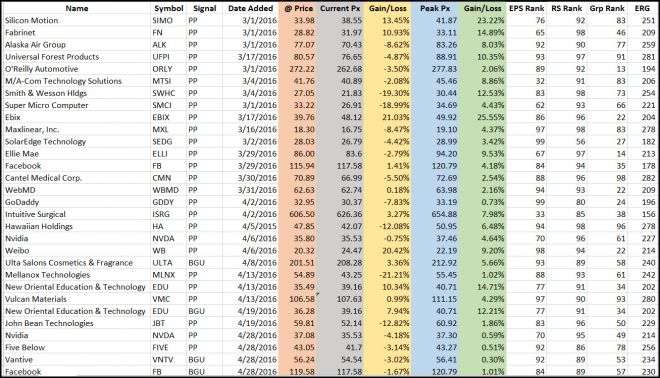 GM - this spreadsheet shows that stocks that exhibit strength in the form of a pocket pivot or buyable gap-up in this market tend to hold up for a relatively short period of time. There are absolutely no massive, intermediate- or long-term trends to play. Of 28 pocket pivots and buyable gap-ups for which reports were sent out since March 1, only 11 are higher than they were at the time of the report. Most, however, have had at least some sort of gain from the time of the report to their peak price following the report. Only five are showing current gains of 10% or better, while only 7 had gains of 10% or better up to their peak price following their initial report. Only 14 ever showed a gain of 5% or more up to their peak price following their initial report. My observations are that one can make progress with these signals by a) looking to buy on subsequent pullbacks rather than chasing the initial strength, b) avoiding junky, smaller names that trade only a couple hundred thousand shares a day, and c) being active in taking profits when you have them. This is not an easy market by any stretch, and the PP and BGU data prove this out - however one can make progress IF one takes a slightly anti-momentum approach as I've described.

Dr. K - Controlling risk is the most important rule in investing. 2016 has been a fairly wild ride so far. It has been most imperative to buy on weakness so that losses from losing trades are kept to a few percent. The few gains that have materialized have been sufficient to more than make up for any small losses provided one takes profits in context with the overall chart. The market headwinds remain so another steep correction could be near, but the future does not exist so staying in the present is key. So far, the current correction could continue thus keeping stops tight and restricting buys to only the best risk/reward entries could be prudent. Should QE create a shallow floor in the current correction, new buy opportunities should emerge.