Since the 1980s, we get lower highs and lower lows in interest rates as measured by the Federal Funds Rate. 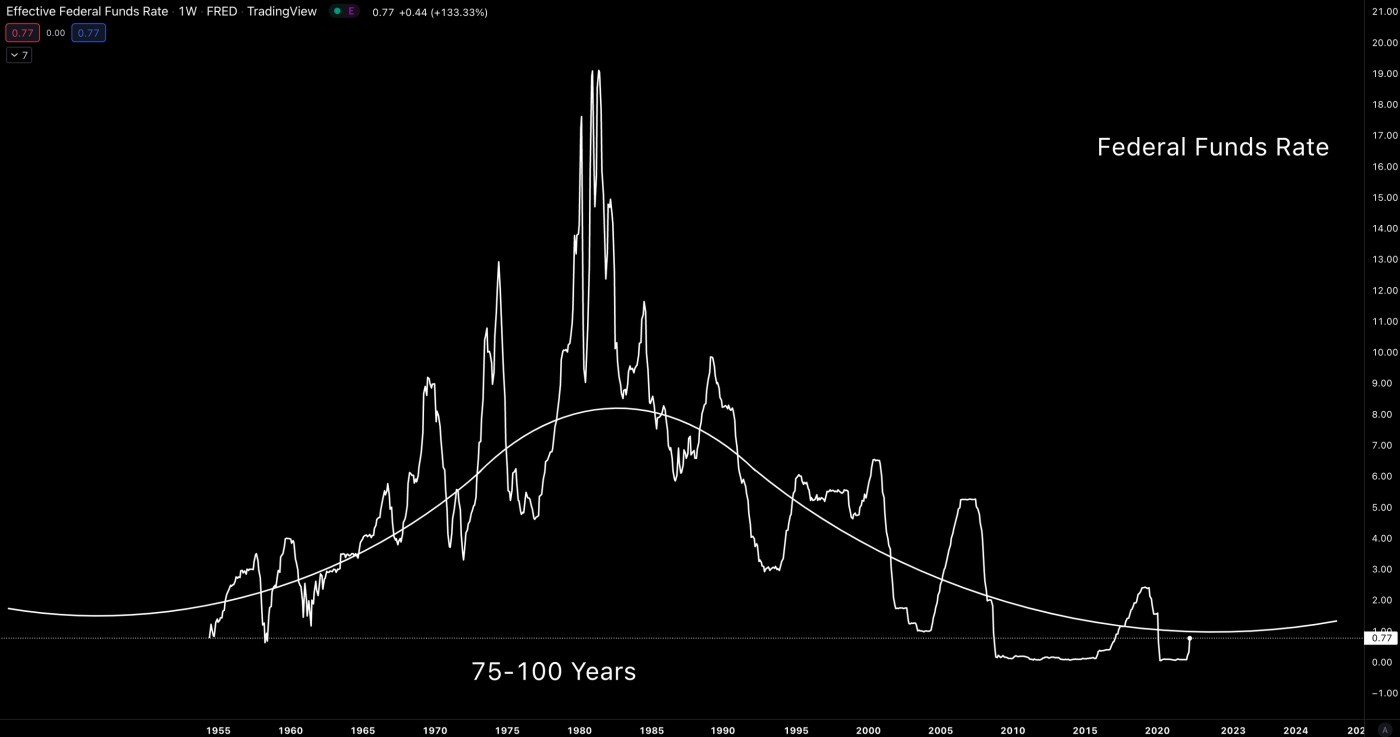 This has led those such as Ray Dalio to speculate that we are nearing the end of the "75 year debt cycle" which is roughly 75 years give or take 25-50 years. Dalio has studied cycles going back several hundred years. When this long term debt cycle comes to an end, revolution and war typically break out as hyperinflation from excessive money printing is often one of the catalysts. Interest rates can only go so low before the system destabilizes. The fiat of the winning country then enjoys world reserve currency status. The U.S. dollar achieved this at the end of World War II.

If we expand this out back to 1790, we see that inflationary periods were caused by war. COVID-19 could be considered a war of sorts. In other periods since 1900, interest rates were sufficiently high enough for the Fed to lower rates to spur economic growth such as in June 1932 when the Fed aggressively started to lower rates spurring the largest bull market in the Dow Jones Industrial Averages over the next several months where it doubled it price. We also have the Vietnam War in the late 1960s then the oil embargo of the 1970s which spurred inflation. But interest rates were pushed to record high levels by the Fed chair Volcker at the time, so he had much room to reduce rates to spur the economy. 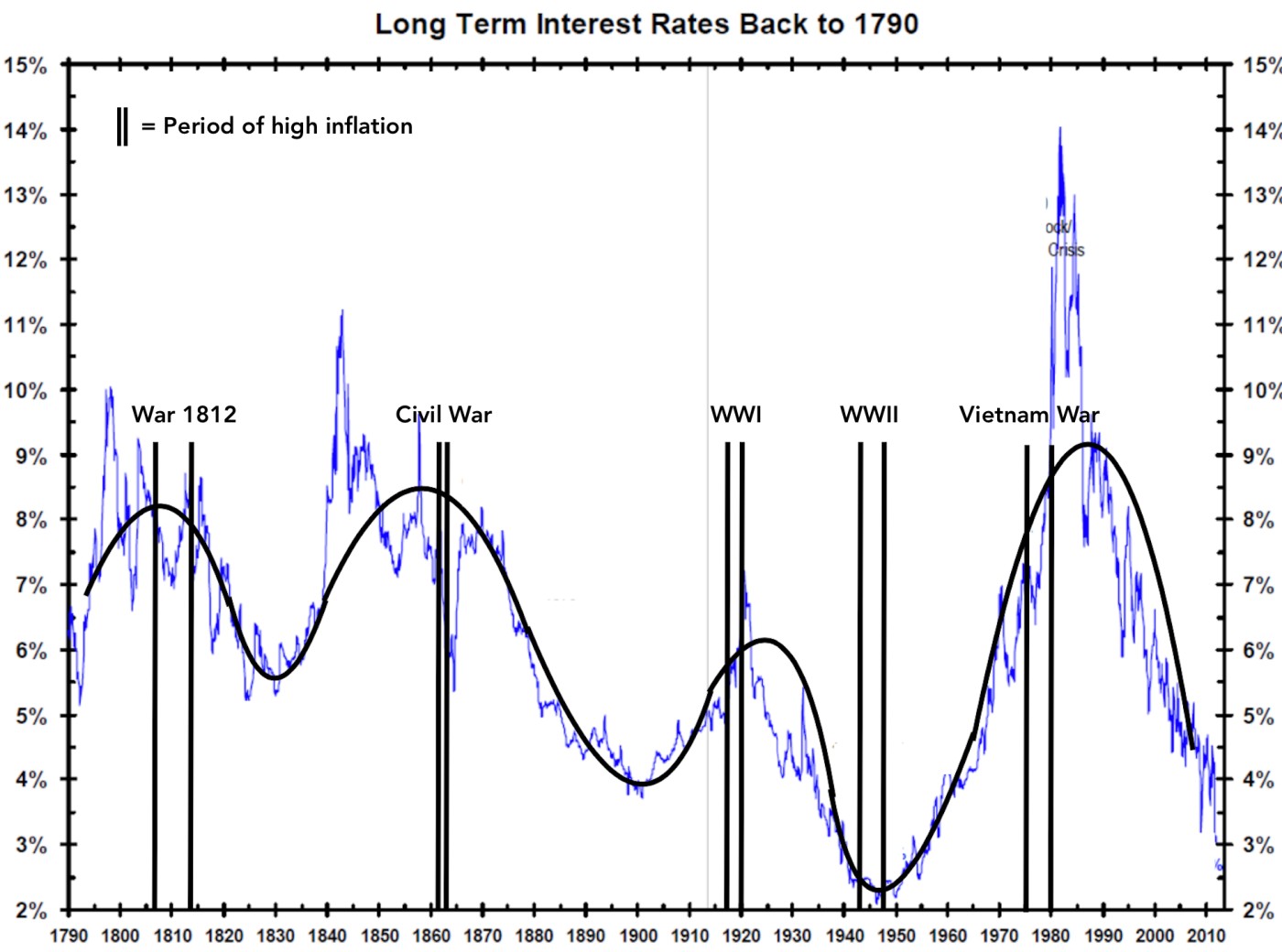 Today, interest rates are near the floor while inflation is soaring and debt is at record levels. This suggests a major tipping point of change is coming. The Fed can keep raising rates but this will kill the debt markets spawning bankrupties galore and making the 1930s look tame. When the Fed hiked by 75 bps at its last meeting on June 15, 2022, debt increased by nearly one trillion dollars which shrunk GDP by -3.8%. If they hike by another 75 bps (225-250 bps) when they meet on July 27, 2022, debt will increase by over one trillion dollars and shrink GDP by -4.7%. They simply cant keep hiking rates to their target range of mid-300 bps from where the Fed Funds Rate currently stands at 150-175 bps.

The rate of 10-year Treasurys is not sustainable. Going back to the early 1980s, the 10-year is way above its downtrending line because the Fed has aggressively hiked rates with the expectation that they will continue to do so. 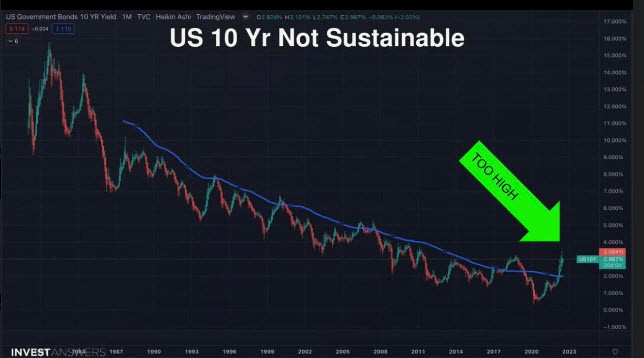 Instead, they will eventually find a reason to launch the next iteration of QE which will reverse whatever rate hikes they make, eventually sending rates back to 0%. They will also allow inflation to run high because this reduces debt while debasing the U.S. dollar. Meanwhile, the real CPI will continue to be covered up by the fake CPI which exaggerates GDP.

Some have suggested 50-year and even 100-year bonds are in the offing. They would act as inflationary buffers as dollars flow into an instrument where it doesn’t move for a long period of time. Home owners would have lower monthly mortgages making inflation more affordable. But this is like putting a bandage over a tumor.

Exponentially growing technologies (ExpoTech) such as AI and blockchain will materially contribute to wealth creation thus real GDP growth. Quite the opposite of QE. Decentralized and permissionless networks such as DAOs will have their own tokenized ecosystems. Layers of middlemen, ie, rent takers, are removed. This future is a world driven primarily by digital tokens where the U.S. dollar is no longer the world's reserve currency. These digital tokens can exist within other financial ecosystems such as Ethereum, while digital currencies/commodities such as Bitcoin can co-exist with these other ecosystems. As more of the world's value becomes digital, countries and businesses will put more of their value on digital currencies/commodities and tokens.

The CPI number came in hot as it did last month as the dead bat rolls over once again. If market action rhymes with the hot CPI number the prior month, stocks and crypto will tank over the next few trading days before becoming oversold then dead bat bouncing again. 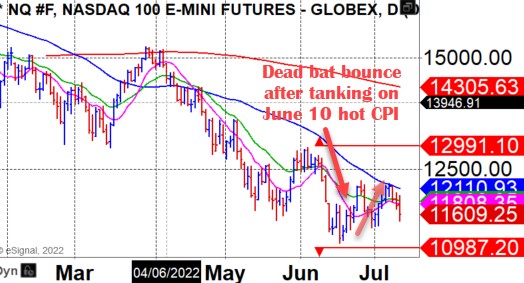 The big buy signal comes when Powell halts or reverses hikes. Until then, I remain short stock ETFs as per the Market Direction Model and cryptocurrencies. The Fed is likely to halt the hikes once unemployment moves higher by at least 2%, or the SP 500 has tanked somewhere between 40-50% from peak. Halting may be equivalent to their halt in Jan-2016 when stocks and crypto started to trade in a mildly higher uptrend. The big bull in stocks and in crypto didnt start until late 2016 for crypto and early 2017 for stocks. Hike halting also occurred in Jul-2006 and Jan-2019 after which markets also had mild uptrends. Certainly shifting from halting to QE5 would be a very bullish event but that may be a year off due to the long tail of persistent inflation. The Fed's mandate is full employment and stable prices. Because of this, some say a recession is no reason the Fed would stop hiking rates. But because the Fed and higher ups have big holdings in stocks, bonds, and real estate, Powell will find a reason to halt then reverse hikes if several hundred years of history is any guide. Indeed, the Fed has never hiked rates in a recession. The soaring inventory-to-sales ratio would offer such a reason in the coming months as retail prices plummet, allowing the CPI to moderate. In the meantime, material gains can be made from those rare stocks and cryptocurrencies that show fundamental and technical leadership.

To sum up, markets have been crushed as economies die. Consumer confidence is at an all-time low. The record levels of debt cannot handle higher rates of interest. Rates peaked at 3.2% in 2018 when there was $9 trillion less debt. For the Fed to target 3.8% by 2023 is a pipedream. Rates have never been raised in a recession. A most serious one is staring everybody in the eye. The Fed will continue to hike, delaying the halt or reversal of rate hikes if they want democrats to fail during midterm elections this November. This will push markets even lower and GDP more negative. Caveat emptor!
Like what you read?
Let us help you make sense of these markets by signing up for our free Market Lab Reports:
This information is provided by MoKa Investors, LLC DBA Virtue of Selfish Investing (VoSI) is issued solely for informational purposes and does not constitute an offer to sell or a solicitation of an offer to buy securities. Information contained herein is based on sources which we believe to be reliable but is not guaranteed by us as being accurate and does not purport to be a complete statement or summary of available data. VoSI reports are intended to alert VoSI members to technical developments in certain securities that may or may not be actionable, only, and are not intended as recommendations. Past performance is not a guarantee, nor is it necessarily indicative, of future results. Opinions expressed herein are statements of our judgment as of the publication date and are subject to change without notice. Entities including but not limited to VoSI, its members, officers, directors, employees, customers, agents, and affiliates may have a position, long or short, in the securities referred to herein, and/or other related securities, and may increase or decrease such position or take a contra position. Additional information is available upon written request. This publication is for clients of Virtue of Selfish Investing. Reproduction without written permission is strictly prohibited and will be prosecuted to the full extent of the law. ©2023 MoKa Investors, LLC DBA Virtue of Selfish Investing. All rights reserved.
FOR OUR FREE MARKET LAB REPORT :