It is not surprising given the perfectly choppy nature of recent months from May 2012 to August 10 (the date of this writing) that the Market Direction Model has had a string of false signals with six of the last seven signals being false. The level of volatility is just enough to trigger the model's signals as has recently been the case:

=As the general markets move higher on volume, leadership starts to assert itself, and a follow through day occurs causing the model to switch to a buy signal.

=As the general markets move lower on volume, distribution days pile up, leadership breaks down, causing the model to switch to a sell signal. These "perfect" ping-pong swings of this slope and volatility as can be seen on the DAILY chart below have not been observed in the past on the major index, the NASDAQ Composite. 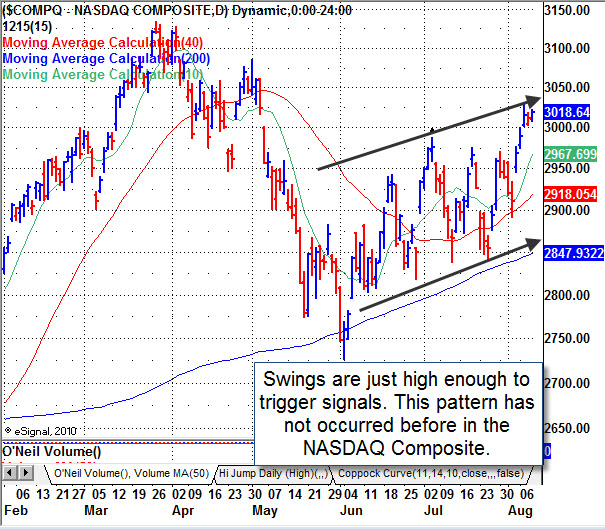 It was also not surprising given the more volatile but rocky, upward drifting nature of much of 1999 that a string of false signals also occurred back then as can be seen on the WEEKLY  chart below. Note, since this is a weekly chart, the sideways rockiness of the weeks shown between the arrows should be compared against other parts of the weekly chart. 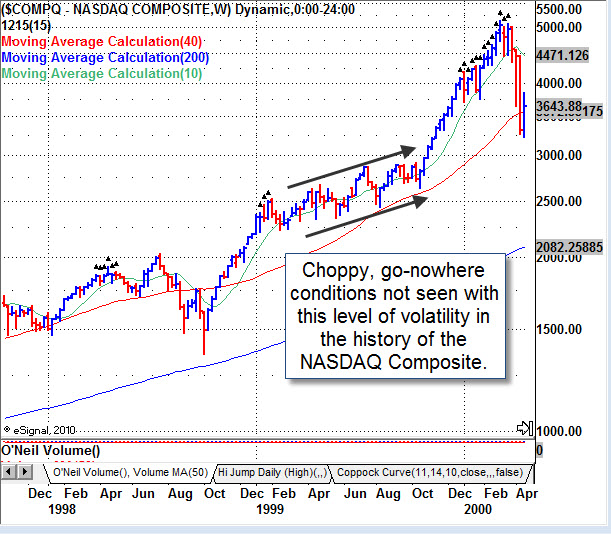 Fortunately, these periods by examination on a weekly NASDAQ chart going back to its inception in the early 1970s reveal that these are, so far, one-time occurrences. Markets are never static in their patterns in that patterns tend not to repeat but rhyme. As Mark Twain once said, history never repeats but it often rhymes. The market's rhythm is how the Market Direction Model has managed to outperform every cycle so far, though during unusual situations, it can be frustrating to sit through a string of false signals.

But what does not kill us can make us stronger if we stay focused and aware so we can grow through the challenges. The stock market has a way of tiring out the majority just at major turning points such as in October 1999 when William O'Neil said the markets are finished, then a few days later, the markets were off to the races again. Or from January-July 2011 after months of trendless action, when the model's false signals came before the string of highly profitable true signals as MDM caught the major short-term moves in the general market.

With difficult periods in mind, the pocket pivot and buyable gap up concepts were born in 2005 after a two-year period of frustrating, compressed, sideways market action, unlike that of the 1980s and 1990s. Note in the figure below how the arrows on the left hand side are shown for the period May 1997 - March 2000 while the arrows on the right hand side are shown for the period January 2004 - December 2005. Quite a difference.

That said, MDM has always been an evolving strategy in that it accounts for the very rare material changes in market conditions as it did in early 2009 at the start of quantitative easing which enabled it to outperform up until this year, or in 1998 with the advent of leading internet stocks with no earnings.

MDM is currently accounting for recent conditions which are anomalous but are resulting in a perfectly treacherous environment. While the model will not adjust its parameters as current conditions are anomalous, much as much of 1999 was anomalous, it will now have fail-safes at no greater than 1.5% as measured by the NASDAQ Composite (QQQ good proxy) during such conditions. The recent wide banding in the general averages caused the model to have greater than normal fail-safes. In our research laboratory, we found a better way to manage risk/reward, thus the new fail-safe given the current environment will be at a 1.5% maximum.

=The markets move higher in baby steps on low volume spurred on by quantitative easing while the lack of leadership and lack of a proper follow through day keeps the model in cash. This can be frustrating in and of itself though the window would not be open as it should in such a situation. Capital preservation is more important than worrying about missed profits during such challenging periods.

=The markets move lower once again on repetitive negative news. Should another crisis in Europe or further signs of global economic malaise occur, this would keep the model in cash instead of a sell as quantitative easing acts as a safety net for further downside. This, of course, is barring some major catastrophe, in which case, the model would switch to a sell signal as the markets would probably undergo a substantial correction, as central banks only then would step in to provide their safety net in the form of robust quantitative easing.

=The markets move strongly ahead on volume on evidence of a substantial amount of new monetary easing out of Europe and/or the US. Or a "Romney Rally" of sorts gets underway as the market begins a new uptrend into the election. This would put MDM into a buy signal. European officials have intimated that the ECB is about to unveil a massive QE-type plan, and continued headlines like this appear to keep a bid under this market.