Whenever we see a base-on-base formation, it reminds us of an "old flame," Oracle Corp. (ORCL), which we played very well in 1999 as it launched from a base-on-base formation and nearly quadrupled into March of 2000 when the stock and the market finally topped. Rovi Corp. (ROVI) has some of the initial features that ORCL had when it broke out from its base-on-base formation in 1999, as you can see from the two daily charts below. The first one is ROVI in 2010, which is displaying a lot of power as it comes up and out of this base-on-base formation. This is what we might expect on a breakout from such a pattern, since it is generally built during a market correction and indicates that the stock really wants to go higher, but the weight of the general market is still keeping it from doing so, so it simply goes about the business of building another base on top of a prior base. Note that ROVI began working on both of the bases in its formation all while the market went into its correction in late April. 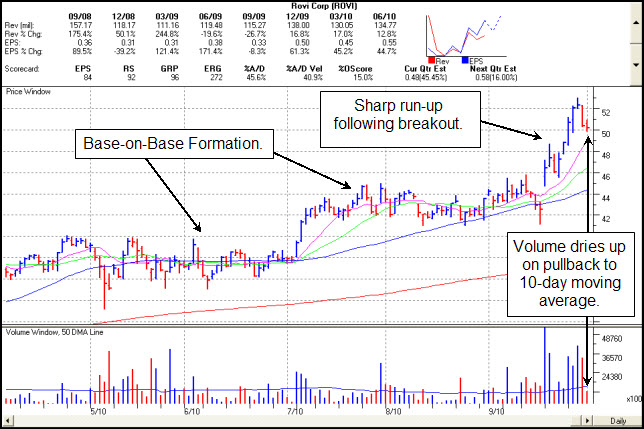 Oracle Corp. (ORCL) in 1999 broke out in similar fashion, thrusting to the upside very quickly after breaking out of its base-on-base formation, which was built under the same bear market/market correction conditions throughout much of the summer and early fall of 1999. Once it broke out however, it barely looked back as it simply "nodded" in the general direction of its 10-day moving average before launching higher. Is ROVI another ORCL in 1999? So far it acts in similar fashion, and since the market is always about possibilities, we think this comparison offers some interesting food for thought, particularly since the ORCL example is so near and dear to our hearts, having been featured in our new book, "Trade like an O'Neil Disciple: How We Made 18,000% in the Stock Market." 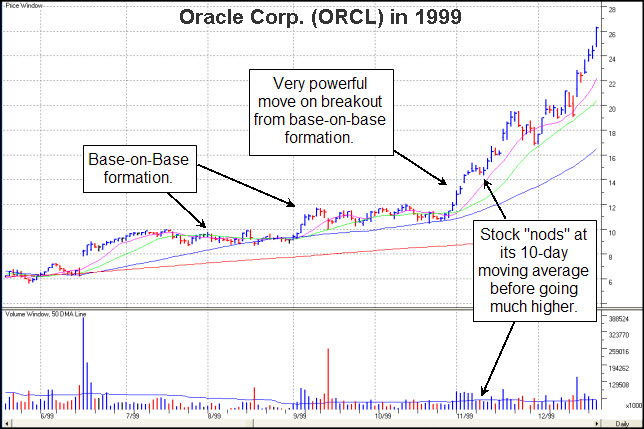