General markets rallied Friday on lower volume, with the NASDAQ Composite Index finally breaking out of its baby-step rally and the S&P 500 and Russell 2000 all moving to higher-highs. The S&P 500 also broke through the allegedly psychologically significant 1500 level.

Economic news was bullish with consumer sentiment, construction spending, and manufacturing ahead of consensus. While unemployment rose, the payroll numbers for November and December were adjusted appreciably higher. With the Fed indicating last September that future monetary policy operations would be keyed to unemployment and GDP growth and setting a target of a 6.5% unemployment rate as the threshold for ending QE, the uptick in the unemployment rate to 7.9% was viewed by the markets as cementing QE policy for the forseeable future. This is seen as a positive for money flows into stocks.

Money flows are also being aided by the $77 billion that individual investors moved into equity mutual funds in January, the most seen over any four-week period since 1996. Bonds broke out to fresh lows, as the chart of the iShares Barclay's 20+ Year Treasury Bond Fund (TLT) shows. This could be signalling or confirming a macro-asset-allocation shift out of bonds and into stocks which would further build the case for increased money flows into stocks. 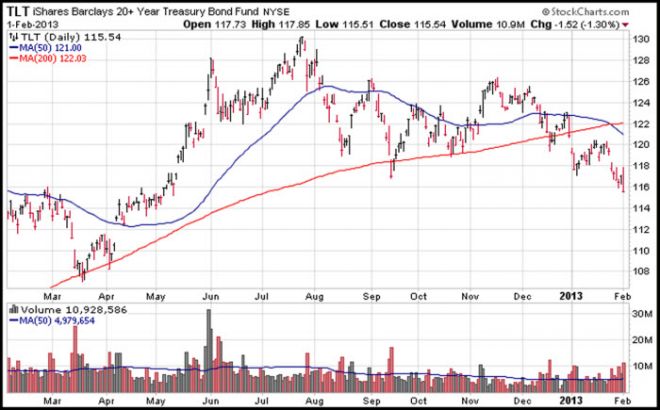 Non-U.S. economies are having an increasing impact on U.S. companies. For example, China is economically growing at least three times as fast as the U.S. economy, is a big consumer of commodities, and looks to be coming out of its slowdown. Meanwhile, economic growth in Europe is recessionary, and Japan has been mired in one of the longest recessions in his history. As emerging economies such as China well outpace growth in mature countries, a balance of power between the creditor (China, India, Brazil) and debtor (U.S., Europe) nations is emerging. China's impact on the world should be bullish should its growth rates return to normal.

The money printing from QE in all its forms from QE1 to QEternity has not helped spur economic growth but rather has ended up on bank balance sheets. Reported inflation therefore remains low, though commodity prices are on the rise as hard assets benefit from this money printing. Through QE, the Fed would like to see economic activity rebound globally. Inflation should increase on all levels but could serve to propel markets higher should a smooth handoff from QE to economic recovery takes place. Of course, reality is rarely a smooth phenomenon, so the question is whether the emerging juggernauts such as China and India can spur enough growth to counter the negative long-term effects of QE. It is perhaps the mother of economic balancing acts.

Regardless of what happens, our strategies will stay focused on the price/volume action of major indices and leading stocks to guide the way. The current rally has been led equally by so-called "junk-off-the-bottom" stocks as well as legitimate growth leaders exhibiting the classic characteristics of strong earnings and sales growth and improving profitability. While there have been some false starts and breakdowns in certain leaders as the market has rallied sharply in January, we would look for the rally to continue to be fed by rotation in other areas and sectors of the market. As well, we would expect that as this develops we will see pocket pivots, buyable gap-ups and other actionable buy points in newer, emerging leaders that show up along the way, and our real-time reports will provide timely alerts to such situations as they occur.