When the market tops, your best short-sale candidates will be those those stocks that were the upside leaders during the prior rally phase or bull market. In this manner, your initial list of short-sale target candidates will actually come from your prior buy watch list as leading stocks start to break down. Those stocks that institutions piled into during the prior bull market now become areas of the market from which institutions start to pile out - the typical "pile in, pile out" principle that is the backbone of our short-selling methods. This concept is discussed in detail in the two short-selling books I've authored or co-authored, How to Make Money Selling Stocks Short (co-authored in 2004 with Bill O'Neil) and Short-Selling with the O'Neil Disciples: Turn to the Dark Side of Trading (John Wiley & Sons, April 2015).

In this market we've seen several leading stocks from our Focus List, what is a long watch list of buy candidates, break down in earnest. These include prior leaders like Applied Optoelectronics (AAOI), Lumentum Holdings (LITE), Baozun (BZUN), Coherent (COHR), Momo (MOMO), and many others. In each case the breakdown started with a failed late-stage base or a failed late-stage base breakout. This is the "late-stage failed-base" or LSFB short-sale set-up that is discussed in the most recent short-selling book. Note that these stocks began breaking down in recent weeks, presaging the current general market situation where we see the indexes and leading stocks under selling pressure of their recent peaks. Whether this develops into a full-blown correction or bear market remains to be seen. But whether it does or doesn't, short-sellers want to be prepared by being acutely aware of where potential failures in leading stocks are occurring or where they might occur next.

Nvidia (NVDA) is an example of a leading stock that is currently on my "failure-watch" list of leaders that might be wobbling after forming what is arguably a later-stage base in what has been a stellar, but longer-term and by now quite obvious uptrend. We first put NVDA on our Focus List back in the early second quarter of 2016, when it was trading nearer to the $40 price level, and it has had an amazing run since then. This is what that run looks like on a weekly chart: 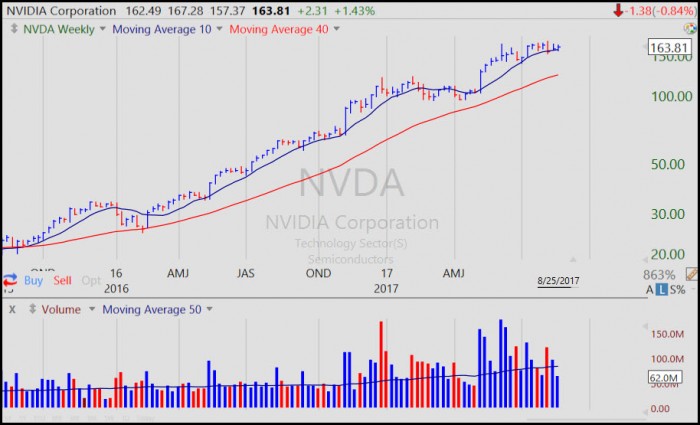 On the daily chart we can see that NVDA has come under some selling pressure during the summer of 2017, including one big-volume reversal in early June and then a big-volume gap-down in early August after earnings. The latest breakdown occurred as part of a later-stage base breakout two weeks ago. The breakdown was immediately viewed by late-comers who saw the decline as a "buying opportunity," and this pushed the stock back above its 20-dema. It has since bounced off the 50-dma once and is now back above the 20-dema.

Nevertheless, the prior breakout failure remains in force since the stock has not been able to get back above the breakout price point just a few cents below 170. That likely represents a near-term resistance level, and rallies up to or near 170 may represent very early LSFB short-sale entry points. There is some risk that the stock will break out again, but that would likely only happen if we saw the general market find its footing and move to new highs as well. So context is important here. If we see the market break down this coming week, then a breach of the 20-dema  from here could set the stock up as a short-sale entry at that point, and is something to watch for. For reasons just cited, we would want to use the 20-dema as a guide for a tight upside stop in case the trade didn't work. 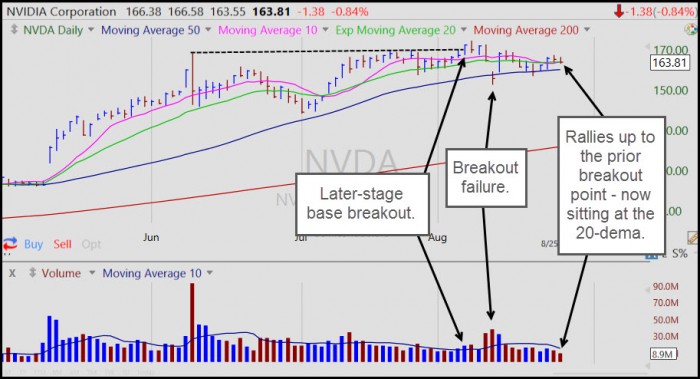 Here's an example of a stock that has started to confirm as a possible LSFB short-sale set-up, Broadcom (AVGO). The company reported earnings on Thursday after the close, and after a brief rally attempt rolled over and broke below its 20-dema and its 50-dma on very heavy selling volume. This would trigger a short-sale on Friday's breach of the 20-dema while using it as a guide for an upside stop. Note that AVGO closed just below the 50-dma but is undercutting prior lows from last week right at the 50-dma. This could set up a small bounce back above the 50-dma, but I would be inclined to view that as a potential bounce to short into, particularly if it pushed right back up into the 20-dema on weak volume. 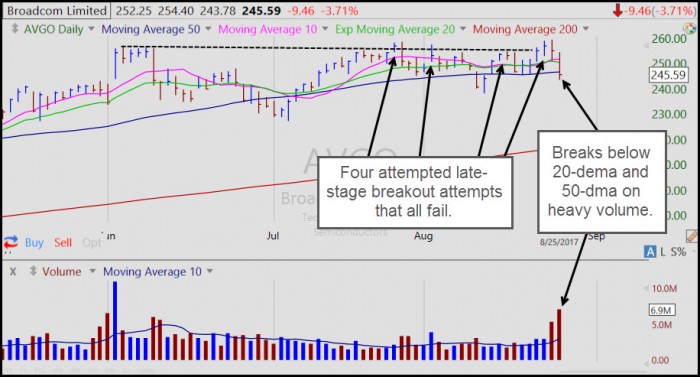 We saw a couple of weeks ago how optical names, a previously strong, leading group in the 2017 market rally phase, have broken down together, including former Focus List names like Lumentum Holdings (LITE) and Applied Optoelectronics (AAOI). Both of these are not in full breakdown mode, and after the initial breaks as the stocks formed LSFB short-sale set-ups, we may see these evolve into head and shoulders tops. Often, when shorting, the "wolf pack" principle generally shows up in the form of formerly leading groups like the opticals coming apart together.

So, given that AVGO is a supplier to Apple (AAPL), we might look at another potential LSFB in the making in another AAPL supplier, Skyworks Solutions (SWKS), below. Here we see the stock starting to drop out of the bottom of the handle area of a later-stage cup-with-handle base. The first sign of trouble occurred in early August when the stock dropped below the 20-dema. Note, however, that since then the stock has simply chopped around in what is now a three-week price range as it alternately moves below and then back above the 50-dma.

At this stage we can consider the movement since the peak of the handle in mid-July as forming a steady downtrend channel with lower highs and lower lows. On Friday, SWKS ran into resistance at its 20-dema and then closed just below its 50-dma. This could present a short-sale trigger and entry right here using the 20-dema as a guide for a tight upside stop. Keep in mind that this is the concrete, objective set-up we are seeing in real-time, but it is not guaranteed to work. Over the past three weeks we've seen other breaks below the 50-dma that have resolved in the stock just moving back above the 50-dma, faking out sellers and short-sellers. Now, however, the stock has spent a period of time moving sideways, which may be setting the stock up for a break at this time, and this would most likely coincide with more general market weakness this coming week. 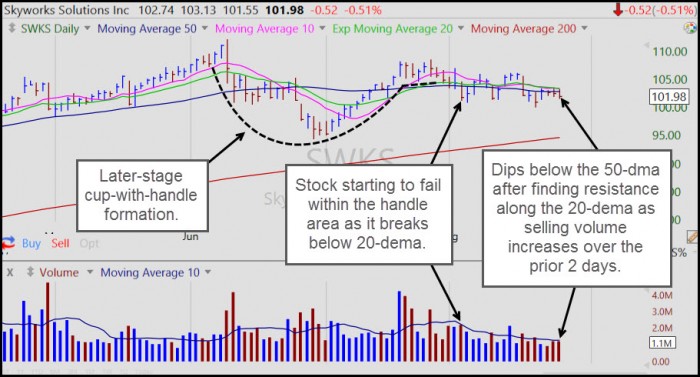 To get a sense of how "late-stage" SWKS is we can look at the weekly chart below. This reveals a narrow, v-shaped cup-with-handle formation that has formed right at the right-side peak of a big "punchbowl" formation. Note that the left side of the punchbowl presented a great downtrend for short-sellers to play all the way down after the stock peaked in late July/early August of 2015, just before a sharp market breakdown that culminated in the "mini-Flash Crash" of August 24, 2015. This gives us a macro-sense of where the stock is in its overall movement off the lows of early 2016 and helps in assessing the probability of success on the short side from here, based on the current, real-time LSFB set-up. 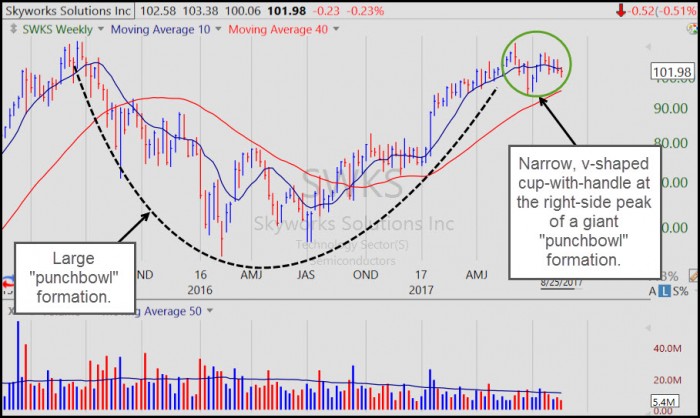 Below is a short spreadsheet of some LSFB situations among leading and formerly leading stocks that I am watching which are either confirmed LSFBs or which are in position for possible failure. Those that I consider to be in position for possible failure, hence on "Failure-Watch," are leading stocks that are in longer-term up trends, hence potentially "later-stage." You will notice that stocks on Failure-Watch are currently sitting within these potentially later-stage bases. 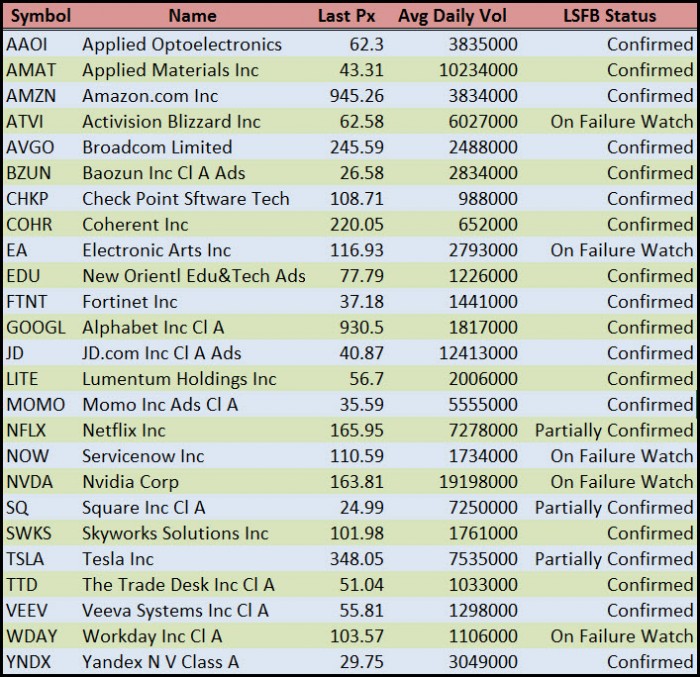 One of the interesting and useful points I would make about this list is that it gives us a pretty good idea of some of the deterioration that has occurred in recent weeks "under the hood" of the general market. I also consider this to be a pretty decent short-sale watch list for the current environment, although it represents only a portion of the stocks currently on my own LSFB watch list. You may see us issue some real-time Short-Sale Set-Up reports on some of these stocks in the near future, depending on where any short-sale entries might occur. However, if you know what to look for and spend the time to study the daily and weekly charts of each of these names in the list, you might find some that are already in potential short-sale entry positions all on your own. Also, by reviewing your own recent buy watch lists, you may find more leading stocks that are in similar late-stage failed-base (LSFB) type situations.