Current Focus List
There are currently no names on the Focus List
The VoSI Focus List is a compilation and reference list of stocks for which Pocket Pivot or Buyable Gap-Up Reports have been issued and which have been deemed suitable for inclusion on the Focus List. Not all stocks for which a Pocket Pivot or Buyable Gap-Up report has been issued will necessarily be added to the list. It is not intended as a "buy list" or a list of immediately actionable recommendations. Stocks on the list may or may not be in proper buy positions, and investors should exercise discretion and proper judgement in determining when and where stocks on the Focus List can be purchased. The following notes are intended to assist in this process. Please note that members can enlarge the Focus List image by clicking on the body of the email and then holding the Control Key while pressing the "+" key until it is large enough to read.
General Observations:
The general market is in a four-day rally attempt off the lows of last Monday. A three-day rally ended on Friday with a reversal off the intraday highs by all of the major market indexes as they closed negative for the day. The NASDAQ Composite Index, below, along with the S&P 500 remains well below its 200-dma, which would serve as near-term resistance for these indexes. 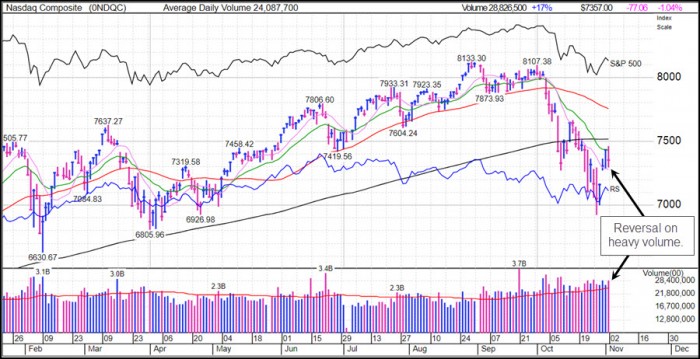 The Dow Jones Industrials Index traded below its 200-dma on an intraday basis on Friday, but rallied into the close to regain its 200-dma on lighter but above-average volume. While the indexes flopped around on Thursday and Friday on various reports and comments from President Trump about a thawing of the current heated trade dispute between the U.S. and China, the market action this coming week will likely find a more significant catalyst one way or the other in the Tuesday mid-term elections, where majorities in the House and, to a lesser extent, the Senate are at stake. In any case, the jury is still out on the general market action, as a retest of the Monday lows strikes us as a real possibility, depending on how the coming week's news flow plays out on any number of fronts.

We sent  out several Pocket Pivot and Buyable Gap-Up Reports this past week, but very few are making any real upside progress, outside of Viomi Technology (VIOT) which has posted two pocket pivots over the past two days and is one of the few coherent bases we have seen in this market. Here we see a buyable gap-up and base breakout move in Zoetis (ZTS) that immediately fell back into the base. However, the stock closed Friday just above the intraday low of Thursday's BGU price range, keeping it actionable and also at a lower-risk entry position. If it fails to hold the 91.96 intraday low of Thursday, then that would serve as a tight selling guide from here.

Pacira Pharmaceuticals (PCRX) posted a very strong volume breakout and pocket pivot on Thursday, but after a brief flirt with new highs on Friday, the stock reversed badly on a near-term breakout failure. However, true support lies below 50 and closer to the confluence of the 10-dma, 20-dema and 50-dma. Therefore, in a situation like this, as with any extended pocket pivot, it is best to seek to enter on constructive weakness into support rather than chase something sticking straight up in the air as PCRX was doing on Thursday. In this position it is in a lower-risk entry area, using the 10-dma/20-dema confluence as a tight selling guide. The other issue is that the current market correction remains in force, despite a four-day rally attempt off the Monday lows. If the market rolls over from here, then all long ideas are off the table, particularly if they break near-term support. We saw this happen in early October, when a large number of nascent breakouts and pocket pivots we reported on at that time failed very quickly. Thus, it will pay to stay alert, but if the market stabilizes, then some of these names like ZTS and PCRX would be some of your first candidates for inclusion on your long watch list.

The Market Direction Model (MDM) moved to a cash signal on Friday morning on the China trade news, strong jobs report, and market action in prior bounces such as last February which suggested the market could go either way (higher or lower) thus sidelines at this juncture was the safer play. In February after the correction, the market bounced for 3 days, then jumped higher over next 3 days (Feb 9-16).