The market rally off the lows of mid-March has lost momentum as the S&P 500 encounters resistance at the early February highs. It is now testing support at its 200-day moving average. If it holds support at the 200-day line then the rally could remain in force. So far, we see Thursday's action as a double-top failure on heavy selling volume. 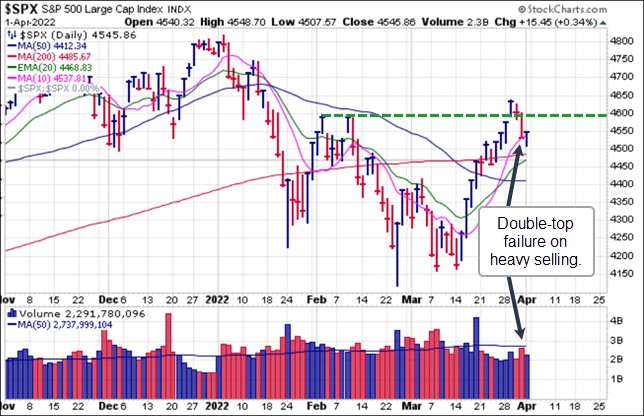 We remain cautious on this market despite the rally off the mid-March lows, which strikes us as more of a bear market rally than the start of a new bull phase. In any case, we are not convinced that this is anything more than a swing-trader's market for now, as we've seen both the long and short sides of this market work at various times and often with the same stocks.
The action in Advanced Micro Devices (AMD) attests to this. It was acting well after bottoming with the market in mid-March, posting a pocket pivot at its 50-day line last week as we reported at the time and then moving higher. That move has now failed miserably as the stock has slashed below its 50-day and 200-day moving averages on Thursday after posting a bearish outside reversal on Wednesday. Skilled short-sellers familiar with the methods discussed in our book, Short-Selling with the O'Neil Disciples (John Wiley & Sons 2015), could have acted on the stock as a short yesterday as it gapped through the 200-day line which would then serve as a covering guide. 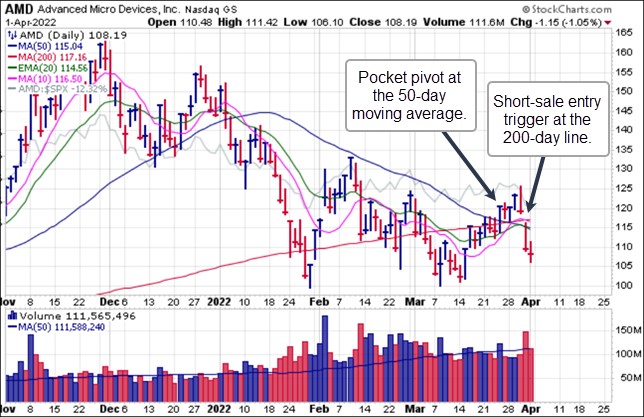 A sampling of nine big-stock semiconductor names illustrates the sudden change in character these names demonstrated as the market move into the second half of the week. Most of the names shown below triggered short-sale entries along their 50-day or 200-day moving averages and show the tendency of stocks to change course just as they begin to build up constructive-looking price/volume action. 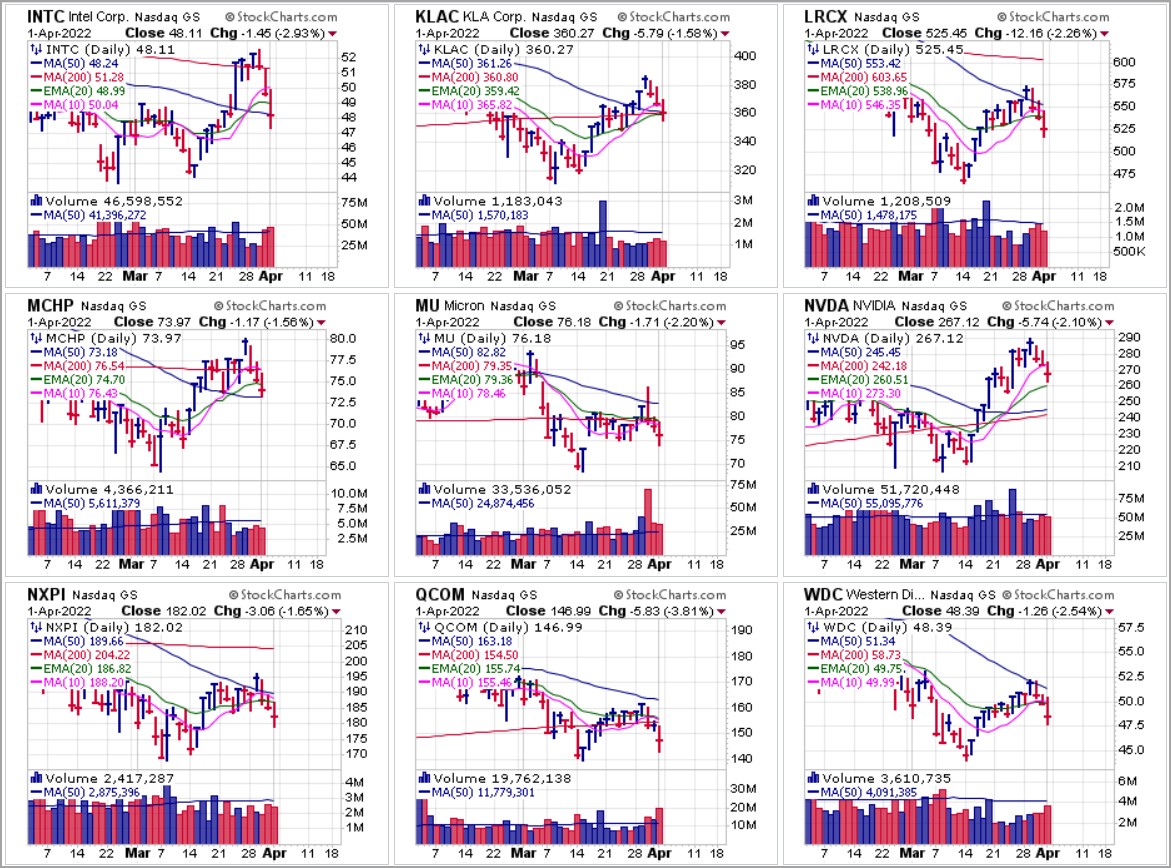 Meanwhile, as interest rates rise, something that is generally considered as a major positive for financial stocks, the group is lagging badly. Several big-stock financials morphed into shorts along moving average resistance this past week. Is this a cautionary signal for the market in general?

Financials and semiconductors were rallying brisky off the March lows before losing momentum more recently and turning back to the downside. Other groups may become vulnerable in the coming days, such as infinite-PE cloud names like Bill.com (BILL) and CrowdStrike (CRWD). which push into shortable areas along moving average resistance at their respective 200-day lines. The 200-day moving averages then serve as references for upside stops.

The Market Direction Model (MDM) remains on a SELL signal.
This information is provided by MoKa Investors, LLC DBA Virtue of Selfish Investing (VoSI) is issued solely for informational purposes and does not constitute an offer to sell or a solicitation of an offer to buy securities. Information contained herein is based on sources which we believe to be reliable but is not guaranteed by us as being accurate and does not purport to be a complete statement or summary of available data. VoSI reports are intended to alert VoSI members to technical developments in certain securities that may or may not be actionable, only, and are not intended as recommendations. Past performance is not a guarantee, nor is it necessarily indicative, of future results. Opinions expressed herein are statements of our judgment as of the publication date and are subject to change without notice. Entities including but not limited to VoSI, its members, officers, directors, employees, customers, agents, and affiliates may have a position, long or short, in the securities referred to herein, and/or other related securities, and may increase or decrease such position or take a contra position. Additional information is available upon written request. This publication is for clients of Virtue of Selfish Investing. Reproduction without written permission is strictly prohibited and will be prosecuted to the full extent of the law. ©2022 MoKa Investors, LLC DBA Virtue of Selfish Investing. All rights reserved.
FOR OUR FREE MARKET LAB REPORT :