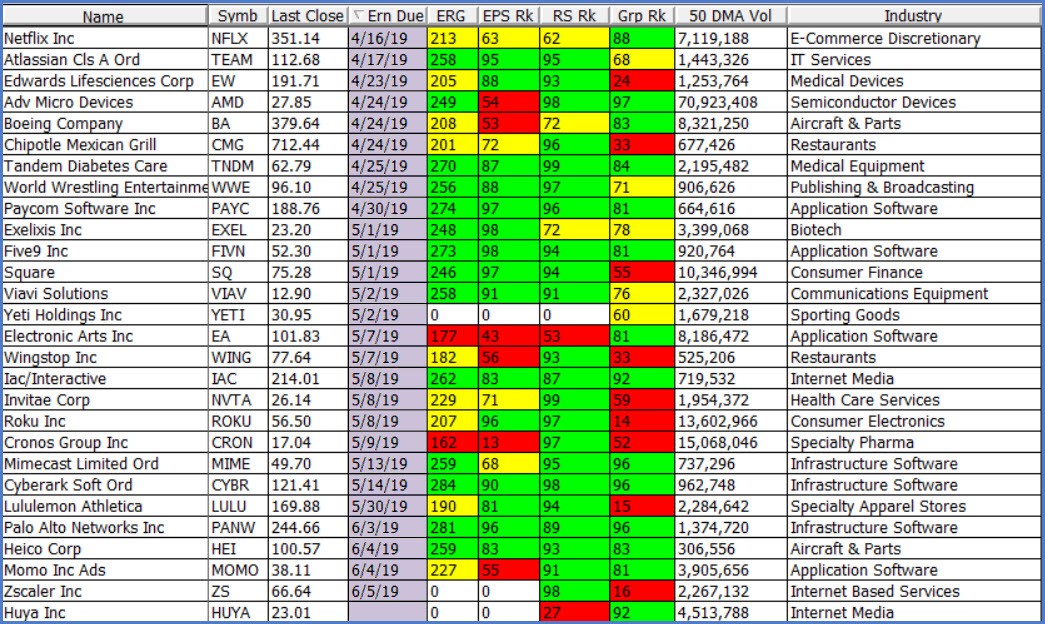 The VoSI Focus List is a compilation and reference list of stocks for which Pocket Pivot or Buyable Gap-Up Reports have been issued and which have been deemed suitable for inclusion on the Focus List. Not all stocks for which a Pocket Pivot or Buyable Gap-Up report has been issued will necessarily be added to the list. It is not intended as a "buy list" or a list of immediately actionable recommendations. Stocks on the list may or may not be in proper buy positions, and investors should exercise discretion and proper judgement in determining when and where stocks on the Focus List can be purchased. The following notes are intended to assist in this process. Please note that members can enlarge the Focus List image by clicking on the body of the email and then holding the Control Key while pressing the "+" key until it is large enough to read.
General Observations:
The general market rally continues, and so the Market Direction Model (MDM) remains on a buy signal. As we move into earnings season, however, it is generally not advisable to open new positions in stocks just before their next earnings report, unless one believes one can develop a meaningful profit cushion before the report. A profit cushion helps to insure against potentially big losses that can result when a stock gaps down big after earnings. However, one alternative is to take much smaller positions relative to overall portfolio size in a stock one has conviction in. So, for example, a 20% dive after earnings in a stock where one has a 5% position relative to their total account value would result in a 1% overall loss to your total account value. A 10% position size would result in 2% overall damage to your total account value, and so on.

A smaller position size relative to overall portfolio size can minimize the damage a large post-earnings gap-down would cause to one's total account value while allowing one to have at least a small head start in a stock that may have reasonable potential of gapping up after earnings. In such a case, one can then look to add on any potential buyable gap-up that occurs after earnings. Do the math, assess what a worst case scenario might look like, assess the potential for a bullish outcome after earnings, and then determine whether there is a tolerable level of risk in a) taking a position in a stock just ahead of an earnings report and b) holding that position through earnings even if one does not have a decent profit cushion in the position.

The list above is sorted by earliest earnings report date first, and the appropriate column is highlighted in purple. Please remember to double-check expected earnings report dates against several sources, including, most importantly, the company's own website. Most companies publish a press release indicating their precise earnings date.

Removed from the List this Week: Cronos (CRON) and Huya (HUYA).

Mimecast Limited (MIME) broke out two weeks ago, but that breakout failed very quickly. The stock burst below its 50-dma this past Monday, but on Tuesday recovered to post a U&R long entry back up through the prior 44.71 low in the pattern. That U&R long set-up led to a big-volume re-breakout move back up to the prior breakout levels seen last week. Re-breakouts following a prior failed breakout are a common occurrence in this market, which adds to the difficult nature of the environment. However, U&R long entries are often the best spots to buy into such a decline given the potential for such action to occur in this market.

World Wrestling Entertainment (WWE) broke out of its base on Wednesday, but we had already reported on the stock as a buy along the 5-dma over two weeks ago. At that time the stock was showing several pocket pivots along the 50-dma, and these have now resulted in a new-high breakout. Note that WWE is expected to report earnings next week.

Palo Alto Networks (PANW) is building a very tight base that is six-weeks in duration so far. The base is sitting right on top of a prior, large cup formation and recently found support at the 10-week moving average. Note that weekly volume has been drying up nicely as the base has been formed. Pullbacks from current levels into the 20-dema or deeper into the 50-dma and/or 10-wma may offer lower-risk entries. PANW is not expected to report earnings until early June.

ZScaler (ZS) posted a U&R long entry through the prior 63.50 low of March 25th on Tuesday. The stock was hit by heavy selling volume off the peak last week, but has since recovered. The sell-off lasted all of one day, and was another example of how a big-volume break on heavy volume can eventually resolve with a U&R long entry as the stock recovers. It may be buyable here along the 20-dma if it can consolidate tightly along the line as volume continues to dry up. ZS is not expected to report earnings until early June.

Roku (ROKU) has cleanly violated its 50-dma and appears set for a test of its 200-dma. The stock was a sell four weeks ago when it first broke below the 10-dma based on the Seven-Week Rule. The ensuing rally back up near the prior highs offered anyone still holding the stock a second exit opportunity. For now, we are still watching ROKU on our list since we first reported on the stock when it was trading around 39 on an early January buyable gap-up. In addition, we discussed the stock as an Ugly Duckling type of long set-up in our live webinars when it was trading around 29-30 less than two weeks before the early January BGU. ROKU is expected to report earnings in early May, and for now is not considered a buyable situation.