While some may try and spin the current market environment as a confirmed uptrend the broader picture, at least from an index standpoint, has more of the appearance of a wide, volatile downtrend channel as seen in the chart of the NASDAQ Composite Index. The market correction which began at the start of the New Year has seen many leading groups among higher-PE tech and growth names break down significantly. At the same time, a stealth bull market has been seen in stuff stocks, represented by shares of metals, miners, oils, coals, agriculturals, and other commodity-related and inflation-related stocks. Thus, this market is much more complicated than the simple-minded application of labels such as confirmed rally or market in correction would imply. 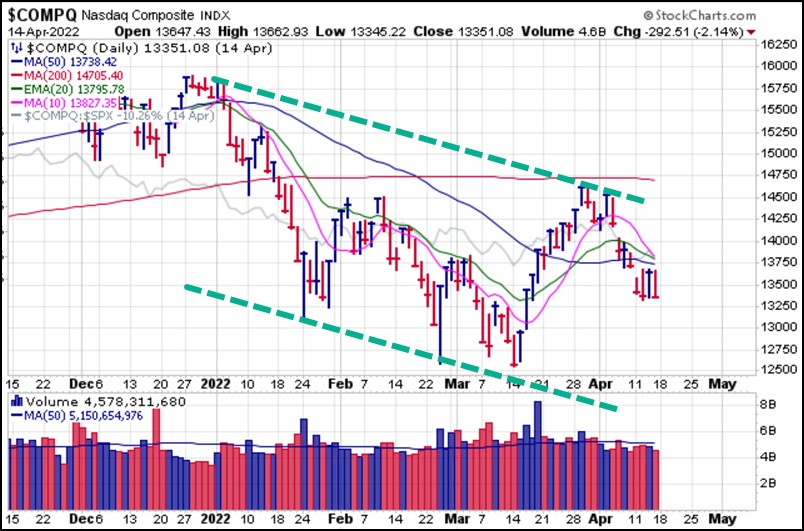 While the Fed has paid much lip service to the idea of raising interest rates and trimming its balance sheet, the fact is that market rates have already beaten the Fed to the punch as inflation becomes more than obvious to market participants. So far, the Fed has raised the Fed Funds Rate target all of 25-basis points while merely decreasing, not eliminating, its monthly QE bond purchases. In the process, the extreme paradox of record Year-over-Year PPI and 40-year highs in CPI against the backdrop of continued bond purchases and a .25% Fed Funds Rates persists. Meanwhile, the 10-Year Treasury Yield ($TNX) syncs up with reality as it moves to its highest levels since December 2018, ending the week at 2.828%.

Rising interest rates, whether instigated by the Fed or the market, are a significant negative for higher-PE names. This is why we see big-stock NASDAQ names coming under continued pressure, with names like Alphabet (GOOG) and Microsoft (MSFT) breaking lower as they appear set for a test of their March lows while others begin to break major moving average support, such as Apple (AAPL) and Amazon.com (AMZN). Both stocks triggered short-sale entries as they broke below their 50-day moving averages on Thursday, the final trading of the trading week, where the 50-day lines would now serve as covering guides. As rates continue to rise, we expect that higher-PE, and in particular infinite-PE names will come under selling pressure, oversold bear market rallies notwithstanding. 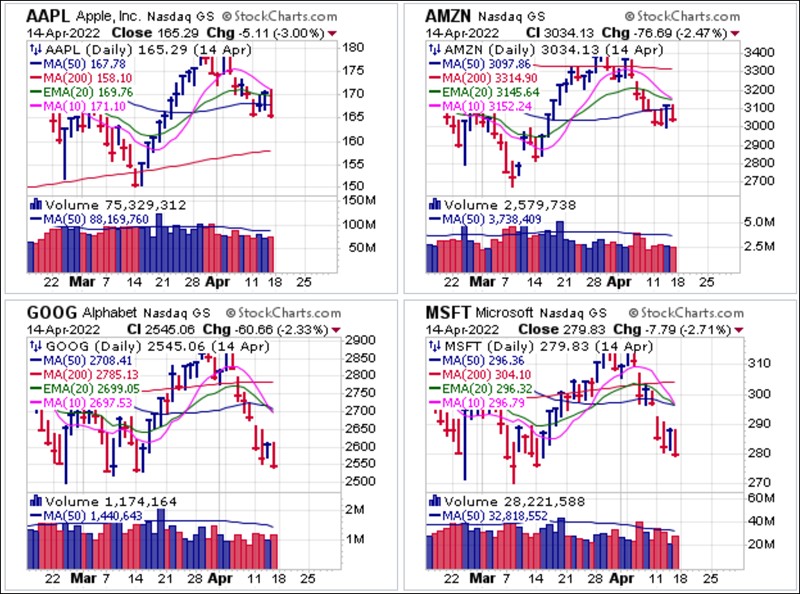 Rising interest rates are met by the paradox of declining financials, which are typically considered to be beneficiaries of higher interest rates. Below we see several big-stock financials that reported earnings this past week breaking to lower lows. Note that of the six stocks shown below, J.P. Morgan (JPM), Goldman Sachs (GS), and Morgan Stanley (MS), all triggered short-sale entries along their 20-day exponential moving averages. JPM did so on Tuesday, before it reported earnings Wednesday morning, while GS and MS did so on Thursday after they reported earnings on Thursday morning. Clearly, something is amiss as other factors weigh more heavily on the financials than the prospect of "favorably" higher interest rates.

Earnings season moves to the forefront this week with Netflix (NFLX) reporting on Tuesday after the close and Tesla (TSLA) after the close on Wednesday. We will also see a number of leading industrial metals names, such as aluminum producer Alcoa (AA), copper producer Freeport-McMoRan (FCX), iron ore producer Cleveland Cliffs (CLF), gold miner Newmont Corp. (NEM), and steel producers Nucor Corp. (NUE) and Steel Dynamics (STLD) report later in the week. This will give investors some idea of how much earnings leverage these companies are gaining from higher commodity prices.

We will also see railroads CSX Corp. (CSX) report on Wednesday after the close and Union Pacific (UNP) report on Thursday before the open. Rails were slammed along with other transportation-related names after the Bureau of Labor Statistics released its monthly jobs report in the first week of April, revealing that 1,000 jobs were lost in the transportation sector in March, not a good sign for the economy. CSX and UNP have since remained in short bear flags below their 50-day moving averages since splitting wide open in early April. Their earnings reports this week will likely offer some insight into what the sharp March decline in transportation-related jobs was all about.

We have reported on several metals-related names in the past two weeks as they flashed pocket pivots (green arrows), including uraniums Cameco (CCJ) and Energy Fuels (UUUU), silver producer First Majestic Silver (AG) which is now also producing gold after a recent mine acquisition, silver producer Compania Mina Buenaventura (BVN), and gold producer Barrick Gold (GOLD). These names have continued to hold up well even as the major market indexes failed on double-top breakouts in early April. 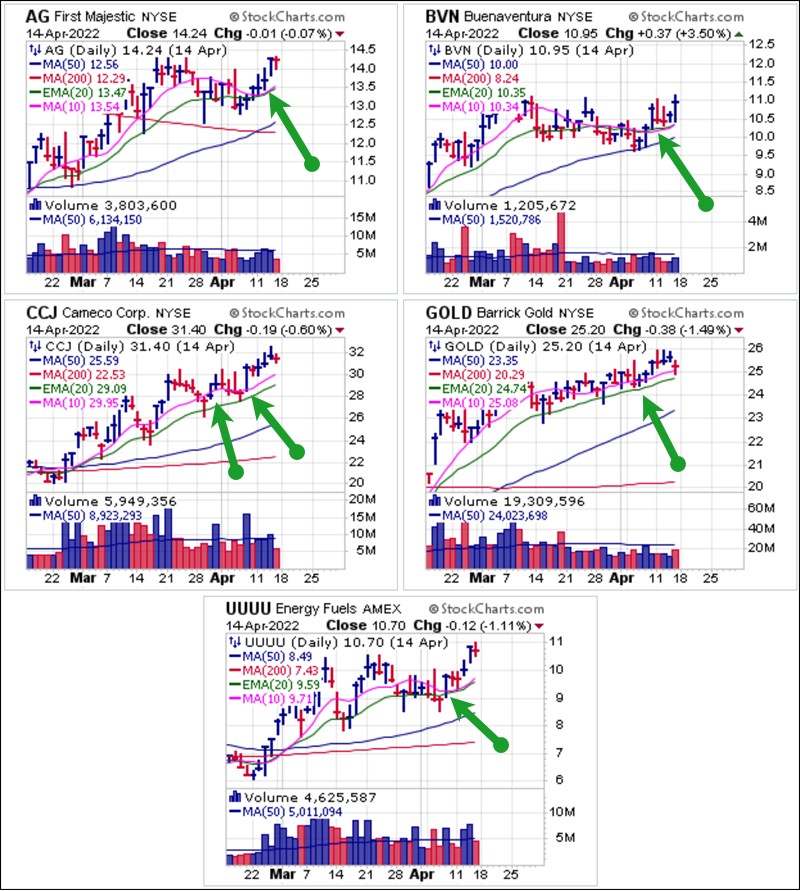 The limitations of solar and wind turbines make it plain that if indeed those who claim to be concerned wish to limit carbon emissions then nuclear power is the most efficient choice. Thus, uranium names may have more upside going forward, although it is unclear how a new leg down in the major market averages would affect these names. If the general market begins to break to lower lows, it is always possible that these leading stuff stocks, as we call them, would be dragged down but would likely form new bases with typical corrections of 15-30% during a bear market. Longer-term, we believe these names have further upside potential within the right market context. The weekly charts of Cameco (CCJ) and Energy Fuels (UUUU) show recent breakouts that indicate these stocks want to go higher, the onset of bear market conditions notwithstanding.

We remain cautious on the general market, but while certain leading names have been playable on the long side we emphasize the need for alert and precise risk-management. This market is often difficult to get a handle on, with seemingly contradictory movements in either direction. Case in point would be the higher-volume outside reversals to the downside that we saw on Tuesday in both the NASDAQ and S&P 500 which looked quite bearish, but only led to sharp rallies Wednesday, which in turn led to sell-offs on Friday.
The Market Direction Model (MDM) remains on a SELL signal.