The VoSI Focus List is a compilation and reference list of stocks for which Pocket Pivot or Buyable Gap-Up Reports have been issued and which have been deemed suitable for inclusion on the Focus List. Not all stocks for which a Pocket Pivot or Buyable Gap-Up report has been issued will necessarily be added to the list. It is not intended as a "buy list" or a list of immediately actionable recommendations. Stocks on the list may or may not be in proper buy positions, and investors should exercise discretion and proper judgement in determining when and where stocks on the Focus List can be purchased. The following notes are intended to assist in this process. Please note that members can enlarge the Focus List image by clicking on the body of the email and then holding the Control Key while pressing the "+" key until it is large enough to read.
General Observations:
Major market indexes were suddenly whacked on Thursday after the Biden Administration laid out its proposal to raise taxes, including raising the capital gains tax as high as 43.4%. That sent stocks reeling, but after the obvious assessment that such a proposal is not likely to pass Congress in its current form, stocks rallied on Friday as volume declined. The action capped off a wild, volatile week as the market and individual stocks remain mostly trendless. We continue to find nothing that we believe qualifies for inclusion on The Focus List, and this may be telling us something about this market beyond the current index action, which overall appears benign. 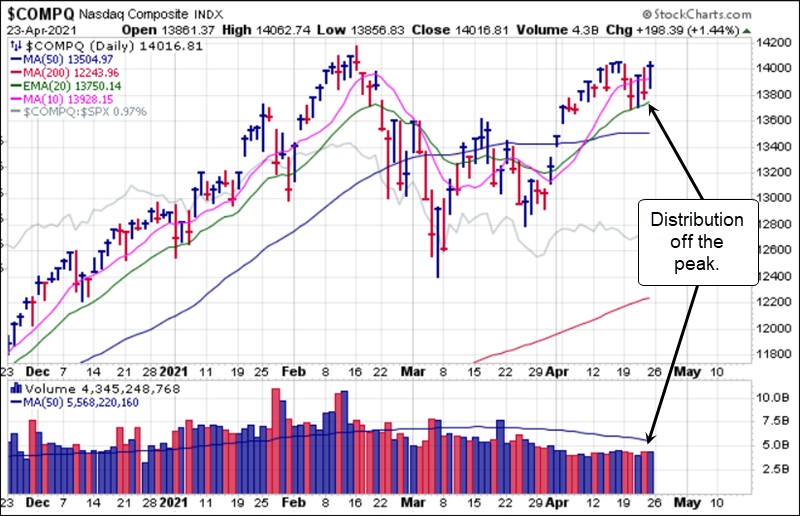 Interest rates remain at elevated levels and are currently consolidating sharp gains achieved in the first quarter of 2021. The10-Year Treasury Yield ended the week at 1.58% but appears to be consolidating normally without a severe breakdown evident as of yet.

The Market Direction Model (MDM) remains on a BUY signal.
Notable Action:
Bitcoin has broken down over the past six trading days since failing on its recent breakout. To some extent, we must admit that this does not surprise us given the hype and crowd attention on Bitcoin in expectation of an impending move to $100,000. Generally, what the "crowd knows" is wrong, and in this case that was proven out. The whales are always seeking to disrupt profits after which they can then scoop Bitcoin at lower prices after FUD has taken its toll.
The pullback in Bitcoin may offer entry opportunities if and when it can find a solid low. Numerous on- and off-chain metrics suggest we are roughly half way through the bull run so odds greatly favor Bitcoin heading back to new highs as S2F and other metrics point to a price of at least $280,000 in the months ahead, perhaps by the end of the year, before this bull market ends.
That said, price always rules the day no matter how bullish the metrics appear. Bitcoin typically has multiple sharp corrections exceeding 25-30% during bull markets. The current correction in Bitcoin peak-to-trough is at -26.8%.
Price formations show the only thing we have to go on currently is the idea of testing OWL long set-ups as it pulls back and begins testing key lows in the chart. On Friday, $BTCUSD undercut the prior late March low at $50,406 and rallied above it for a typical U&R attempt, but over the weekend as we write that U&R is failing. 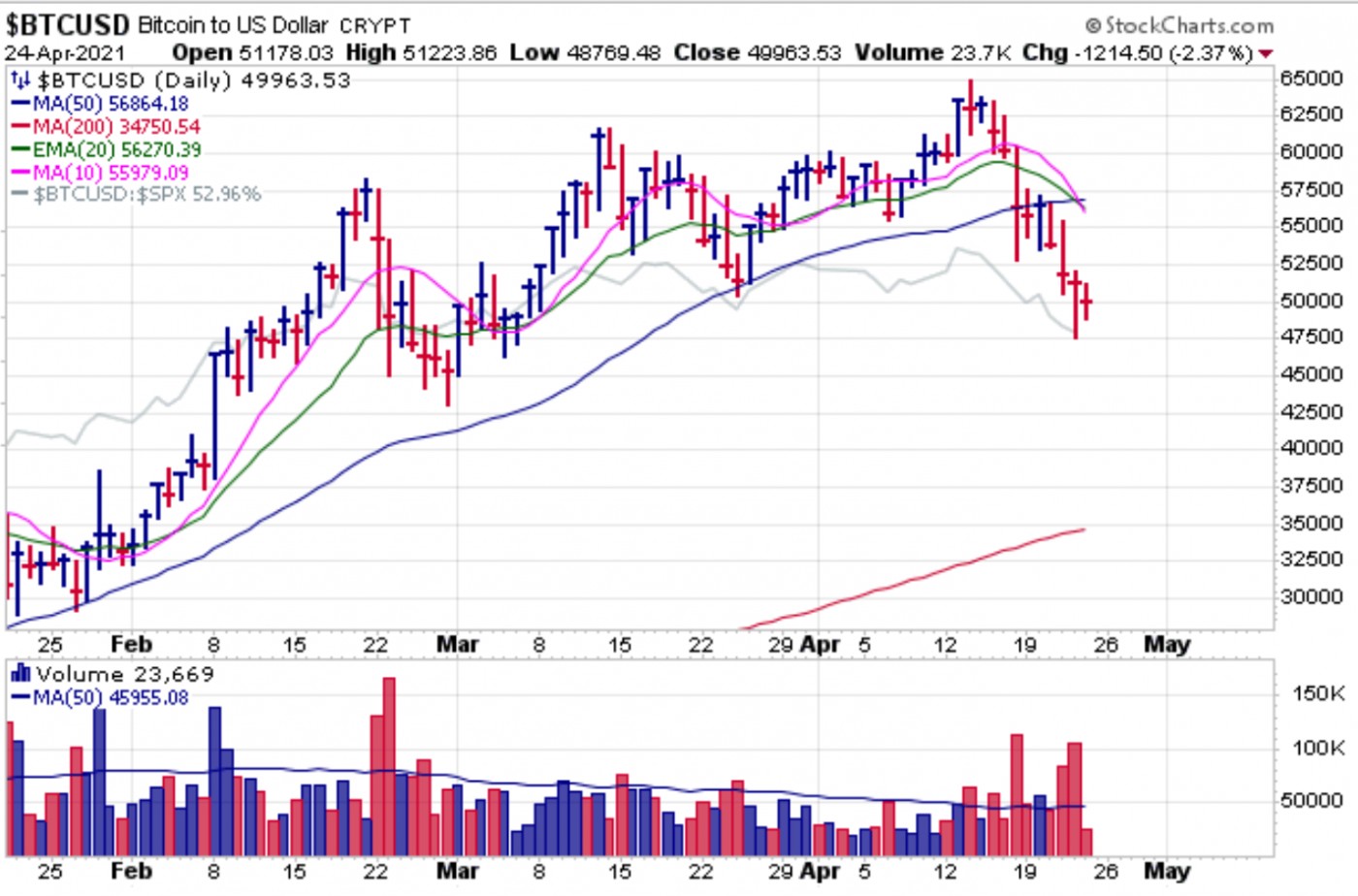 This will likely determine whether the U&R observed in the Grayscale Bitcoin Trust (GBTC) on Friday holds up. 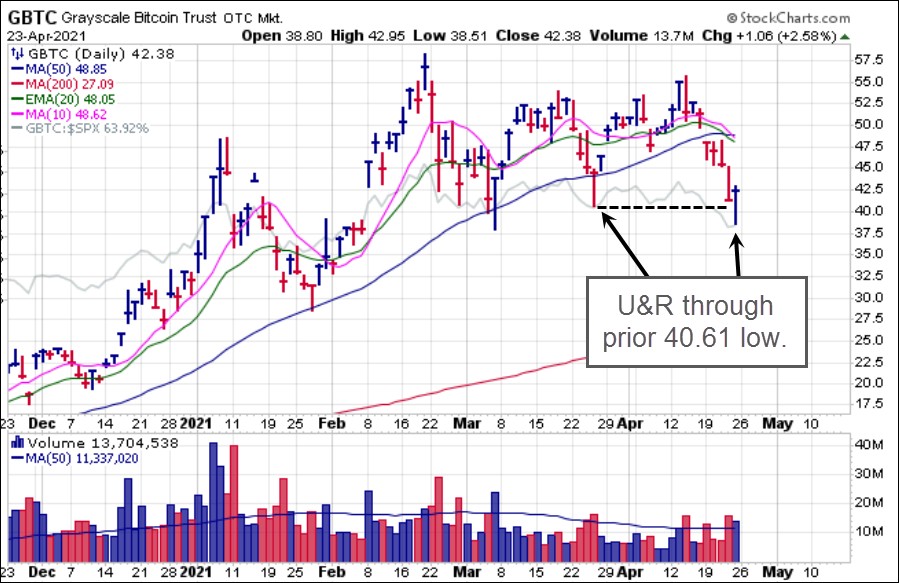 Marathon Digital Holdings (MARA) posted a U&R through its prior 29.57 low on Friday, but as with GBTC this may not hold up if Bitcoin continues lower over the weekend or next week. 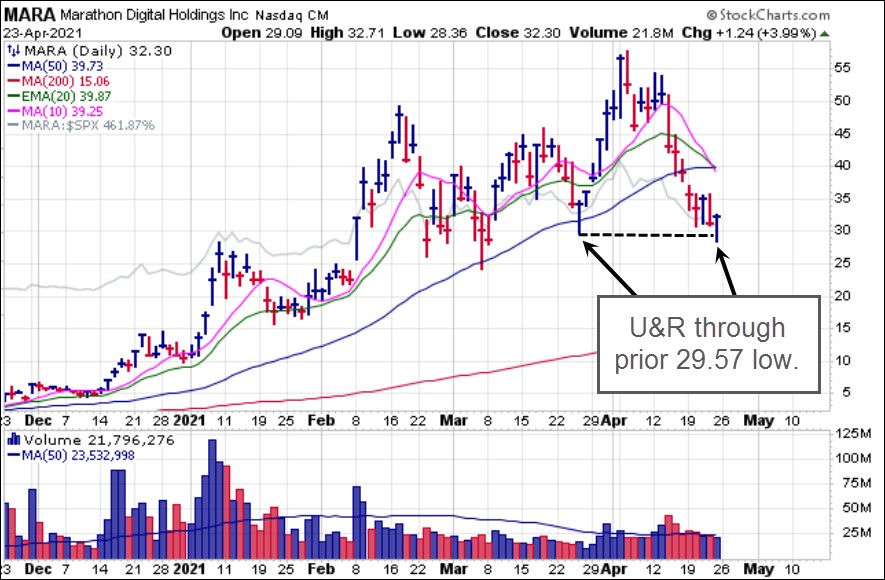 The same would apply to Riot Blockchain (RIOT) which also posted a U&R move through its prior 34.25 low. The situation with Bitcoin and crypto-related stocks remains quite fluid, and we would not assume anything with respect to where they are all headed from here. Perhaps a severe correction in Bitcoin is necessary to wash out all the speculative certainty about an immediate move to $100,000 that has been bubbling out there over the past few weeks. 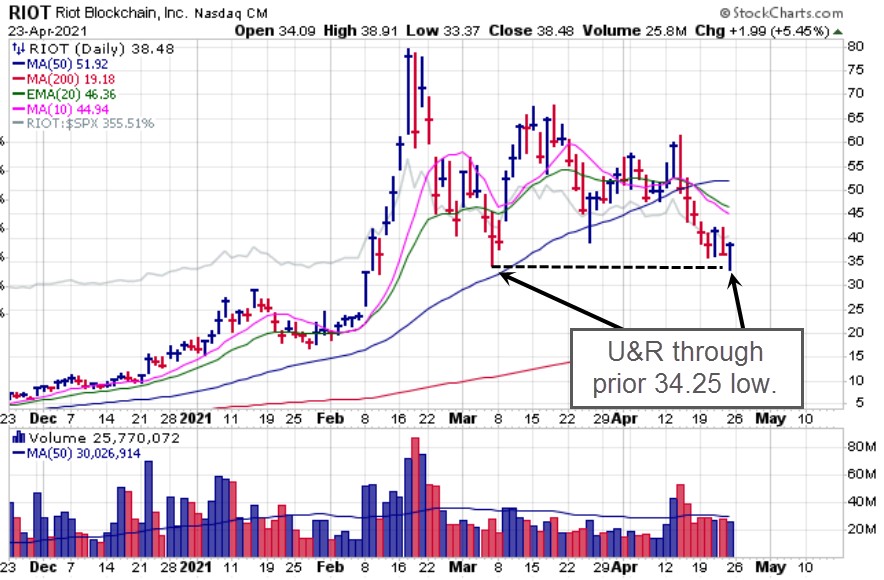 Precious metals, as alternative-currencies, have been able to trend higher off their lows of three weeks ago when we first identified U&R long set-ups in both gold and silver at that time. The Sprott Physical Gold Trust (PHYS) has trended higher since posting a pocket pivot at its 50-day moving average earlier in the week, and would only offer lower-risk entries at its 10-day moving average as it crosses above the 50-day line. 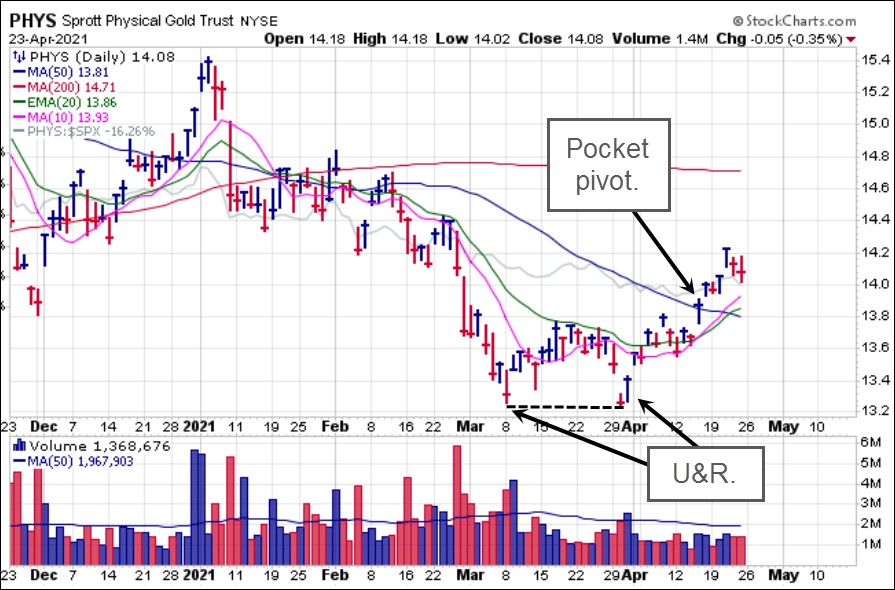 The Sprott Physical Silver Trust (PSLV) has also continued to trend higher following its own U&R long entry off the lows of three weeks ago. It held support at its 10-day line on Friday as it flirts with its 50-day moving average. We like pullbacks to the 10-day line as being more buyable as was the case on Friday, but we can now watch to see whether it is able to set up along the 50-day line. 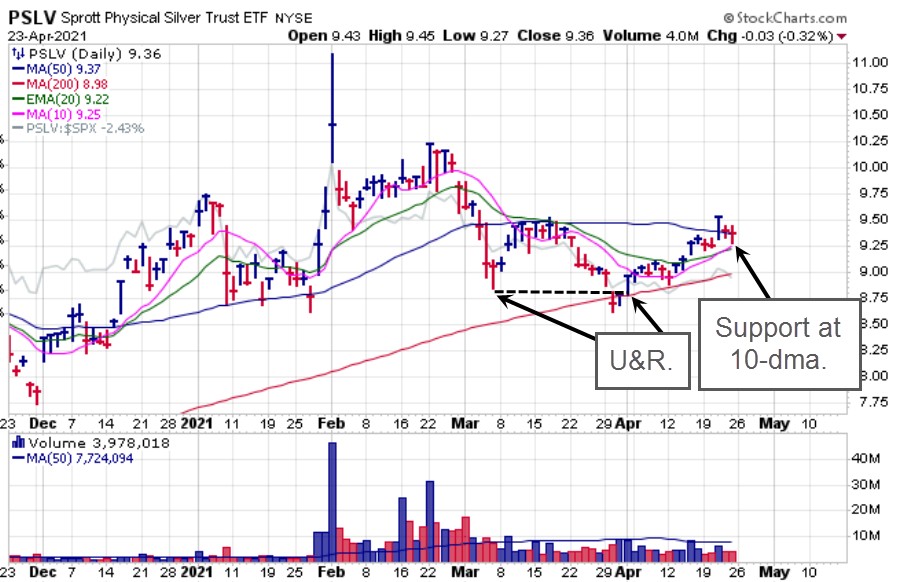 Back in August of last year, when gold and silver were going parabolic, Bitcoin was relatively quiet. After Bitcoin stole the show in late 2020 and into early 2021, the roles have reversed somewhat over the past three weeks. Whether this continues remains to be seen, but it is interesting to see that as Bitcoin takes a rest, perhaps a well-deserved rest, gold and silver begin to pick up the slack. While many want to engage in pointless arguments about Bitcoin vs. gold, we don’t view the two as mutually exclusive. As fiat currencies die and devalue, alternative-currencies, whatever they may be, remain viable places of refuge for those seeking to diversify away from the inevitable failure of fiat.