Major market indexes continue to edge higher as the 200-day moving average looms ever closer. Sentiment and the media narrative continue to build on the bullish side, with recent headlines proclaiming that the NASDAQ Composite has now exited a bear market and begun a new bull market based on a 20% rally off the June lows. In addition, the S&P 500 is being lauded for exceeding a 50% retracement off the June lows, something that, according to one analyst, it has never done in a bear market rally since 1950.
In our view this is a meaningless statistic since during the Summer 2000 bear market rally following the DotCom bubble market top in March 2000, the NASDAQ well exceeded a 50% retracement before collapsing to lower lows in the fall. To cite such statistics in an S&P-centric manner while ignoring the NASDAQ Composite's history of bear market retracements strikes us as a severe and ignorant case of guilt by omission.

As we've noted, bear market rallies are legion for getting the masses bulled up, and we have previously discussed that we would not be surprised by a bear market rally that carries the indexes into or just beyond their 200-day/40-week moving averages as was the case in the bear market rallies of Summer of 2000 and Spring/Summer of 2008. The question yet to be answered is whether this rally will end in late August/early September in the sharp and brutal manner that those 2000 and 2008 bear market rallies did.
In the chart of the NASDAQ Composite ($COMPQ), Dow Jones Industrial ($INDU), and S&P 500 ($SPX) Indexes below the 200-day moving average is just barely showing up on the Dow chart. Thus, the indexes may have more room to rise as we head into the end of summer. The NASDAQ's 200-day line is at 13509.57 vs. a close this past week of 13047.19 while the S&P's 200-day lies at 4328.89 vs. a Friday close of 4280.15. 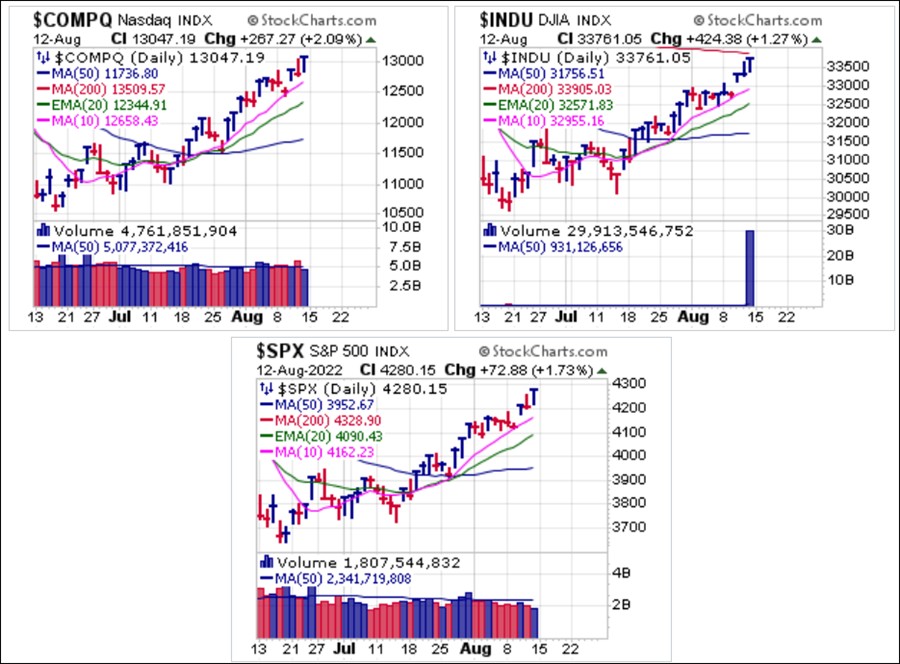 The idea of a Fed pivot, whereby the Fed will achieve an ignominious crash-landing of such severity that they will soon be forced to reverse course and begin aggressively back-tracking on rates and balance-sheet tapering. This is occurring while record inflation is in force, even much higher than the comparisons that are made between 8-9% inflation today and 8-9% inflation in 1980 when then Fed Chairman Paul Volcker raised interest rates beyond 20%.
It is critical to understand that if inflation today were measured the same way it was measured in 1980, then we have seen peak inflation in 2022 of 17.3% even as the Fed Funds Rate climbs to 2.25-2.50%. This underscores the bizarre and unique underlying conditions currently faced by the market, and which can create unintended consequences that, in their worst case, become Black Swans.
Currently, a Treasury Yield Curve inversion is forecasting a recession. The 10-Year Treasury Yield is currently at 2.84% and above the allegedly critical 2.80% level although well off its 3.49% high of mid-June. That the yield fell since June suggests the market thinks Powell may pivot sooner than later by halting hikes given that inflation came in 0.2% under expectations across the board for both CPI and core CPI, but the CPI still remains at levels well above the Fed's target rate of 2%. Thus CME Fed Futures is still pricing in 50 bps rate hikes in September and November then a 25 bps rate hike in December to bring the FFR to 325-350. Major stock market averages should start into a major downtrend should this happen, pushing Powell to replay what happened in Dec-2018 when we had the first xmas crash on record. Powell then immediately told the markets he would stop tightening the balance sheet. That was the major low for both stock and crypto markets. Given that major averages now have "cushion" having rallied since June, Powell now has room to hike until the majors retest and plumb new lows. Markets may allow him to hike two more times before they capitulate but given the record levels of debt, it is unlikely they will allow a third hike to 325-350 as delinquencies are moving higher once again so could accelerate. Once rate reach 325-350, this could create serious issues for debtors. Stay tuned. 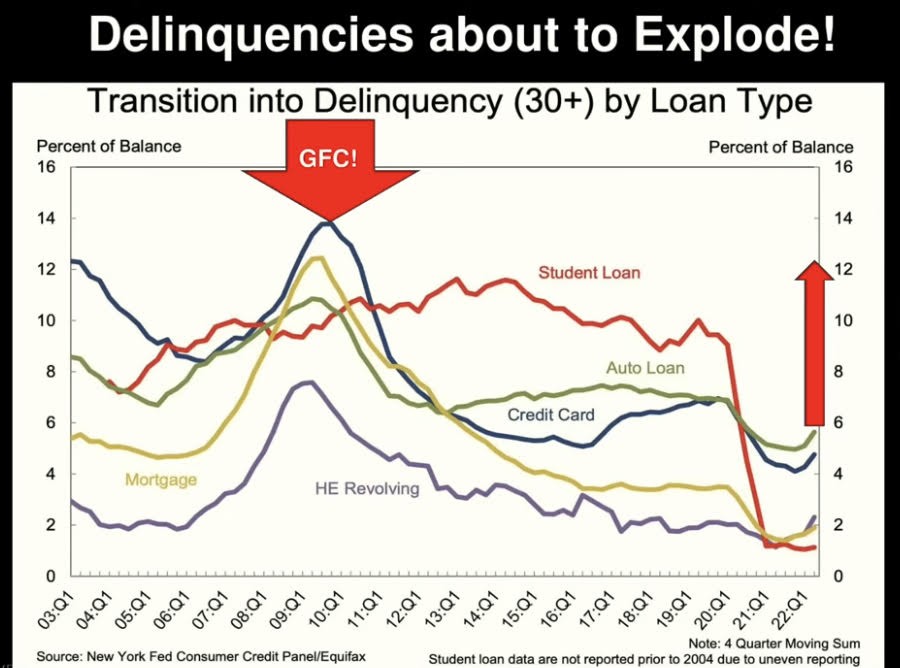 Meanwhile, the Five-Year Treasury Yield sits at a higher 2.97%.

While the Two-Year Treasury Yield is approaching much closer to its June highs than the 10-year or the 5-year, finishing this past week at 3.25%.

Semiconductors have been rallying sharply off the lows as the VanEck Vectors Semiconductor ETF (SMH) posted its 5th straight up week since the June lows. Viewed within the context of a weekly chart and the prior downside move, the current rally looks like a typical bear market rally for the semiconductor sector. In fact, nearly all semiconductors names, with the exception of names like Intel (INTC) closely resemble the SMH chart. Note the lower volume over the past six weeks relative to the selling volume seen on the way down. 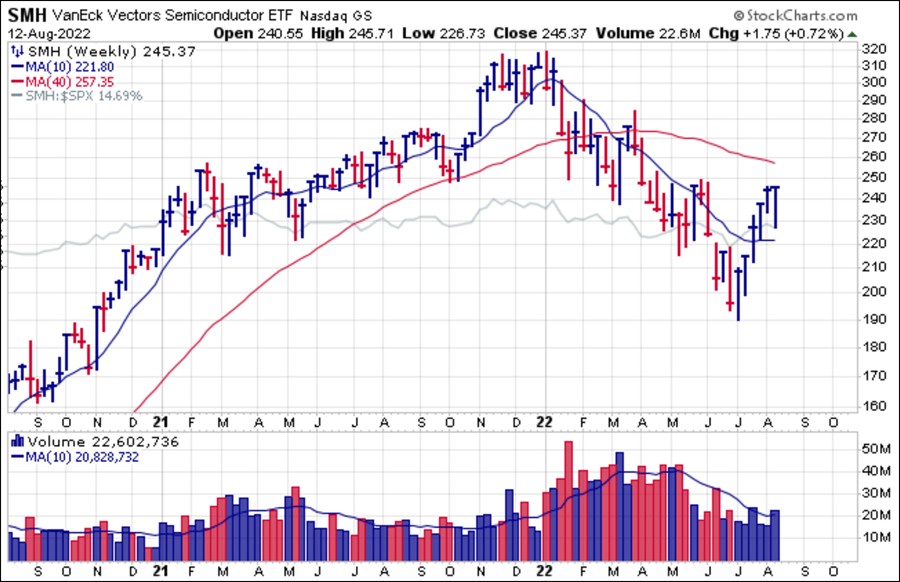 Most higher-PE tech and growth names, even infinite-PE names, have participated in the melt-up off the June lows. Apple (AAPL) carries a valuation that is perhaps less extreme, so it finds favor in a low-volume melt-up rally that is approaching the prior market top highs. 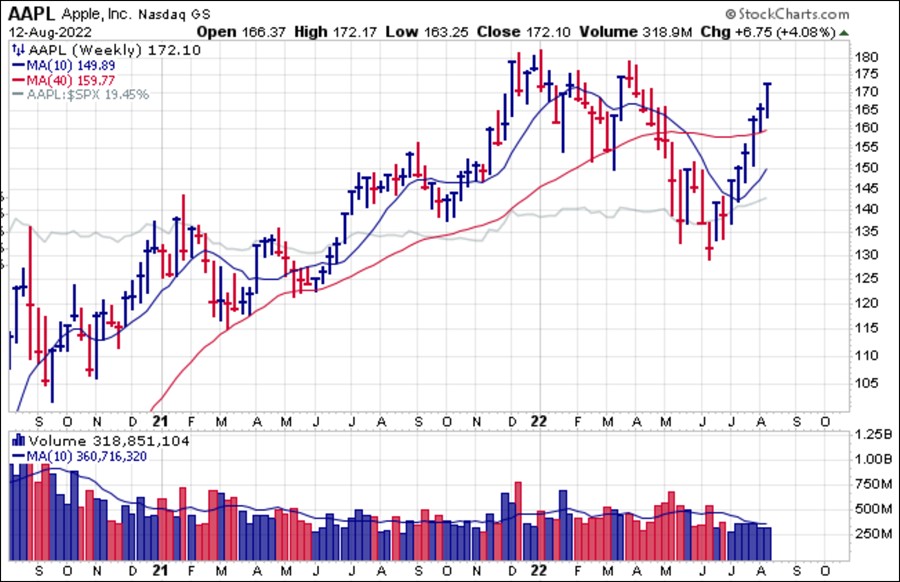 Solar and other clean energy names have benefitted recently when sudden upside in the space was sparked by renegade Democrat Senator Joe Manchin who did an about-face three weeks ago and declared that he would support the latest "Inflation Reduction Act" legislation which provides for $369 billion in pork-barrel spending target at the clean energy industry. Solars have rallied sharply off otherwise moribund patterns as the Invesco Solar ETF (TAN) illustrates. 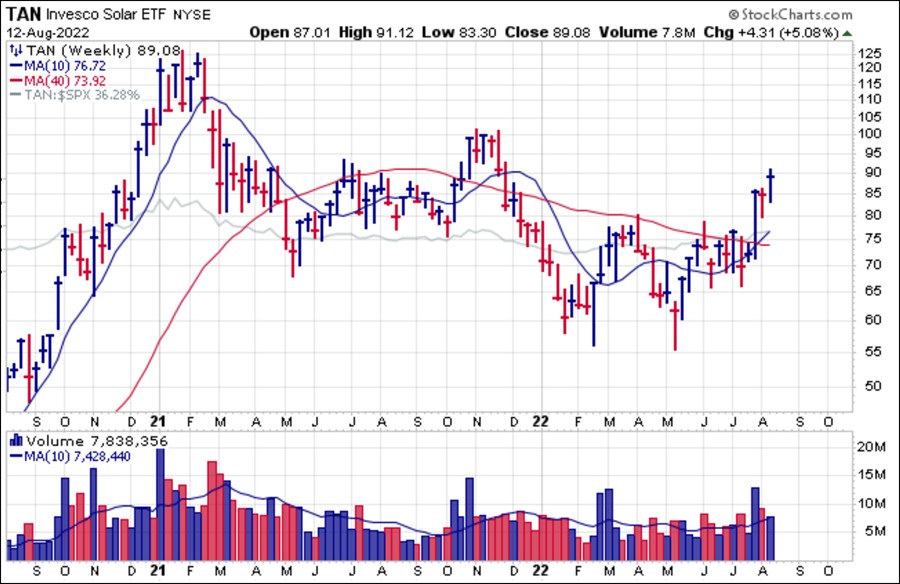 Most of the moves in solar names have been confined to the lower reaches of their current chart patterns, but First Solar (FSLR) has gone nuts on the upside in a four-week rally that has carried the stock all the way back to its all-time highs seen before the market top in late 2021 and early 2022. This has the look of a classic punchbowl formation where the stock was more than cut in half in 16 weeks to the downside off the late October peak and has now made up nearly all of those losses in just four weeks. One could argue that FSLR has become a new meme stock of sorts.
Our view is that this move is likely to prove unsustainable as it potentially and eventually evolves into a possible Punchbowl of Death formation. However, we will wait for the first pullback and consolidation to occur before drawing any firm conclusions. A Punchbowl of Death (POD) short-sale set-up must first see the stock fail at its 10-dma and 20-dema, which has not occurred yet. It could also top and trigger a short-sale entry on any double-top failure at the November 1, 2021 left-side peak at 123.13. If this does play out as a possible POD short-sale set-up, we will issue a Short-Sale Set-Up (SSS) report as appropriate. 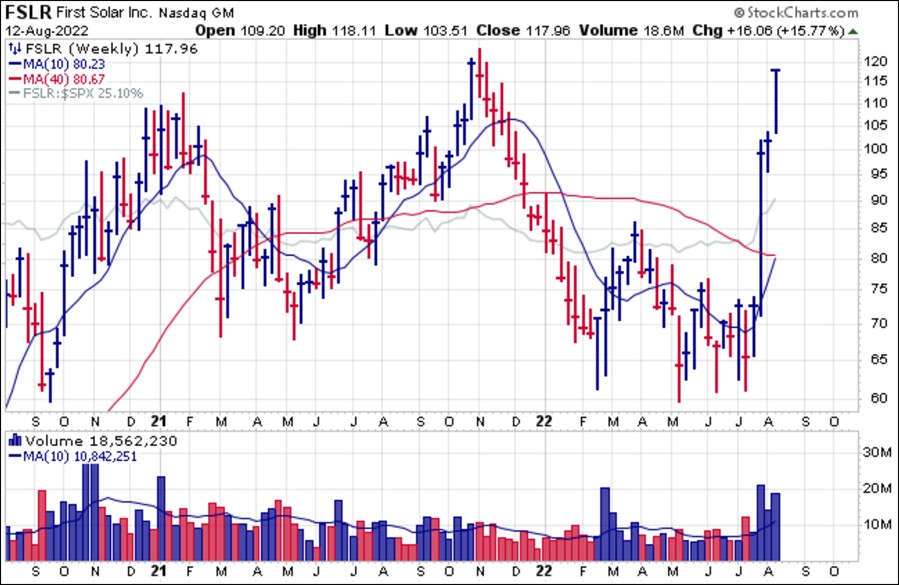 The Market Direction Model (MDM) remains on a SELL signal.
This information is provided by MoKa Investors, LLC DBA Virtue of Selfish Investing (VoSI) is issued solely for informational purposes and does not constitute an offer to sell or a solicitation of an offer to buy securities. Information contained herein is based on sources which we believe to be reliable but is not guaranteed by us as being accurate and does not purport to be a complete statement or summary of available data. VoSI reports are intended to alert VoSI members to technical developments in certain securities that may or may not be actionable, only, and are not intended as recommendations. Past performance is not a guarantee, nor is it necessarily indicative, of future results. Opinions expressed herein are statements of our judgment as of the publication date and are subject to change without notice. Entities including but not limited to VoSI, its members, officers, directors, employees, customers, agents, and affiliates may have a position, long or short, in the securities referred to herein, and/or other related securities, and may increase or decrease such position or take a contra position. Additional information is available upon written request. This publication is for clients of Virtue of Selfish Investing. Reproduction without written permission is strictly prohibited and will be prosecuted to the full extent of the law. ©2022 MoKa Investors, LLC DBA Virtue of Selfish Investing. All rights reserved.
FOR OUR FREE MARKET LAB REPORT :