The S&P 500 and Dow Indexes both posted all-time highs on Friday in tight churning up days as volume declined 8% vs. the prior day. The NASDAQ Composite remains near its prior highs and also churned around on Friday on slightly higher volume vs. the prior day. Small-caps remain laggards as the "risk-on" index, the Russell 2000, represented by its proxy the iShares Russell 2000 ETF (IWM), has been unable to regain its 50-day moving average. The Market Direction Model (MDM) remains on a BUY signal. 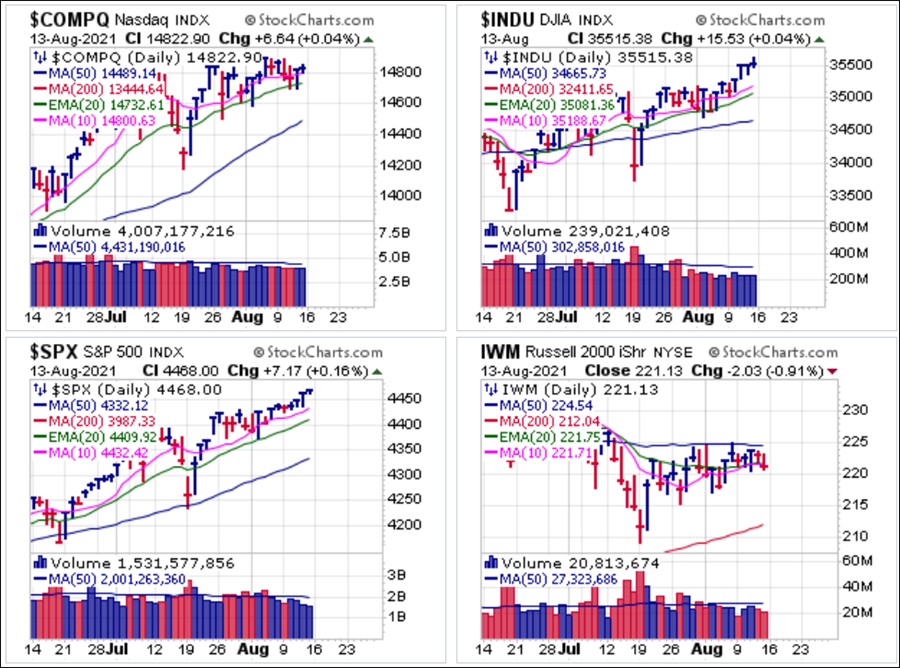 Overall, the action remains bifurcated among individual stocks and groups. This week, key semiconductor leaders broke down sharply, gathering momentum after Morgan Stanley (MS) analysts downgraded memory chip makers, warning that "winter is coming" for this segment of the industry. This set up some tactical short-sale entry triggers in names like Applied Materials (AMAT), Lam Research (LRCX), Micron Technology (MU) and Western Digital (WDC) as they broke below near-term support at their 10-day, 20-day, 50-day, or, as in the case of MU, 200-day lines. 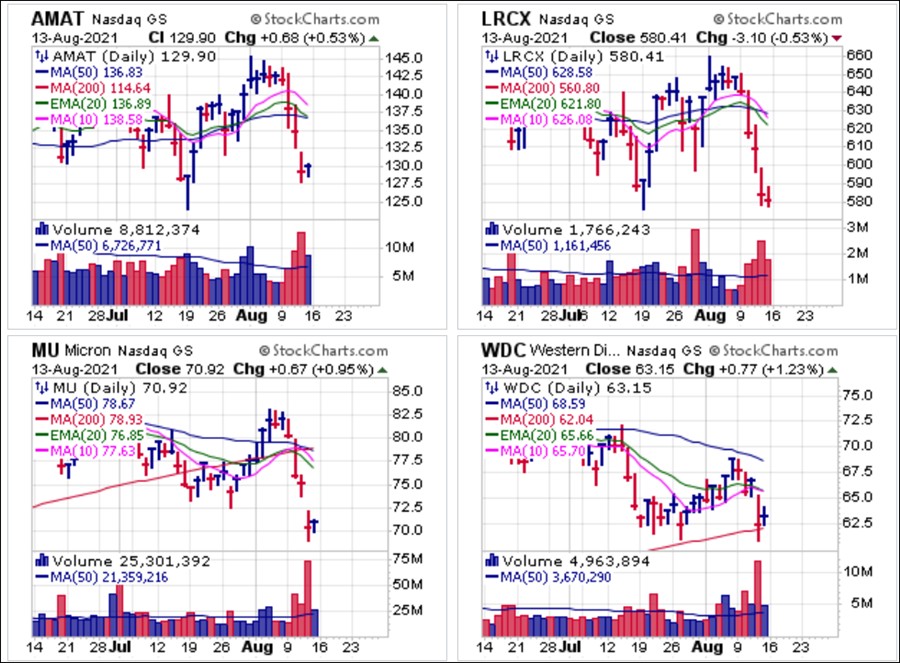 Meanwhile, the percentage of NASDAQ stocks trading above their 50-day moving averages remains at bear market/correction levels despite new highs in the major market indexes.

As NASDAQ breadth continues to deteriorate.

Improvement is being seen in the percentage of stocks on the NYSE trading above their 50-day moving averages, however, but it still remains muted in the face of all-time highs in the Dow and S&P 500 on Friday.

NYSE breadth is also looking much better than its NASDAQ counterpart, but has not confirmed new highs in the Dow and S&P 500 Indexes.

Technology/growth names lagged slightly this week while materials and industrials, essentially "stuff stocks" moved higher on the two-pronged news goose. The first one was news of a new infrastructure spending bill wending its way through Congress. 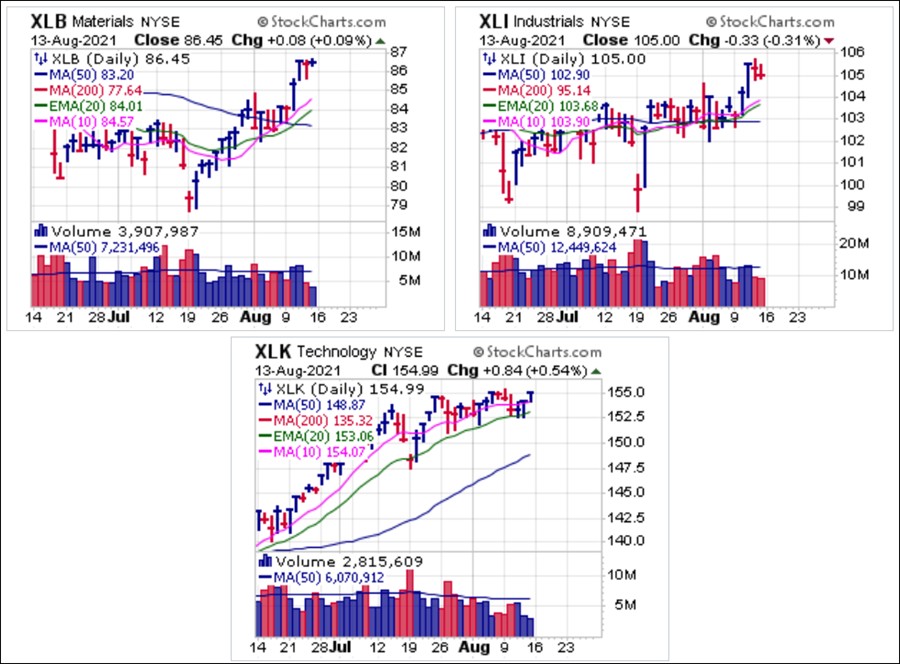 The second was the re-emergence of the re-inflation trade as the 10-year and 30-year Treasury Yields have rallied over the past two trading weeks until reversing and retracing some of that on Friday in moves that took the 10-year back below its 200-dma to end the week at 1.297% The 30-year (not shown) ran into resistance at its 50-dma and 200-dma and rolled lower on Friday to end the week at 1.948%

Precious metals were hit with heavy selling last Sunday night as one or more large sellers hit the futures during the thin Sunday afternoon session with a whopping 24,000 contracts in what looked like indiscriminate selling. Gold futures hit a session low at 1677 support after triggering stops at the 1750 level early in the afternoon/evening. Gold futures finished the week at 1778.20 in a massive shakeout that also played out as an undercut & rally entry at $1750 an ounce. 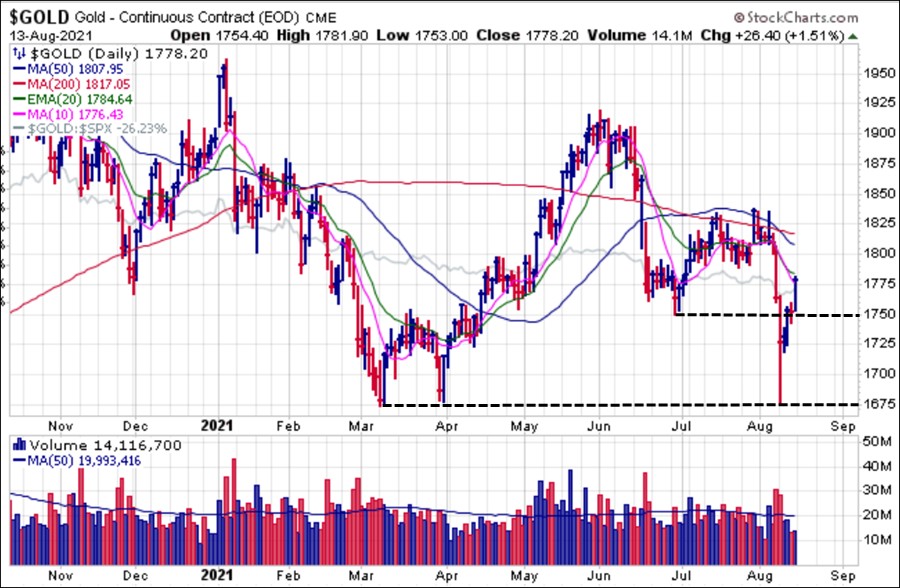 This would correspond to the July 29th low of 13.89 in the Sprott Physical Gold Trust (PHYS). The action in precious metals has been volatile, however, and mostly trendless as both gold and silver move in wide sideways ranges extending back to the August 2020 peak in both. 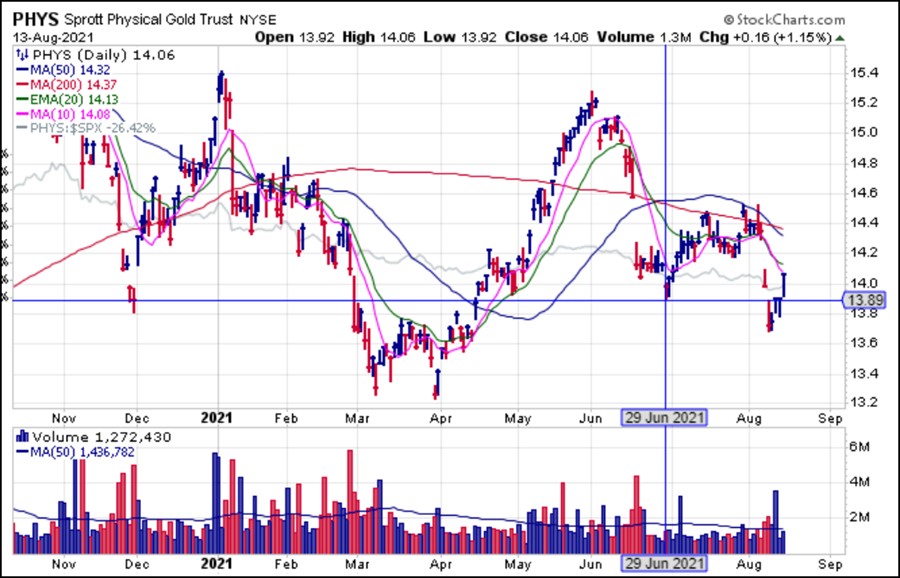 This has remained a bifurcated, rotational market where individual groups both lose and regain favor in the market as leaders rotate into laggards and laggards rotate back into leaders, as we've seen with industrial metals and other stuff stocks this past week. A great deal of volatility and rotation is the result of the ongoing question regarding when or even whether the Fed will begin to taper. But as the Fed stands pat in real-time, individual stocks may pass the leadership baton back and forth like a hot potato, but major market indexes simply continue to melt higher. The least complicated way for trend-followers to play this market has been in a general way, riding the consistent uptrends in the major market indexes via ETFs that Dr. K discusses in the Market Direction Direction Model (MDM) reports. For now, the model remains on a buy signal which it switched to on July 28th after a brief switch to a neutral signal on July 15th, several days ahead of the severe July19th market break. Otherwise, this remains a market mostly suited to nimble swing-traders and day-traders. Stay tuned.