Major market indexes mostly continue to grind higher as they move to the highs of a downward trend channel extending back to the late December peak. We still would not be surprised to see the indexes push as high as their 200-day moving averages as was seen in the last two severe bear market phases during the Summer of 2000 and the Spring/Summer of 2008. The rally has been driven by a perception that the Fed will soon pivot back towards easy money policy once they crash-land the economy, but so far no concrete evidence of this has been forthcoming. A strong jobs number on Friday of 528,000 new jobs vs. expectations of 250,000 keeps the Fed on track with CME Fed Futures now predicting a greater chance of a 75 basis point rate increase vs. 50 basis points when the Fed next meets in September. 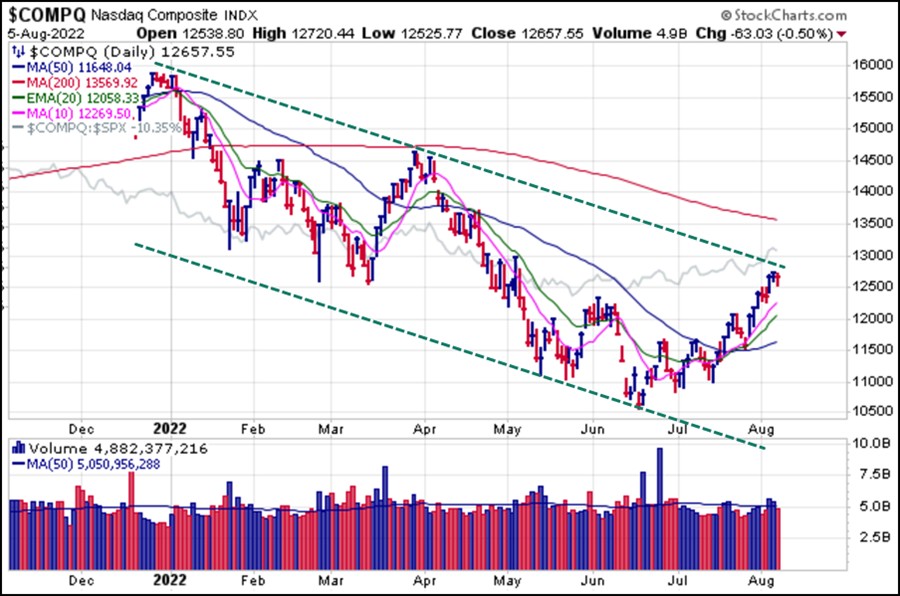 While some claim that the market is in a "confirmed rally" the fact remains that leading stocks forming constructive bases within 10-15% of their 52-week highs are nearly non-existent. Most beaten-down former leaders are simply staging logical oversold rallies off the lows of their chart patterns. The weekly chart of six of the biggest NASDAQ names reveal this general pattern. While Apple (AAPL) has rallied back above its 40-week moving average, Amazon.com (AMZN) and Tesla (TSLA) have pushed into 40-week moving average resistance where AMZN may play out as a short-sale entry. TSLA has already reversed at its 40-week line, corresponding to the 200-day line on the daily chart, and triggered a short-sale entry at the line on Friday. The other three, Alphabet (GOOG), Microsoft (MSFT) and former semiconductor leader Nvidia (NVDA) mostly remain within the confines of bear flags as they bounce along recent 52-week lows.

As interest rates have risen over the past year financials have trended lower. Most recently these have engaged in modest oversold rallies when viewed within the macro-picture of the weekly charts. Normally, rising interest rates are bullish for financials, but slowing economic fundamentals may be serving as a greater weight for financials to overcome.

Some of the biggest percentage moves off the absolute lows have been seen in a variety of infinite-PE names, or Ponzi-Stocks as we refer to them. While the moves look impressive based on the percentage moves off the lows, most  of these names were sold down over 80-90% off their highs of last year, so such bounces are to be expected. We would not, however, conclude in any way, shape, or form that these patterns represent new leadership in a glorious new bull cycle.

Bear market rallies generally rekindle bullish sentiment as they fool even the smartest investors. We recall that after the follow-through day on June 2, 2000 following the DotCom Bubble Market top in March 2000, Bill O'Neil declared a new bull market based on the precedent of October 1962 when the market took off in a huge new bull market after the Cuban Missile Crisis had subsided. He was wrong, of course, as the market again rolled over later in the year on a brutal new down leg in one of the worst bear markets in history that lasted from 2000-2003.
If indeed a new bull market is starting we believe that the proper set-ups among new leaders with new thematic drivers will show up in good time. There is no need to force things unless one is nimble and agile enough to play swing-trades off oversold lows. For now, we believe this market is indeed mostly suited to short-term trading where we see little to nothing developing with respect to intermediate-term trends.
The Market Direction Model (MDM) remains on a SELL signal.