The VoSI Focus List is a compilation and reference list of stocks for which Pocket Pivot or Buyable Gap-Up Reports have been issued. It is not intended as a "buy list" or a list of immediately actionable recommendations. Stocks on the list may or may not be in proper buy positions, and investors should exercise discretion and proper judgement in determining when and where stocks on the Focus List can be purchased. The following notes are intended to assist in this process. Please note that members can enlarge the Focus List image by clicking on the body of the email and then holding the Control Key while pressing the "+" key until it is large enough to read.
General Observations:
A wild spin-out capped off what was an unusual week for the market. News that former National Security Adviser Michael Flynn would "testify against" President Trump sent the Dow Jones Industrials Index down over 350 points in a flash on Friday, pulling stocks across the board down with it and thoroughly negating the prior day's 331.67 point Dow romp on tax reform euphoria. As the news became clarified, it was determined to be more "fake news" from a biased media hell-bent on taking down the Trump Administration, and the market rallied back sharply. By the time the closing bell rang and dust had settled, the Dow finished the day down only -40.76 points, or -0.17%. The action was volatile, if not downright crazy. In the end, all it did was produce a big-volume shakeout.

Meanwhile, tech, internet and other growth names that were hit hard on Wednesday have only managed to bounce feebly or, in some cases, move lower. The action attests to the difficult nature of this market as we move into the December trading month. Investors must remain alert, as risk increases, despite the fact that the indexes remain near their all-time highs. At the same time, we find that fewer stocks are coming through our screens as mostly fundamentally lagging big-caps such as transportation names have been rallying. 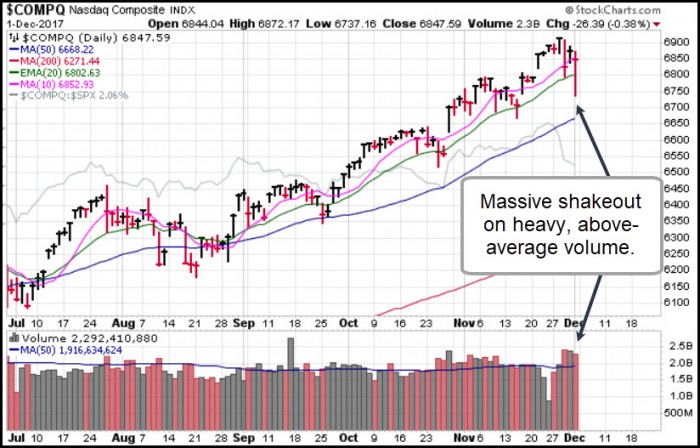 If the market continues to rally, and we see money continue to flow into laggard areas of the market, one area of interest could be medical/bio-tech names. We have seen pocket pivots recently in big-stock bio-techs like Amgen (AMGN) and Biogen Idec (BIIB), as well as smaller names like Exelixis (EXEL) and Nuvasive (NUVA), for example. Unlike their big-stock bio-tech brethren. EXEL and NUVA are showing strong earnings and/or sales growth in the most recent quarter, EXEL is a small biotech focusing on small molecule cancer therapies that is actually profitable, and in the most recent quarter posted 26 cents in earnings, representing 999% earnings growth on 145% sales growth. EXEL posted a pocket pivot low-base range breakout on Friday. We show the chart of NUVA, below, which posted 30% earnings growth in the most recent quarter. 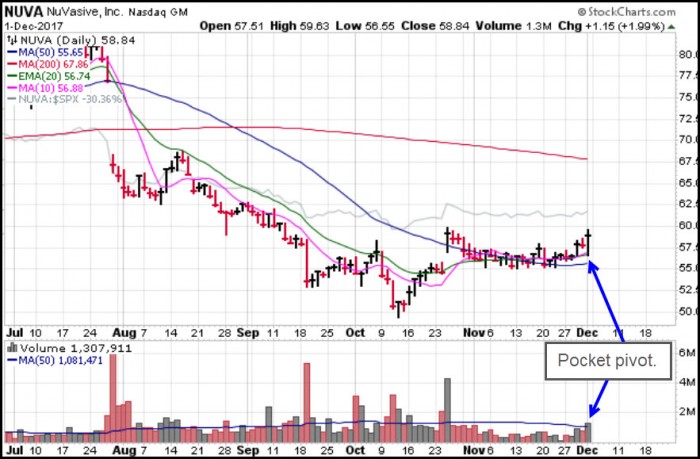 The Market Direction Model (MDM) is currently on a neutral/cash signal, reflecting the heightened risk. Should the market stabilize, and notable divergences begin to right themselves, the model will change  signal as necessary. We would note, however, that Wednesday's action would have resulted in entirely different experiences for Index ETF investors depending on whether they owned TECL or TQQQ, which were hit hard, as compared to DIA, SPY, or IWM, which were up or mostly unchanged..

Notable Action:
Focus List names remain under pressure, but in some cases may have become short-term oversold. Many also illustrate why we prefer to use the 20-dema as a selling guide as it gives us the luxury of raising cash and then being in a position to see how a stock acts as it potentially tests its 50-dma. Several names are fluttering about their 50-dmas, and should be watched for more decisive moves back up through the 50-dmas, which would trigger what we refer to as a "moving-average undercut & rally" type of long set-up as the stock regains the line. In such cases, one would use the moving average as a selling guide, ensuring that any failure would push one out of the stock very quickly.

The situation remains fluid, however, and in our view owners of these stocks who had purchased additional shares up near the recent highs should have already sold those portions of their positions, effectively lowering their cost basis and raising more cash.

Arista Networks (ANET) is correcting on heavy volume, but so far has been able to hold support at the 20-dema. It likely needs time to settle down after a strong 20%-plus run from the $200 price level in November.

Alibaba (BABA) made a new closing low on Friday, but remains above the intraday low of Wednesday's sharp decline. This looks problematic, however, and one should have sold on the breach of the 20-dema. At this point, if one owns the stock much lower and closer to the $100 price level where we first reported on the stock as a pocket pivot buy early in the year, a violation of the 50-dma could be used as a final selling guide.

Caterpillar (CAT) is now the strongest name on the Focus List, which is not surprising given its status as a big-stock machinery name, after breaking out of a five-week base on a pocket pivot move and then posting another pocket pivot signature as it found support at the 10-dma on Friday. This is a base breakout made for those who like to buy base breakouts, but was previously buyable along the 20-dema per our prior Focus List notes during the week. 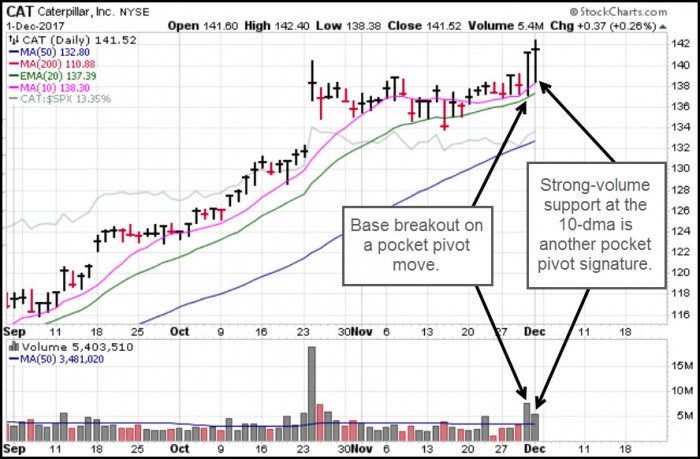 Facebook (FB) closed just below its 50-dma on Friday, but technically has not violated the moving average, despite dropping below its prior base breakout point. Selling volume has dissipated from Wednesday's high levels, so we would watch for a move back up through the 50-dma as a trigger for a new long entry. A breach of Friday's intraday low, however, would constitute a sell signal. 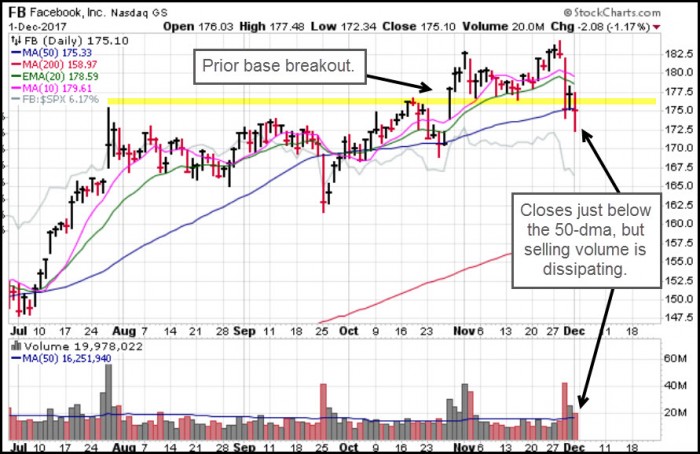 Netflix (NFLX) has also dipped below its prior cup-with-handle base breakout point, but selling volume declined on Friday to below-average levels. Technically, it has also not violated its 50-dma since it hasn't moved below the intraday low of Wednesday, three trading days ago on the chart, which is the first close below the 50-dma. 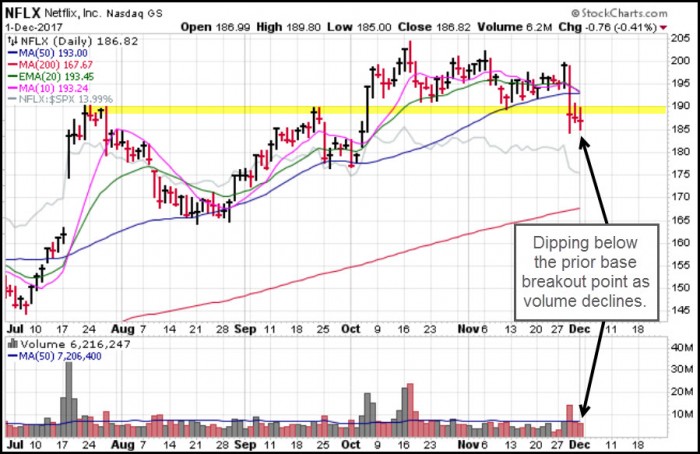 Nvidia (NVDA) is clinging to the underside of its 50-dma, and so far has not violated the 50-dma. Its position is somewhat similar to FB as it has not technically violated its 50-dma just yet. This is a fluid situation, and a move back above the 50-dma could trigger a long entry using the 50-dma as a selling guide. 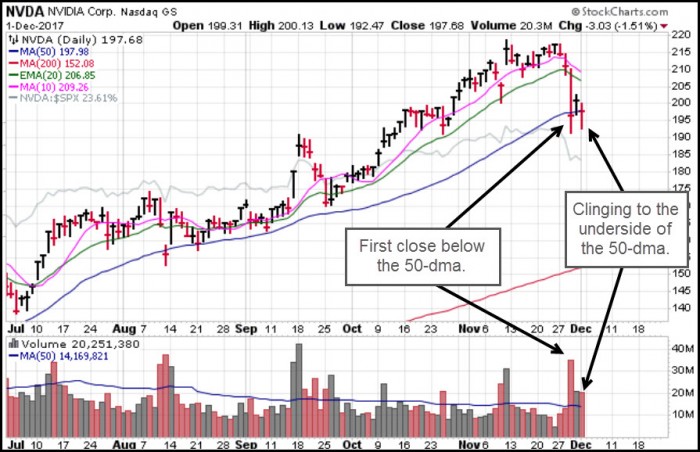 Take-Two Interactive (TTWO) retested its 50-dma on Friday and bounced off the line. This brings it into a lower-risk buy position on the pullback, using the 50-dma as a selling guide.

Weibo (WB) looks set to test its 50-dma as it has now pulled back to the mid-point breakout level of its prior double-bottom type of base. Chinese names have been under pressure lately, as has been the case with BABA as well, and WB needs to hold the 50-dma to remain viable. In our view, the failure to hold the 20-dema was sufficient cause to back away from the stock. 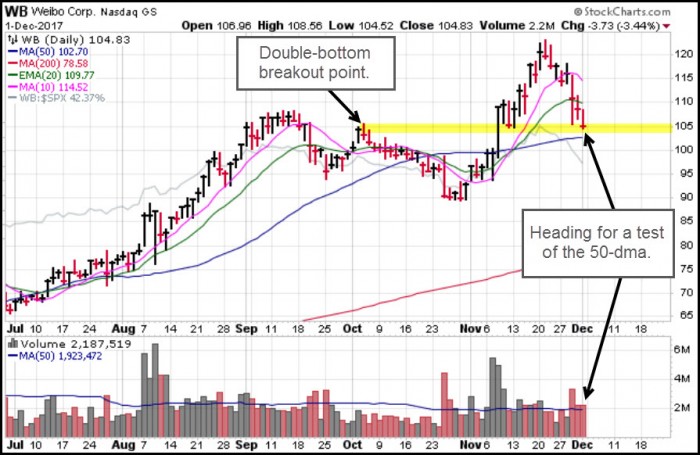