The Dow Jones Industrials remains the leading index as it pushes to higher highs above the mid-August peak. An early sell-off on Friday following a strong Establishment Survey jobs gain of 263,000 vs. expectations of 200,000 and hourly earnings growth of 0.6% vs. expectations of 0.3% triggered the sell-off but the market eventually found its feet as the Dow bounced smartly off near-term support at the 10-day moving average. 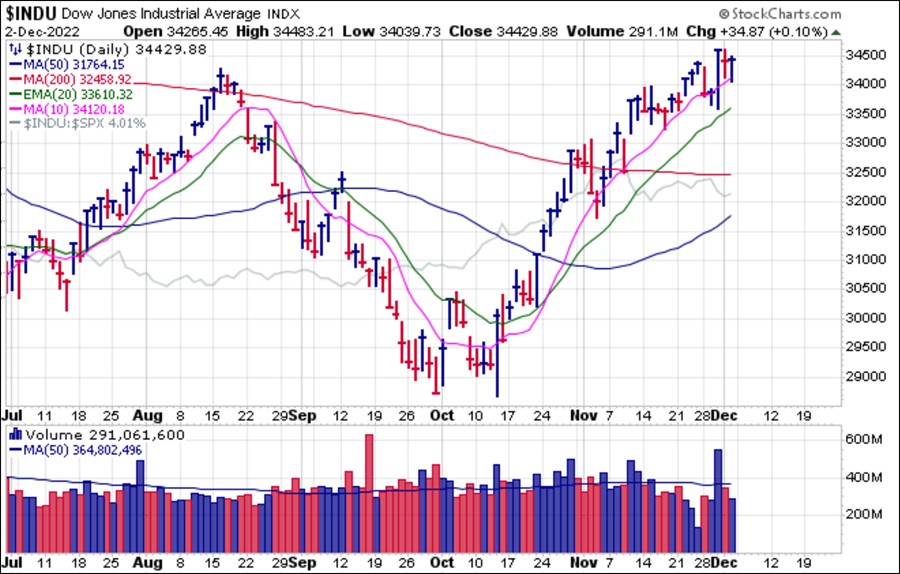 The NASDAQ Composite lags as it remains well below its 200-day moving average and the mid-August highs. When technology lags, it is typically an indication of weak internal in the overall stock market. New bull markets do not begin in such instances as it shows the market remains in a defensive risk-off posture. 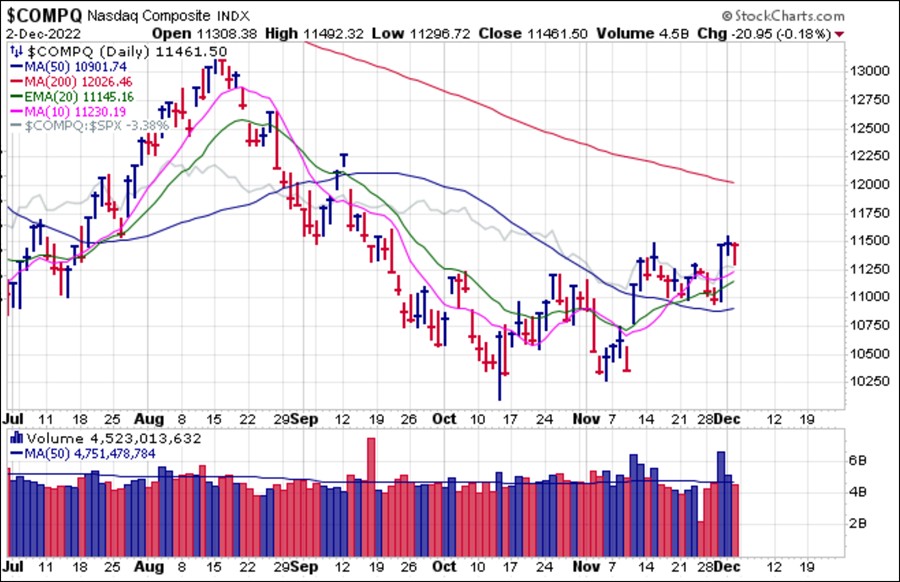 Meanwhile, the S&P 500 splits the difference as it has now cleared its 200-day moving average but remains well below the mid-August peak. 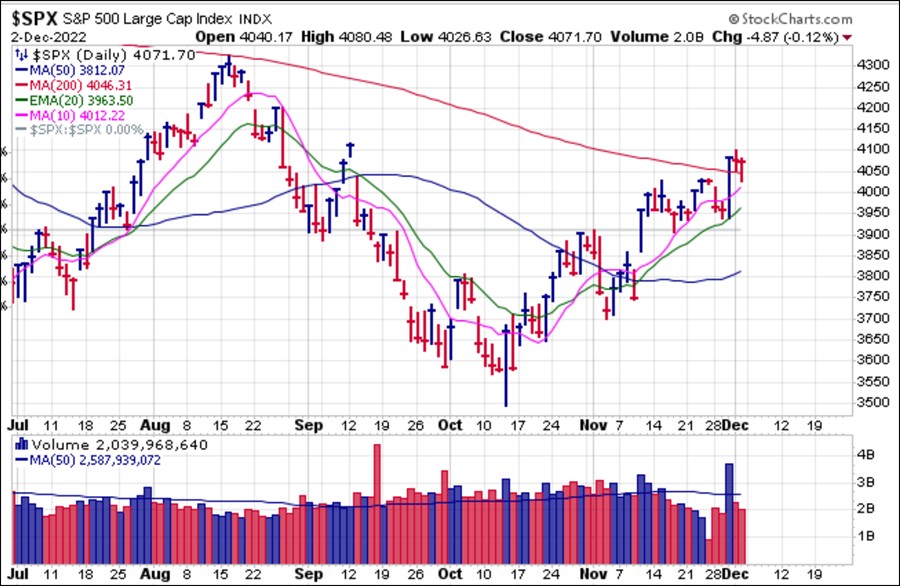 Interest rates as measured by the 10-Year Treasury Yield ($TNX) and the U.S. Dollar ($USD) both made lower lows on Friday after initial rally attempts early in the day. This serves as near-term confirmation that the market is attempting to price in a potential Fed pivot. As we have noted, it was the market that began raising interest rates over a year ago as the Fed continued to fiddle the inflation is transitory line. In the same manner, as the Fed insists that it will keep rates high into as late as 2024 it is likely that the market will figure  out when the Fed is most likely to pivot long before the Fed does. History shows that the Fed funds rate typically follows the market. This is the first time due to record level debt, record low interest rates, and soaring inflation that the Fed had to hike rates despite the major averages trending lower all year. Expect consequences of eventual new lows sometime in the first quarter next year unless we get a black swan which forces the Fed to launch QE5.

As the Fed Pivot Theory, essentially the idea that the market will figure out when the Fed is going to start reversing its current hawkish policy long before the Fed does, remains in force, the precious metals space remains robust. Gold and silver ended the week at higher highs with both the Sprott Physical Gold Trust (PHYS) and the Sprott Physical  Silver Trust (PSLV) finishing at weekly highs after posting pocket pivots on Wednesday. We have preferred the white metal and so issued U&R reports on the PSLV in October and November. Silver is up 24% from the October lows while gold is up 11%.

We previously reported on silver miners First Majestic Silver (AG) when  it posted pocket pivots lower in its pattern back in early November. It has since moved higher and has formed a short flag formation along its 200-day moving average with support along the lower 20-day exponential moving average. AG posted a strong-volume pocket pivot on Thursday and then tested the 20-dema again before finishing positive on Friday. This is within buying range here using the 20-dema or 200-dma as selling guides depending on one's risk preferences. 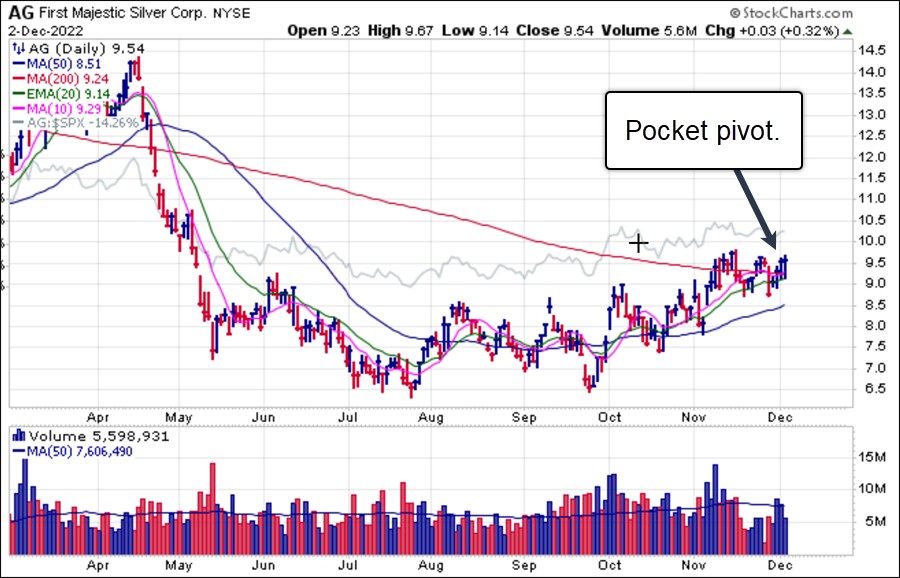 Gold miners and related names also look constructive. AngloGold-Ashanti (AU) posted a pocket pivot flag breakout on Thursday and held along higher highs on Friday. We like this on pullbacks to the 10-dma. Gold Fields (GFI) is holding right along its 10-dma and 200-dma with pullbacks to the 10-day line being buyable and pullbacks to the 200-dma even more opportunistic as potential lower-risk long entries. That said, GFI is within buying range here as it holds tight along the 10-dma using the 200-dma as a maximum selling guide. Institutional favorite Newmont Corp. (NEM) posted a pocket pivot on Thursday and is slightly extended from the 10-dma. Osisko Gold Royalties (OR), which owns gold production streams rather than mining the stuff itself, posted a pocket pivot on Thursday and remains within buying range using the 10-dma or 20-dema as selling guides. 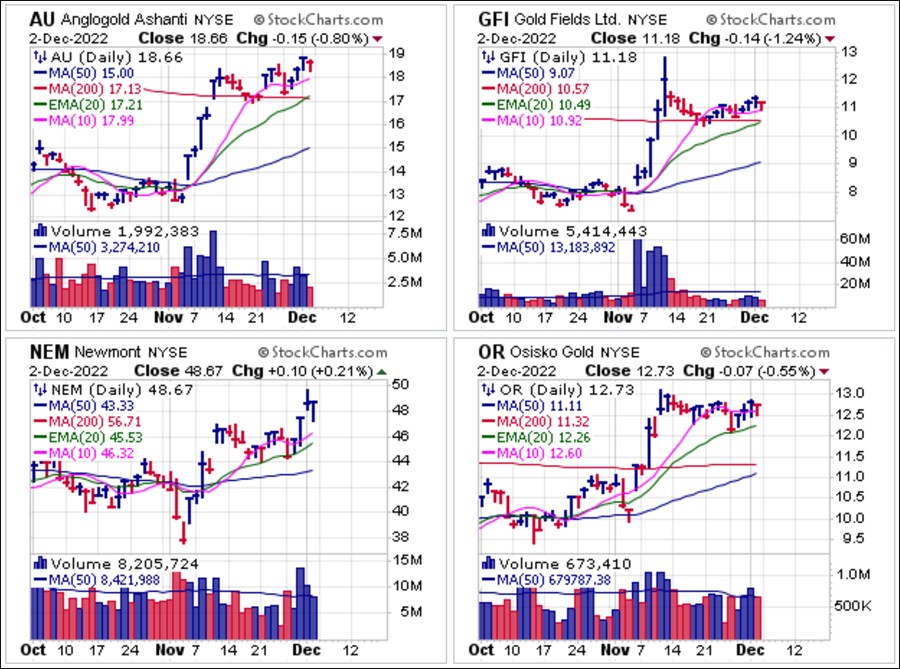 The Market Direction Model (MDM) remains on a SELL signal.